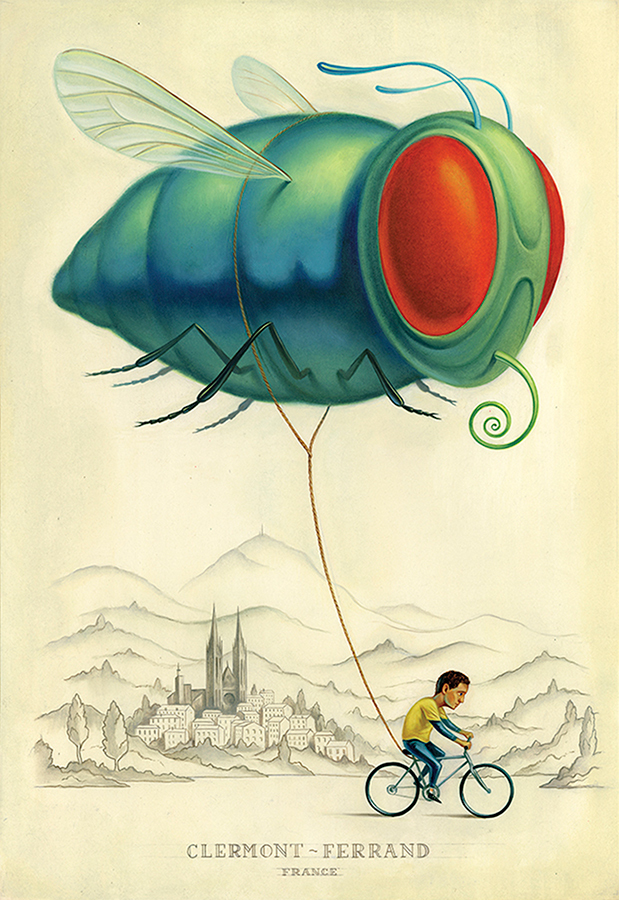 I finally got a chance to sit down and post about my project in France. It took some time to edit and unpack the whole experience.

Last year I was asked to judge the 2013 Clermont-Ferrand International Short Film Festival and they also commissioned me to work on the festival’s poster for 2014 festival. Why an illustrator judge for a film competition? For the past 29 years, Antoine Lopez, co-founder of the festival, created the wonderful tradition of asking an artist/designer/illustrator to jury and create the poster for the following year’s festival. I was proud to be one of the few Americans to have been chosen and to join past poster artists: Brad Holland, Dave McKean, Lorenzo Mattotti and many other international artists.

Brad HollandsÃ¢â¬â ¢ 1999 poster above left was one of my favorites from the past festivals.

To my surprise this festival is the second largest film festival in France, after Cannes, with over 100,000 annual attendees. Clermont-Ferrand is a cool little city in the middle of the Auvergne region of France about 250 miles south of Paris. It is filled with medieval dark grey buildings and cathedrals made out of volcanic rocks from the ancient volcanoes that still surround the city, and, of course, incredible food. I overdosed on galettes (similar to crepes but made with buckwheat flour) and unpasteurized cheese from the local market! 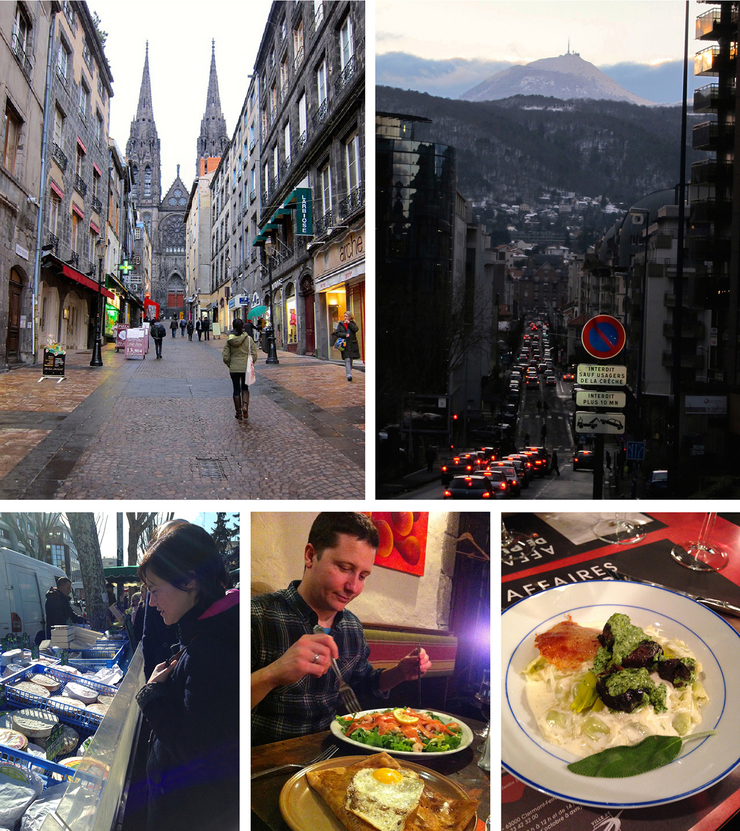 During the week-long festival in 2013, I watched over 90 short films in the “Maison de la Culture” theatre, met some incredible film-makers from around the world and learned about a whole new art form—short films. I’m greatful to the jury of film directors who kindly accepted me as one of their peers. Thankfully the discussions about the films had many correlations to my experience judging illustration contests. And at the end of the festival there was a grand Oscar like ceremony where I had the honor of announcing some of the winners.

2014 film festival closing ceremony (above left). Announcing some of the winners at last yearÃ¢â¬â ¢s closing festival (above right).

So after returning from 2013 trip, I started to work on the poster. The initial inspiration for the poster was based on the Mexican short film that won the top Grand Prix called “Para Armar un Helicoptero.” This film directed by Izabel Acevedo was an entrancing live action film set in an apocalyptic Mexico City. It was about a boy and his bike and his struggle for electricity and hope. There was something about this boy’s ingenuity and creativity of keeping the lights going that directly related to the idea of a filmmaker and their filmmaking journey. Flies were also a recurring element in her movie and it just stuck with me.

Thank you to Antoine Lopez for the perfect amount of art direction and freedom for this project. 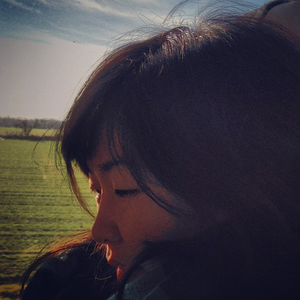 After turning in the final art, they asked if I wanted to attend next year’s film fest and offered me a solo gallery show hosted by the regional government - le Conseil General du Puy-de-Dome.

Fast forward to 2014. SooJin and I landed in Paris for a few days and took a train down to the filmfest in Clermont-Ferrand (SooJin on train pictured right). I was excited to revisit the city, but also a little worried. I had read on few blogs and social media sites that the locals were a bit miffed about this “fly” representing their city and the filmfest. And there was lengthy discussions about it in french of which I’m sure it got mangled in Google translate.

But when we arrived in town, we soon noticed that my poster was everywhere. It was on billboards, shop/cafe windows, local wine labels, bags and the town even made official “fly” postage stamps. I tried to grab a ‘fly’ hat but they were sold out. It was really good to see it all come together.

My “fly” had taken over the city and the best part was that the city seemed to embrace it. I heard from the heads at the festival that it was one of the most popular posters and they had sold out many of the items. Many locals and festival attendees wanted to know “pourquoi la mouche?” (“Why the fly?”) I asked what they thought instead and I got back so many interesting answers. For me, the boy on the bike represented the film-maker and the fly their unique creation/flim that they were bringing to the festival in Clermont-Ferrand. 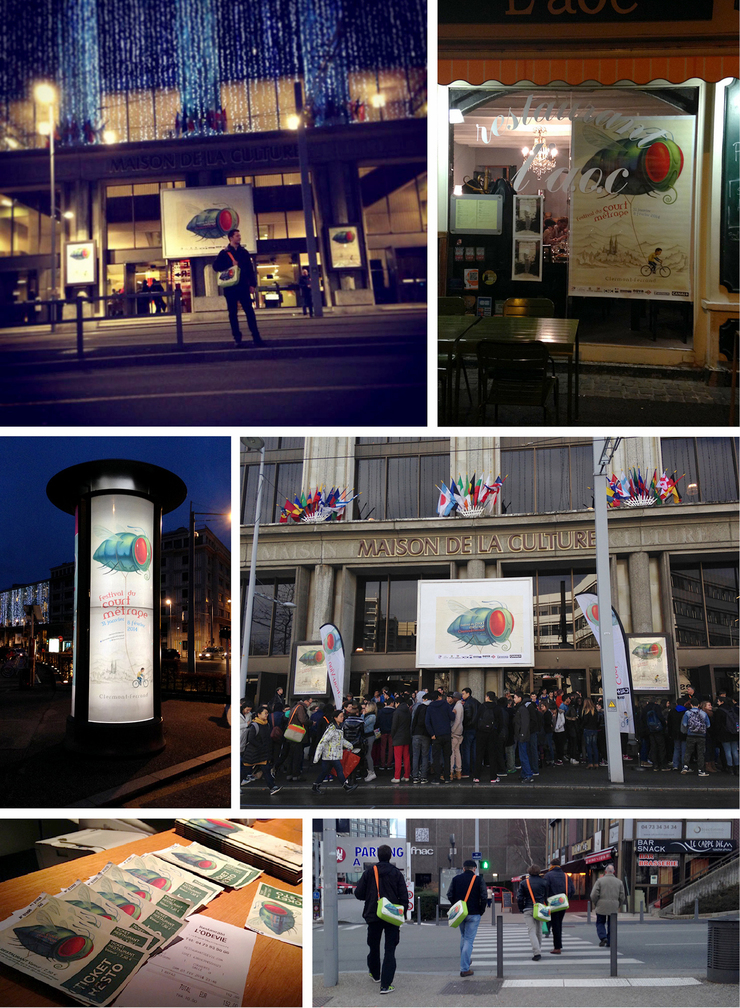 The festival usually gives many of the nominated film-makers a stipend of money to spend in town during their stay. This year they decided to print the money with my fly image on it. I was paying for dinners with my own money! Crazy! (above bottom left)

They were selling the Ã¢â¬ÅflyÃ¢â¬Â hats, bags, local wines, beers, bags, and even post stamps (can use within Euro countries).

The solo show took place in a beautiful round glass building in the middle of the city. Because of certain restrictions I decided against shipping original work and instead made oversized prints. During the week, I did some lectures and signings at the show. I met many of the locals and school kids. I couldn’t have done it without my handlers, Xavier and Calmin. And special thanks to sweet Isabell who set up all the class visits and talks during the show. And to the many translators (especially to Thibaud) who made me sound much more eloquent in French.

Left picture of me and Alex: Thank you Alex (a.k.a. Shout) and Camilla for coming all the way from Milan to hang out with us. Right picture: Local attendees who stopped by the show with Isabelle (second from right) who orgazined all the school visits. 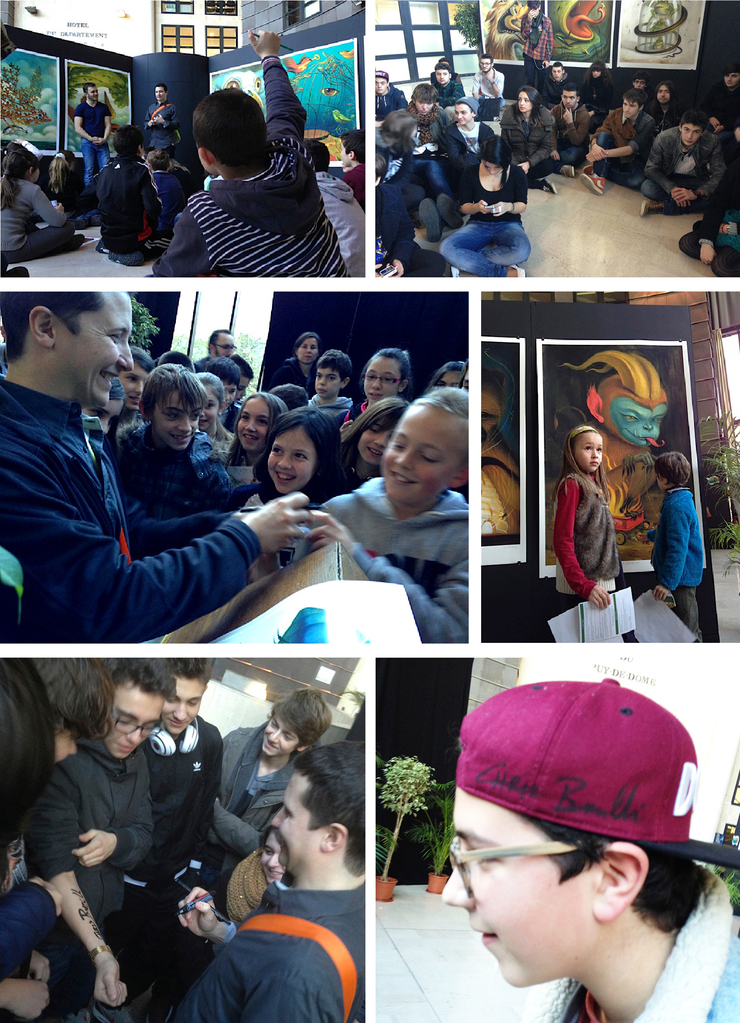 I met a lot of french students who came to see my show and talk. The young ones wanted me to re-assure them that Krampus wasn't real! I signed posters, arms, wallets and hats.

I thought the opening show was just going to be me and a few attendees from the festival. But it turned out to be a much larger event than I could have imagined. The caterers had designed the food around Americana theme serving mini burgers, mini hot dogs, mini apple pies, popcorn and donuts. On top of that they even had a five-piece band playing American songs all night. It all seems like a distant dream right now but it was an incredible night to remember. 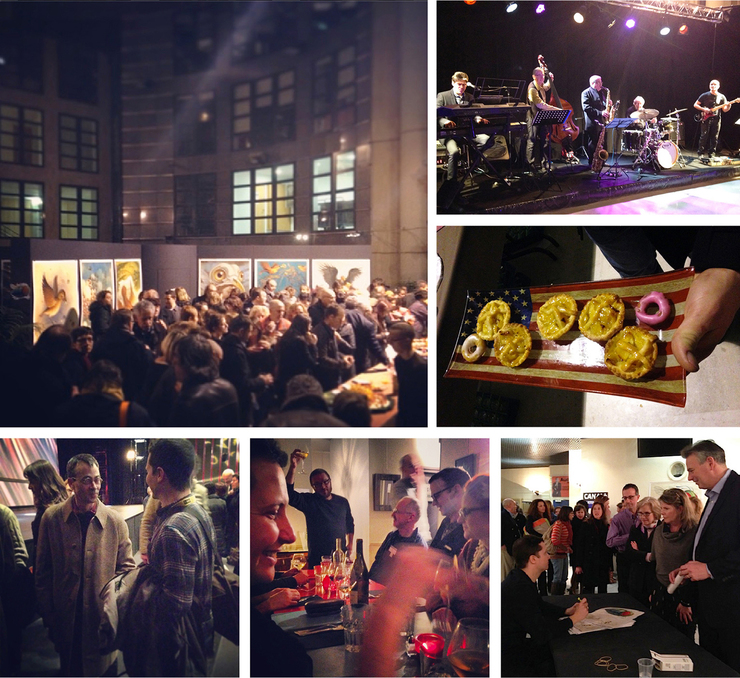 So thrilled to meet Blexbolex who was part of this yearÃ¢â¬â ¢s jury and is working on next yearÃ¢â¬â ¢s poster (above bottom left).

Thank you to In Efecto for animating my poster. I'm glad I got a chance to meet them at the festival and tell them how much I appreciated it. 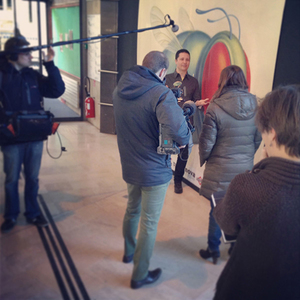 I really felt like a rock-star for a week in the middle of France and I can’t thank them all enough for this experience. Especially to my good friend Antoine Lopez and his family.

I’ve been very fortunate to have some of my illustration projects turn into incredible experiences and this definitely was one of them.