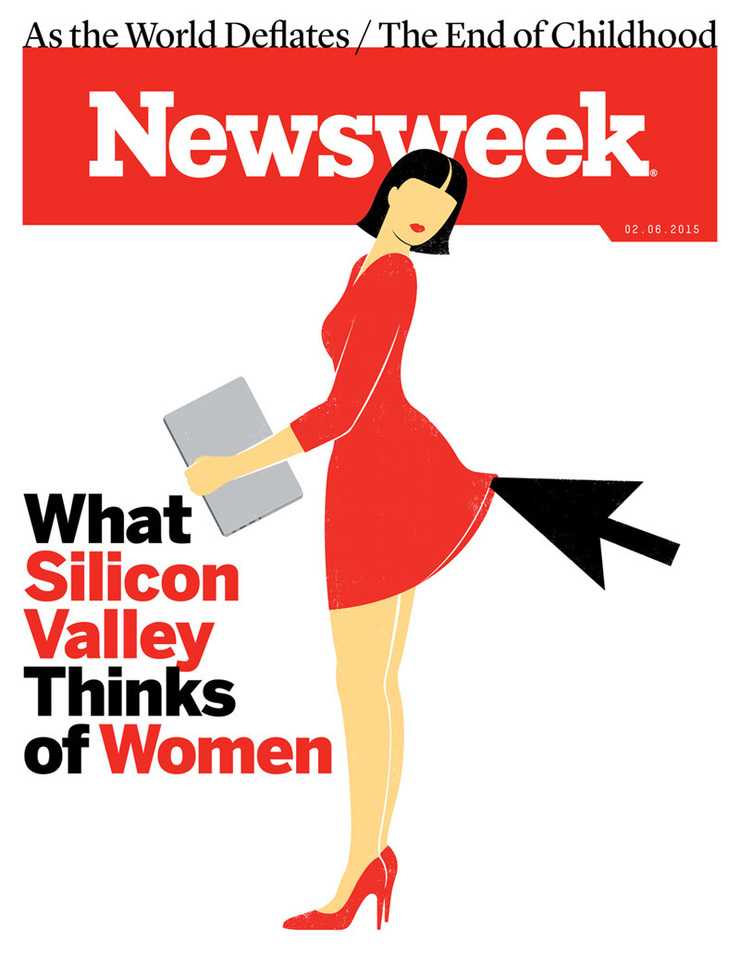 This is my new cover for Newsweek, it's been in the news and received commentary, both positive and negative, online lately.   The cover story can be read online here.  Glad it started a conversation on the topic, as all covers should.
Here are interviews I gave to Katharine Zaleski, the President of a woman owned Tech Company in Silicon Valley, "PowerToFly", and to the PBS NewsHour:
---------------------------------------------------------
PowerToFly:
Yesterday I interviewed Edel Rodriguez, the artist behind the Newsweek cover that has people tweeting in shock and exclaiming their outrage on the nation’s morning shows. As the cofounder of PowerToFly, the first platform that places women in tech positions they can do in offices or from home, I’m glad Rodriguez’s cover has generated a conversation that is too often considered a side issue despite sexism’s effect on fifty percent of the world’s population. My own theory is that  Rodriguez is confronting us all with a raw and very unpleasant image of the Valley that’s applauded for creating the world’s most progressive companies when, in fact, women are calling it a place stuck in the 1950s. As someone who used to write about the Valley’s “innovative spirit” as a journalist, the cover makes me feel disgusted with myself for celebrating a culture without questioning its disparities. What follows are Rodriguez's answers to my questions over email.

First of all, congratulations on creating a cover that people are really talking - or freaking out -  about. How do you feel about all the reaction it's getting? Part of my job is to help make that happen.

I think the reaction is good.  It’s an important topic at this point in time, it’s great when people are compelled to discuss the issue in one way or another.

You have done illustrations on many divisive topics like gun control, the turmoil in the middle east, and race in America. Have any of your other pieces caused such a strong reaction?

I’ve been illustrating for about 20 years and have had thousands of images published.  There have been a number of images that have gotten reactions during that time, but the reactions were through letters or blogs.  Reactions are exponentially different nowadays because everyone uses Twitter, Facebook, etc. That’s a relatively recent form of commenting on imagery.

Your work is being called "sexist"... When it's an article about sexism... It’s kind of getting killed as the messenger here, no? We know what people in the media and on Twitter think, but have any of your colleagues shared their reactions?

Most of my colleagues, both illustrators and art directors, love the image and think it’s an accurate representation of the story.   They work with controversial topics every day and have a good sense of how to portray complex topics.  They understand that our job is to provoke the viewer into reading a story.

Why did you choose to use an image of a woman's skirt being lifted? I’d love to hear your thought process around creating the cover a little bit more.

I wanted to depict the harassment that women suffer.  How the harassment can be unexpected and come out of nowhere.  To show that frozen moment of shock, when a woman is just going about their life at work and something like this happens.  I wanted to have the viewer see that moment when they look on a newsstand, and to be shocked themselves.  Then be compelled to pick up the magazine and read the story behind the cover.   These harassers have spent much of their lives behind a computer, seeing women as objects.  I wanted them to be confronted with their stupidity as well.  Hopefully by seeing it there, frozen in time, they could come to terms with what they are doing.

When you were creating this cover did you get any direction from Newsweek beyond the content of the article? And this might seem like a silly question but many of our readers might not know the answer - were you able to read the entire article before you worked on your illustration?

Yes, I was given the entire article and read it before starting my sketches. There was no direction on images.  I came up with the ideas and the art director, a woman, felt that this one fit best with the point of view of the story.

I'm curious what you thought about the actual article written by Nina Burleigh. As a woman who recently raised a seed round for PowerToFly with my female cofounder Milena Berry, I found the stories about women struggling for funding to be beyond sad and discouraging. Luckily we didn't have the same experience. But considering the article maybe you should have done an image of a woman having to grope a man with one hand and ask for money with the other?

It’s a great article that describes a disgusting pattern of behavior.  I have two daughters, ten and five, who love technology and I don’t want them to have to deal with this in their careers in the future.   As to your idea for an image, you stick to Tech, I’ll make the pictures, ok?  Kidding!

After this experience what would you say to your media colleagues in general about their analysis of your work? I saw a Today Show host call the cover “obscene and just despicable, honestly” (and then she mentioned she had never read the piece). Over a year ago, I saw this same host comment on a segment about Miley Cyrus twerking at the VMAs. She offered no opinion except that she didn’t know “what to think.” Yes, I’m alluding to a double standard where we pin up barely legal actresses as sex symbols and then are aghast when someone illustrates sexism.

Television media is hyper and sensationalist for the most part.  I can’t take a bunch of talking heads on the Today show seriously.  Does anybody?   One moment they’re outraged about this supposed sexist image and the next segment is about ’50 Shades of Grey’ followed by a ‘hot new swimsuits’ segment.  It’s too ridiculous to even consider.  I’ll read articles or comments by people whose opinions I respect, that I’ll do.

Does this firestorm mean that print is not dead? Or at least print covers?

PBS News Hour:
Newsweek’s current cover story on sexism in Silicon Valley is getting negative attention for dressing up what it defiles: unequal footing for women in technology.
The cover was ridiculed as “desperate/inappropriate/offensive” and described by a national TV host as “despicable.” But many defended its intent, including the cover story’s author, Nina Burleigh.
“The cover illustrates disgusting behavior that has been described in literally hundreds of easily available tweets, blogs and articles online as well as in the many interviews I conducted with women,” she told PBS NewsHour.
In Burleigh’s article, she fleshes out the stereotypes behind Silicon Valley’s legends, who she describes as being unimpressive physically but capable of walking into venture capital firms and leaving with a million dollars. Presented in parallel are the many women who have reached for the same support who were not rewarded because, as Burleigh suggested, they are lacking “the sine qua non of the fabled Silicon Valley startup”: penises.
Burleigh’s article investigated why this disparity existed, but her reporting was lost on “Today Show” host Tamron Hall, who said she hadn’t read the article but “you want to rip the cover off.”
“Where were all these offended people when women like Heidi Roizen published accounts of having a venture capitalist stick her hand in his pants under a table while a deal was being discussed?” asked Burleigh.
Artist Edel Rodriguez, who was TIME’s art director for Canada and Latin America from 1994 to 2008, created the provocative cover and discussed his process at length on Facebook. PBS NewsHour spoke to Rodriguez today.