OCTOBER 31, 2017
Two years ago I capped the longest deadline of my career by painting a picture I agreed to do in 6th grade.

It was a portrait of the religious leader Martin Luther, done for Resilient Reformer, an intellectual biography of Luther by Timothy F. Lull and Derek Nelson. 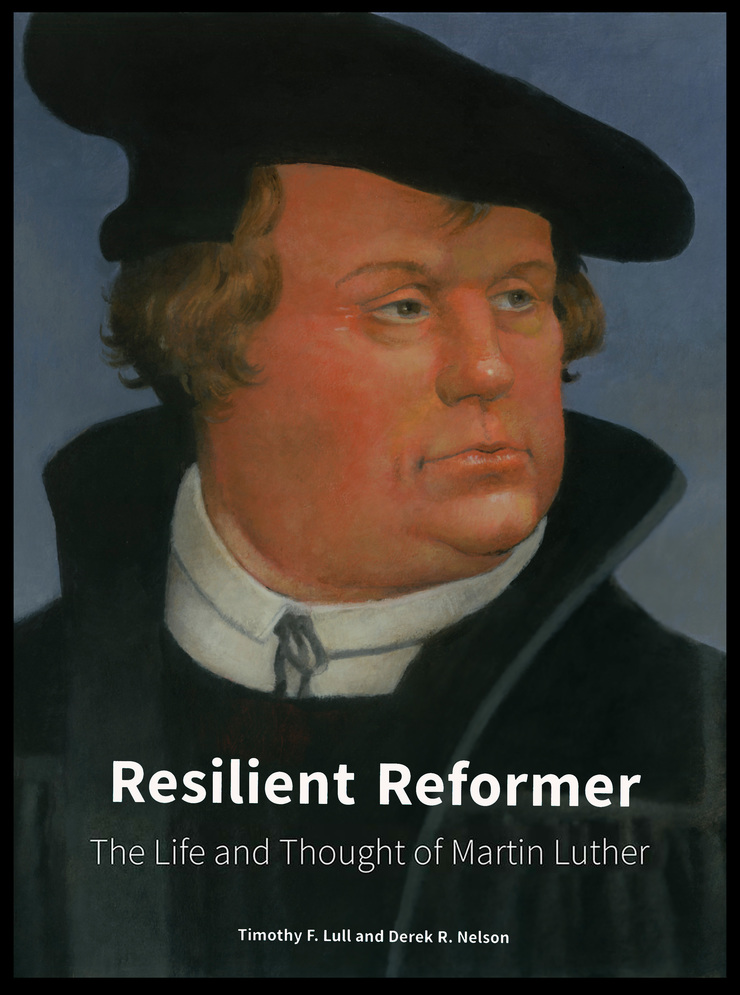 Tim Lull was president of the Pacific Lutheran Theological Seminary in Berkley, a distinguished Reformation scholar and a beloved theology professor there.

I knew him better as a kid I met in 4th grade.

Tim and I were the best of friends from the day we met until we graduated from high school. And although we went our separate ways after that, we stayed in touch for the rest of our lives.

Tim's life, unfortunately, ended in 2003 and his book, left unfinished at the time, was finally completed in 2015 by Derek Nelson, a former student and an author in his own right, with the blessing and encouragement of Tim's wife Mary Carlton and his sister Patricia.

I'm grateful to the women in Tim's life for making it possible for me to turn what years ago had been a silly childhood commitment into a last reunion of sorts with one of my oldest friends. 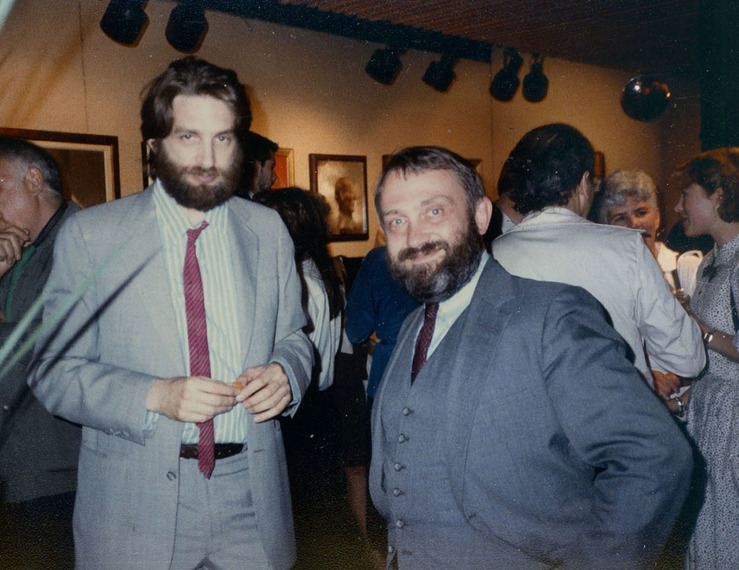 For two guys who had such a close relationship during our early years, Tim Lull and I never had very much in common.

To look at us, we resembled Slim and Slam. And as kids, at least, I always thought of Tim as in indoor guy, while I was never home before dark and not always then.

Tim came from a very religious family. I didn't. He grew up in a house full of books. We didn't have any in ours.

Tim was the only boy in his family, sandwiched in between three sisters; I was the eldest of three brothers.

We weren't alike in very many other ways either. Tim was a dedicated student, lived in a big frame house on a beautiful tree-lined street and every evening went home to hit the books. I lived in a cheap pre-fab in a treeless development on the edge of town and in twelve years of public schooling I can't remember ever doing homework.

In 6th grade Tim was voted the most intellectual boy in the class. 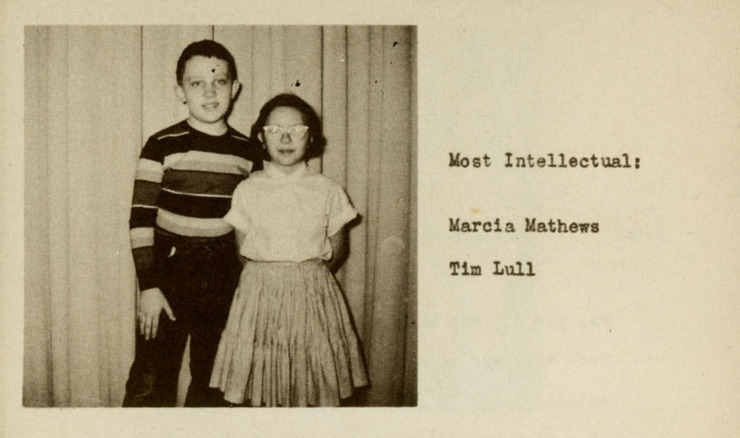 I was voted the shiest. 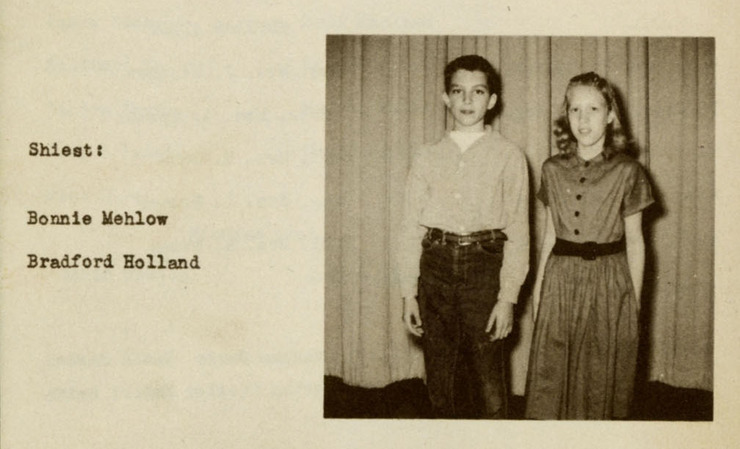 Tim was always good-natured and gregarious and it showed in every picture ever taken of him.

I was as hard to capture on film as Bigfoot, and sitting me down on a wooden milk crate in a grubby grade school storeroom with a white backdrop and pleading with me to smile was a sure way to turn me into Buster Keaton. 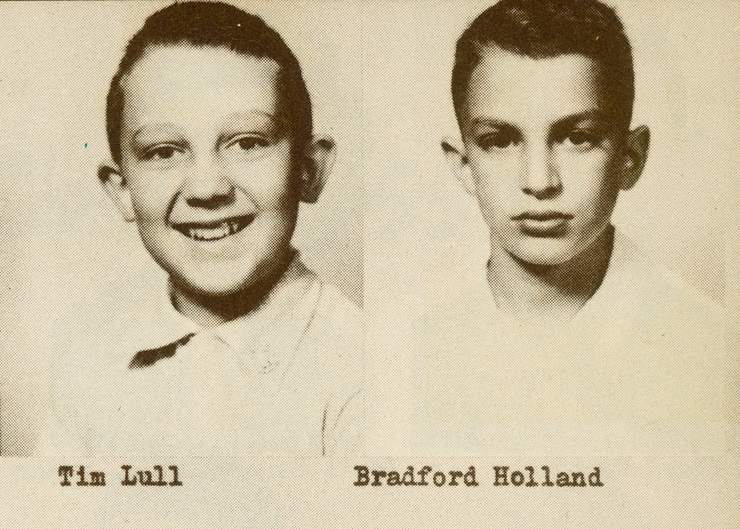 By 6th grade Tim was already planning to write a book about Martin Luther. And since it seemed to be everybody's guess around Atkinson Grade School that I was going to grow up to be a famous cartoonist of some kind, Tim made me agree that I'd do a portrait of Luther for the cover.

I said I would, although at the time I thought it more likely that I'd be growing up to draw Donald Duck. 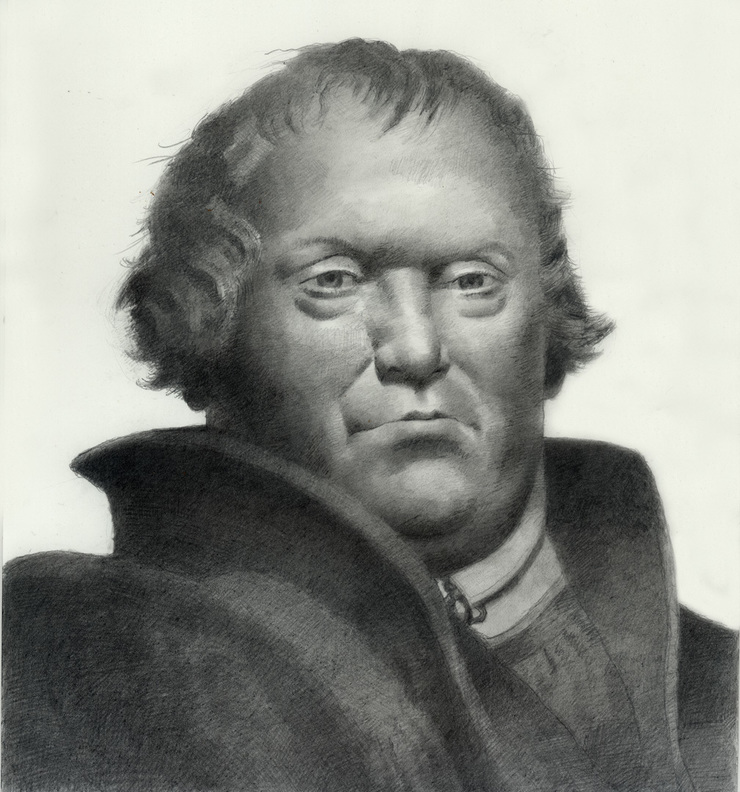 In high school, Tim joined nearly every club he was eligible for. I signed up for a few, but never attended meetings unless I could draw or write something, or maybe perform.

In 7th grade, under the misapprehension that I was part Cherokee, I started an Indian dancing group and began several years of performing at local Boy Scout camps throughout Ohio and Indiana. Tim was the first guy to join my troupe and the first to quit. Of all the things Tim Lull was ever cut out to be, this was not one of them. 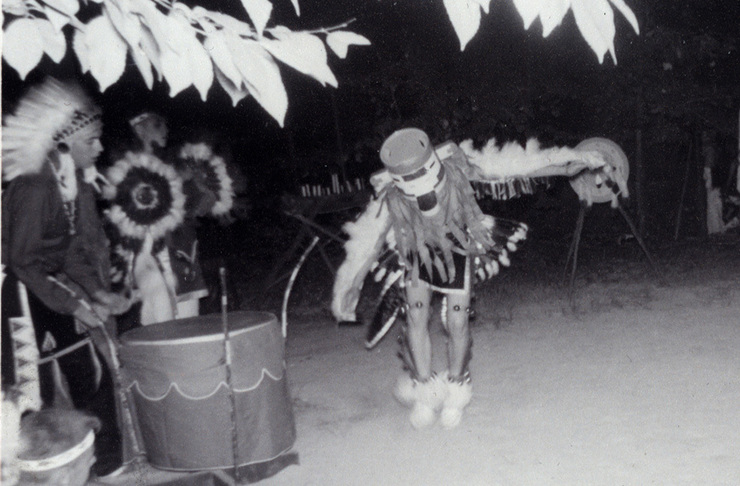 A few years later, we were both picked to attend the International Boy Scout Jamboree at Valley Forge. At the big televised program that closed the event that year, I performed on stage with a troupe from Cincinnati, while Tim got his first professional writing credit that summer sending home daily letters about our doings for the Fremont News Messenger.

By the time we were Sophomores, Tim was already sending away for college catalogs and taking SAT tests "for practice." The reason, he said, was that at that age the scores wouldn't count and you could get the "test experience" under your belt for when you were a Senior.

He tried to get me to take the tests with him that year and was "outraged," as he later recalled, when I told him I had no intention of going to college.

I came from a poor family, I told him, and saw no reason to borrow tens of thousands of dollars so that I could pay other people to make me read books. I had been taking books out of the library since kindergarten.

In our Junior year, Tim and I both had roles in the Junior Class play: the Kaufman and Hart comedy You Can't Take it With You.

Tim played the grandfather of an eccentric family. I played one of the eccentrics. 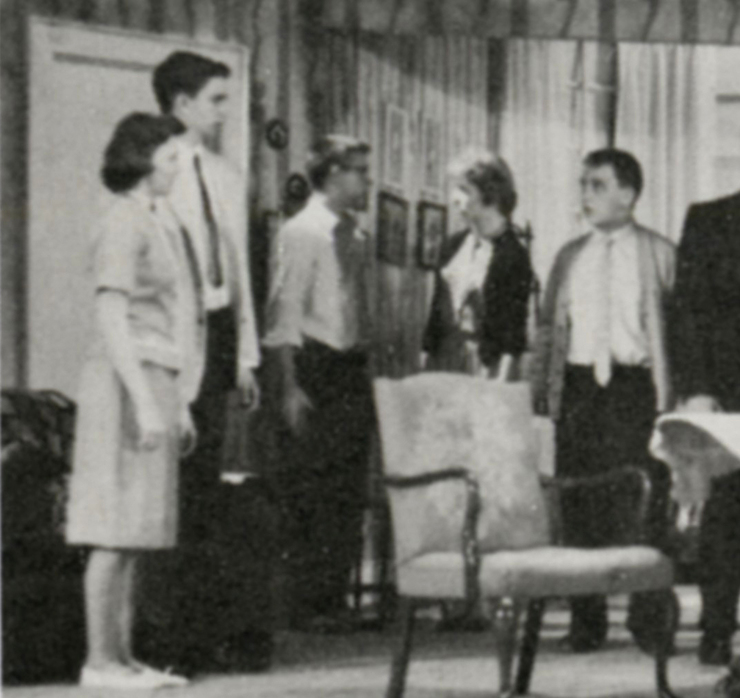 But then came graduation and we both headed off in different directions in life.

Tim left for prestigious Williams College and a great formal education; I left for Chicago and an education that has been decidedly informal.

By the time Tim entered Yale Divinity School I was doing regular work for Playboy and the New York Times. Then, for the rest of his life our paths crossed, but only sporadically.

In the mid 1980s I had an exhibition at the Society of Illustrators in New York. Tim and his wife showed up for a surprise visit from their home in Philadelphia. I think these are the last photos of the two of us together. 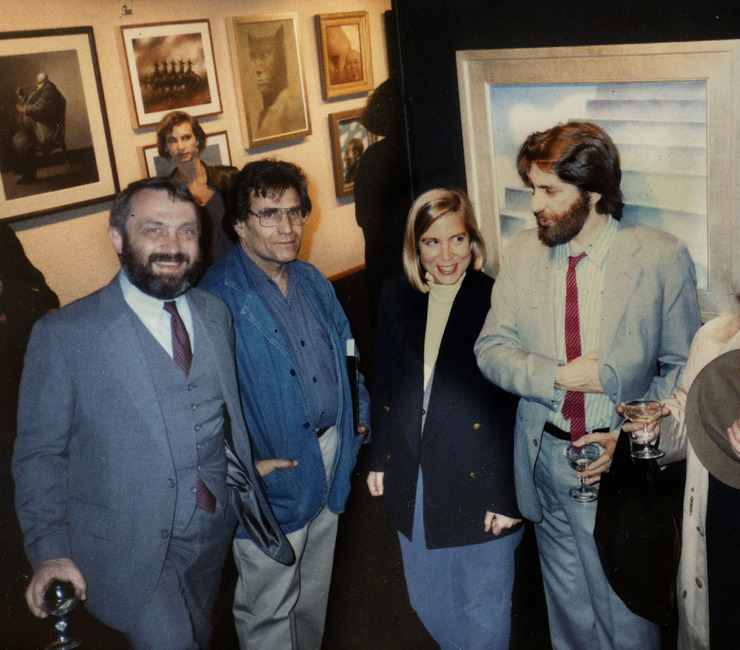 Tim's death in 2003 was a surprise too, sudden, unexpected and tragic. He left behind Mary Carlton, their two sons and of course, his sisters. He also left behind the uncompleted manuscript for the book he had been planning to write since 6th grade.

But as Derek Nelson, his former research assistant, writes in the Preface: "Tim had finished most of the research, much of the outlining and about half of the writing." Derek completed the project and at the direction of Tim's family, phoned me to ask that I do the cover.

I sent three sketches to the family and the publisher, and said I'd do whichever one they wanted to use. 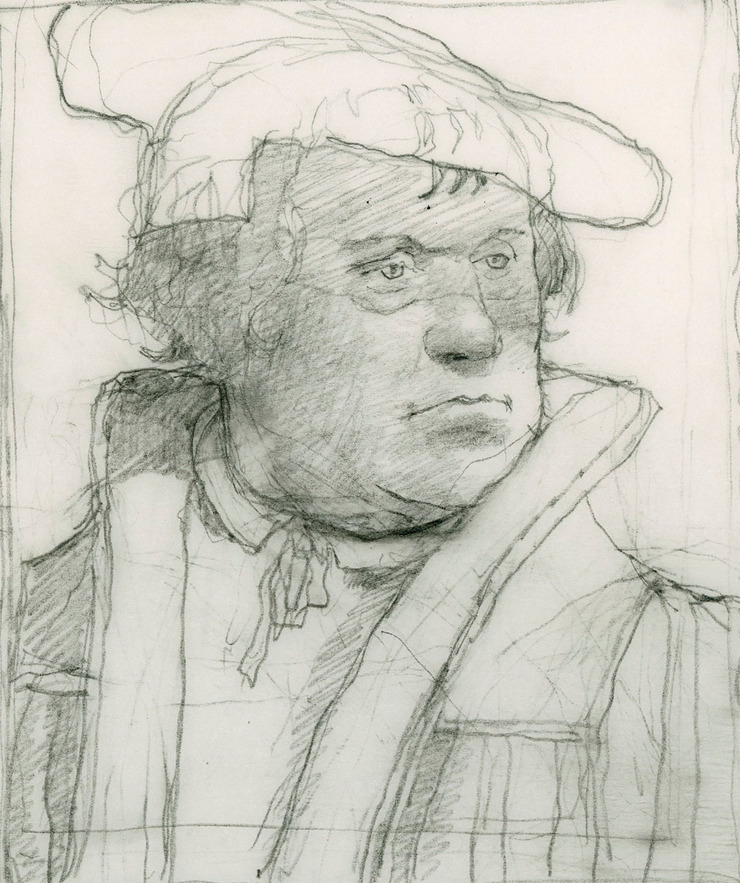 The first sketch was a drawing based on the painting of Luther by his friend, the artist Lucas Cranach. It's the only portrait of the man, I believe, that was ever done from life. 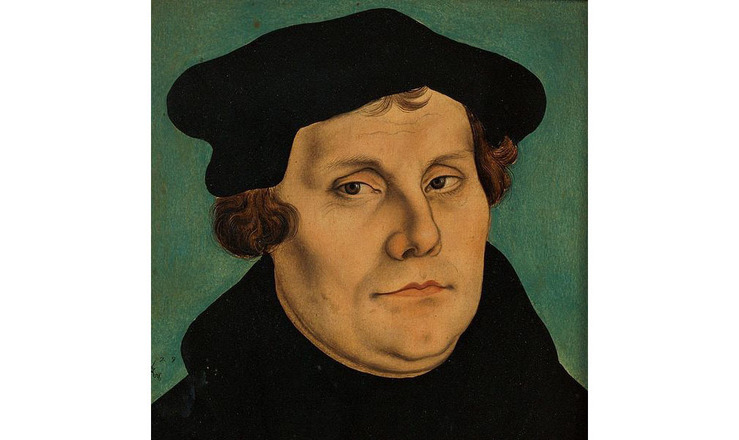 In the other sketches (which I preferred), I tried to capture some of the dramatic mood that framed the life of this one-time priest whose bombshell 95 Theses, allegedly nailed to the door of Wittenberg Cathedral 500 years ago today, splintered the Catholic (the word Catholic means "Universal") Church, and set in motion the creation of the modern European nation states, and whose novel conviction that each person should be free to interpret scripture for himself helped create our modern concept of individuality. 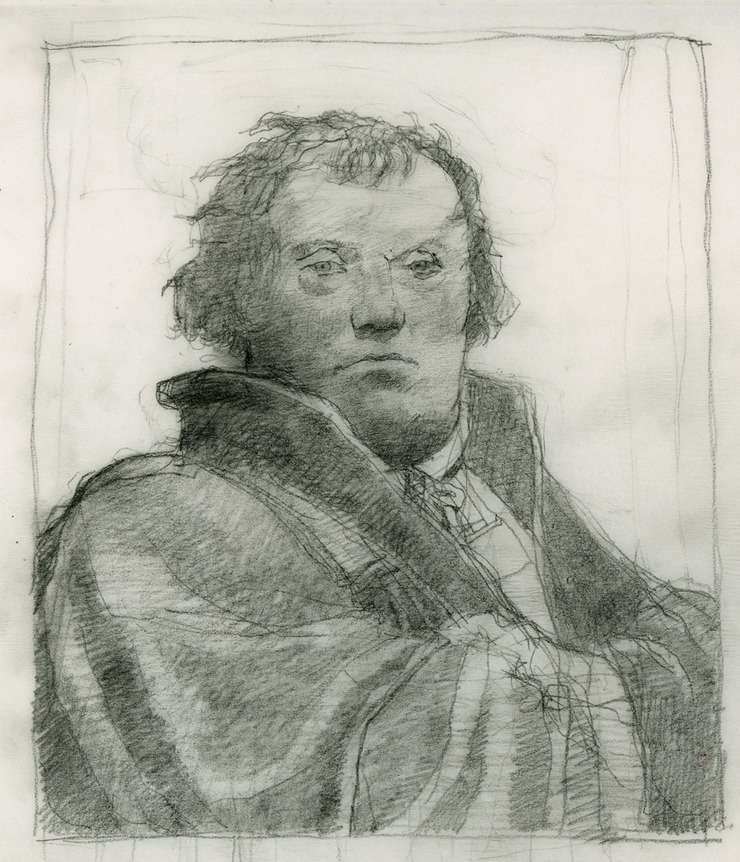 There's little doubt that Luther, like Kepler in the field of science, was a watershed figure of the last thousand years and I wanted to suggest both his own passion and the passions he stirred with his rupture of the established order of the West. 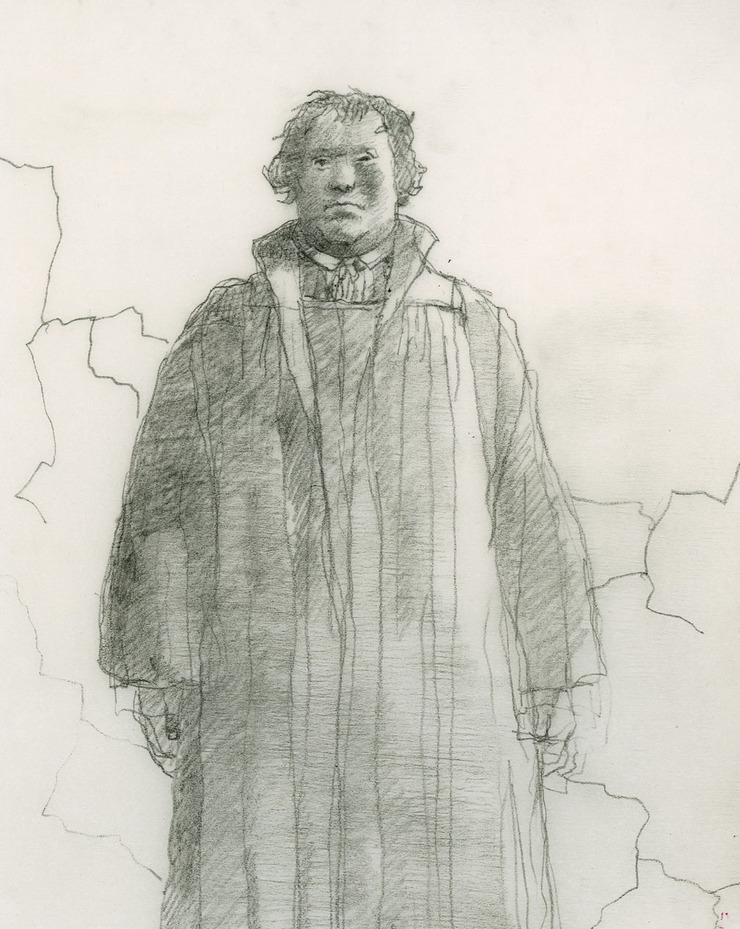 The publisher, however, went with my first sketch and I wasn't surprised by their pick. It was the safe choice and I was fine with it. But I volunteered to do one of the other sketches as a finished pencil drawing if they'd include it as a Frontispiece in the book. 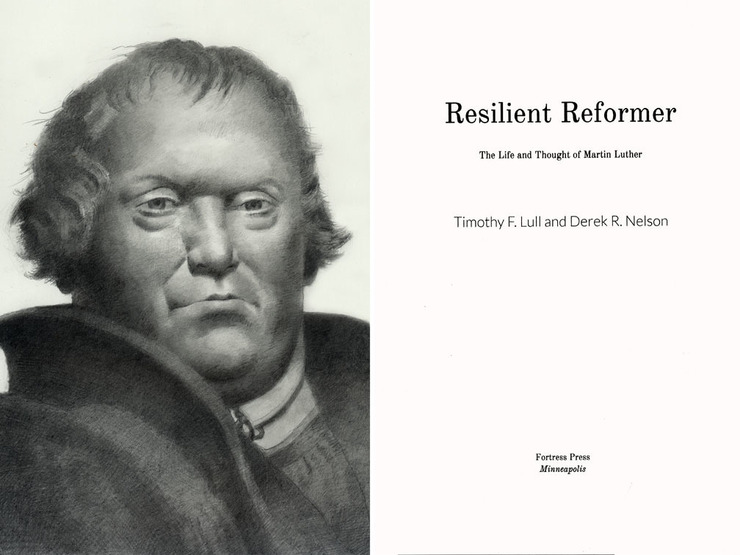 Published by Fortress, a religious publisher, the book has gotten excellent reviews. It's been called a "fresh look" and a "refreshing spin" on the man behind the Reformation. One critic judged it "by far the best Luther book out of the 10 or so I've read," and ended by saying that until a better one comes along, "this is the biography to read."

Derek says in his Preface that in completing Tim's book he tried to "approach" his former professor's "inimitable style" and "lively prose." In doing so, he says, he found his "own voice."

It made me think of the day I met Tim.

In 4th grade, I was new to a new school. And coming back early from lunch that first week, I found this short kid in a striped t-shirt sitting alone in the classroom reading the Little Golden Book of Stars. 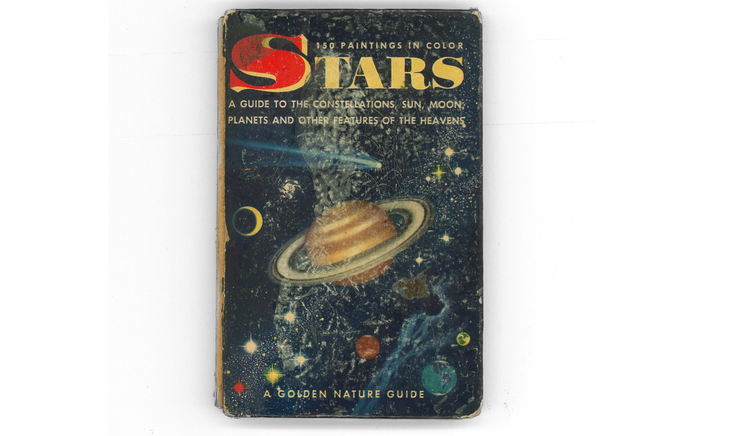 I don’t remember who started the conversation, probably Tim, but we hit it off immediately and carried on until the bell rang and the room filled up with kids.

I was shocked to learn that Tim's little shiny book was not a library book. It was his. He owned it! And what's more, he said, his family had lots of books. I didn't know how that was possible; there were no bookstores in Fremont. But I envied Tim having books of his own, envied the fact that he could look stuff up in a book even after he had read it without having to run back to the library and check it out all over again.

At that age I wasn't thinking seriously about a career. I knew that I loved drawing and writing but I had a great interest in history and anthropology and sometimes I imagined that I'd grow up to be like Admiral Byrd or Roy Chapman Andrews, whose book about his expedition to the Gobi Desert I had just read. Now, looking briefly through Tim's book I developed a sudden interest in the stars as well.

Before the class filled up I realized that I wanted the information in Tim's book, so he loaned it to me. I had it for about a month.

At first, I just read and re-read it. But then, realizing that I'd have to soon give it back, I began laboriously copying out page after page of star charts on notebook paper. 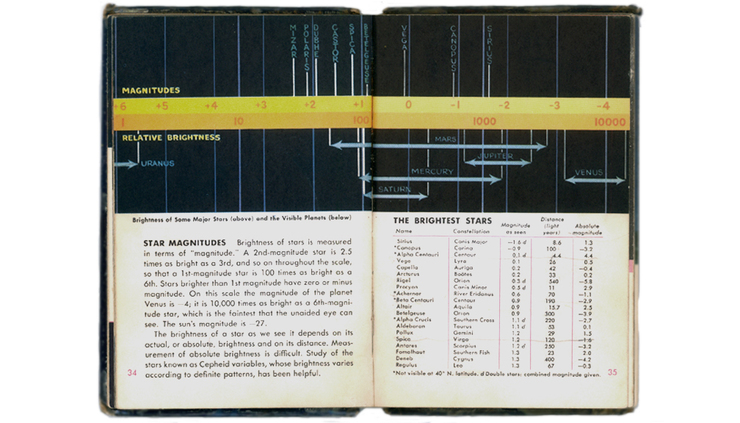 Then nights I put the charts to good use, shinnying up the television antennae to the roof and sitting there in the dark with my charts and a flashlight and my toy binoculars trying to locate and memorize the names and magnitudes of the 20 first magnitude stars.

Later, after I had copied out all the statistics in the book, I got some black construction paper and Prang Poster Paint and began copying the illustrations of the constellations as well. 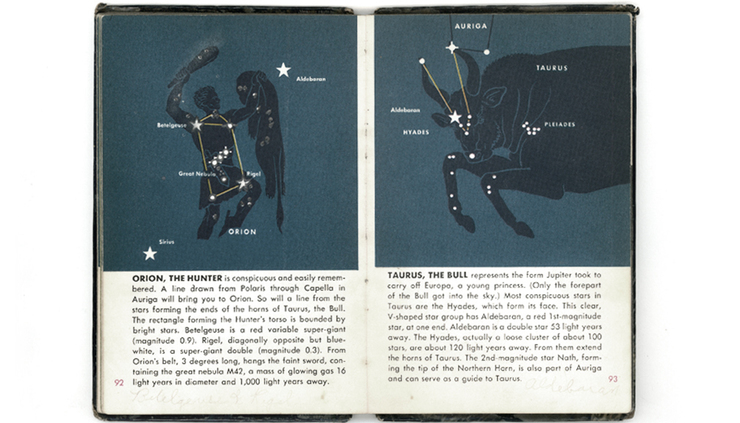 In doing so, I discovered that I got more satisfaction from painting the mythological figures than from rendering the positions of the stars.

Two years ago, after Tim and Derek's book had finally gone to press, I had a short talk with Mary Carlton, to thank her for giving me the opportunity to do the cover. During our conversation I told her the story of the Little Golden Book.

"I think we've still got that book somewhere," she said, and a week or two later, it arrived, completely unexpected, in the mail, a little the worse for wear, but like a first love, just as magical to me now as the day I first saw it in the hands of my new friend all those years ago. 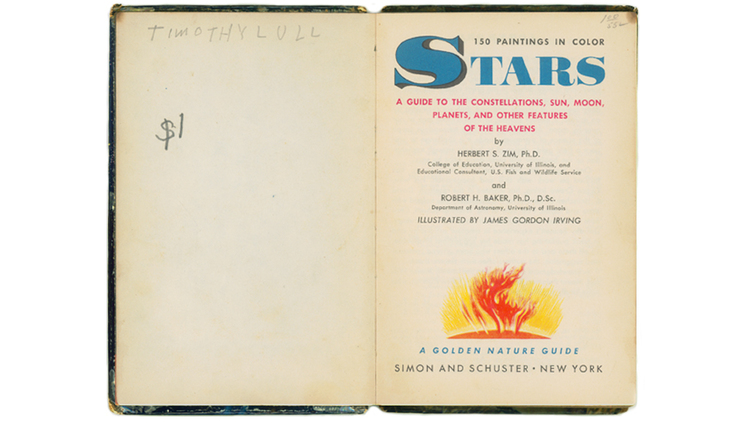