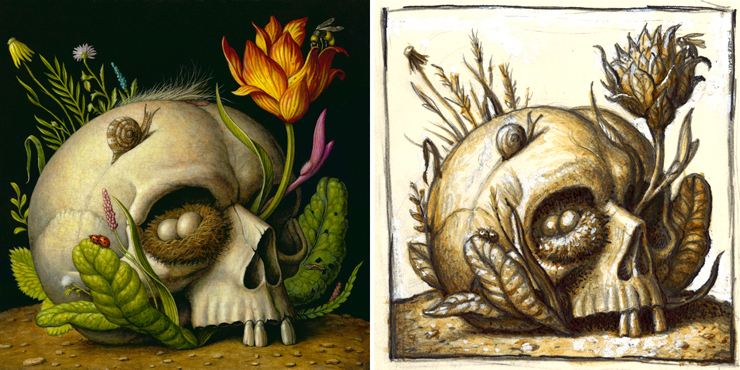 The final art, and the initial sketch (done in pencil, ink, watercolor and gouache)
A few years back, the great Tim O'Brien won the Hamilton King Award--considered the industry's most prestigious, and one that honors both an individual piece and a life's work. He wrote eloquently about the surprise he felt in having his name announced at the Editorial & Book opening--the first time the Society of Illustrators had made that announcement at the exhibit (in the past, it was always announced at the President's Dinner in June). It was fun to read his thoughts on how he approaches expectations in his career, preparing himself for disappointment so that happy surprises remain just that: Happy. Those thoughts rang true to me when I read them, as I tend to do the same in my own life. "It'll never happen, so just keep pushing forward." I must have some Irish in me.

I hadn't planned on making this year's Editorial & Book opening myself, as I was honored to receive a medal this year in the Uncommissioned category and as a result used up my allotted NYC travel budget in January. We're also in the midst of having some minor construction done in the room above my studio, so I felt like I needed to stick close to home and keep an eye on things. In fact, I was painting with the headphones on to drown out the noise of hammers last week when Anelle Miller and Kate Feirtag at the Society of Illustrators called, but they left a message. In character, I assumed my work for the Editorial Show hadn't arrived or was damaged by shippers in transit, so I quickly gave them a ring. When I got them on the phone, they gave me the surprise of a career: I'd been awarded the 2011 Hamilton King Award. It was a call I never thought I'd receive, but one I couldn't be prouder to have gotten. 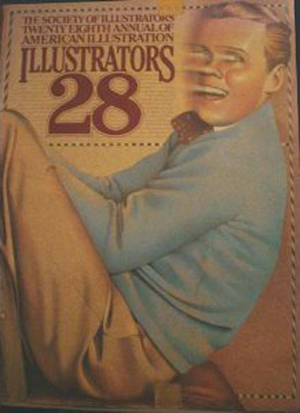 My introduction to illustration was indirect: I'd gotten a BA in Art History and a BFA in Printmaking, with no really clear idea of how any of this might translate into a life of drawing and painting--I just followed my heart (and my nose). Like most students, I experimented with everything, and illustration was just one of the many ways I considered moving forward in my artistic life. It was in that crucial period that I discovered the Society of Illustrators Annual books, the oldest and most acclaimed of the annual competitions and one that was filled with a range of work that gave me a clearer picture of what illustration was and could be. What all that work had in common was its commitment to excellence. It was a revelation to me, because it showed me that illustration wasn't some ephemeral artform, but something that demanded my craft, my intellect, my passion, and my voice. The SI Annual raised the bar for what a career as an illustrator might offer, and what I'd need to bring to it.

So receiving the news last week about this award was at once a proud and a humbling moment. The selection is made by former recipients of the Hamilton King, and that list of names is a Who's Who of artists I've been in awe of since I first opened the pages of the Annual. That they'd consider adding my name to that list is truly the highest honor I can imagine, and celebrating it with friends and colleagues seemed like the only fitting way to receive it. I hopped on a plane Thursday and flew up for the ceremonies Friday. I'm still floating on air.

The piece that received this award, "Himmelblick", was one of two in the Uncommissioned category, and the one for which I also received this year's Gold Medal. I did the initial sketches for "Himmelblick" on a train trip to Paris this summer, and snapped a photo of it in progress on the shaky table in front of me (with beer in bkg for inspiration).

I also have three pieces in the Editorial & Book show which I've posted below. Many thanks to all the art directors and clients who've commissioned me to work on projects for them this year, and to the jurors who saw fit to include these in this year's exhibits. 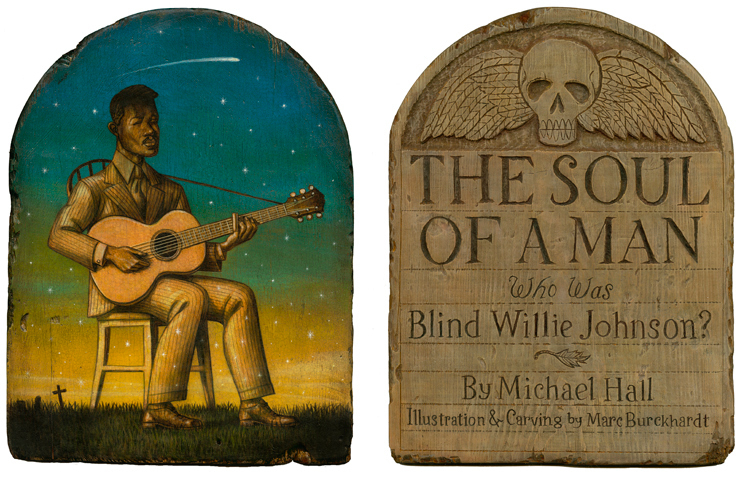 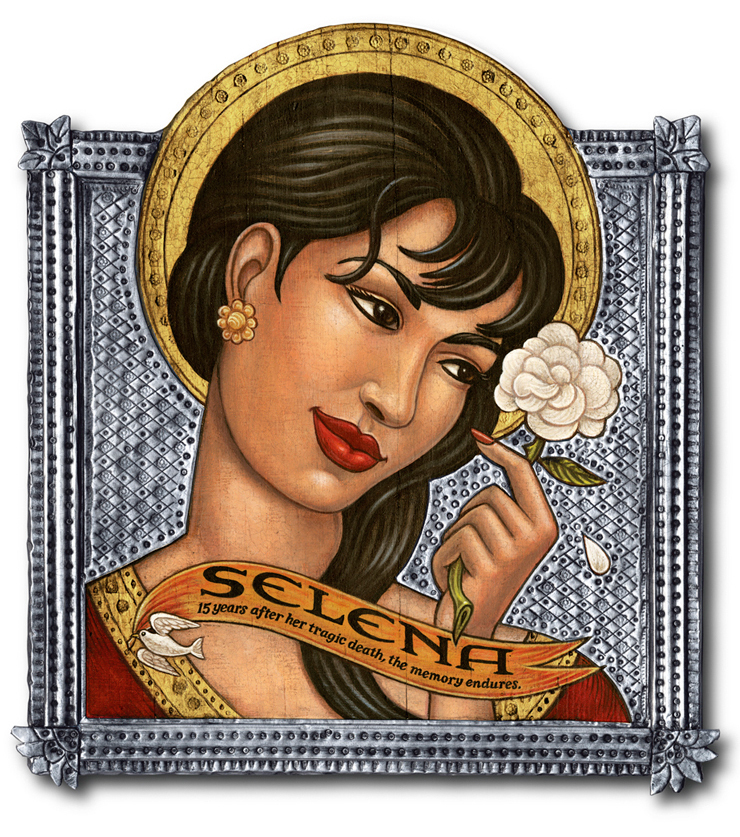 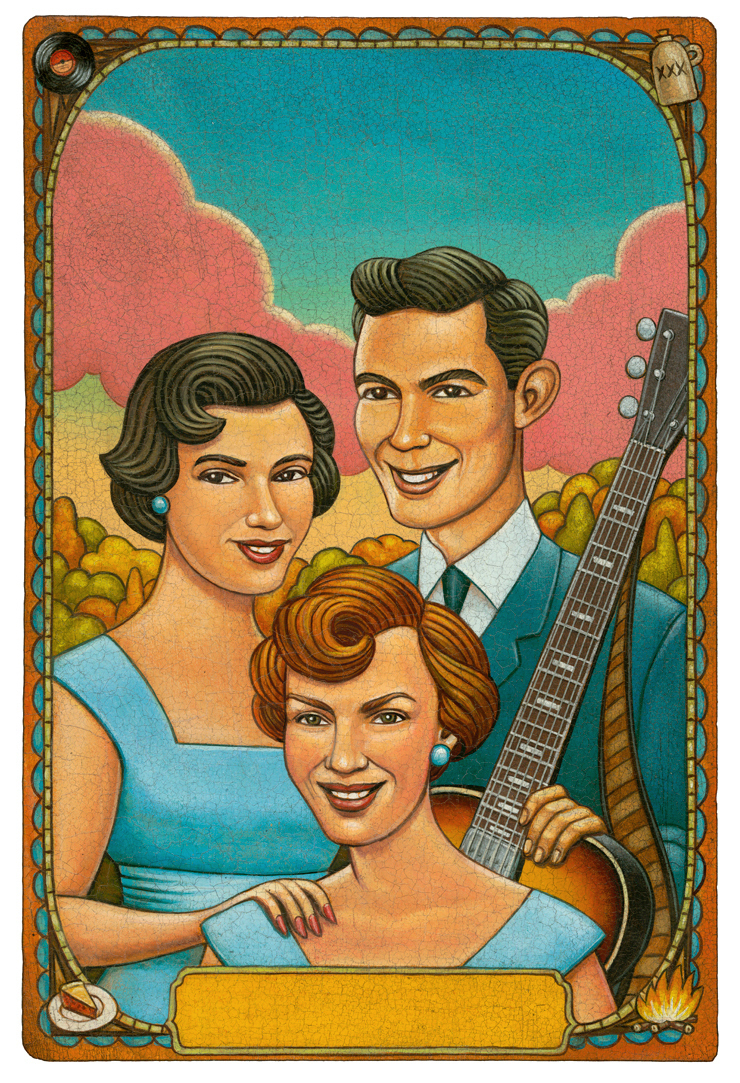