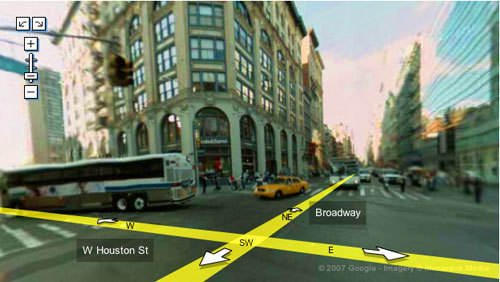 When I first moved to New York, some guy tried to tell me Houston Street was pronounced, "How-ston". He musta thought I was a real rube, to fall for that one!
A little thing I put together in Flash, from a bunch of stills I screengrabbed using Google Maps' Street View feature. Orwellian Invasion of Privacy charges aside, I find the technology fascinating, and spent some time this weekend virtually revisiting some my old NYC haunts, in addition to checking out some spots I never managed to make it to, in the fourteen years I lived there.

I shoulda/coulda made some use of of the zoom/pan controls on offer to add some variety, but I'll save that stuff, along with some hilarious outtakes, deleted scenes and bloopers, for the sequel- Google Maps Street View II: Goin' All The Way!
Latest
Google Maps Street View: The Movie The Marones! Gymnopedies Misfortune Cookies My Life In The Bush Of Ghosts Turns 25 Delusions Of Grandeur From the Pages Of The Pasadena Bee Bigmouth Strikes Again On Rejected Sketches Tremble In Fear Before My Mighty Blogging Skills
Topics
Topics
Life In These United Snakes
Image Galleries
Holga Fotos Misfortune Cookies Postcards Rejected Sketches Delusions Of Grandeur Dexterity Puzzles