My Life In The Bush Of Ghosts Turns 25 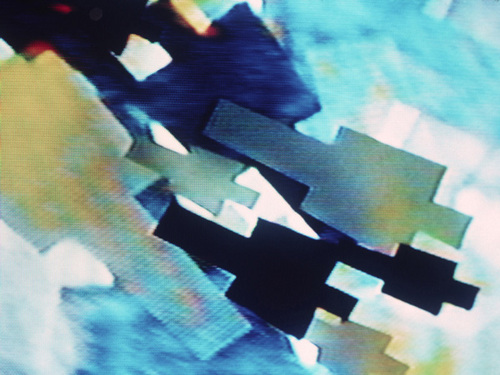 Photo by Brian Eno and David Byrne
Not much to say about this record, except that it was
a.) a groundbreaking collaboration between David Byrne and Brian Eno, and
b.) WAY ahead of it's time, and as far as electronic music goes, it pretty much influenced everything that followed it, either directly or indirectly.

Recorded without samplers, using found vocals from a variety of sources, it was released to little acclaim a year after Talking Heads' Fear of Music, and a year before Remain In Light, another watershed Byrne/Eno collaboration. Sometimes I forget just how goddam good Byrne's stuff was, before he lost me a few years later with his less-compelling forays into Brazilian and world music.

Here's the video for Mea Culpa, my favorite cut on the album. When you think about the big hits of 1981- REO Speedwagon's Keep On Loving You, Lionel Ritchie's Endless Love, Kenny Rogers' Lady, Journey's Don't Stop Believin'-  it doesn't look or sound like it was produced on the same planet, much less the same year.

The Bush Of Ghosts site, where a feller can listen to, and remix some of the songs on this legendary album.
Latest
Google Maps Street View: The Movie The Marones! Gymnopedies Misfortune Cookies My Life In The Bush Of Ghosts Turns 25 Delusions Of Grandeur From the Pages Of The Pasadena Bee Bigmouth Strikes Again On Rejected Sketches Tremble In Fear Before My Mighty Blogging Skills
Topics
Topics
Life In These United Snakes
Image Galleries
Holga Fotos Misfortune Cookies Postcards Rejected Sketches Delusions Of Grandeur Dexterity Puzzles