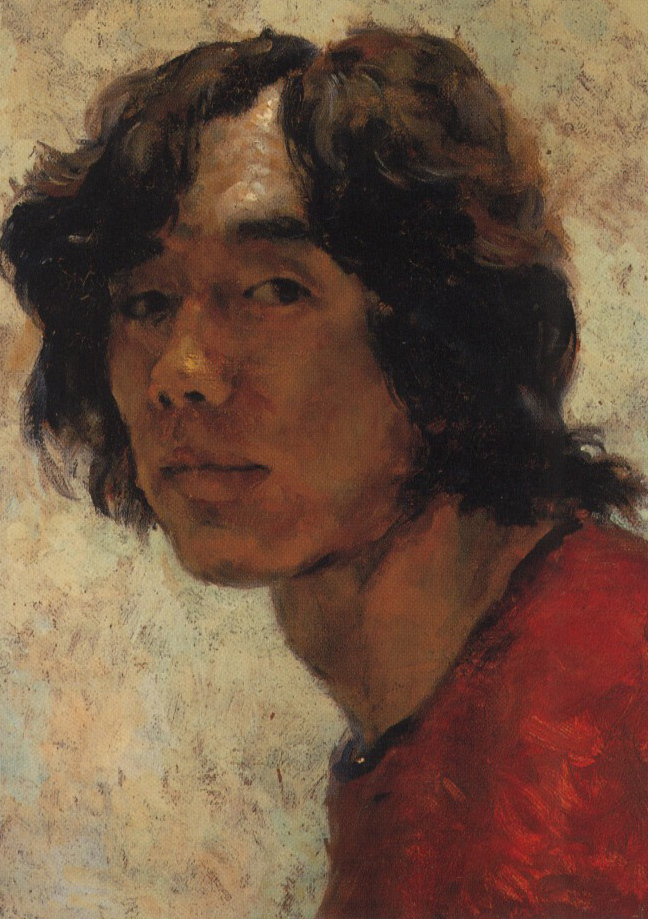 Kazu Sano, 1974 self portrait painting for the Tokyo University of the Arts entrance exam
I met Kazuhiko Sano in 1978. I had come to San Francisco to get an MFA degree from the Academy of Art. I was told that the gradute program was very selective, so much so that at the time there was only one other master's student enrolled. I often heard about this elusive student, who never seemed to be at school but whose skills were said to be far above those of everyone else.  I finally met him two months into the semester, at the San Francisco Society of Illustrators show. The show featured work by great local artists like David Grove, John Mattos and Bruce Wolfe…but all anyone seemed to be talking about at that first show  was this guy who was still a student. He had presented a suite of paintings of his girlfriend Chisako, who was still in Japan, using the four seasons as a theme.He stole the show. 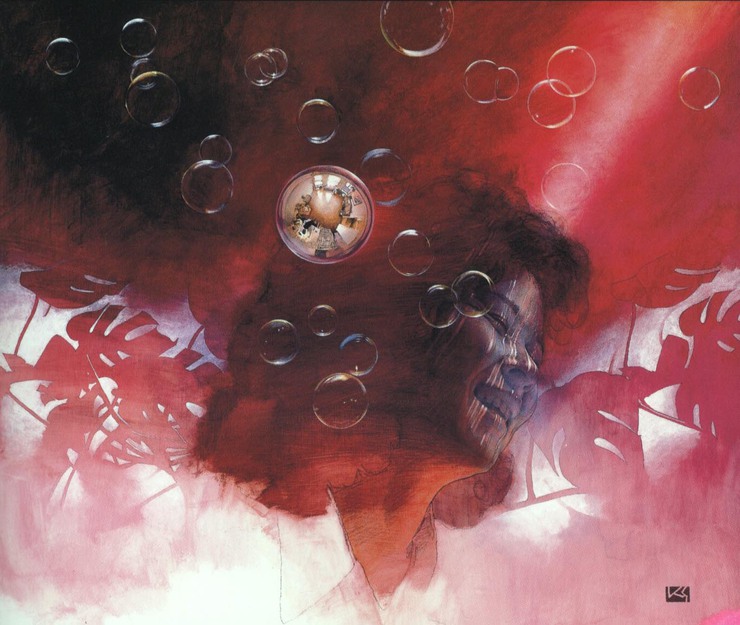 Kazu Sano: Fall, 1980
We hit it off immediately. We had to, in a way, because as time went on we were continuously pitted against each other in our own category in every competitive event at the academy. We learned that we had a lot in common…we were the same age. Kazu had an encyclopedic knowledge of art history and we introduced each other to artists we admired, new and old. We both loved the Beatles – Kazu had actually seen them in Japan. Both of us saw illustration as an alternative to the frustration we both experienced with our earlier art education. Kazu had applied unsuccessfully to Tokyo University of the Arts three times before making the decision to come to America in 1974. He enrolled at the academy and had already received a bachelor’s degree there when I met him.  Kazu worked harder than anyone I ever met, and I had to try to work harder to catch up with him. We developed a competitive balance in our friendship that was very special and unique. It worked for both of us.
We received our MFAs and had our first show together upon graduation in 1980, the first of six two –man shows we would have together. 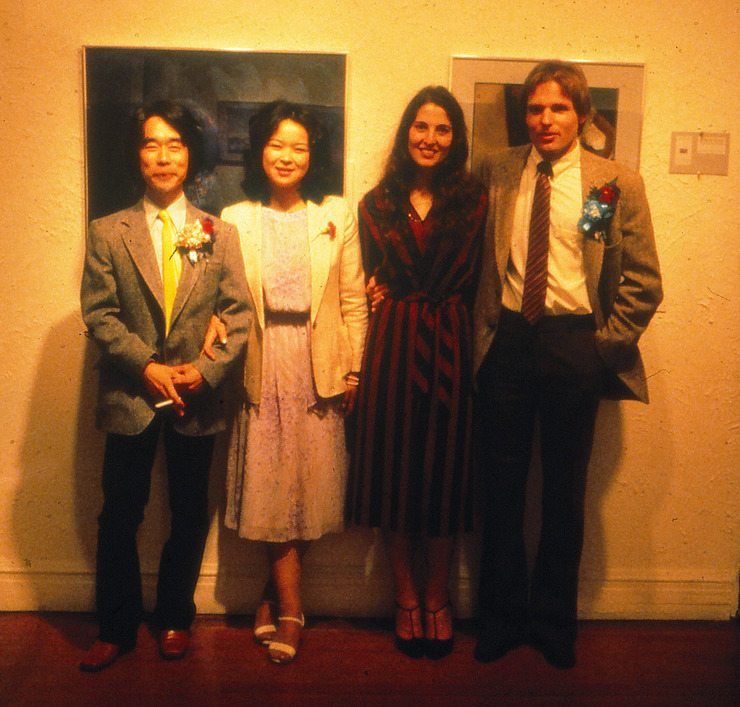 Kazu, Chisako, Lynn and I, at our second 2-man show, 1983
I had to do my absolute best work to keep from being completely upstaged by Kazu. Competing with each other propelled us beyond school into the professional world, and we both began to get work. In 1982 Chisako and Kazu married, and they went to New York on their honeymoon. Kazu came back with a book cover assignment. The next year we both got into the society annual and both went to New York together, armed with a list of contacts provided by David Grove. We went to New York every consecutive year for the next 16 years. 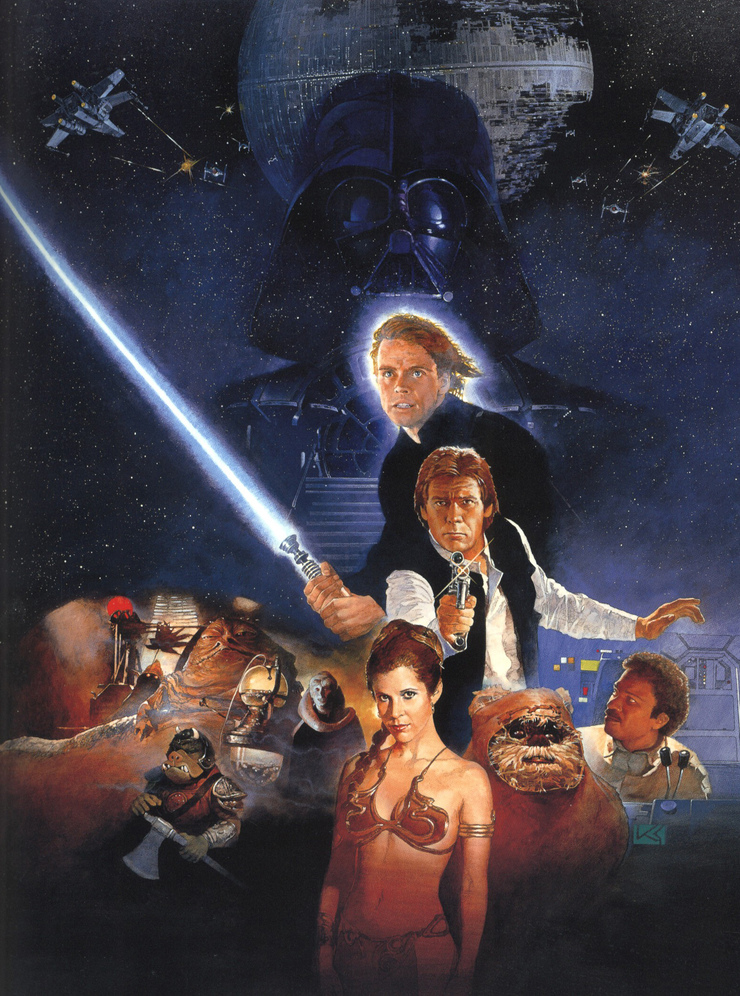 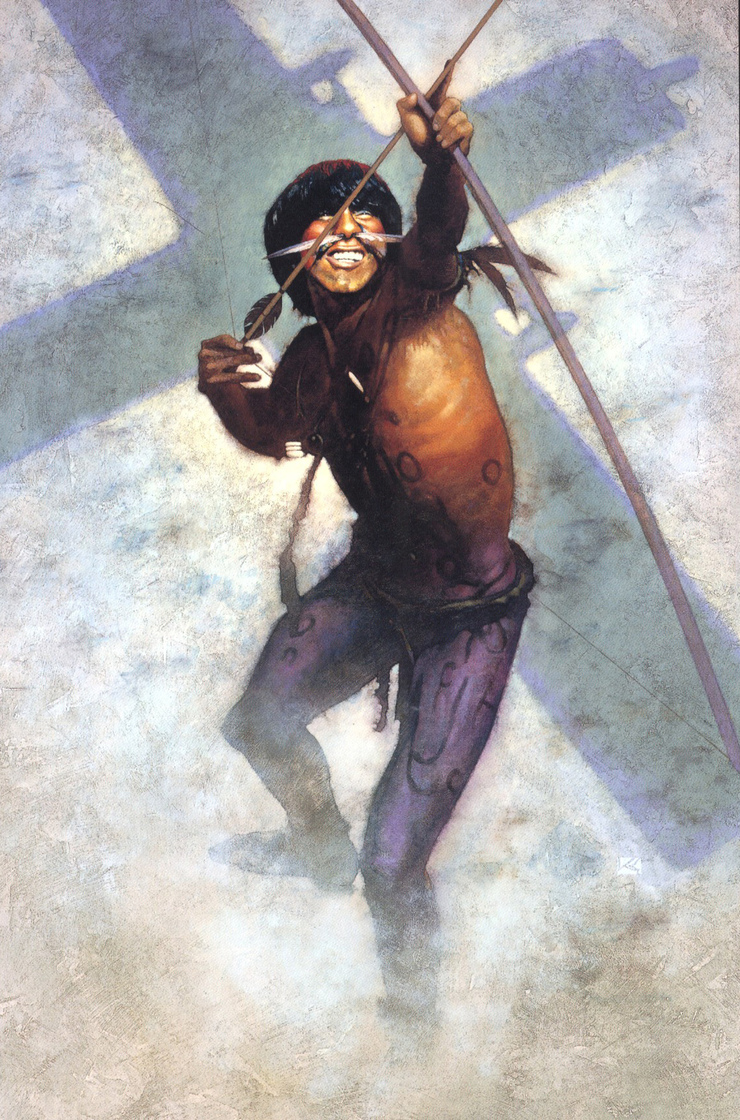 Kazu Sano, At Play in the Fields of the Lord, 1991
We had our second two-man show in 1983, and another in 1986. Despite commercial success, (Kazu having notable success in the movie poster world having done Return of the Jedi among others) we made a decision not to show published commercial work in our shows together. This combined with our competitive natures motivated us to do large amounts of personal work. It was a good plan.

We were now married and each had children almost the same ages. For years Kazu’s children, Yutaro and Yukie, called me “Uncle Bob”. We continued to go to New York together to forge and maintain personal relationships with art directors and clients. We introduced each other to art directors we worked with and went together to show our new work to them. We joked that it this method would work until the business slowed down for one of us.
In 1996 we had our biggest 2-man show, at the Society of Illustrators. Because we had the entire gallery to use, we each showed 50 pieces. We decided that half of the work should be new personal work and half published. To me, some of the most experimental and interesting work Kazu ever did was in that show. 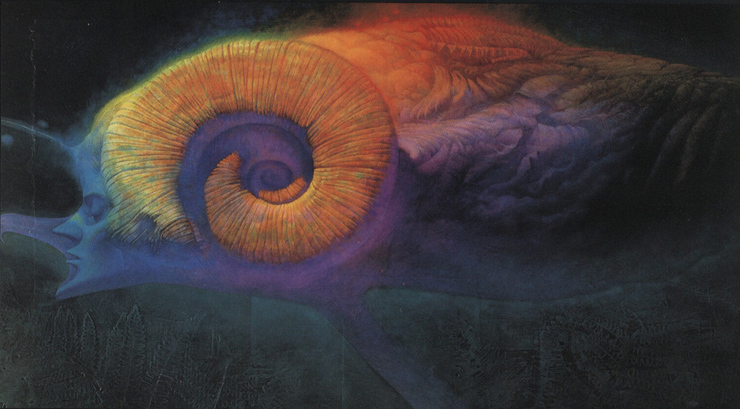 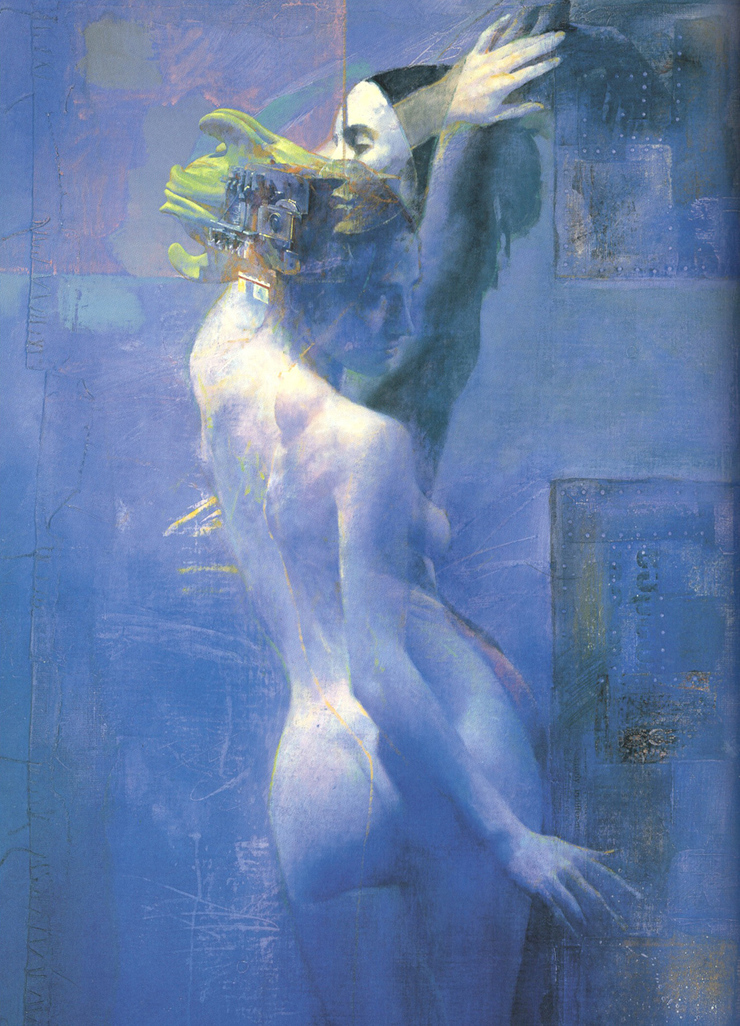 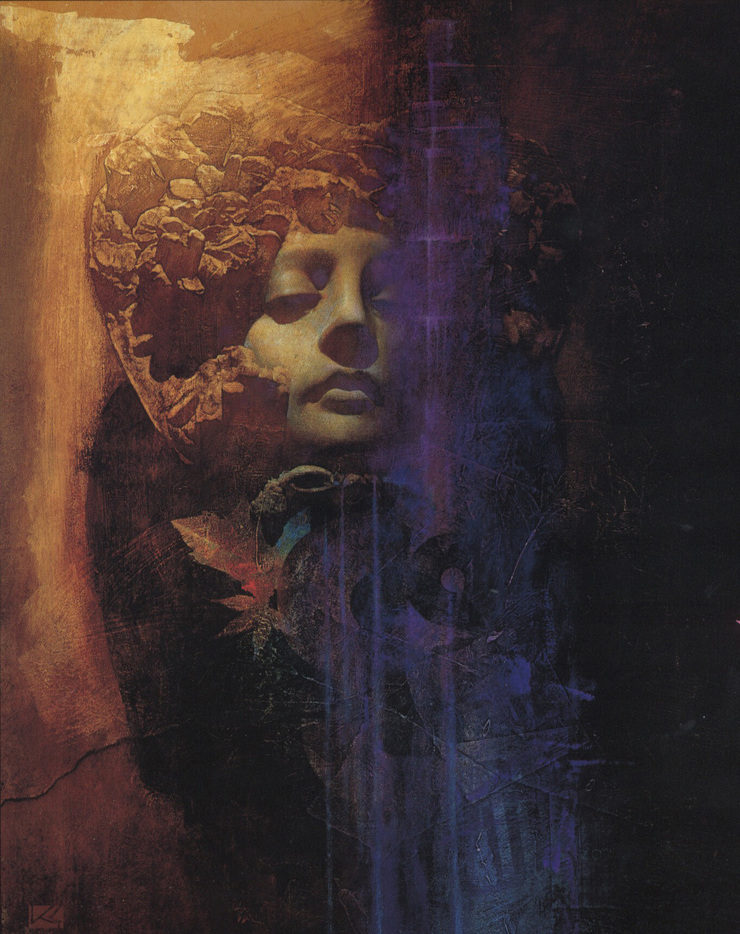 Kazu Sano, The Relic, 1996
After the 1996 show, as the illustration business evolved, we began to go in different directions professionally, Kazu focused more on the Japanese fine art market and his first love, scientific and natural history illustration. I too felt the need for a change. I began to realize that our professional identities had become intertwined in a way that limited us both. I needed to push myself in different directions and in different ways. The next time I went to New York, I went on my own. 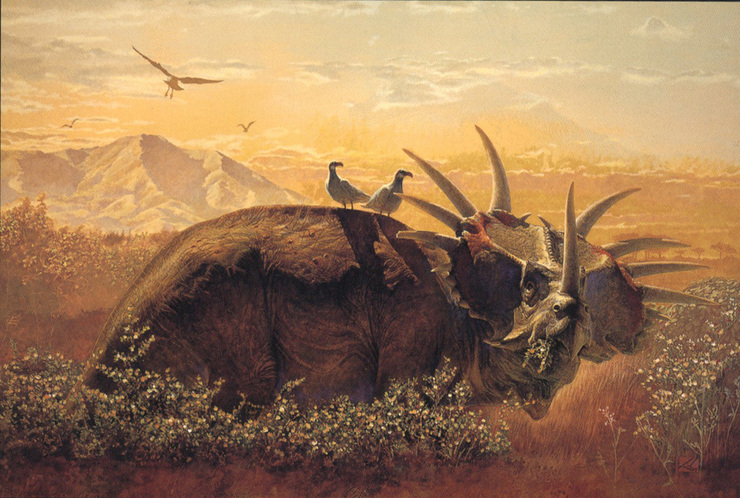 Kazu Sano: Styracosaurus, 1998
In recent years, Kazu continued to create beautiful paintings - of Europe for his Japanese clients, incredible prehistoric images for National Geographic and other publications, and numerous postage stamps.
He continued to work and teach at the Academy of Art until three weeks ago when the cancer he fought for the past two years took a turn for the worse. I went back to the academy and substituted for him on what would have been his final day of teaching - and I saw the deep love and respect his students felt for him. 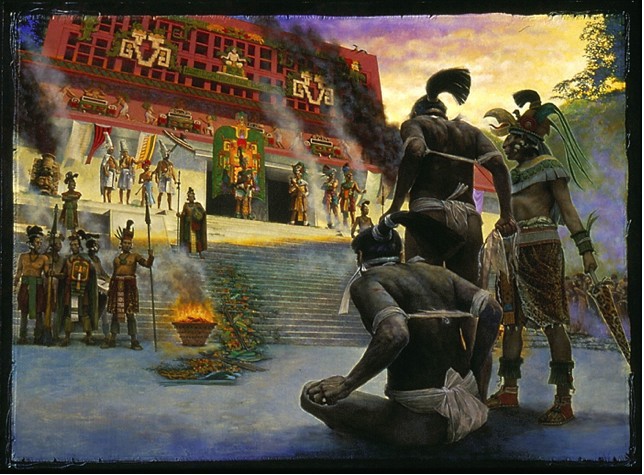 Kazu Sano, Mayan Temple 2006
Over the last 30 years I learned many things through Kazu’s example. He was patient, humble, kind, generous and funny. He approached his work with total dedication, and advanced forward a step with every painting. He cared about the pictures he made, not just the reproduction in print, but also the actual painting, the surface, the color, the nuanced qualities of subtlety and detail, qualities that became more rare in an evolving digital world.  He studied every possible thing he could about all his subjects, and he poured his knowledge, skill and love into every brushstroke. To me, his use of acrylics was analogous to Jimi Hendrix's use of a fender stratocaster- a common tool that opened new possibilities when in his hands. He stayed on the same path, and made everything he did as good as it possibly could be.
During his last days we talked and laughed about the fun we had in New York, in school, at our shows, our kid’s parties. I told him about my current students, about how I took them to New York on a trip modeled much after our earlier trips to New York, to show them the ropes. 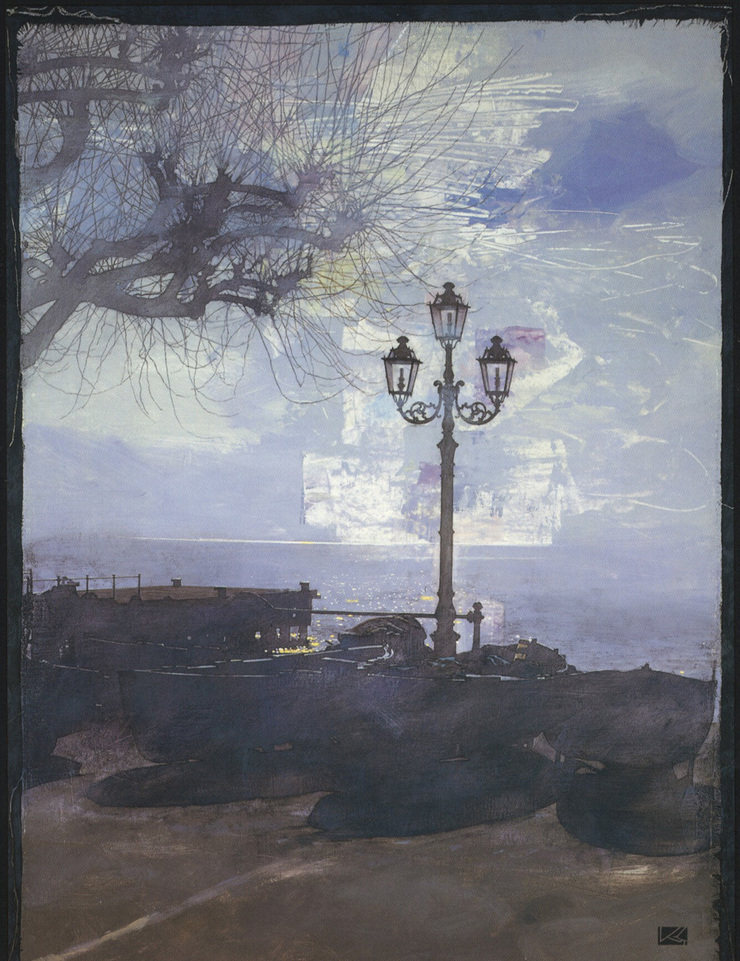 Kazu Sano: Withheld Passion, 2000
Last Tuesday,  I sent Kazu’s students an email message:
"Hello students of Kazu
I have to pass on the sad news to you that your beloved teacher Kazu passed away this morning. He was at home, at peace and did not experience any pain.
As you go forwards in your art career, remember that the most valuable thing you have is time. Please use it well."