APRIL 17, 2009
Here’s a Print interview from last month with  Steve Heller, complete with illustrations for each question, which for some reason I wanted to do.  Anyway, here it all is, put together.  Also a taped piece is running currently at  MOTHER JONES.  For guy who’s motto is: “Shut up and draw”, I have been a serious scofflaw.  Back to work now, I promise.
DIALOGUE 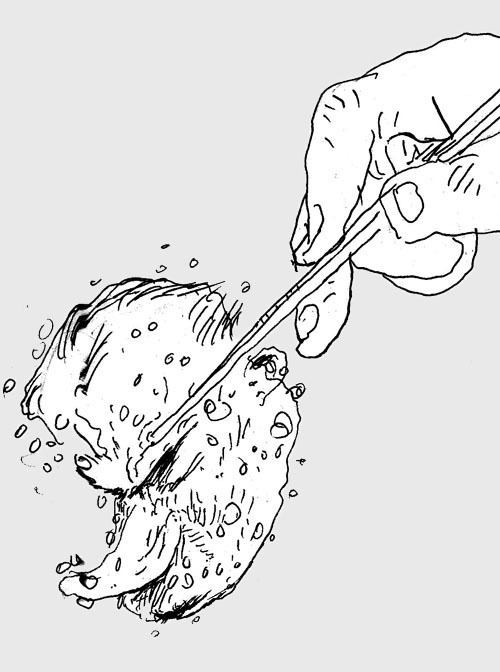 SH: What is a caricature?
SB: A cute way of thinking
about caricature is like an inside-out sushi. The
sushi maker can skillfully arrange for the sticky
rice to be on the outside of the skin rather than
on the inside, where it usually is. A caricature
of anyone or anything can be rendered in a way
in which what is on the inside of a subject can
be brought to the surface. The story is most im-
portant to me here. There has to be a point;
otherwise, it’s a parlor game. Caricature is not
the train you get on, but the town you’re going
to. 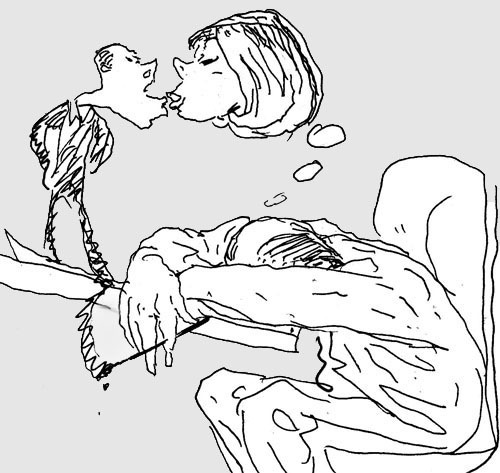 SH: What is a Brodner caricature?
SB: It’s an attempt at visual narrative. My goal is always to
have the visual and literal messages blend so
well that you don’t see a difference. Like the
music and lyrics of a popular song, or in an
opera. When you are lost in the enjoyment of
the whole effect, the affair is seamless and
seems effortless; the mechanics disappear and
this then becomes a (good, we hope) experi-
ence for the viewer. 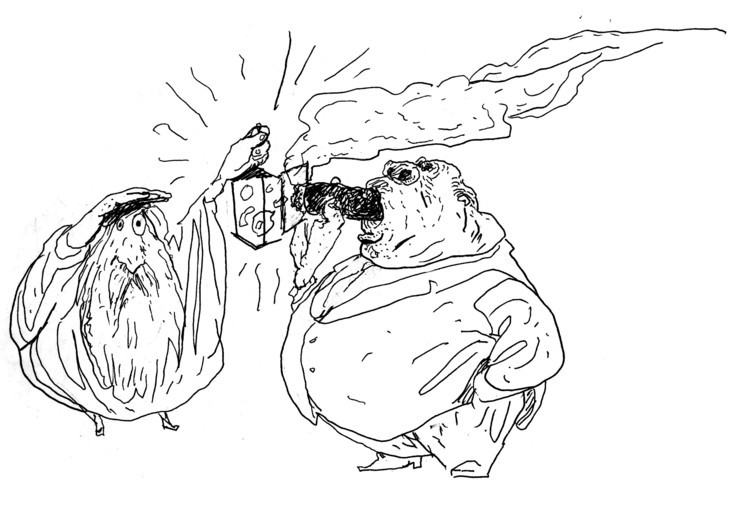 SH: Many of your caricatures
are politically motivated. Do you believe that
your art will have some impact on politics?
SB: Nope. I learned a long time ago that the point
of it has got to be the love of communication in
pictures with strangers about important things
in a way that has a chance to be meaningful
and compelling. How people react is up to them.
Some engage, some don’t. My job is to light the
lamp as best I can. 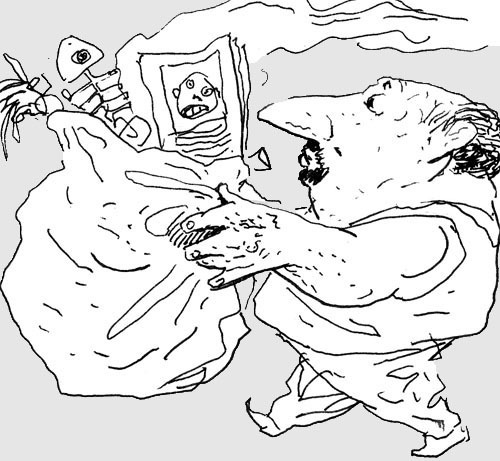 SH:  How do you expect your
viewer or reader to respond to your art?
SB: know that people will encounter the art in
different circumstances,
coming from different places.
I want them to see it as honest: an at-
tempt by someone who has not gotten the
message that he ought to hide his feelings,
and who wants to contribute a concise and pas-
sionate assessment of issues before the public,
using visual language as effectively as possible.
I was so gratified at the Norman Rockwell
Museum recently to meet conservatives who
were happy to talk politics because they saw
in the work an element of reason and sincerity,
even if, to them, it was wrongheaded. 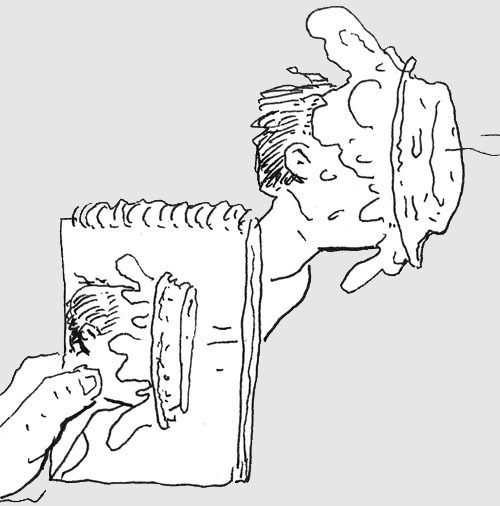 SH:  In this age when dirty tricks and negative campaign-
ing is so prevalent, how does a caricature make
any difference to the way people think?
SB:   I think
caricature makes a difference when it has the
“of course” moment. This is when a very well-
realized idea is in the groove of the moment to
so great an extent that it crystallizes what peo-
ple are thinking, and because of that it cuts
right to the heart of a subject and does it with
a kind of grace. You see this in Hanoch Piven’s
portrait of Jesse Jackson with a speaker for a
mouth, Barry Blitt’s Obama/Osama cover for
The New Yorker, Victor Juhasz’s illustration of
George Bush getting an affectionate head-
knuckle from Jesus. When you see this happen,
you see something that is so dead on, you hit
your head and say, “Of course”—although in
Barry’s cover, it was a very taboo topic and made
people crazy. Also, there are a lot of people who
had never encountered satire in print before.

SH: You’ve been on a mission—one of those prover-
bial missions from God—to revive respect in
political art. Do you think you’ve succeeded?
SB: I do regular visits from God
because I have cable and Blue Moon beer in the
fridge. I complain about my lower back, global
warming, whether people will want political
art. She says, “Look, nobody cares about this
stuff. You draw pictures because you love it. So,
yeah, you’ll be rewarded for it. You’ll have the
pleasure in your work. And you’ll die happy and
go to the astral plane feeling like you didn’t
bullshit anyone and actually got to say true
things in print and online. Shut up and draw.” 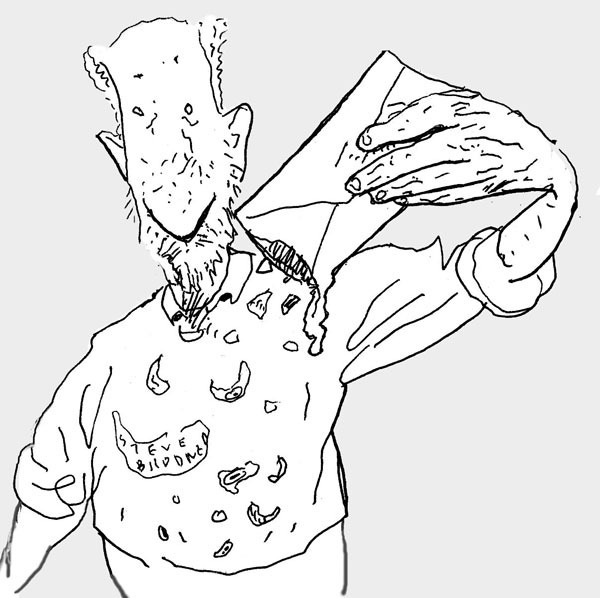 SH: You’ve done some powerful images—one for
me when I was at The New York Times Book Review
of Joe Stalin with hands covered in blood—
and provoked a few angry letters (ironic, no?).
Have you been attacked at all for your work
during this past campaign?
SB: I don’t consider
disagreement or displeasure with a piece to
be an attack against me. There have been some
upset e-mails about pieces I’ve done—once,
somebody sent me a thing I did torn into tiny
pieces. You have to know it’s not about you. It’s
about the stories people have had already in
their brains. You sometimes become the moist
host for their insect eggs. 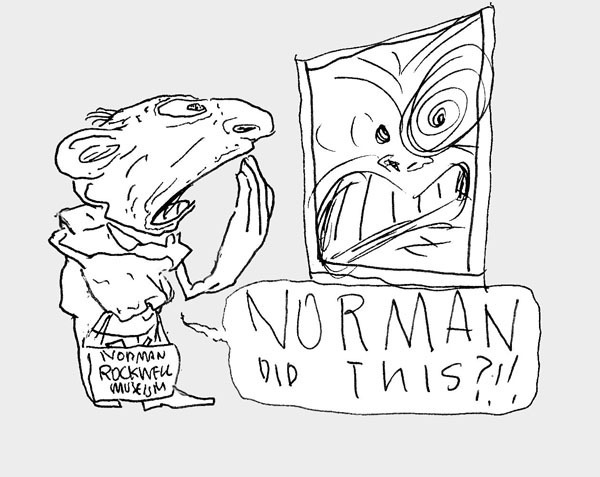 SH:  You were given
a retrospective at the Norman Rockwell
Museum—a rare thing for a political artist.
How do you think this has changed the way
people perceive political art, if at all?
SB: When you
go up there and see people respond to your
work as a whole, it’s different than the reactions
you get to individual pieces. When they see
your trajectory of thought and sensibility, they
get a personal sense of you and are very warm to
what you are up to. Maybe that carries over into
the way they see our whole genre. That would
be nice. 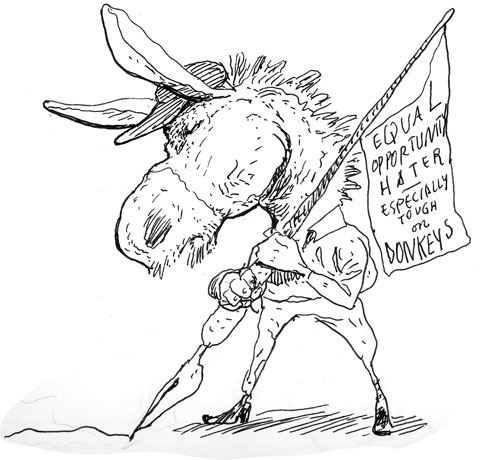 SH:  Do you consider yourself partisan?
SB:  I’m clearly a person who thinks that people’s
problems can be solved by people. It’s hard to
deny that a considerable part of human endeav-
or has been devoted to coping and conquering
ignorance, illness, oppression, poverty. And
there have been tremendous strides, basically
because of people attacked as “liberal.” I feel
the pursuit of figuring out problems is worth
our trouble in this life. That would have to put
me in the progressive end of things. I don’t
think that keeps me from full-spectrum satire.
All politics is about part recognition, part
denial of true things. If we all focus on connect-
ing the dots of the latter, and have at ’em, we
will all be kept very busy. 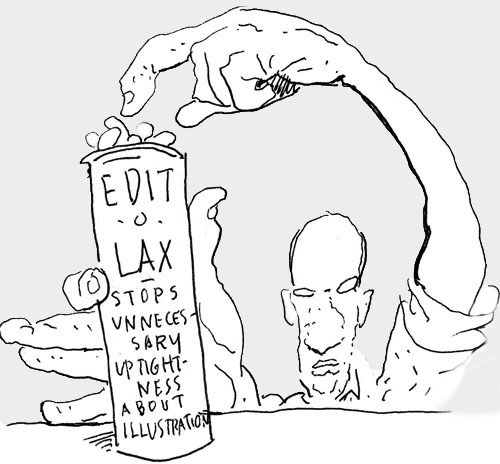 SH: You’ve offered
advice to editors and art directors on how to
strengthen the role of the visual satirist. What
would that be?
SB:  To understand that we as a
graphic arts community have some very keen
points of view and powerful delivery systems.
We are authors and can be looked upon that
way. Most of the awards I have won have been
for stand-alone pieces that I have pitched to
magazines. Brad Holland, Barry Blitt, Sue Coe,
Bruce McCall, Joe Sacco, and others have shown
how this works. Engaging with us as authors
will keep approaches to coverage exciting and
illuminating for readers. Also, illustration
assignments usually come in at the last minute,
after the piece has been assigned to a writer.
Why can’t we get the assignment at the same
time? This would enable greater collaboration.
Greater amounts of time spent on work and a
much better scene for everyone. 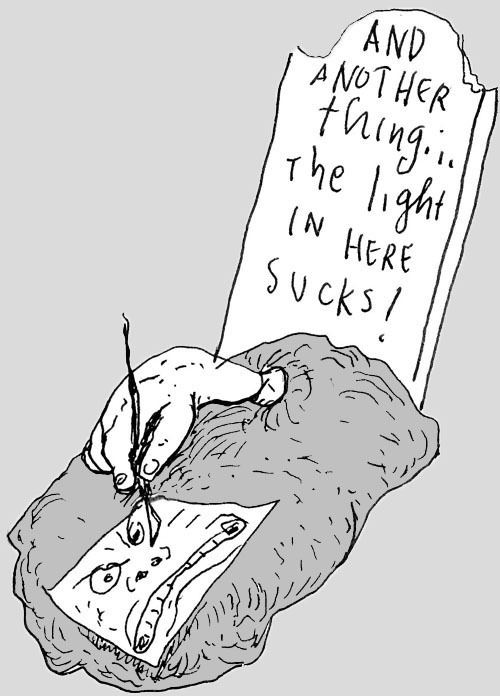 SH:  Do you
intend to do this—rage against the machine—
for the rest of your career?
SB: I’d be happy to go
to the end finding ways to tell the truth in
media as best I can. How can anyone not want
to do that?