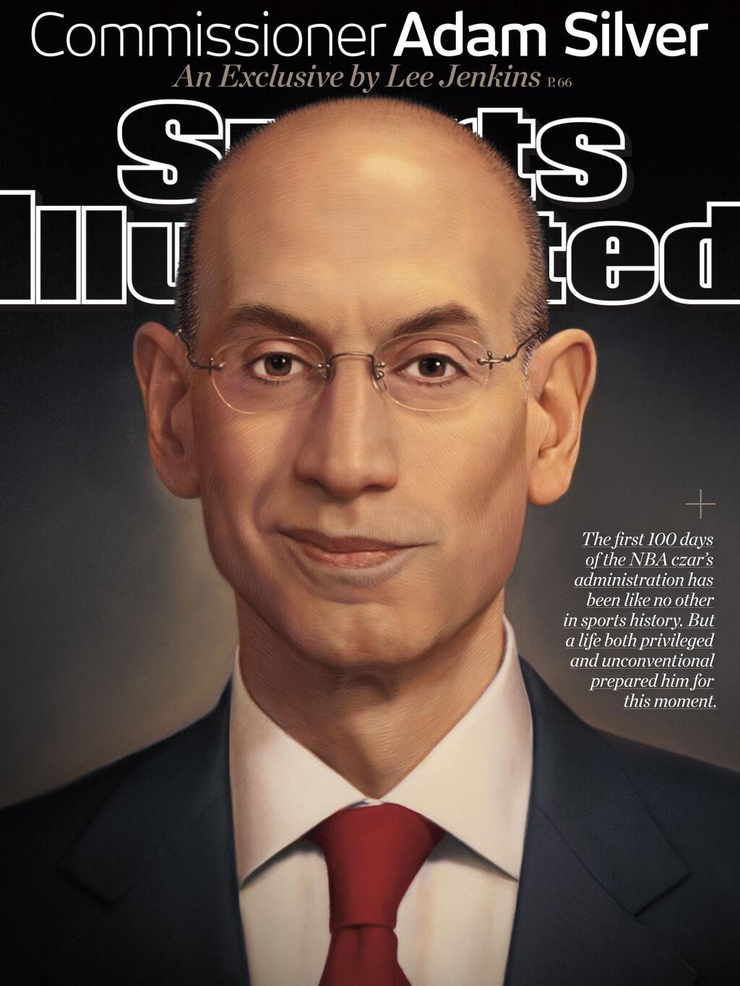 Last week I was called by Sports Illustrated to paint the new NBA commissioner and suddenly famous Adam Silver, the for their cover.
Adam Silver, as many now know, was thrown into the public consciousness by handing down an appropriately harsh sentence to the pathetically racist Donald Sterling, for remarks he made in a taped conversation leaked all over the internet last month.
History moves slowly forward and as a nation we do improve, kind of like an incoming tide.  Sure, it recedes here and there, but I like to think it does move forward.  Racism is our nation's dark history that has strong grip on some towns and minds.  Adam's action in such a public manner was to again signal that racism is not only inelegant, it is an evil that is unforgivable.
I saw my job as making Adam Silver look confident and majestic.  I had great reference and used subtle lighting and texture to make him look his best.
Being on the cover of Sports Illustrated is a thrill.  My first was last year and ironically enough it was another national sport commissioner, the NFL's Roger Goodell in a Game of Throne's motif.
As I said then, I think of how long I've read Sports Illustrated.  I received a subscription from my Uncle Eddie after my father passed when I was 9.  It would come every week and I would read about boxing, learn about Ali, Sugar Ray Leonard and Marvin Hagler, my brother Jay would read about hockey and paper his room with Boston Bruin photos, and my brother Dan would read about Baseball and Football.  The photos were always great and the art was as well.  To be a part of that history is wonderful.
Thanks to SI for thinking of me and to Uncle Eddie up there somewhere, for the same. 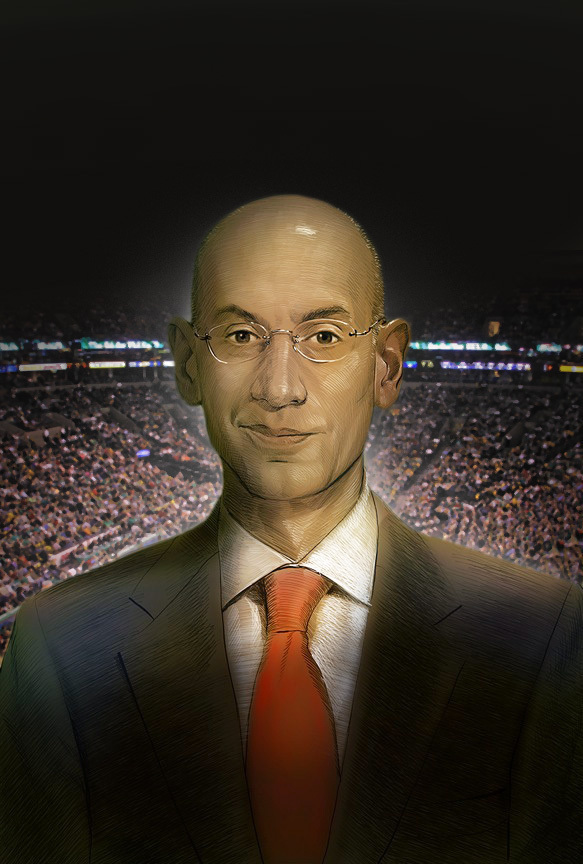 Here is a sketch that was requested using my drawing of Adam Silver. Though it put him in an arena, it was not as good as the somber cover they finally approved. It's good to see the options. 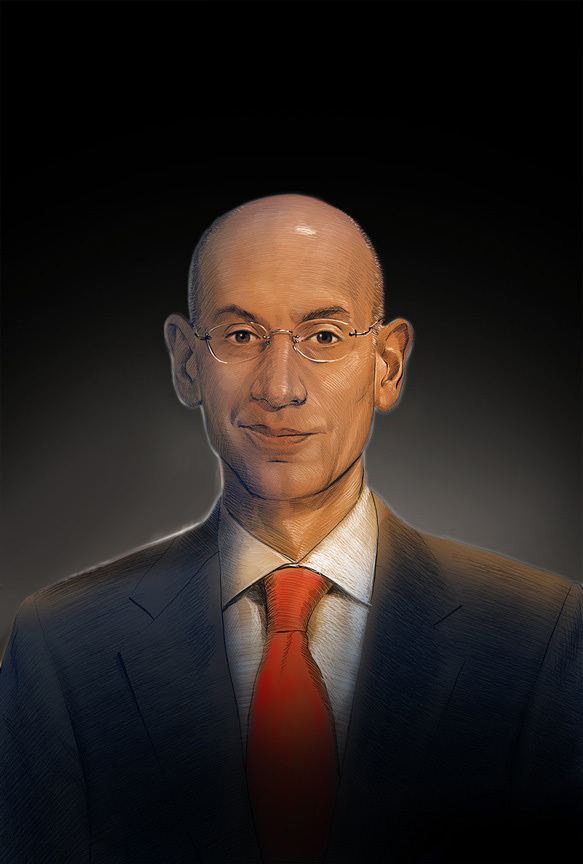 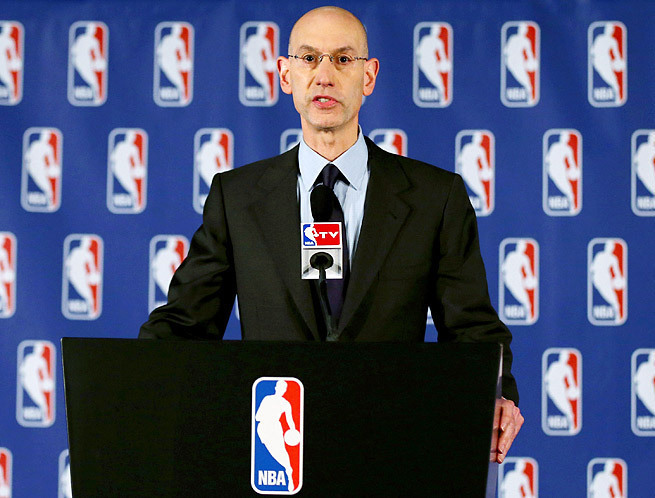 Here is Adam Silver handing down his Donald Sterling decision. I hope Sterling goes away without a fight. 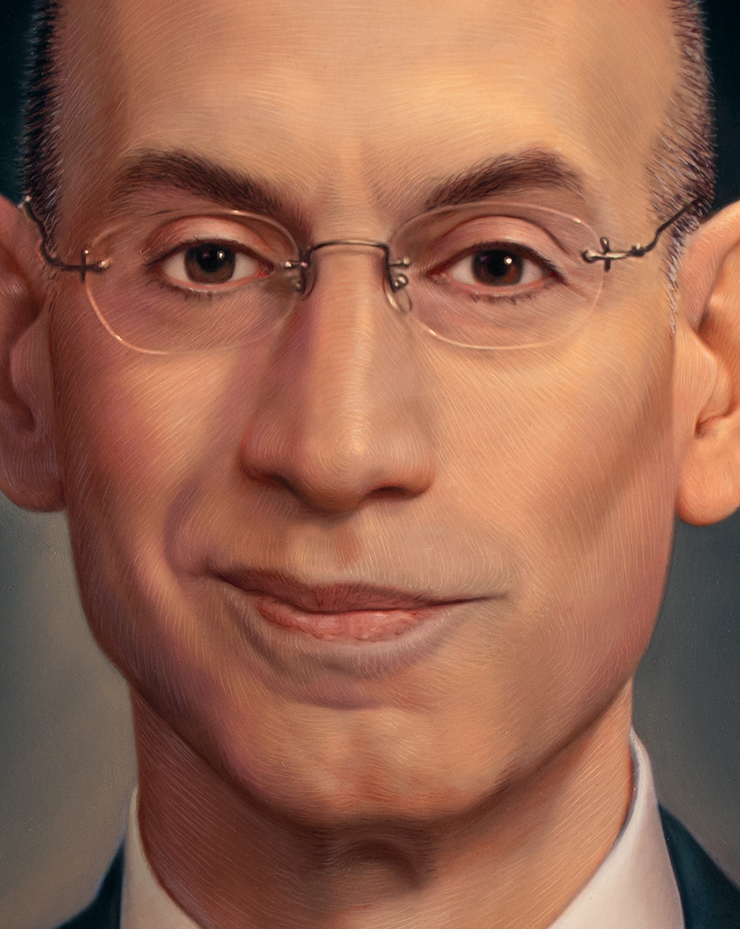 Up close are a million brushstrokes. Earlier in my career I would blend values together with a blending brush or fan brush. It works well, but makes all textures appear the same. From observations of the work of Paul Cadmus, George Tooker and Gottfried Helnwein, I saw that brushwork left untouched can both optically mix areas AND create a surface that can be understood like a topographic map. Some like it, others don't. I work almost to size so that the brushwork is not TOO evident and therefore is not read as hair. If I work too big and the client reduces the work too much, that brushwork is lost and the face goes back to looking like velvet.

The full portrait. I am waiting for Mr. Silver's office to call...it's suitable for framing.
Latest
Napoleon for Smithsonian If Animals were like Humans Michael Brown for Esquire Je Suis Charlie The Boat Duck/Rabbit Illusion for Nautilus Arcadia Contemporary Soho Putin for the Wall Street Journal Adam Silver for Sports Illustrated The God Project for Stanford Magazine
Topics
Topics
Procrastinations
Archive
Image Galleries
Stuff I Do Photographs and Nonsense