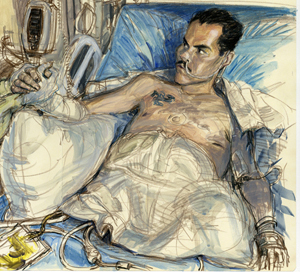 I remember back in the early 2000’s after our youngest son, Ben, decided to join the Marine Corps.  This was before 9-11.  This was before the term ‘cannon fodder’ started getting used again as we ramped up to another war.  It seemed a certainty to some that after 9-11 Ben would have a change of heart (he was doing lots of PT with his recruiter but was still in the zone where he could have chosen to drop out).  Instead it seemed to solidify his resolve.  Friends and acquaintances would ask in conversation, “How could a liberal kind of guy like you sanction a son going into the military?”  The answer was pretty short and to the point- he was doing something that gave his life meaning.  He was involving himself in something greater than himself.  Later on it was “But the war is so wrong.”  Well, maybe, probably, but one doesn’t get to choose their battles when joining the military, especially the Marine Corps.  It’s a different contract.  Many of us in the civilian world, certainly those of us in illustration, have the option to turn down assignments we don’t wish to do.  We’ll take them if we need to pay bills but ultimately we have that luxury of choice.

I have posted before about my work in the USAF Art Program, through the Society of Illustrators, drawing, and even painting, service men and women in training for urban warfare, Combat Control operations and Pararescue team exercises.  I’ve been fortunate enough, through the auspices of the Troops First Foundation, to travel to Iraq and Afghanistan drawing our men and women of the armed forces, far away from home and loved ones, in harm’s way, in hostile lands and have met extraordinary people with a sense of purpose and conviction that is humbling.

Purpose and conviction, however, take a truly profound test when the ultimate price is paid in the call of duty.  The test and burden, in those circumstances fall to the friends and loved ones of the fallen. I doubt few of us have passed through this life so far unaware or untouched by a tragic loss of life in the service of one’s country.  The grief is there and it is hard.

But the mind boggling miracles of modern medical care, of the rapid rescue and treatment of the critically wounded, has delivered many from what even a few years back would have been almost certain death.  The test in this growing community of severely wounded is the reclaiming of their lives and sense of contribution to society as they make that long, at times physically and mentally painful, slog through the rehabilitation process.  One could assume, and not without good reason, just by the sheer enormity of the challenge that lies ahead for these wounded warriors, that the saving of their lives has been a mixed blessing.  I must admit, that ambivalence existed in me.

For a few months now I have been involved in a documentation process started by Michael D. Fay, a combat artist and former Marine of over twenty years, of drawing and painting these wounded warriors.  It’s called the Joe Bonham Project, named after the tragic character in Dalton Trumbo’s “Johnny Got His Gun”, who is stripped of all his limbs and face, the result of an artillery blast, but retains his mind.  By eventually tapping his head in Morse code he communicates that he wishes his reality to be known to the outside world.  That wish is denied by the hospital staff.  It is an anti-war novel, set during World War I.  It is a tragedy.  But that idea of rejecting that notion of being hidden away from public attention is what drives the Bonham project.  It has gotten the attention of the Smithsonian and the artwork will eventually be part of the historical record of 2 wars, the longest in American history, where the price paid by these warriors has for the most part been a struggle limited to immediate family and friends.  The Society of Illustrators has also gotten on board with members wanting to be part of that documentation.

The ambivalence that I mentioned earlier has taken some hard punches to the head the more time is spent listening to the stories of these warriors while drawing them.  Most of my subjects have been Marines, as the Marine Corps seems the most open to telling these stories of valor and sacrifice, and their Marines have demonstrated remarkable lack of restraint in sharing their experiences in a matter-of-fact tone that has at times been unnerving, to say the least.  No self pity.  No “Why me?”.  The only concerns expressed were regarding choices made that impacted their fellow Marines, for those left behind outside the wire, and a not uncommon sense of responsibility for not being with their comrades.  All this while hooked up to tubes, IVs, catheters, and colostomy bags.  Sit with these individuals for an hour- no, a half hour- and you’ll find yourself becoming increasingly ashamed of every minor ache and pain you complain about during the course of a normal, essentially comfortable, day.  That phrase about ‘putting things in perspective’ though probably a cliché, is so true. Is the road for these recovering warriors an easy one with a made-for-TV happy ending?  No, it will be filled with hurdles both internal and external.  But the will to remain in the existential fight makes disappearing quietly into some forgotten darkness not an option.

It’s not just the fault of a culture more interested in ‘reality TV’ than reality.  It has been the governmental policy in the course of the past decade to keep these battlefields far from the public mind. Shopping was equated in some perverse way to patriotism and sustaining the ‘American’ way of life and ‘freedom’.  The rules about showing video of caskets returning home have just recently been relaxed.  A “Warrior Class”, the result of the ending of a draft and the creation of a volunteer army, quickly evolved out of the tradition of ‘citizen soldier’.  In short time these individuals became, in a way, a separate entity from the main of society.  Their experiences and struggles became less a community concern and more something limited to immediate families.

Ironically, and surveys have confirmed this, the one institution in this country that receives near unanimous respect and admiration is our armed forces.  Forget about Congress and the Presidency.  Forget about sports stars- overpaid, whiny, and just one step away from jail.  Forget about the obsession with celebrities- they’re just disposable fodder to be replaced by the next train wreck waiting in the wings.  The members of our armed forces have largely maintained a degree of duty and purpose that so many in our contemporary culture of instant gratification seem to lack.

These drawings are but the beginning of an endeavor to document the sacrifice of our wounded warriors.  As we enjoy the barbeques and festivities this Memorial Day let us keep in mind the price paid by a small- no, minute- percentage of our citizenry, who have chosen to serve to protect our country and, as a possible consequence of that choice, pay a price none of us in the civilian world would even wish to contemplate.  “Thank you” is the least we can say. 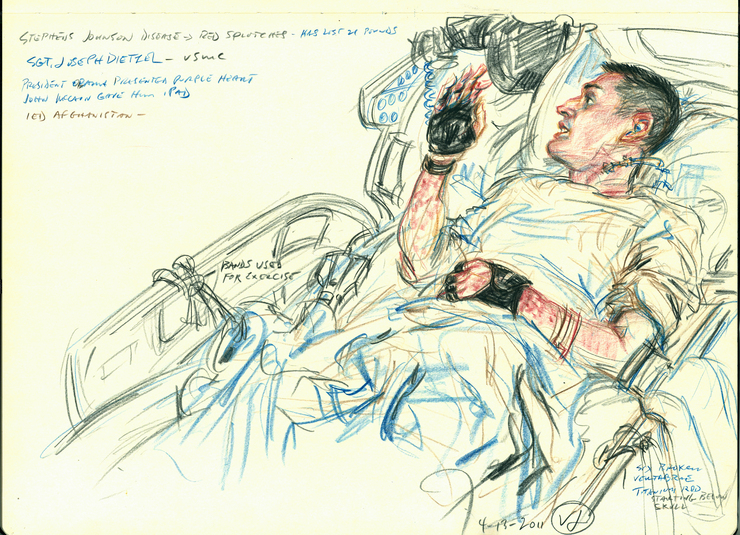 Sgt. Joseph Dietzel decided to take a different route, making a perfectly reasonable assumption that his team's daily travel pattern had become predictable and that they were sure to get booby trapped on the road. His choice proved incorrect and his mini MRAP (Mine-resistant ambush protected) hit an IED that killed his driver, and close friend. With six crushed vertabrae he still managed to get out of his vehicle and walk a short distance before collapsing. He was actually making very impressive headway in his recovery, even walking, when he was set back with an opportunistic bacterial infection called Stephens Johnson Disease. It covered not only his entire body with measles like welts but inside his throat as well making eating impossible for a week. He had lost over 20 pounds when Michael Fay and I visited him at Maguire VA Hospital in Richmond. He seemed genuinely troubled with his decision to take a different route which resulted in the death of his friend and driver. His sister Maggy took off from her job in Tokyo- she left two days before the earthquake/tzunami- to be with her brother. Their close bond was immediately obvious. 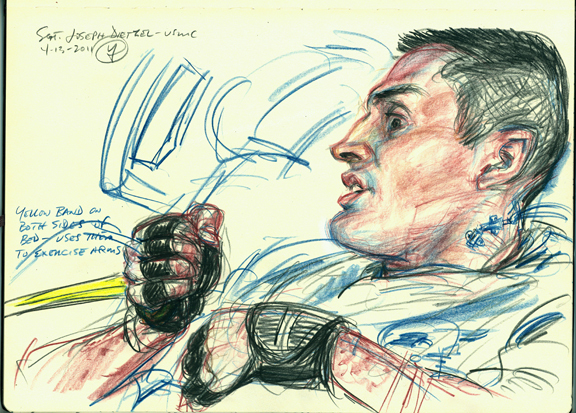 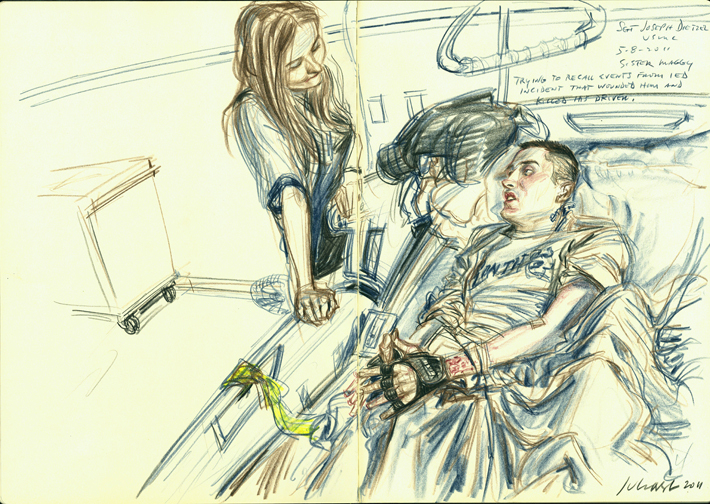 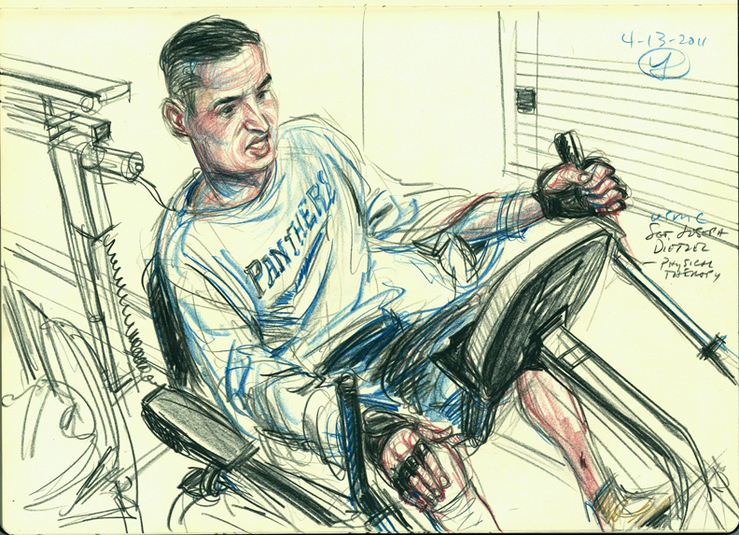 Weakness made physical therapy both uncomfortable and exhausting for Sgt. Dietzel but he pushed himself. 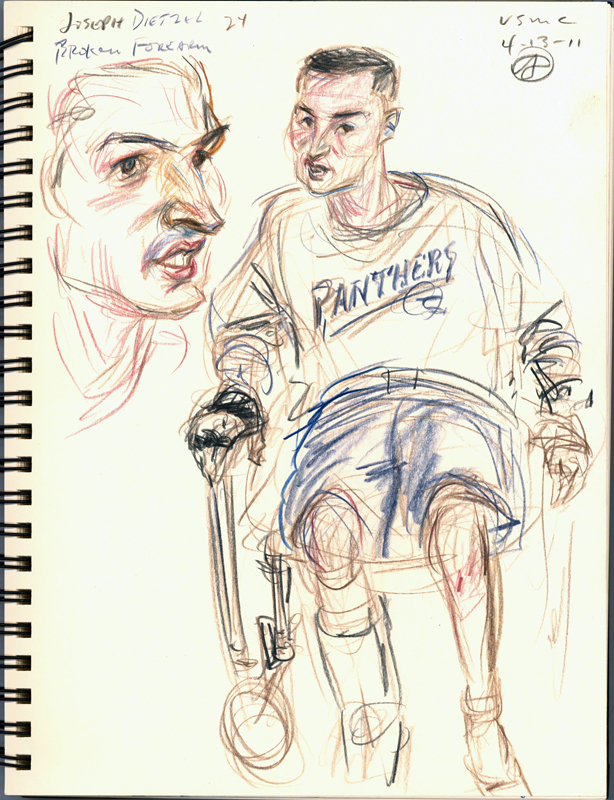 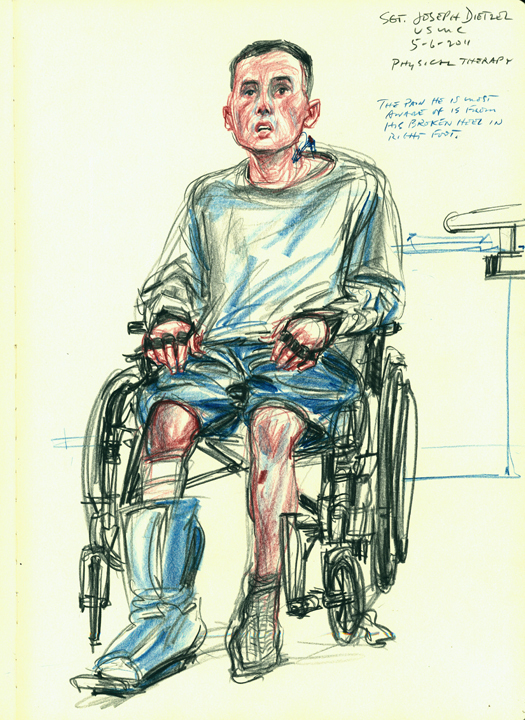 It was difficult at times to imagine this frail sweet mid 20's man as a heavier, strapping Marine sergeant. 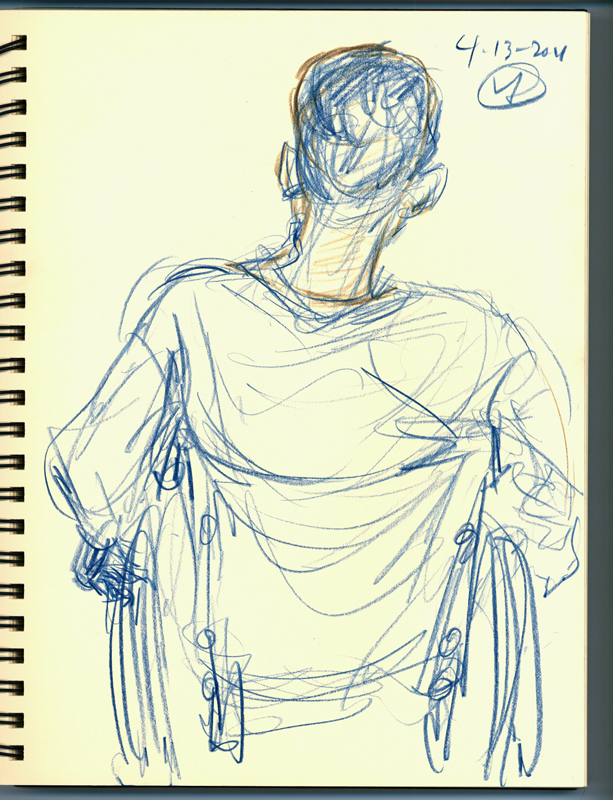 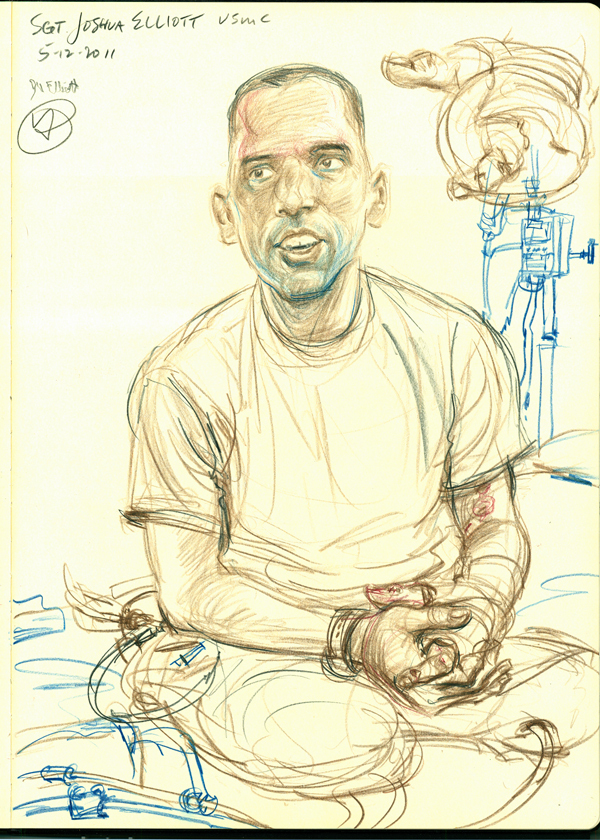 Sgt. Joshua Elliott could have been telling you a story of some wild ride on a horse for all the enthusiasm in his voice and energy of his behavior. The IED he missed on the roof of a building blew him straight through to the floor below. He kept calling until his other Marines figured out where the voice was coming from. Joshua had remarkably precise recollection of the event and said he fought hard to remain awake during the rescue, knowing that if he fell asleep he'd be history. Both legs lost mid thigh and most fingers blown off left hand. 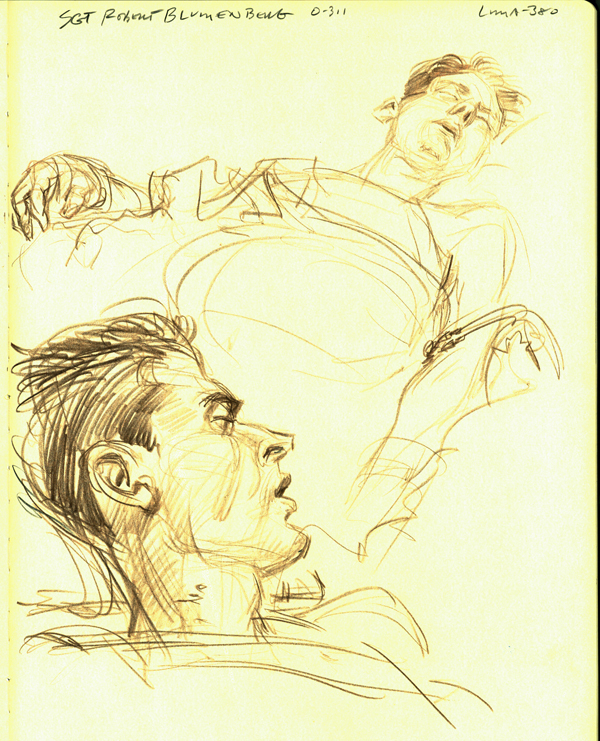 We never got a chance to speak with Sgt. Blumenberg. He was in a deep but fitful sleep while we were there briefly drawing him. Suffered serious internal injuries from an IED. Most everyone we saw was injured by IEDs. 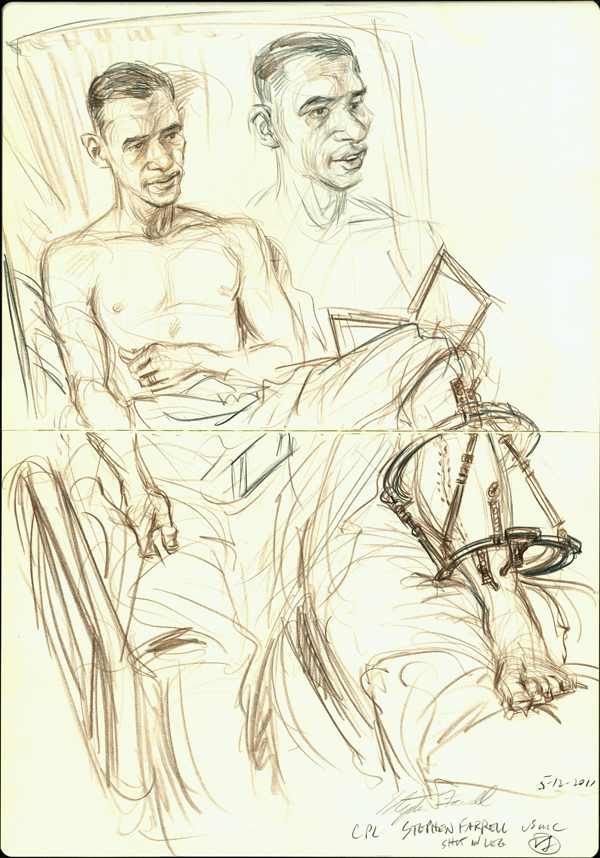 Cpl. Stephen Farrell- a genuine Louisiana hell raiser- in a good way. He was funny and he was no fool, keeping his laptop by his side and checking for email while talking to us. 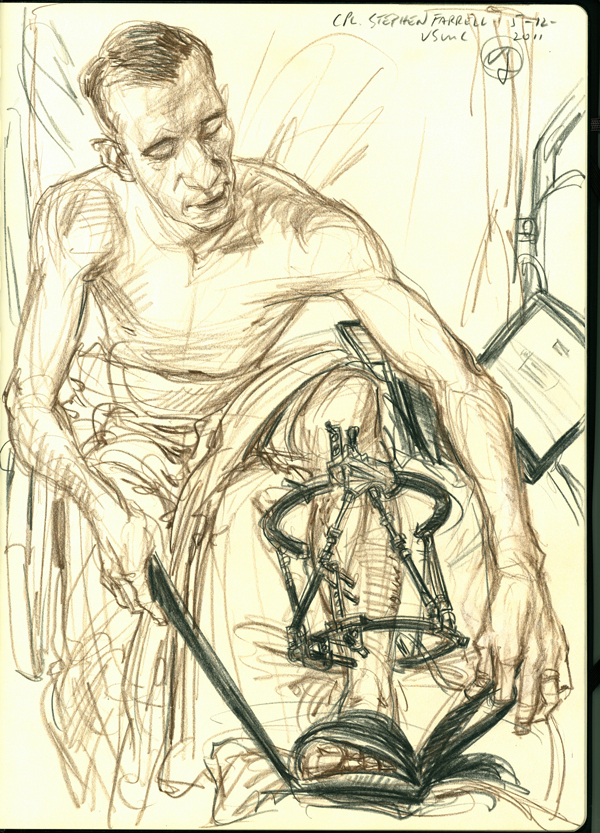 I asked Cpl. Farrell if those rods were actually embedded in his skin. "Skin? They're straight in the bone." 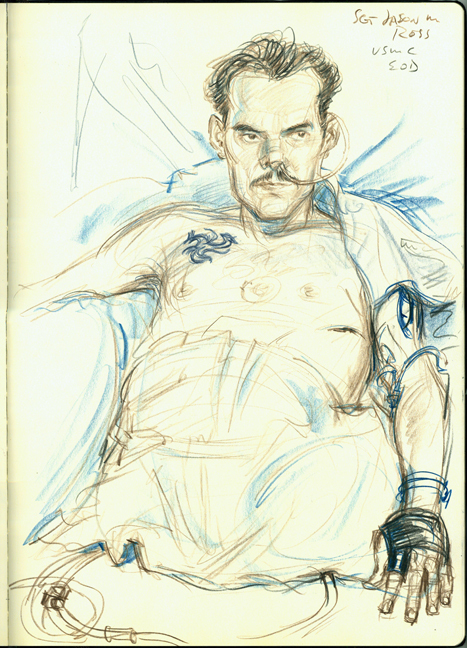 The Marines, as a rule, have been very willing to be drawn and interviewed. One was immediately struck by the cool intensity of Sgt. Jason M. Ross of EOD (Explosive Ordinance Disposal). I mentioned to him that he had a Charlie Sheen vibe to him- not the crazy, drugged out Sheen- but the more laid back yet intense Sheen from some of his best roles. He sort of squinted and took the comment in stride though I'm still not sure if he interpreted that as a compliment. It was. Fellow Society member Jeff Fisher and I left the room feeling very much like we had been hit with a two-by-four of character. 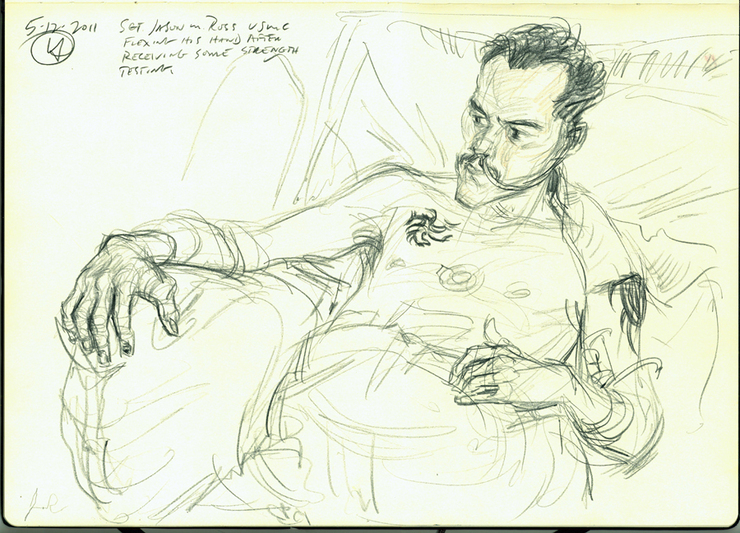 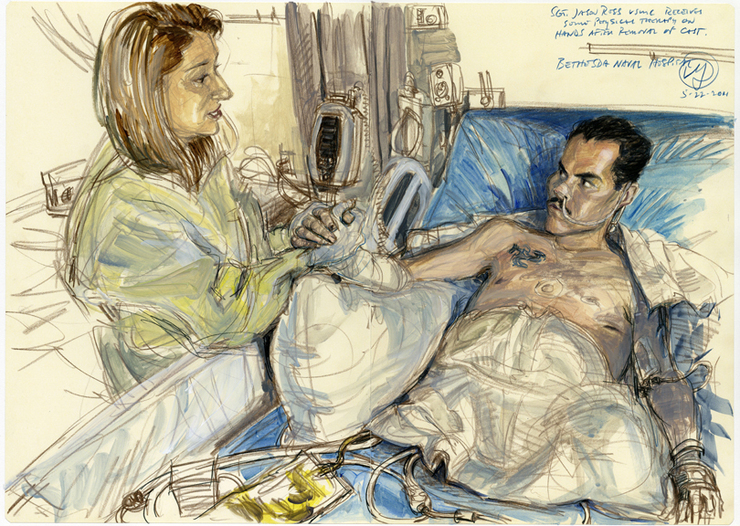 The physical therapist had just removed the cast off one arm and was testing the flexibility of then hand and wrist. It was evident from Sgt. Ross's expressions that it did not feel good. But he was game. His surgeon paid a visit while Jeff Fisher, Michael Fay and I were drawing him. Outside the room she reiterated her awe of Sgt. Ross, classifying him as her most extreme case to have survived an IED since 9-11. She ascribed his survival to the tenacity of his spirit. 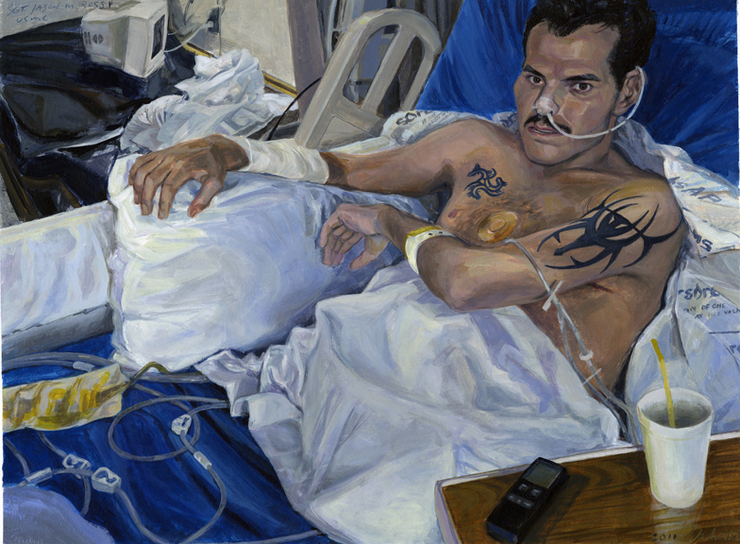 The tattoos are Sgt. Ross's designs. He seemed quite proud to display them. If I had a fraction of his resiliency I'd feel qualified to sport one of those myself.
Latest
In the Company of Marines continues Invested in Portraits Three for John Bolton The Bigly Rolling Stone Cover The Prodigal Son Returns- In the Company of Marines- Part 1 The Prodigal Son Returns- Part 2- On the Bataan with the 24MEU Keeping Busy- Part 9 Good News and Bad News Goin' Down, Moses- Keeping Busy Part 8 Catching Up- Yup, Still Busy No Clown Cars
Topics
Topics
AT YOUR STANDS NOW
Archive