The 36th District Court of Detroit 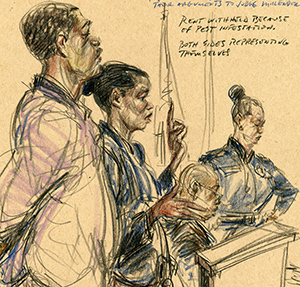 Mary Parsons, one of my favorite art directors, called to check on my availability to do some drawings for The American Prospect in a ‘courtroom style’ for a feature piece by journalist Kat Aaron who spent several years following the workings of the civil court division- in particular the court that handles tenant/landlord/homeowner/bank disputes.  It’s a very strong, empathic and nuanced piece of writing that inspires a sense of sadness and despair as well as some hope amid desperation.  It’s difficult enough being on the low end of the social rung; attempting to defend yourself against attorneys and banks because you can’t afford representation while being pretty much ill equipped in working the system must be a nightmare.  There are no real good guys or bad guys in the black and white sense.  It’s a world of sad stories and sad lives coming apart and being dumped in the statistics bin.  There but for the grace of god go most of us.  A change of fortune, loss of employment, failure to pay rent or mortgage, maybe add some bad life choices and you are screwed.

I received the copy from Mary and after reading it, and especially after finding unsatisfactory visual reference on this court in Google, thought, “Well, this is crazy.  Why fake courtroom drawings when I have the chance (didn’t know that yet) to go there and draw the real deal?”

Detroit is a 14 hour drive, factoring in bladder stops and food, and we had enough lead time for me to take a few days off and make the journey. I pitched Mary my idea.  The story and setting were so specific that to attempt generic scenes seemed pointless.  After initial hesitation- travel expenses weren’t in the budget, a point I brushed off- Mary signed on.  She hooked me up with Kat who helped provide some background to the protocol and preamble with the court administrator she worked with.  It was to turn out while on my drive to Detroit that Kat texted me to say that her contact person in the public affairs was no longer there.  My response was, “Improvise, Adapt, Overcome.”  I’d make it work once I hit town.  There was enough in her article that essentially gave me the heads up on what to expect from the officers and public affairs personnel, and it wasn’t all positive and cooperative.  I was feeling pumped and upbeat nonetheless.

My hotel was just a ten minute walk from the courthouse and I was there soon after opening hours the next morning.  I knew what I couldn’t bring- cell phone, camera, any kind of recording device and any paraphernalia connected to them.  Those items would need to be brought back to the hotel or car (were you to drive and park at the lots nearby) or trashed in order to enter.

There certainly were a lot of people filing their way through security on their way to finding out which designated courts their cases were assigned.  I made my way through the metal detector- had my bag of drawing materials inspected- and headed over to the information booth. I explained what my intentions were and asked what courts I needed to look for. The officer behind the counter couldn’t have been nicer or more helpful (Actually, I found the general attitude of the court officers quite friendly while making sure everything was done properly. A smile and proper respect probably didn’t hurt to generate that response.).  He came out from behind and got the list for the day from one of the officers at the metal detectors, explained which courtrooms I needed to go to and on what floor.  I headed up there and walked into one of the three available.  Court was already in session.  I took a seat near the rear with the intention of taking that deep breath and simply getting a feel for the environment.  I had set aside a couple days so as not to feel the need to rush into drawing immediately before digesting the scene.  Without missing a beat from her deliberations on the bench, Judge B. Pennie Millender looked over her glasses and announced, “We have a visitor.  Have you signed in yet?” All eyes turned to me- about the only white face in the room- and I replied in a parched voice that I was just there to observe.  “Oh, well observe away.”

I sat and watched the stream of humanity come up before the bench and explain, often in very awkward, unhelpful manner, their cases.  Judge Millender was patient and often attempted to bring clarity to what the defendants were trying to say, even as she reminded them of their rights and procedure.  There was also a sense of underlying humor in her demeanor that probably helped to keep everything from turning into a sort of Dante’s Purgatorio. She was no nonsense but not without compassion.  Judge Millender was not one of the judges spotlighted in Kat’s story- in fact they had all been assigned other courts- but she seemed to fit Kat's profiles of bench personalities.  About 45 minutes into the hearings I finally pulled out one of my pads and started scribbling away.  I didn’t like my vantage point but intended to make lemonade out of the lemons and not call attention to myself.  About 45 minutes into my sketching, one of the court officers walked over to me and asked what was I doing.  I told her my mission.  “Well you can’t do that.”  “I can’t draw in court?”  “Not without proper permission.”  Suddenly, another taller, more armed, officer showed up and I was asked to leave.  As I walked out he repeated the questions and I repeated my intentions.  “Did you get proper clearance?  Come with me.”  We went upstairs to meet the deputy court administrator, Angela Hampton.  I explained my situation and what I was looking to accomplish.  When I mentioned the story written she asked, “Is this the writer from Washington?”  I answered yes.  “I know her from emails.”  So I sat for a while signing forms and courtroom protocol instructions. I was told that because there might be undercover officers and witnesses in the hallways I was not to draw there as well as at the security station at the entrance. There seemed to be a concern that I would get too specific in my drawing and identify someone who shouldn't be spotlighted.  This was a drag as some of the more poignant scenes were what was going on outside the courtrooms.  Still, everyone was very pleasant and once the paperwork was signed I was brought back to the courtroom where proceedings halted while I escorted to the bench and explained my mission and intentions.  Judge Millender said she had no problem with my being there and asked around.  She then invited me to sit in the witness stand as there were no jury trials on the docket.  Much better vantage point for sure. The courtroom had emptied out considerably by then but there were still enough cases to hear. I settled in and sketched.  This went on for a while until a halt came to the proceedings and Judge Millender switched with Judge Wanda Evans.  Judge Millender called me up and introduced me to Judge Evans who also expressed no reservation to me drawing and repeated the invite to sit in the jury box. The judges along with their staffs were gracious and accomodating to this stranger and I was grateful.

Kat’s story seemed to indicate that these cases were huge in number and the traffic before the bench endless.  It was just my weird luck that for the two days I was there the hearings were uncharacteristically light and quickly dealt with.  My concentration had to be on point as much as possible and without a camera to back me up many sketches were aborted because the cast of characters were gone in the space of a two minute pose.  Still, I managed to get in some visual observations that spoke to the circumstances of these plaintiffs and defendants.  Judge Evans presided on the second day there and after a quick paced clearing of the dockets which surprised even her, she turned to me and said she would check if there was anything else for the day elsewhere in the other courts.  There weren’t.  I thanked all and made my exit.

What I brought back and forwarded to Mary made enough impression that the number of spots doubled for the feature.  It was a great assignment and I quite frankly enjoyed the experience in Detroit.  The courthouse was less than a stone’s throw away from Tiger’s Stadium and the pennant was on the first night I was there.  It’s a wonder that I was able to find hotel space.

From my brief walks through the downtown I was struck by its scruffy beauty and by the truly striking art deco architecture mixing in with the modern.  My nephew who lives nearby gave me a nighttime tour.  It’s sad that Detroit has fallen over the decades on such hard times but things seem to be changing for the better and businesses are setting up again.  High tech more than auto industry related.  But that’s how things evolve.  Hopefully there will eventually be a new Renaissance for Detroit.

I want to thank Mary Parsons for calling me in on this assignment and being flexible enough to let me take the ride out to document on the spot, Kat Aaron for her assistance, and, in particular, note the courtesy and helpfulness of the judges, court staff and court officers at the 36th District Courthouse.

The drawings and story will appear in the November/December issue of The American Prospect. 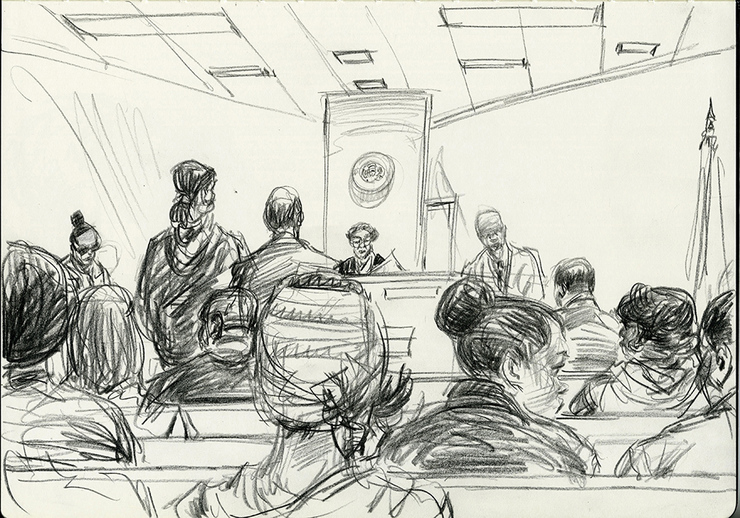 Opening visual observations. The drawing I was working on before being escorted out to meet the court administrator. 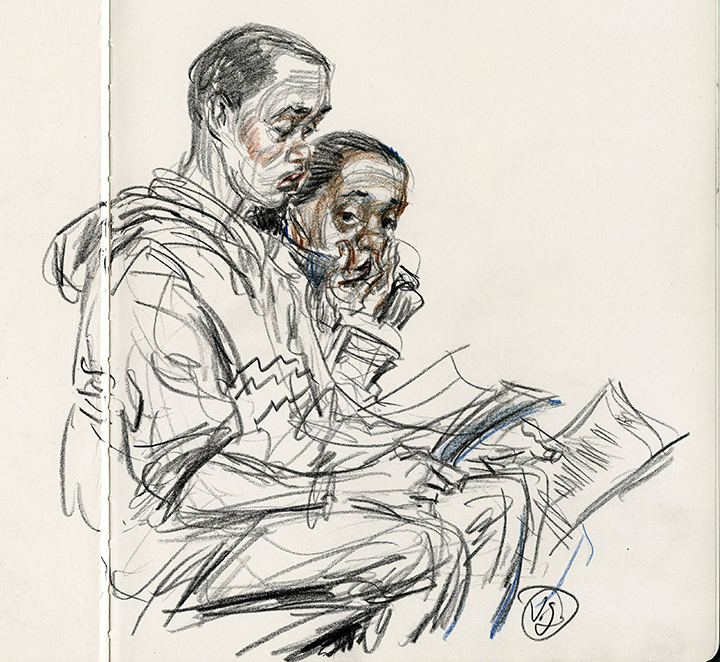 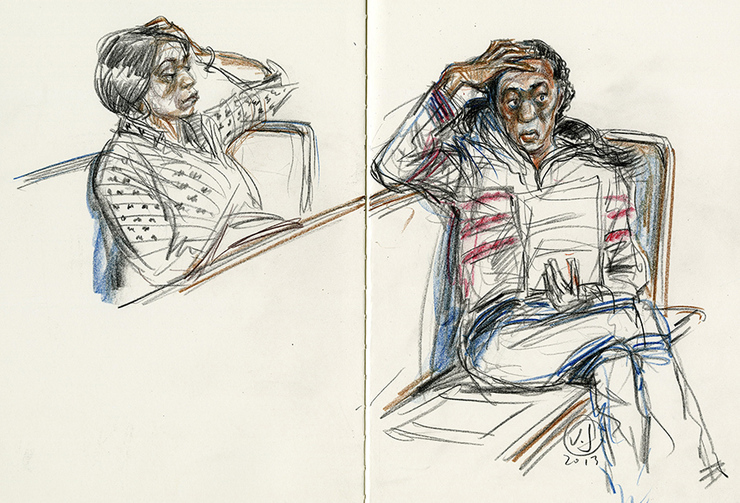 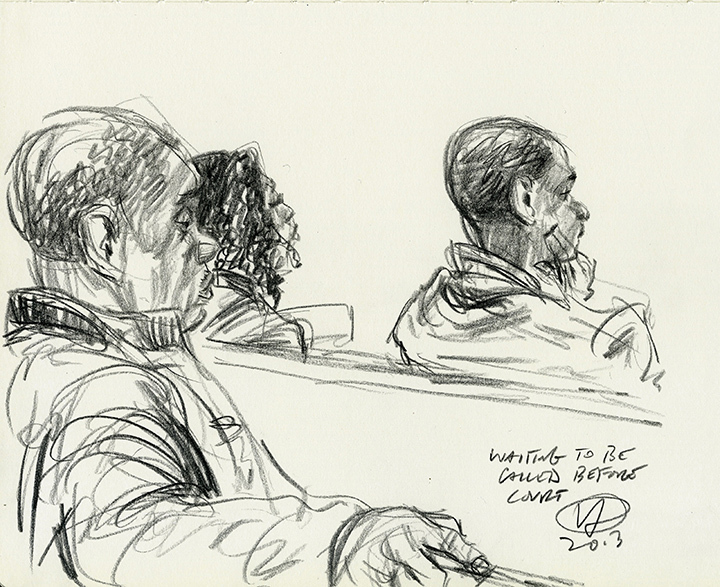 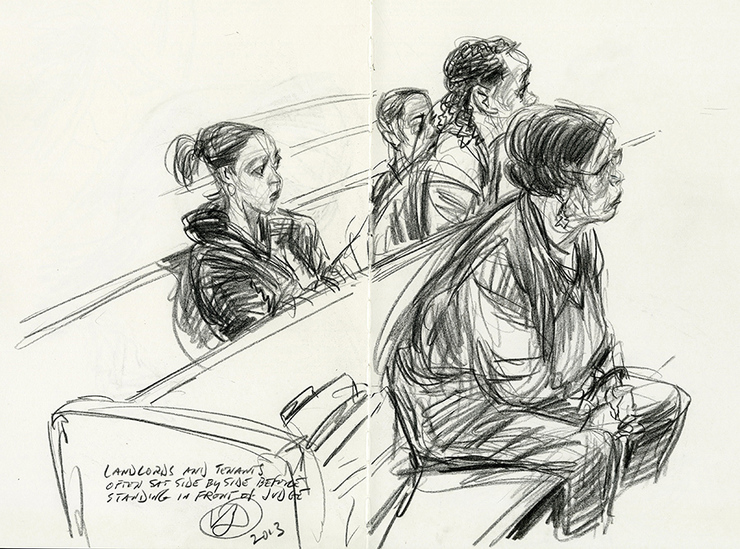 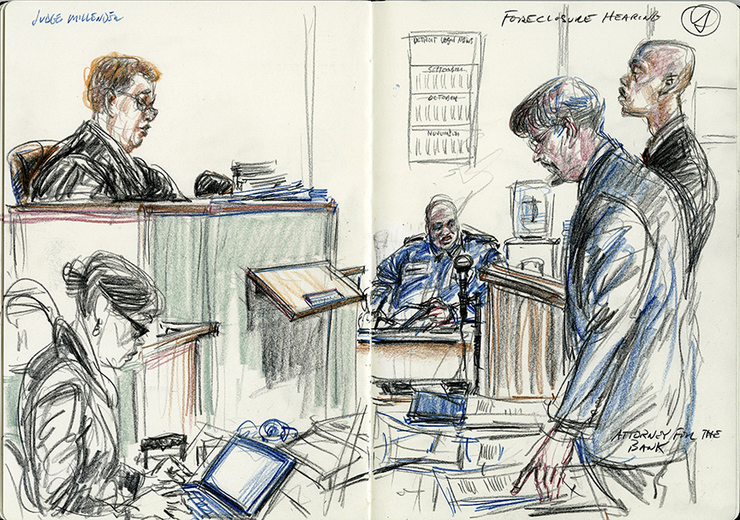 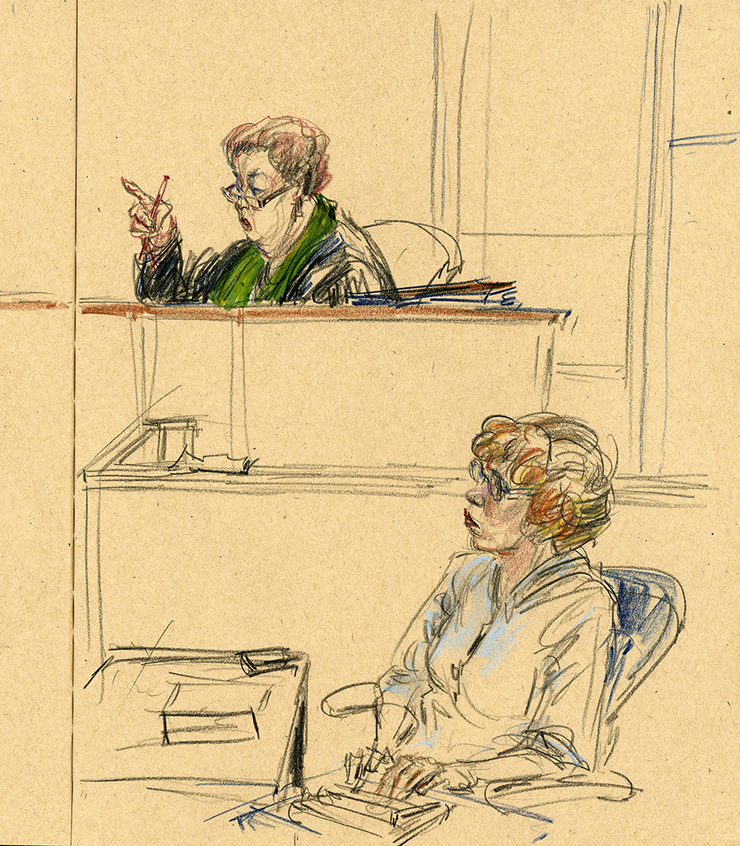 Judge Millender. She possessed a very relaxed, patient, and friendly demeanor even as she attempted to get clarity from defendants. If they started going off on tangents she'd gently pull them back to the matter at hand. 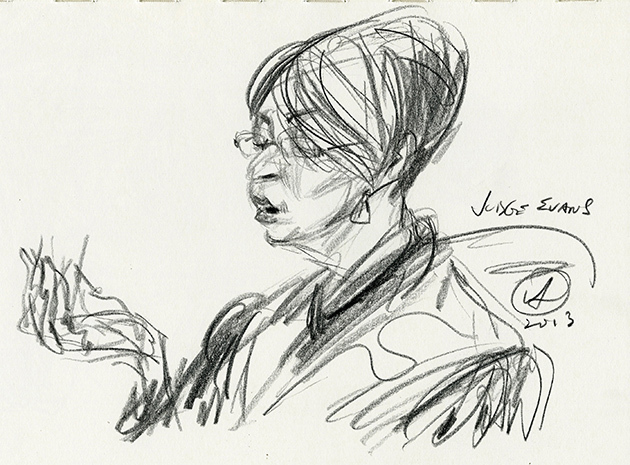 While Judge Evans showed less patience with rambling and was quick to keep the plaintiffs and defendants on point answering the questions they were asked she remained gracious and attentive. 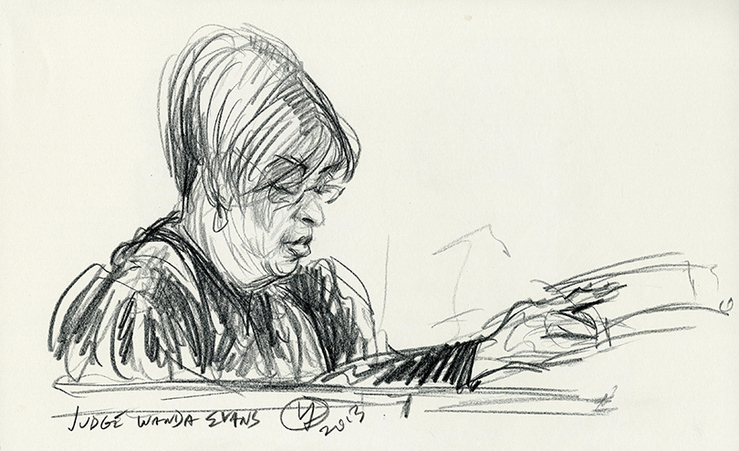 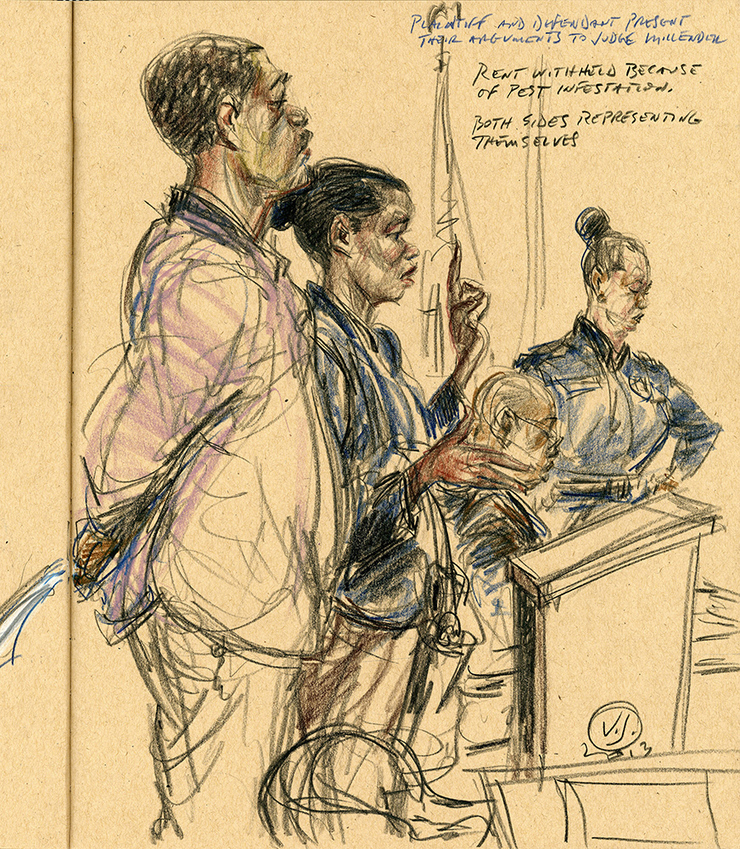 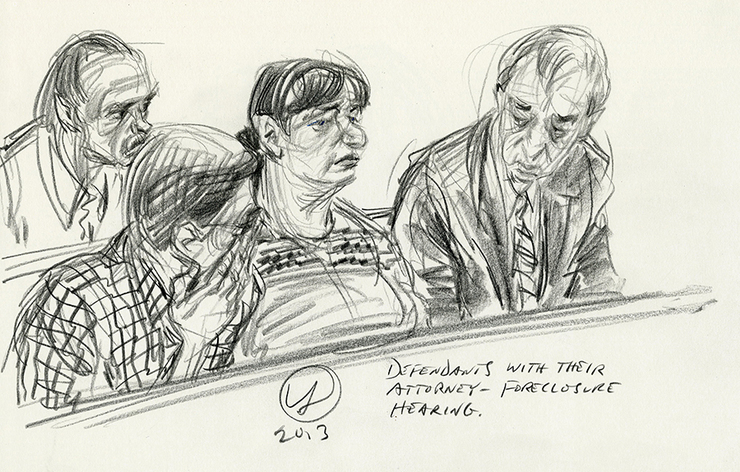 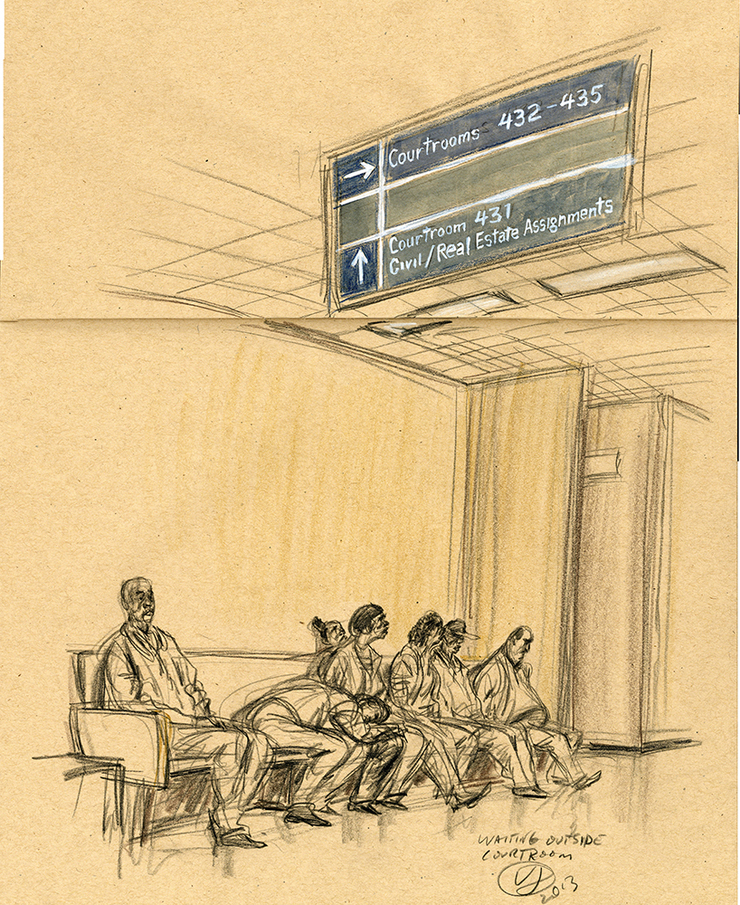 While I didn't 'draw' in the hallways during the waits, I made mental notes and quick placement scribbles. I'd go back to the hotel and try to replicate these ghosts. Treated them more as impressions and didn't concern myself with details. There was a poignancy in seeing people- any number of whom were taking time off from work- never a safe move- sitting, waiting to find out what new challenge they were going to have to deal with. 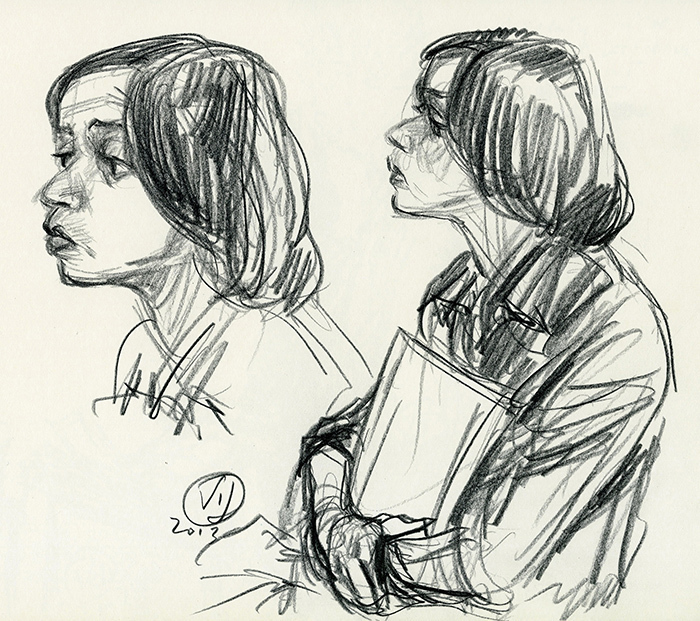 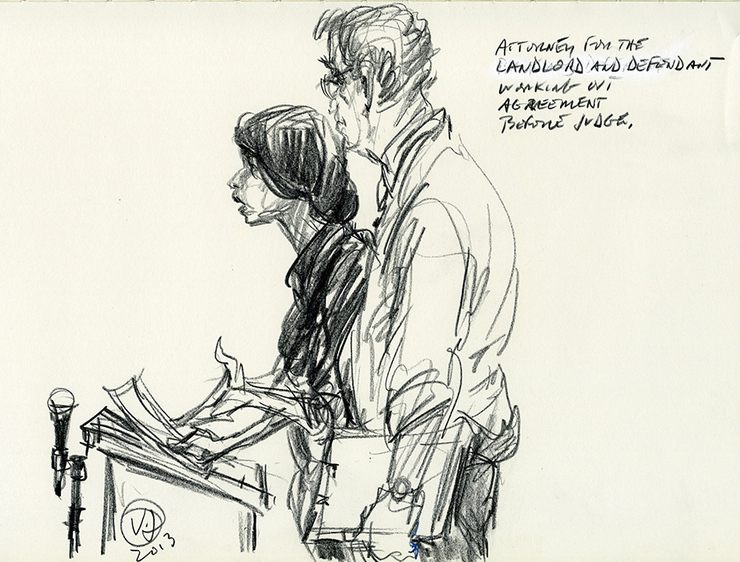 This young woman looked like a college student and the case- apparently revolving around repairs and shared costs- seemed like a huge misunderstanding more than any deliberate nonpayment of rent. 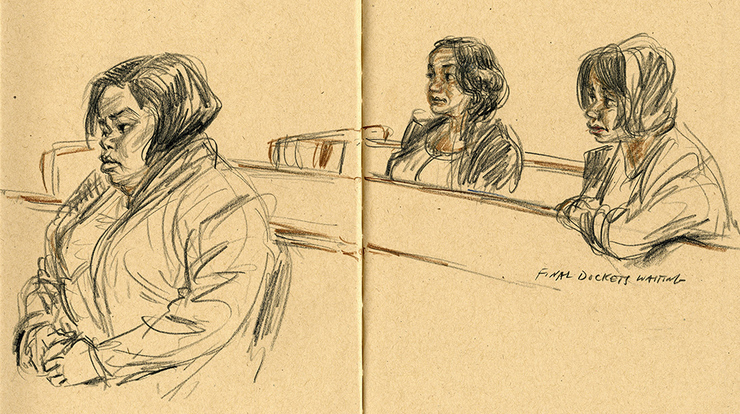 The day ended quick enough though to be last in line is still last in line.
Latest
In the Company of Marines continues Invested in Portraits Three for John Bolton The Bigly Rolling Stone Cover The Prodigal Son Returns- In the Company of Marines- Part 1 The Prodigal Son Returns- Part 2- On the Bataan with the 24MEU Keeping Busy- Part 9 Good News and Bad News Goin' Down, Moses- Keeping Busy Part 8 Catching Up- Yup, Still Busy No Clown Cars
Topics
Topics
AT YOUR STANDS NOW
Archive