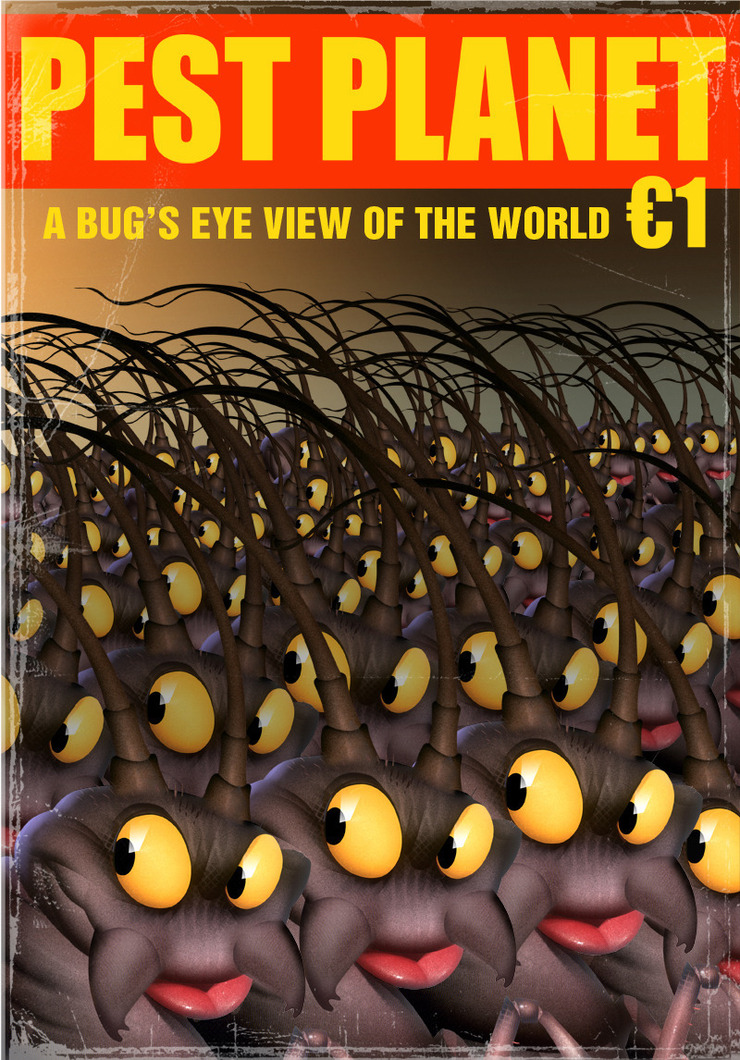 What I was trying for was a Old "Pulps" Cover from-the-20's feel.... Goose-stepping bugs on their way to conquer the world.
Click Here to see All Final Images.
When Mathew Willis / Blue Print Partners, Amsterdam called me about working on this project , it was a simple reuse of some illustrations I had for a project with Shaun Hawk, at McCormick. Blue Print is a Public relations firm who were given the task of trying to come up with a brochure to help sway public opinion about pending Euro legislation that would curb pesticide use . It started as a single page comic in the form of a direct mail piece. We went over the project and decided to produce a little underground comic instead. Address the pending legislation, twist the story a little, as rising food cost. Since they didn’t have an art director I assumed that role and along with a writer Robert Roth we adapted the existing bugs and a couple of new ones into a story line . The Bugs would go on an eating holiday across Europe. Although the original copy reflected more of a world domination theme that was a bit scary to the Euro market so the eating holiday won out.

Original bug developed for a series of trading cards, promoting Dupont. (Agency: McCormick, Art Director: Shaun Hawk), and then how it was developed into the "Pest Planet" cover. ÃÂ© Bill Mayer 2010 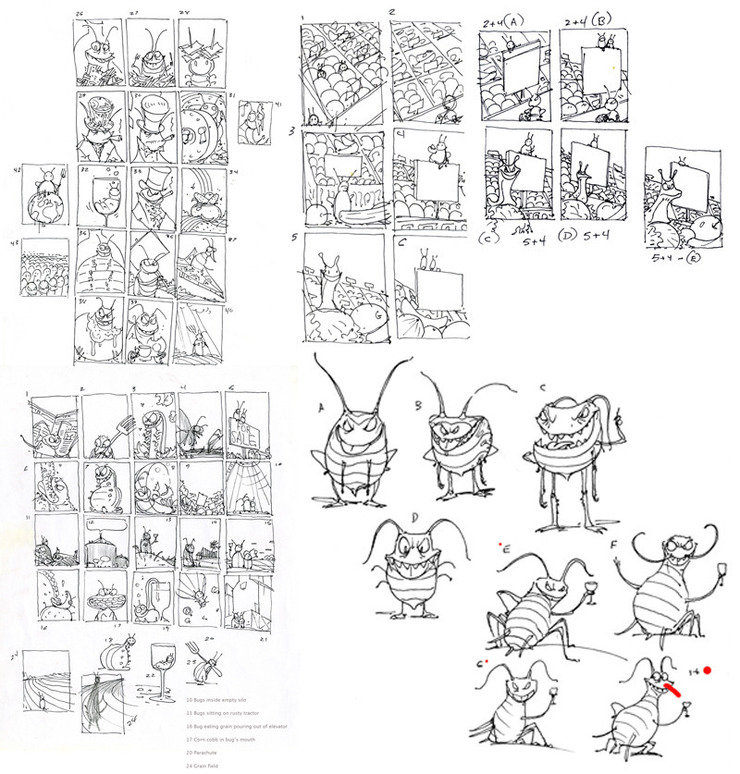 Here are some of the thumbnails figuring out a sequence and story line . 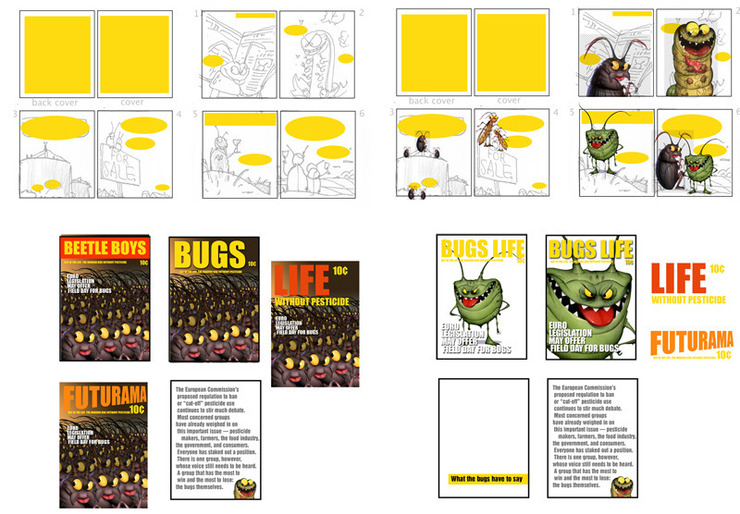 page layout, and rough comps. Trying out some different names. Showing how the existing bugs would fit into the drawings.

Expiramenting with different variations of names and images for cover illustration. I really liked the idea of "Bugs Life" but kept thinking "This sounds so familiar!" until we remembered the movie of the same name... So we settled on "PEST PLANET."
These are low res comps just to give the director an idea of what the cover could look like..
Some of the other possible names for the comic included:BEE-BOY, HONEY BOY, THE BEE’S, B, BUTT MUNCH, BEE-BO, BUGO, BUGGABOO, BUG OFF, BUGGER, CRICKET, TWITTER, CREEPY, CRAWL, SWANK, INSECTO, INSECTO-RAMA, BUG BOY, BUGGY, PESTO, PEEVE, VEX, MICROBBE, BUGO-RAMA, TASTEE WORLD, THE STAND, BUG LAND, BEE-TLE BOY, INSECTIVOR, FUTURAMA, HOUSE AND GARDEN, LADYBUG JOURNAL­.
What we were trying to do was create this, kind of, underground comic, that would be something people would find at coffee shops, and sit down and read... Create an awareness of the problems that the rising food costs could create..
Yeah, yeah, I know.. Working for the man...
Click Here to see All Final Images. 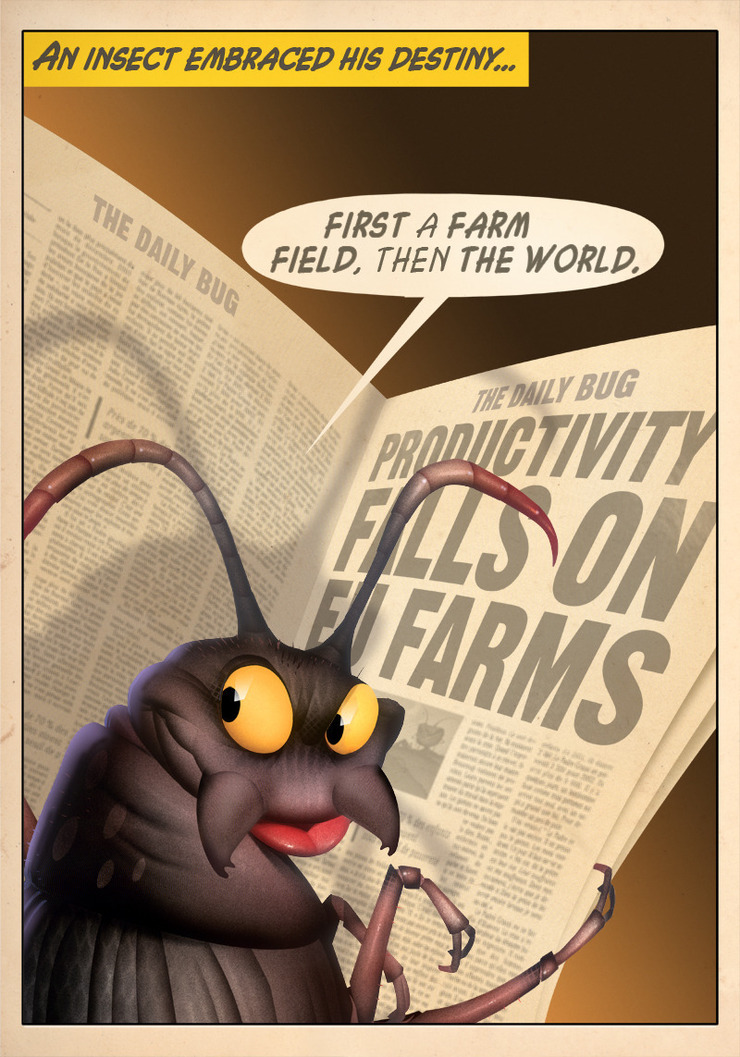 one of the inside illustrations. Same bug, now reading a newspaper, plotting his takeover.
Click Here to see All Final Images.