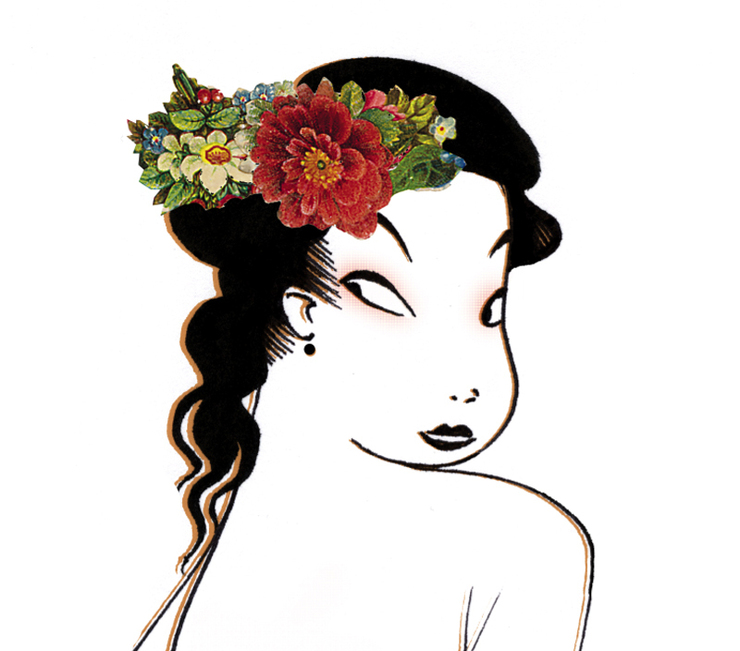 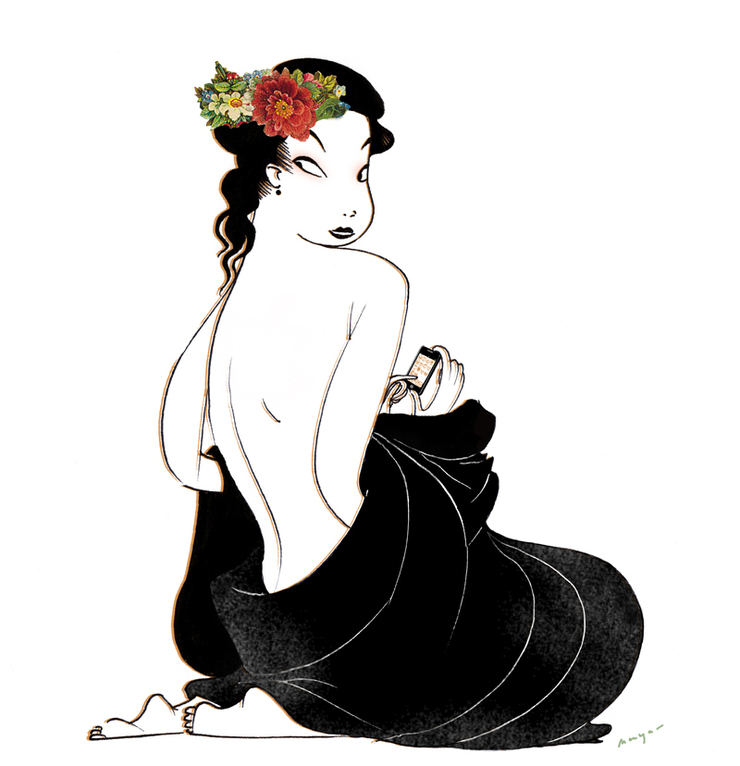 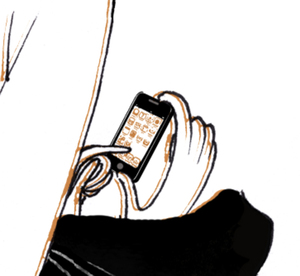 The Lady in the Kimono was a simple illustration that went through several concepts before I landed on this one. The Idea was to do a kind of traditional Japanese lady in a Kimono holding a little iPhone. I had been playing with the black and white drawing with the collage elements worked in. Most of the time, the collage elements actually have more to do with the concept, but in this case it was just decorative. I loved the graphic line and old clip-art pieces thrown in. The diference in this and the stamp drawings was that the drawing came first and the other elements came later. With the stamps, they were always the first thing on the page and then I would come back and draw over them. I guess it works both ways.

The Hanging....Naturally ÃÂ© Bill Mayer 2010
The Hanging is another little collage illustration: taking a somber image and using contrasting collage pieces to bring humor into a rather bleak subject. Lee is not going to like this one, either... I can't show thumbnails or sketches because this is just a little thumbnail itself.... 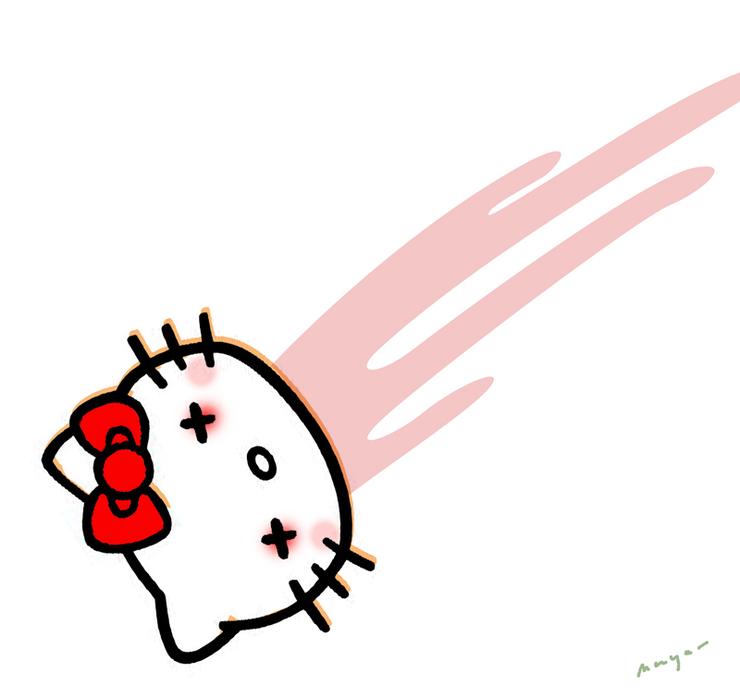 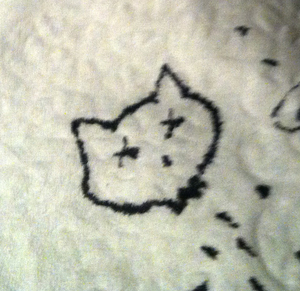 I did this little Cat piece trying to solve a little problem with a nice rat illustration I had that had no concept, just a nice rat.. Seemed natural to pick another celebrity cat to use. My first thought was Felix, and then Lee mentioned Hello Kitty... seemed like a great fit but after wrestling with how to make it work with the rat, I just decided it worked much better on its own. We were walking down to the Brickstore Pub to meet some friends, so I doodled this on my napkin to remind me.... Goodbye Kitty... Seemed like such an obvious idea, although Yuko Shimizu designed Hello Kitty for Sanrio, so for sure there needs to be heavy credit to them... all I did was add pink blood.... 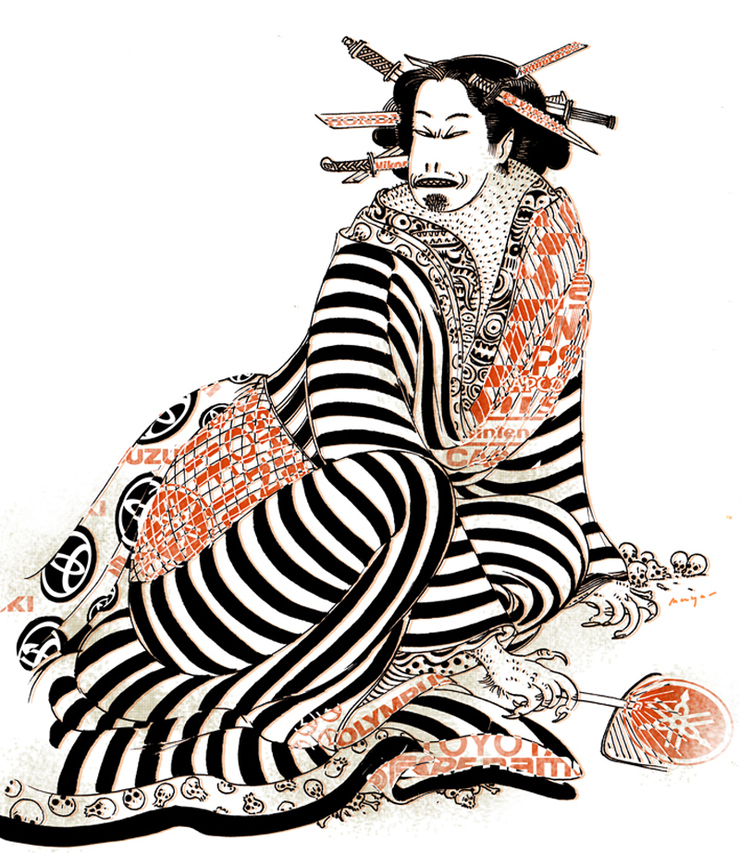 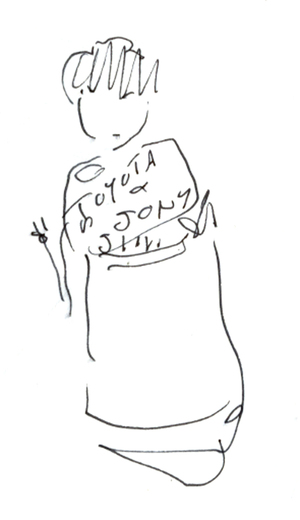 This little drawing I came up with at the same time as the cat. Most of the time, when I am laying there thinking of little ideas I just roll over, go back to sleep and forget about them, but this time I actually sketched a little hieroglyph in my sketchbook to remind me. I love the traditional wood cuts from Japanese artists of the ninteenth century. This little drawing was influenced by one of Kiyomitzo's, but instead, the beautiful girl is replaced by an Ogre and the patterns woven with Japanese corporations. An attempted metaphor for the the new direction of a more aggressive Japanese business climate?
There are snakes under those Kimonos... and they have teeth... 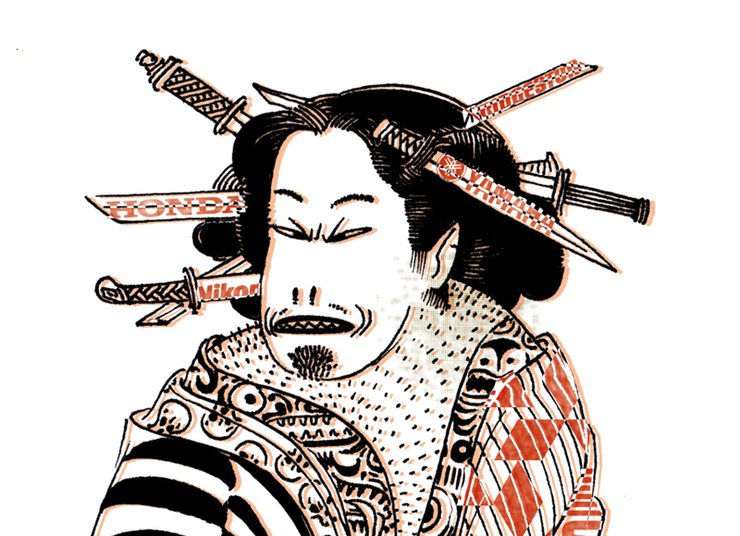 Close up of the head so you can see the corporation names woven into the drawing... " The New Japan" ÃÂ© Bill Mayer 2010 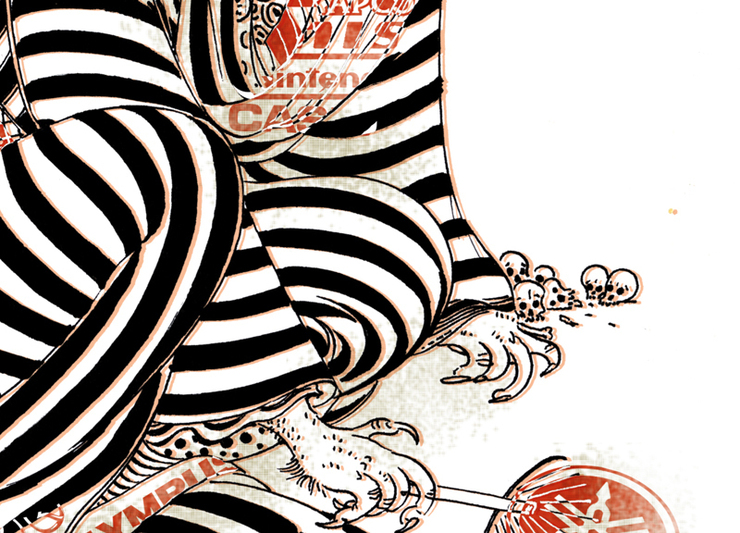 I tried to make the hands ugly and distorted, with long nails and little piles of skulls of the competition lying around hidden under the robe ÃÂ© Bill Mayer 2010 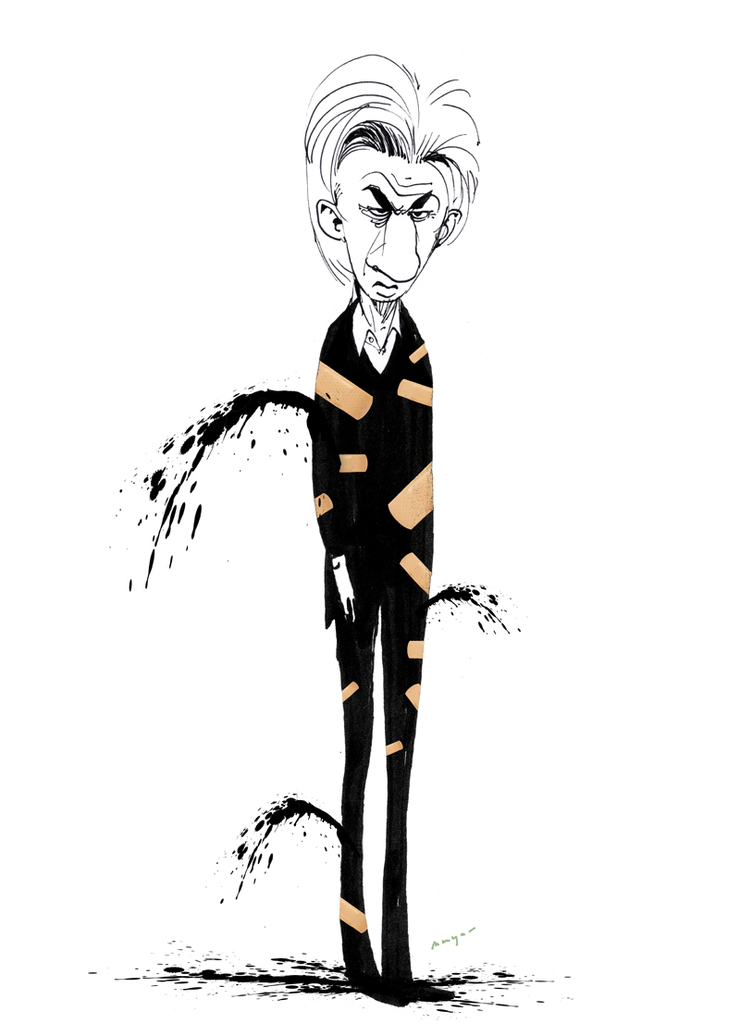 Da Leakie Mon... ÃÂ© Bill Mayer 2010
And on my ongoing quest to get the portraits better, here's a little "Leaky Man" of WikiLeaks Founder Julian Assange. I always loved those old cartoons, where the guy gets shot in a few dozen places and walks away, only to drink a glass of water and have it spout out from the bullet holes... old clichés never die... seemed so appropriate.