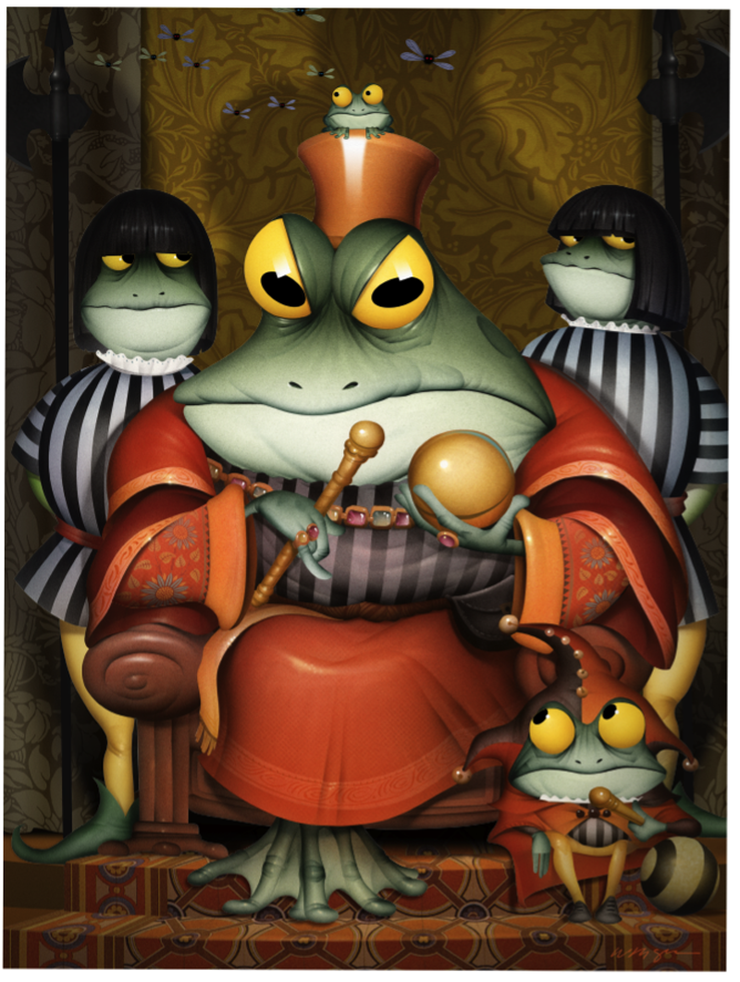 Here is the final illustration with everything put together....This illustration was so complicated I didn't see how the silhouetted figure in the foreground was going to work..... ÃÂ© Bill Mayer 2011
Always the highlight of my year, I can count on Jim Burke to come through with another opportunity for a new frog. This year, like last, it was just too hard to stop drawing new candidates for the calendar. Some in expected directions, some in the line style I have been experimenting with, and some revisiting things I stumbled onto last year. Truth be told, it's just an excuse to do some frog drawings just for fun. 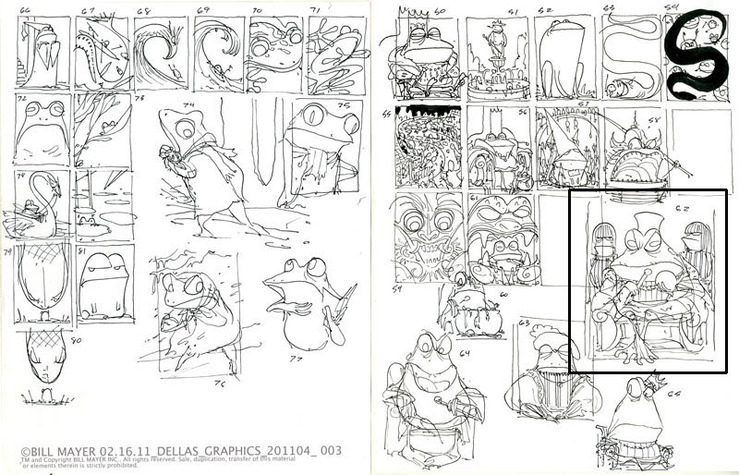 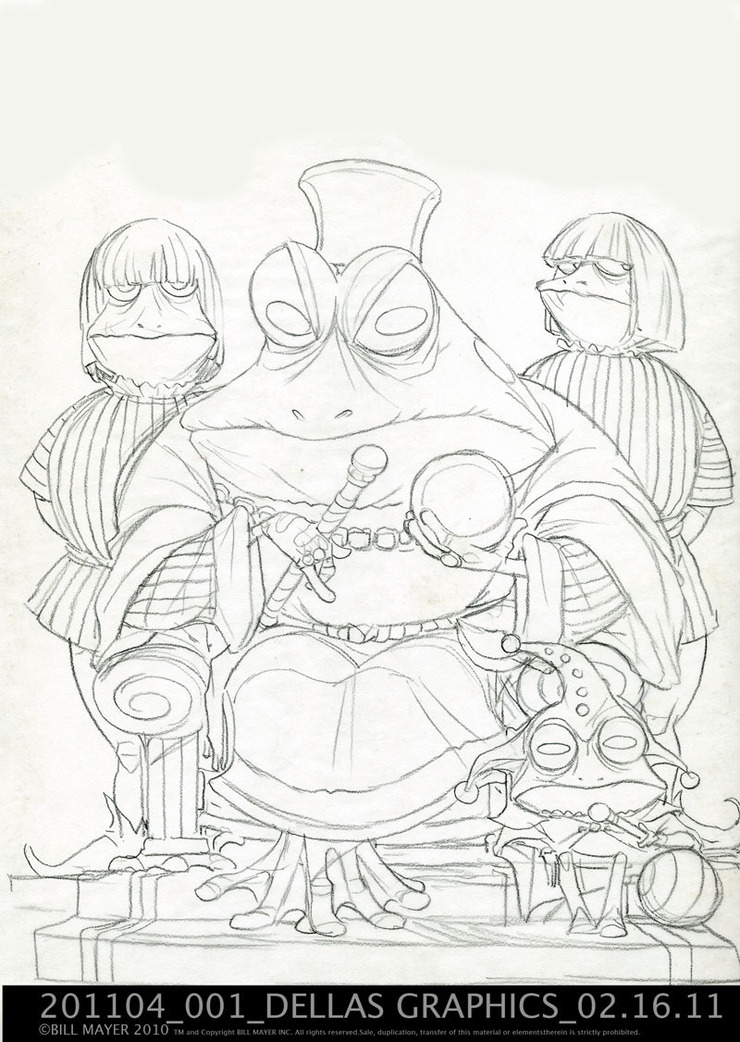 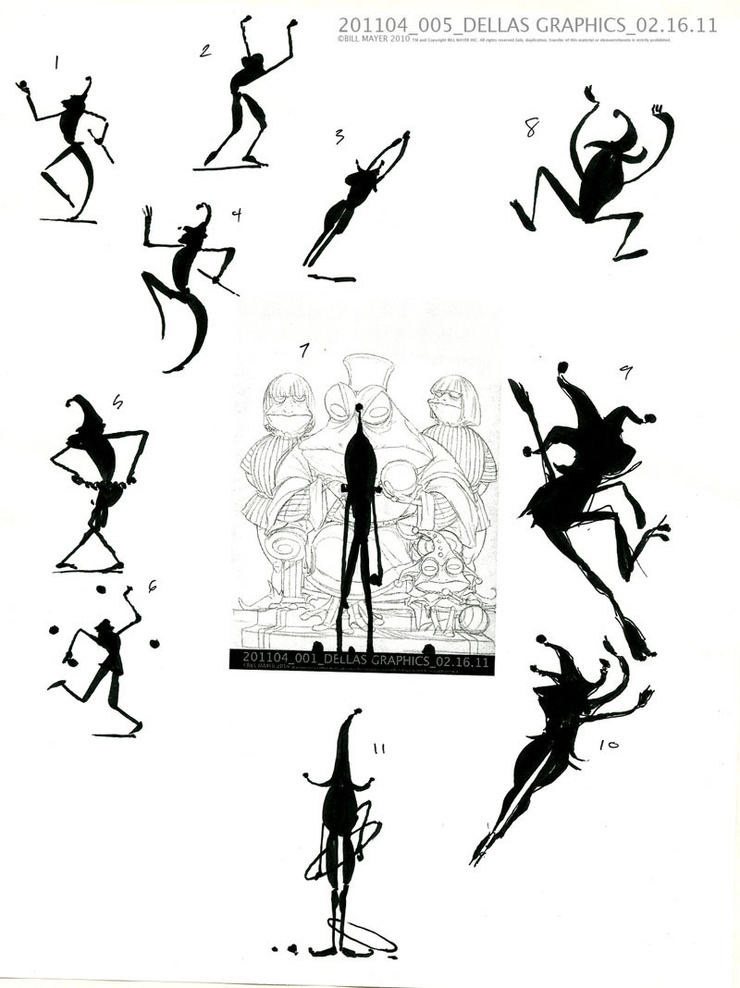 Started out with the normal thumbnail exhaustion.... Jim picked the king. I was not really falling in love with it, so another batch of ___ more thumbnails and we had one that seemed to work. Jim suggested putting a little jester in front, so I added that in the sketch. He clarified that he meant to put one in the front, standing. I tried this in a bunch of thumbnail directions... It seemed too complicated but I understod the Idea and ended up sketching them up and rendering them to try to make it work. In the final, though, it ultimately was like I expected. Just too distracting from the great charater study of the King Frog. 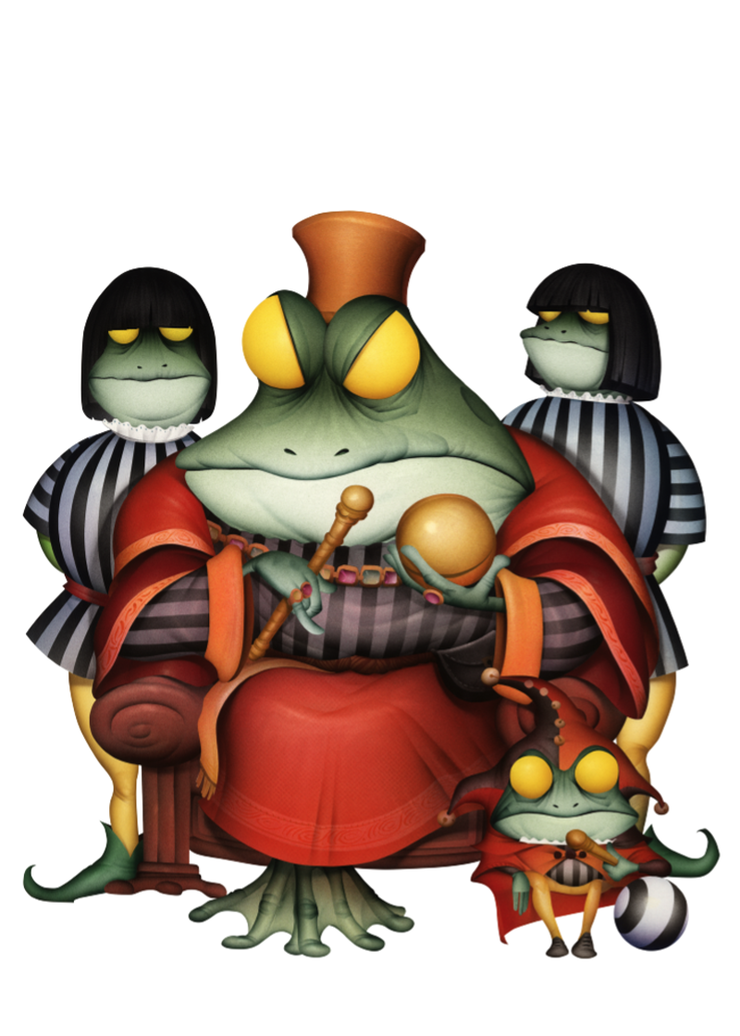 I started with the sketch transferred to a board and airbrushed the Main part. Scanned the illustration in and cut paths and retouched. 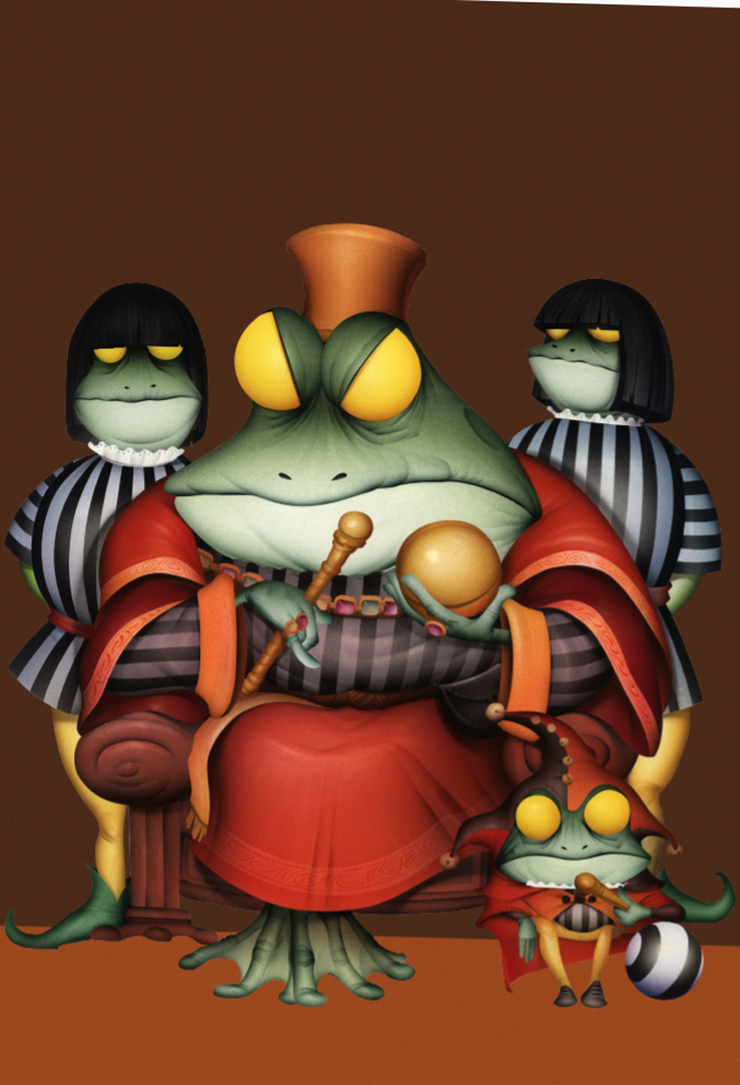 I start building the backgrounds in Photoshop.First with flat colors ,later adding shadows and detail.... 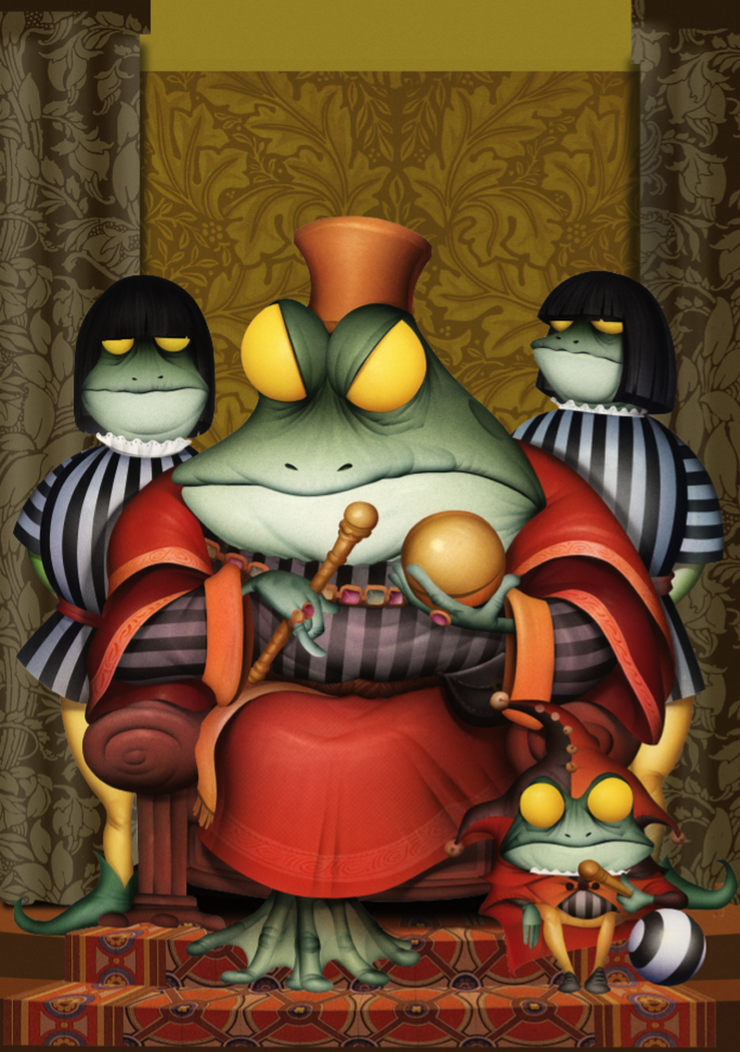 Ugh to many stripes so I pulled in some textures for the backgrounds and rug on the floor. I used transform warp to pull the textures to fit my original sketch which I pull into the file and register. Adjust the colors in Hue.... 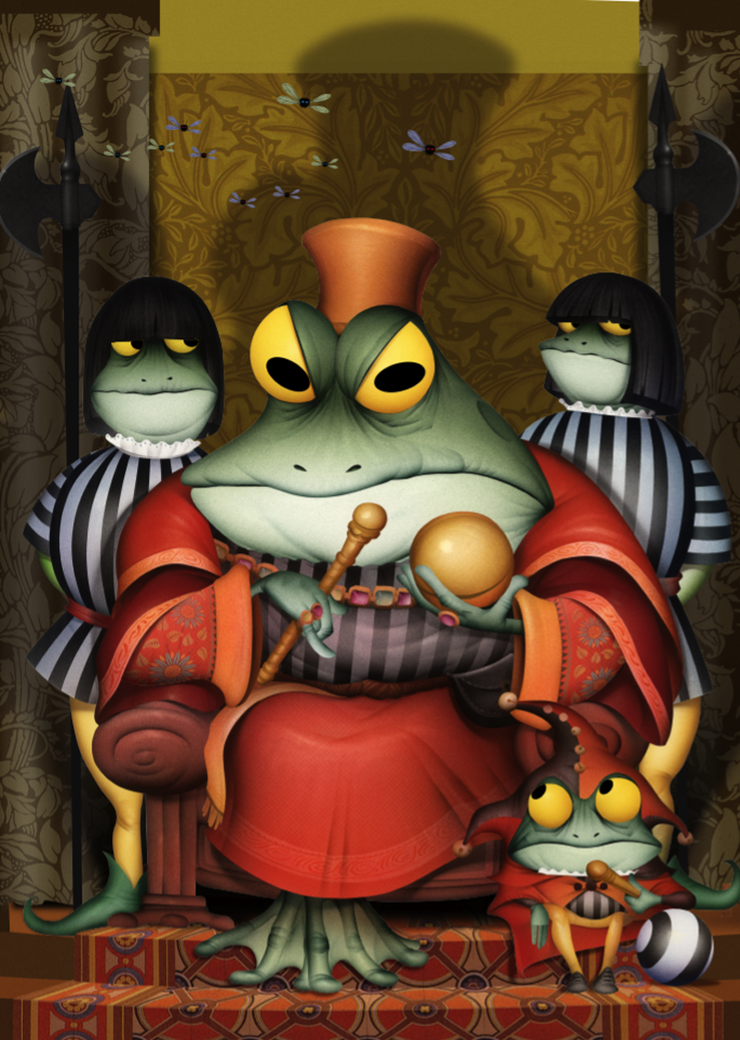 Started adding more detail and decided to add some little flies hovering around his head.....more shadows to give the drawing some depth...Added some quick battle axes, done in Phototshop. 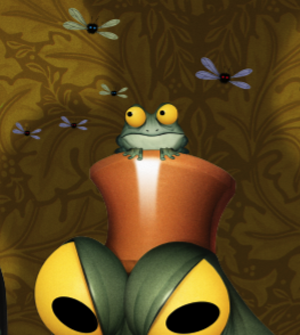 Adding this little frog was completely an after thought, so I swiped some bits and pieces and made him out of several other frogs. The body from the jester at the bottom, and the hands from the King Frogs feet. Just transformed to make them fit better....Some buggy eyes and he's good to go. 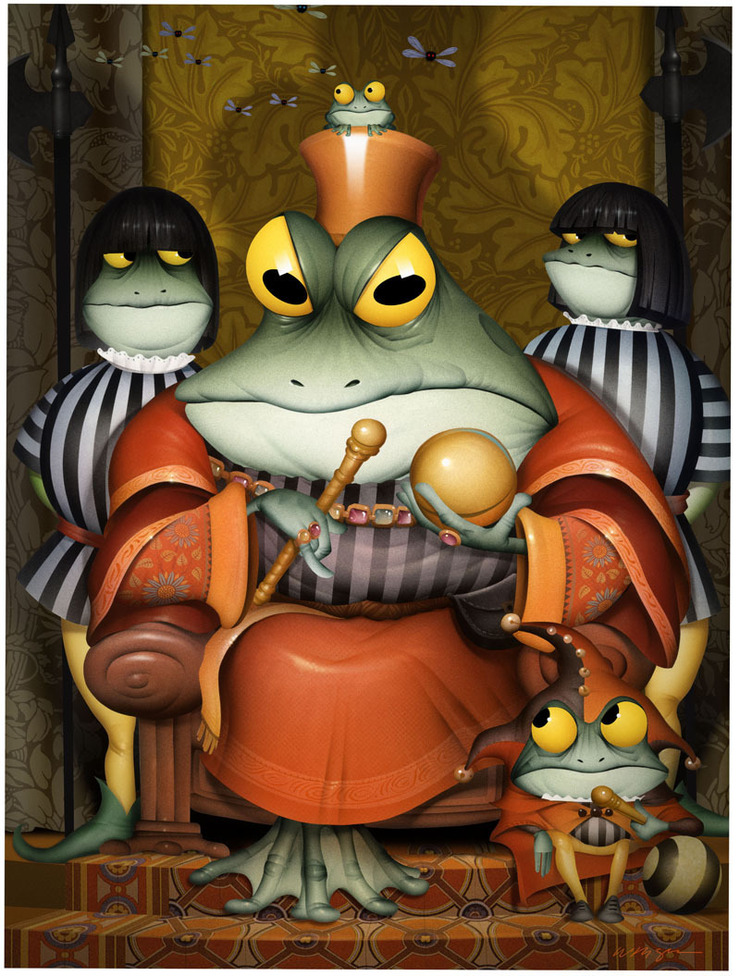 The King Frog, Dellas Graphics, ÃÂ© Bill Mayer 2011
Jim Burke really liked the idea of having the jester in the foreground, so I was determined to at least give it a try. I darkened the figure in the foreground and put several layers in between, lighting the background and creating some visual distance in between the two. Added a little reflected light also to cool down the foregound figure. Boy this was starting to get really complicated..... Maybe blurring the background image would help...Still not sure which direction to go with. So much fun, not sure when it's due either, but i'm sure we'll be doing changes until we ship it out. Hey Jim When is this thing due? 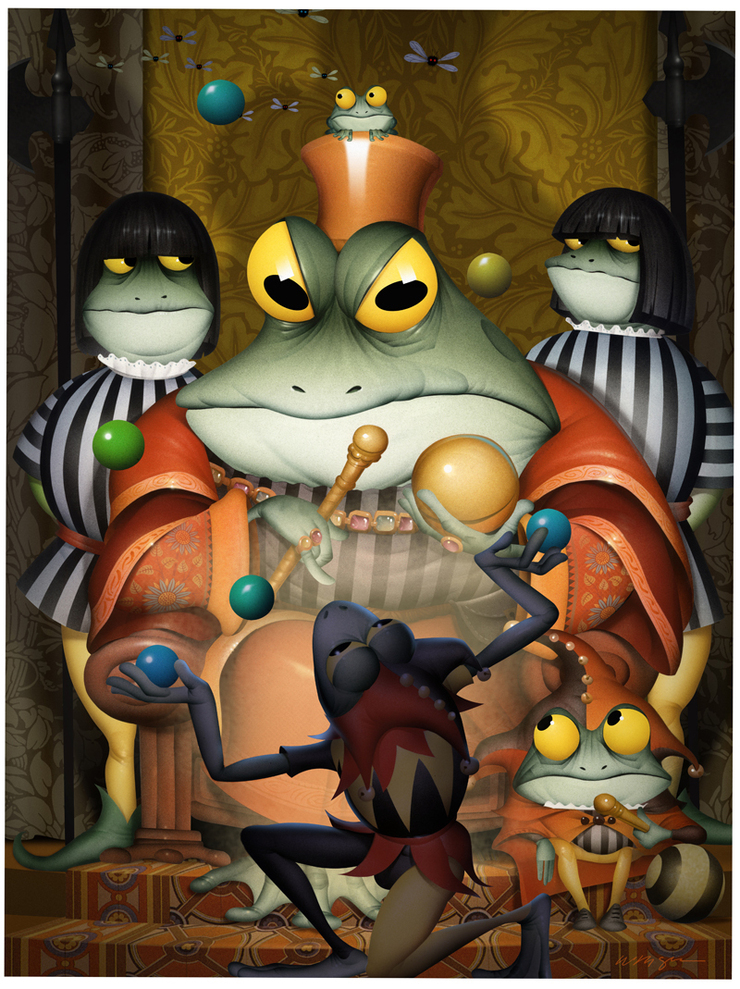