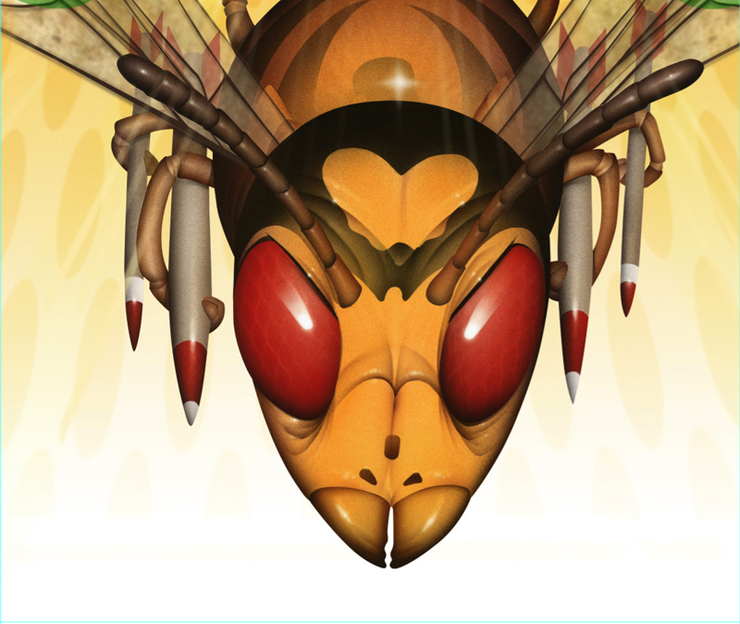 Here's little illustration for Fast Company. "For breeding a natural alternative to harmful agricultural pesticides." So thrilled to be back on their radar. Used to do a lot for Fast Company... this one was a blast. When Ted Keller called me about this article it just seemed like such a perfect match. These wasps were the good guys; Bio-warfare against destructive larva, but instead of using pesticides they spray the fields of crops with wasps. Like an invading army, they devoured the larva... What a brilliant idea. "Killer wasps! Fear not--this isn’t the movies. These predatory insects are the good guys, programmed to target only their natural enemy (which is not your scrawny behind). Bug Agentes Biológicos mass-produces wasps to combat larvae and stinkbugs that threaten sugarcane and soybean plants, two of Brazil’s largest cash crops. This past year, Bug perfected a way to spray its wasps onto soy fields, just as pesticides are spread via airplane. "We can liberate the insects in the right dose, at the right speed, and with the right protection so they can be effective," says Francisco Jardim, a Brazilian VC who has invested in Bug and sits on its board. Wasps, for example, need to be protected until their wings grow big enough for flight, or else ants present a threat. (Isn’t nature grand?)" 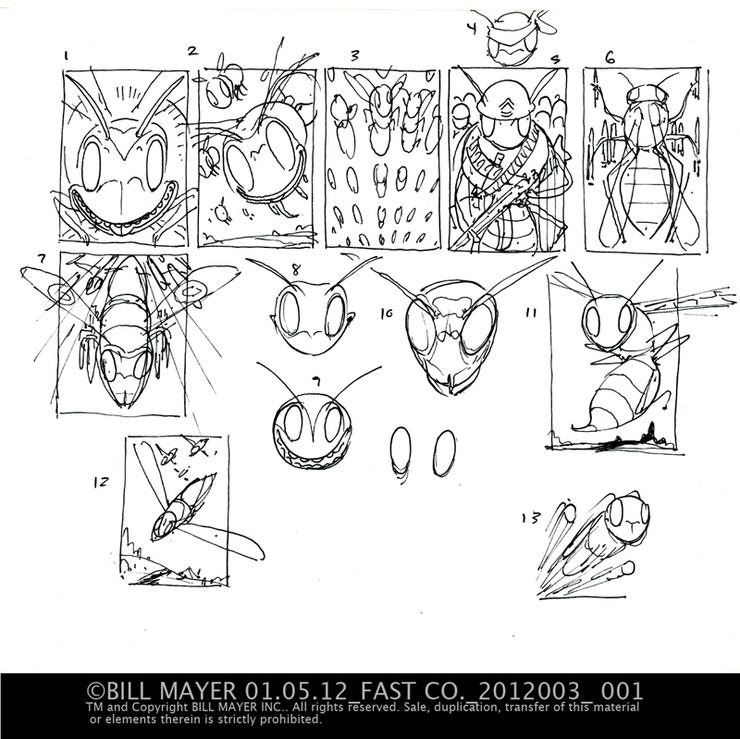 Started on thumbnails, seems to take a dozen or so to get the ideas across. I liked the huge friendly wasp face, huge and right in your face, but Ted liked the wasp airforce, maybe some brazillian color or insignias. He likes this one also because it gives the impression of a lot of wasps without doing something really crowded. We're off and running. 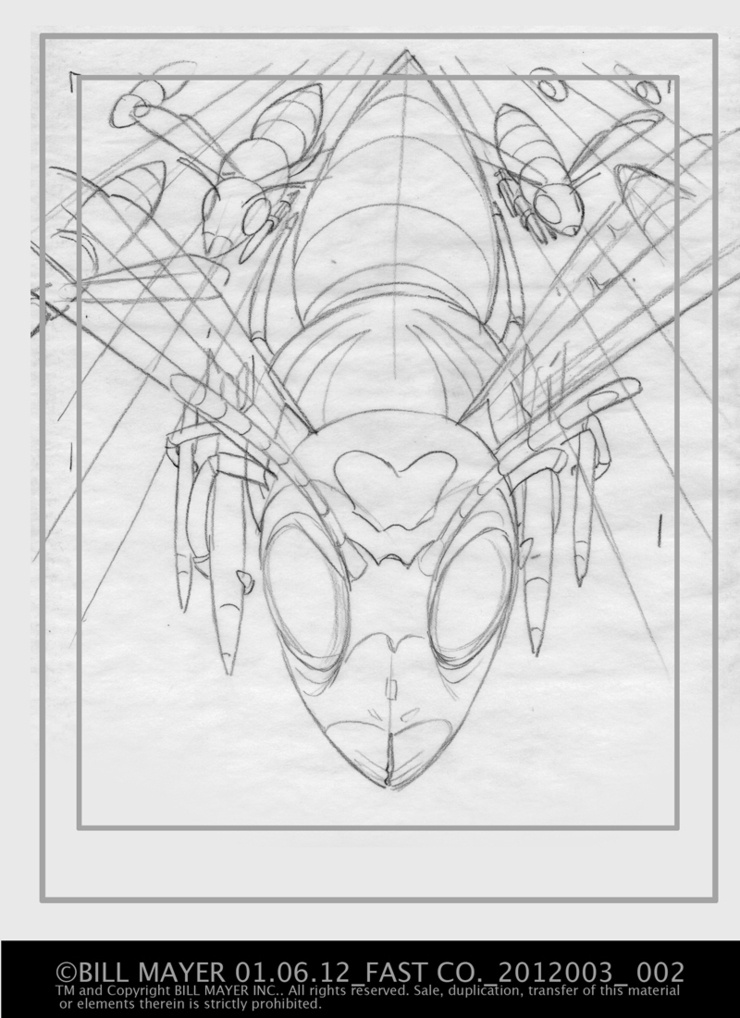 I do a sketch of the wasps, add some weapons hanging on the underside....I would do the main three wasps and photoshop the rest, distorting them and fading them off in distance to give the impression there are a lot more .The airbrush drawing goes pretty fast. I do the wings in photoshop so I can adjust the transparency and shift them in perpective as the wasps recede into the background. 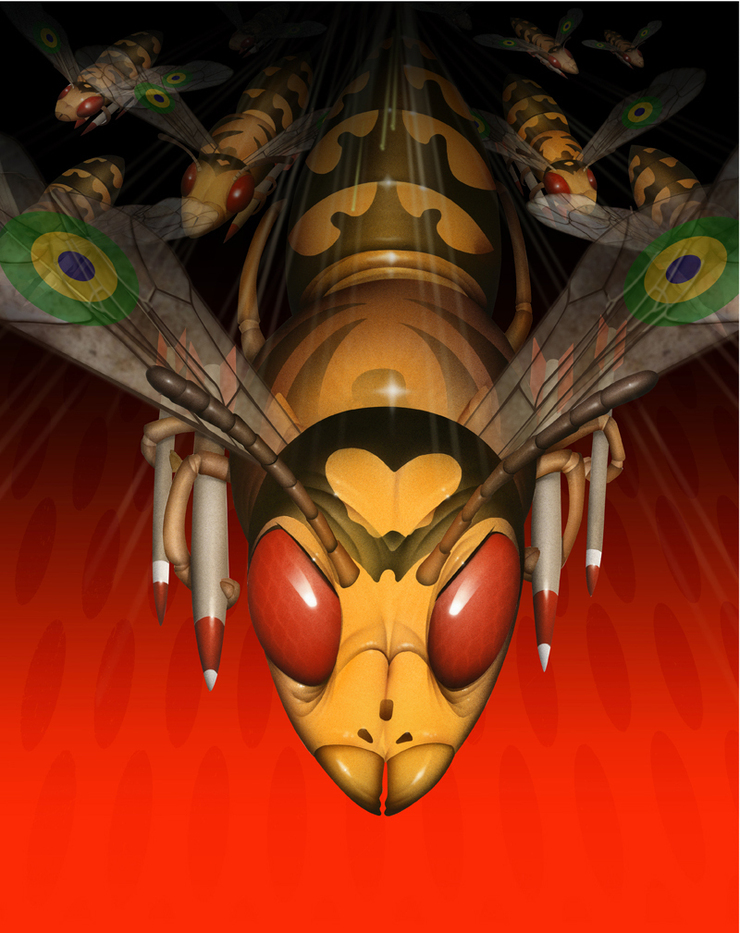 I wanted to use some sort of genome or DNA markers to add that little nod to the biological side, but just started getting way too complicated, so I scrapped this for the oval patterns interlaced with layers of light motion lines. I loved the color being somewhat all in one warm pallet, but as an afterthought, tried it with a dark-to-red background... This is interesting, but all of us like the bleed to white... 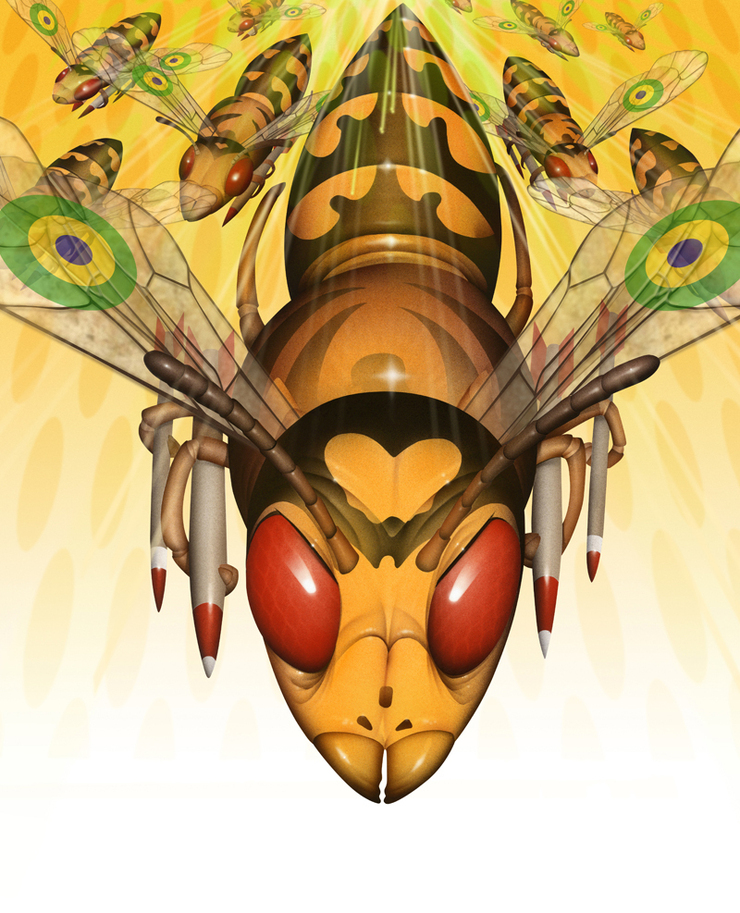 Ted's design is brilliant, Love this type....the online version is just as clean and fresh. This one was a total blast, can't wait to work with these guys again...just too much fun. 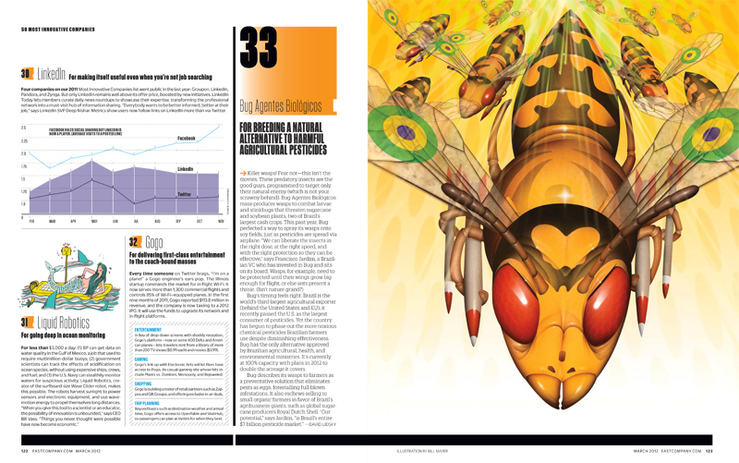