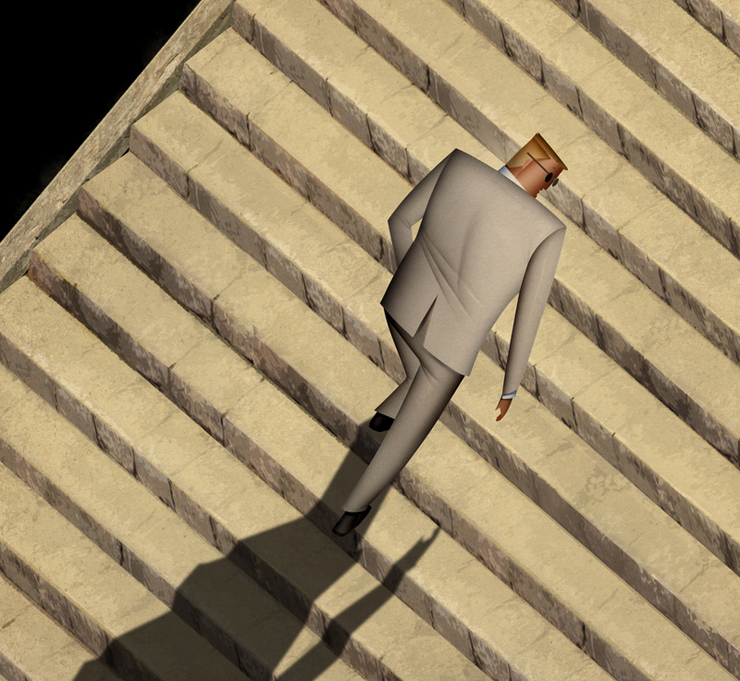 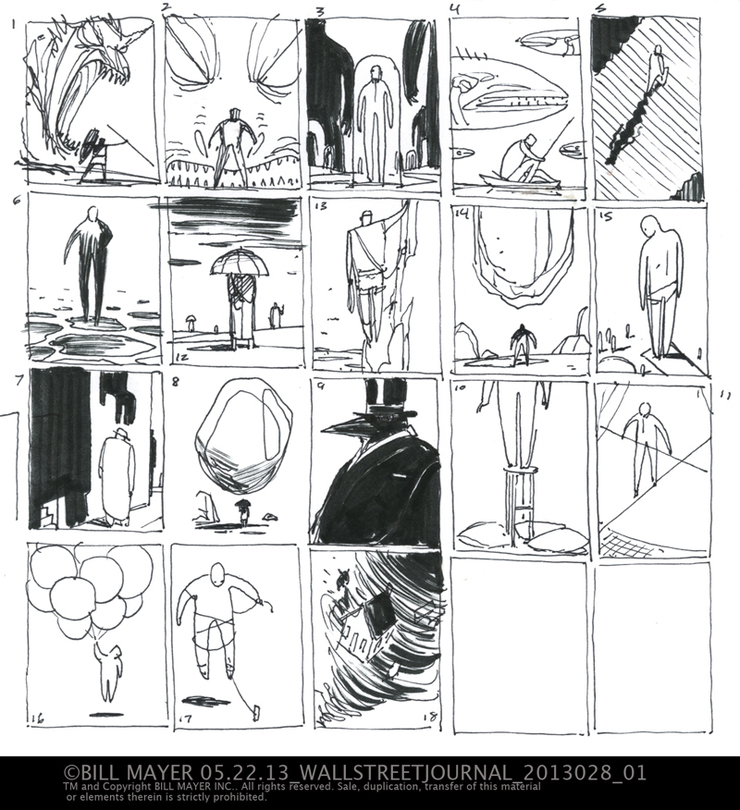 Wall Street Journal, It's been a year since my last illustration for Orlie. A fun little Illo for the business section, this one seemed to have a pretty straight forward direction from the start. It was an article about how to protect your portfolio from unforseen dangers out there in the marketplace. "Storms on the horizon"  all those metaphors just seemed to jump out.
"You can take steps to shield your portfolio from the risks that worry you the most Funds for Volatile Markets Experts recommend funds for volatile markets to The Wall Street Journal’s Michael A. Pollock. You can’t hedge against every conceivable catastrophe. But certain mutual-fund and ETF strategies might cushion the impact while keeping you in the game if the rally continues."
I jotted down a dozen or so thumbnails and fired them off to Orlie Kraus. Such a smart lady so easy to work with. I had a little music program to go to for the seven year old grandbaby, Zak, so we decided to let them digest till the morning. In the morning I got an email from her with her three choices. all of them worked in different ways. The Editors liked the "Dragon" and "The Storm." I could see both of those working with the article in different ways but my money was on the one they didn't pick, "The Stairs."

I fired off a very rough idea on how the number two Illo would work for each of those directions. " I think any one of these would be easy to come up with an idea how to end the story..." I joked with the guys in the studio that that was the one she would pick . "It's just human nature to pick the one they didn't. Okay probably had nothing to do with any of that but she picks the stairs.

These are the rough layouts she put together with my thumbnails to try to help the editors decide.
I tried to keep it very much graphic, chinese perspective. I don't want it to have to be a realistic perspective, just graphic. I stretched the figure out and a long shadow to give the stairs some deapth. I sent the sketch off with a note about the alternate figure. Orlie likes it. She's off for the weekend and we're off to the beach the next weekend so I wanted to make sure she has the art in plenty of time.

We had nice Memorial Day weekend... I worked all day, the kids came over Monday night for the normal fried chicken, Vidalia onions, Strawberry short cake, Bocce Ball, Blanket throws, Wii dance craze. But the work was plenty far enough along. Tuesday I finalize the look and start on the second spot. I build the pyramids and paint the sky, adding textures. They are looking good. I am way ahead of the deadline. We take a little break and head for the Comfy Plate. My intern Diego needs to have some pure southern heaven. I send off the low rez after lunch. 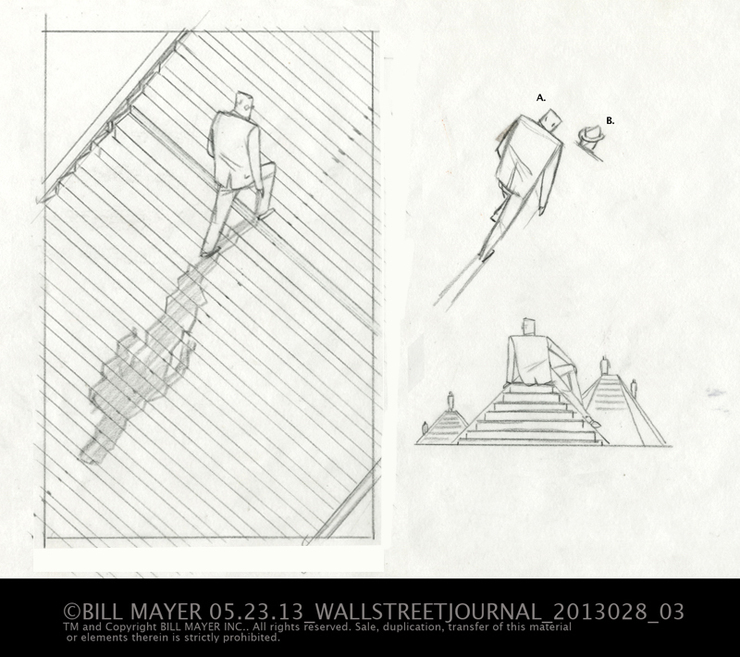 Sketch of the stairs.
The stairs I wanted to feel old and timeless like an ancient pyramid. I liked the subtle implication that it would draw to the pyramid on the dollar. But a subtle hint I am sure would escape most of the readers. 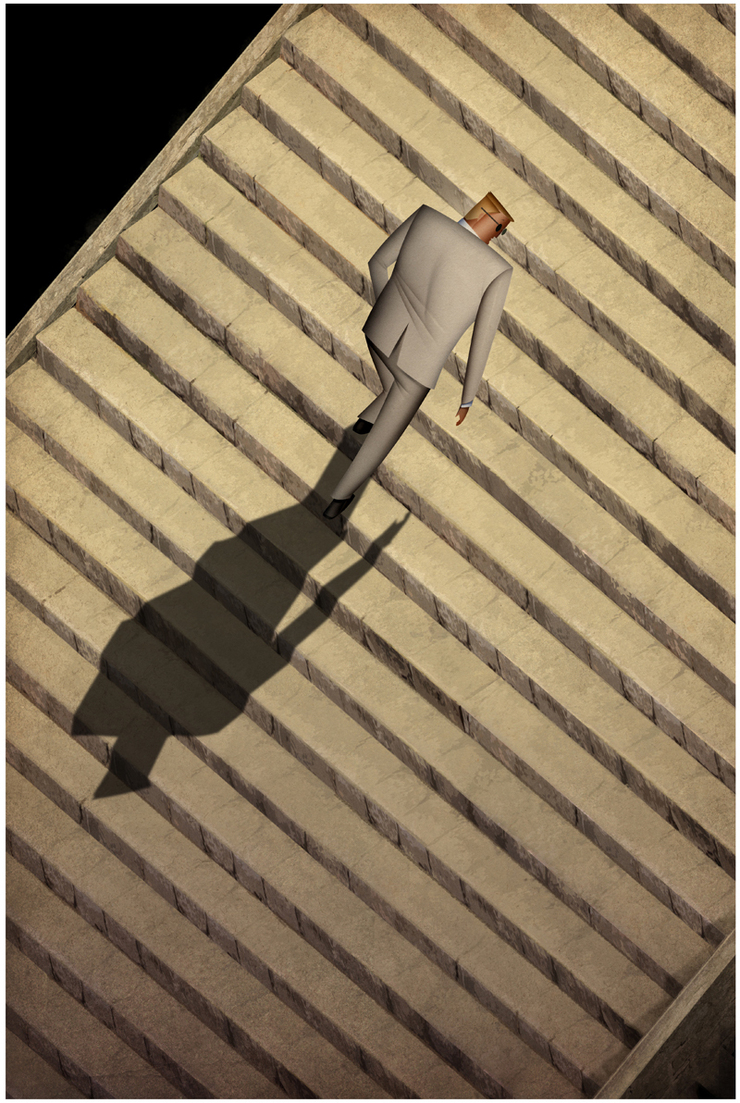 I wanted this to have a slightly ominous feeling so I kept the colors a bit dark and moody. "The Climb" ÃÂ© Bill Mayer 2013 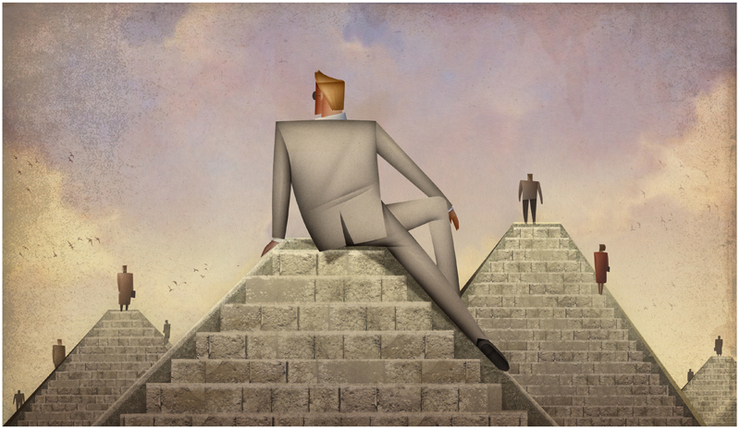 The second Illustration spot "Relaxed On Top of The World" ÃÂ© Bill Mayer 2013
a big thanks to Orlie Kraus for sending this little illustration my way. We are off to the beach. She has her art early. this makes me happy.... 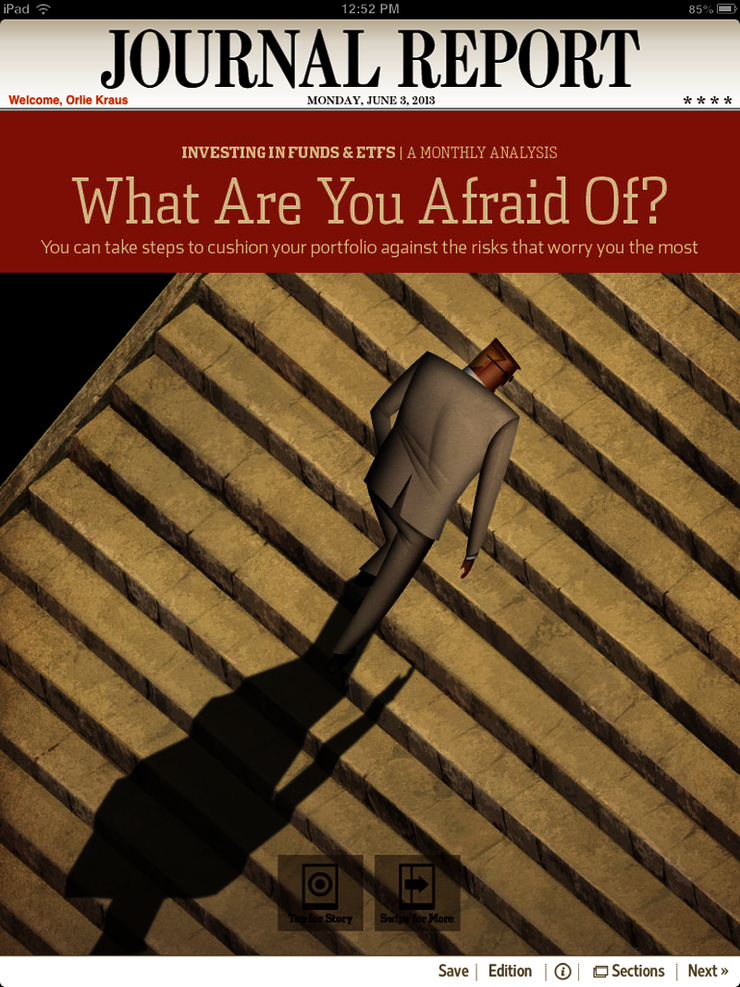 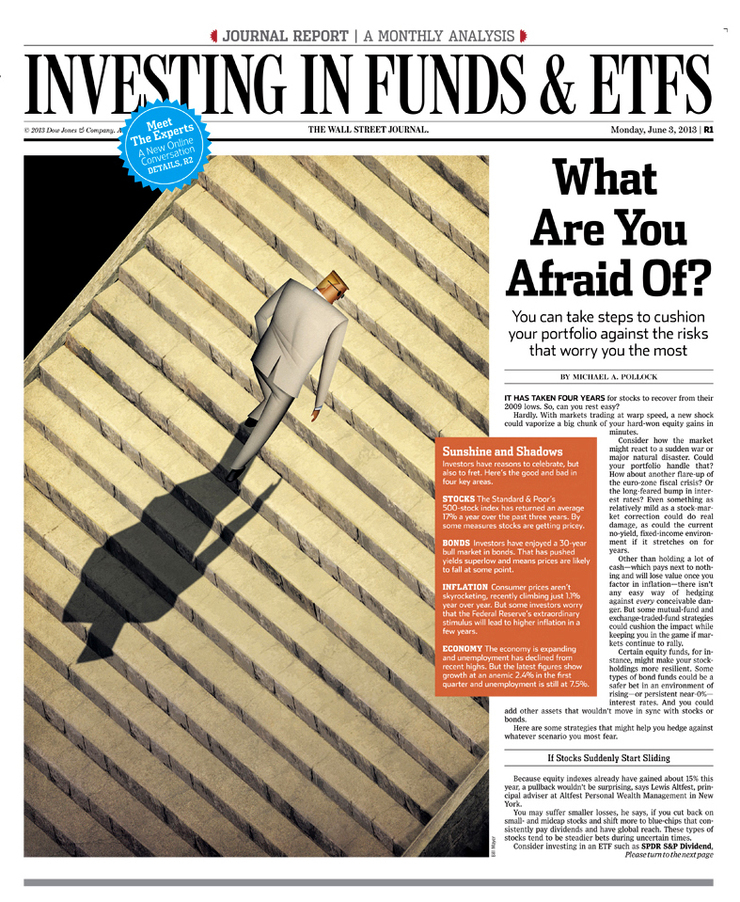