For Those About to Rock...

JANUARY 3, 2023
I've always wanted to do rock posters. I grew up on rock posters, my dad was a collector and I made sure his copy of "The Art of Rock" was well worn and dog eared. My original inspirations in illustrations were evenly divided between comic book artists and rock artists like Lee Conklin, Rick Griffin, and Stanley Mouse. So naturally, as a young wannabe illustrator my two biggest goals were to draw comics (check) and do concert posters. Up until last year, this was a pipe dream -- the biggest missing piece in my portfolio and my most elusive unfulfilled dream job.
Last year I was finally able to check that off the list. While I had spent years collecting contacts for a promo I never felt adequate enough to pull the trigger on, the industry ended up finding me first. There has always been a fair degree of crossover between the worlds of rock and alternative movie posters. One company in particular, Collectionzz, came on to the scene recently commissioning tour posters for major bands while curating their roster of artists heavily from the movie poster world. As luck would have it, I was on their radar and ended up picking up some work. 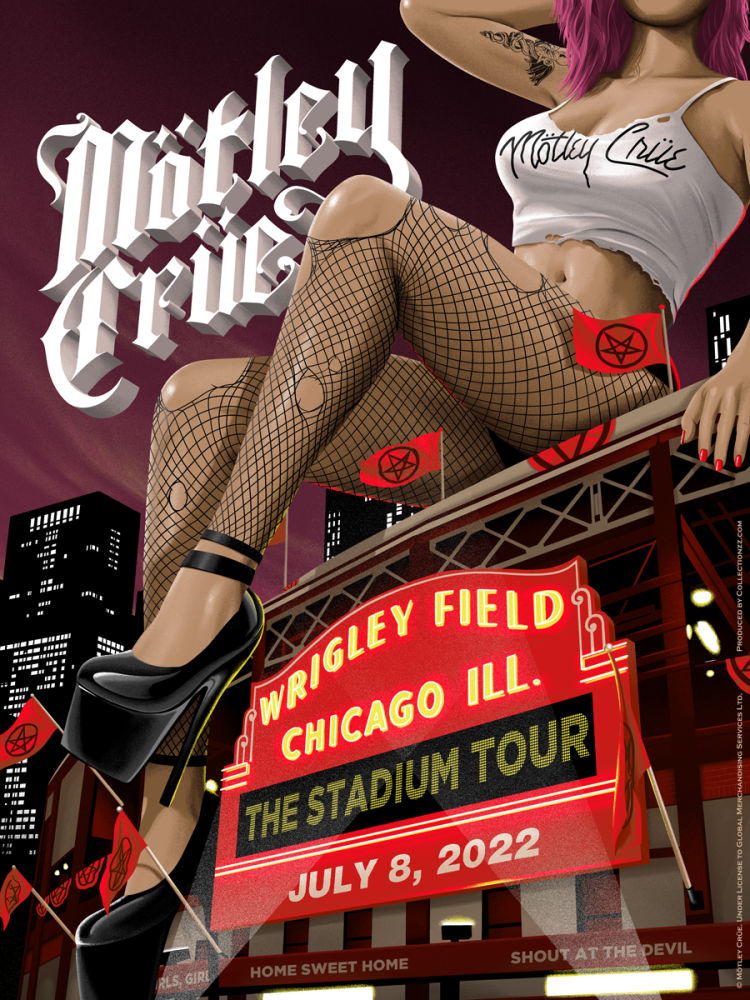 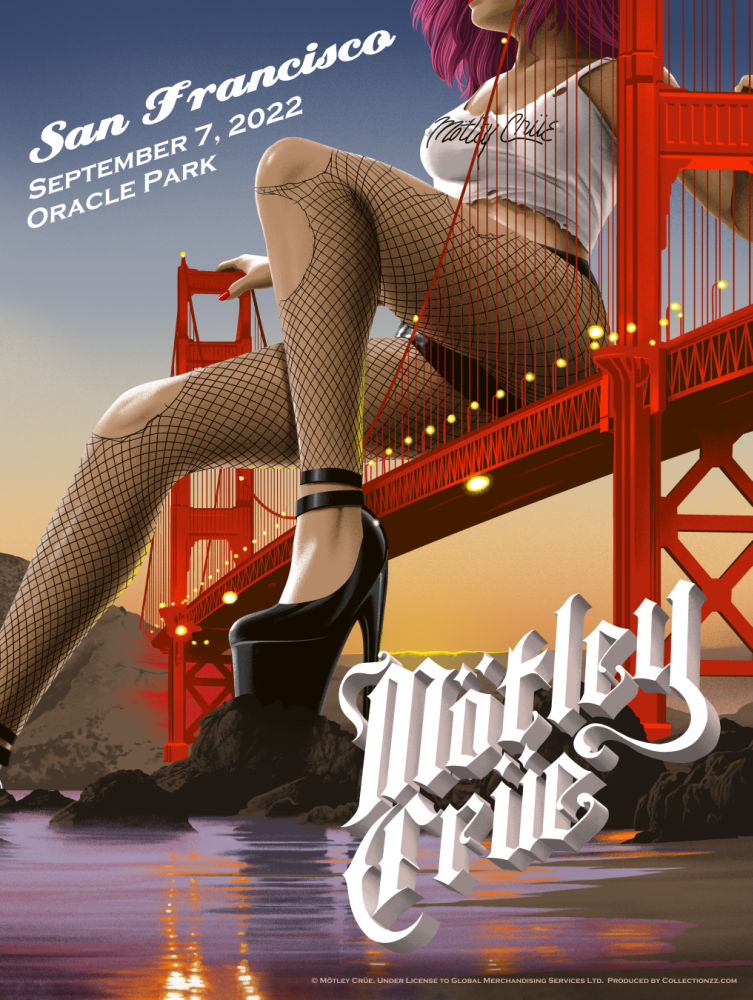 Motley Crue in Chicago was my first gig to go live (I had lots of sketches for the Stones rejected leading up to this). Although I showed a variety of approaches, they were true to their brand and went with girls girls girls. Still, I had a lot of fun with a concept inspired by Attack of the 50 Foot Woman. I used 3D modelling to figure out the woman's pose and dug deep into their catalog for inspiration. Luckily for me, they really liked the finish and asked me to follow up with a piece for their San Francisco date. As a San Francisco native, this was a really special piece for me. Again, I gave a variety of concepts and again, they went with sex appeal. I can't blame them, no one goes to Crue show for their nuanced views on third wave feminism. Fun fact, I took extensive liberties with the forced perspective on the woman and the Golden Gate bridge. The single span is over a mile long, making her wingspan absurdly wide! 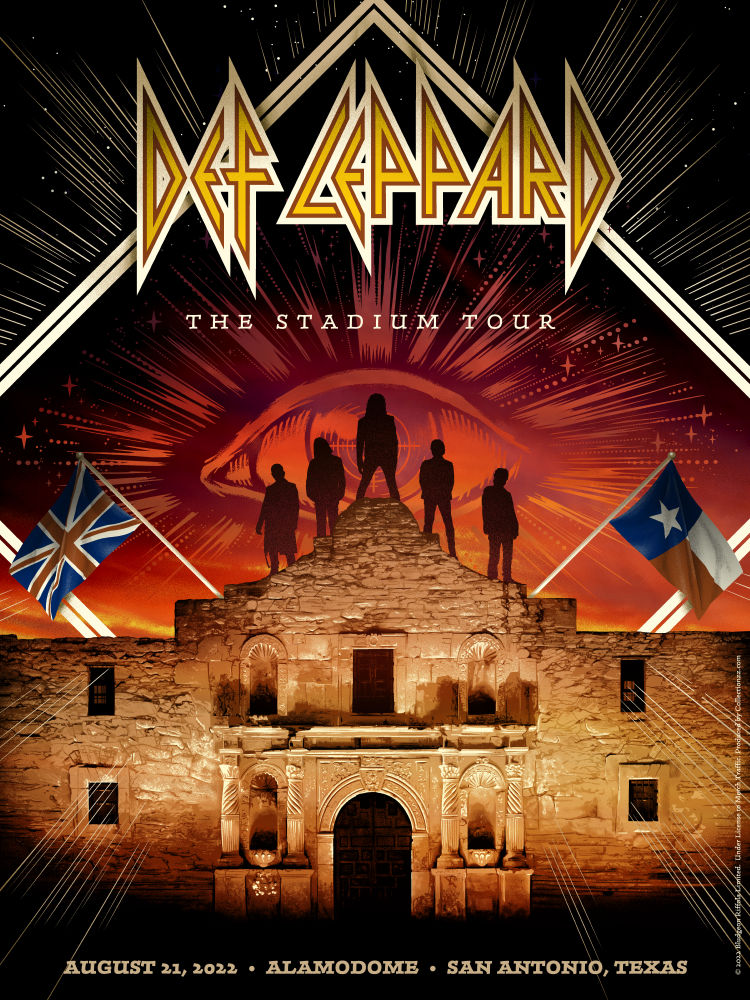 Motley Crue didn't tour alone, it was a split tour with Def Leppard. Since I had done Crue Chicago at this point, I was also asked to do the poster for Def Leppard's San Antonio date. I had to do the Alamo, there was really no other option. My first instinct was to do a leopard poised on the Alamo, but at this point they were all leoparded out. Instead I redrew the sketch with the band on the Alamo, and incorporated elements from their recent album art. I thought it would be cool to have the Union Jack and the Texas flag on the Alamo, but after this was approved I realized that not all Texans might be happy with the preeminent symbol of Britain adorning their most sacred site. Luckily, no one minded and I remain intact. 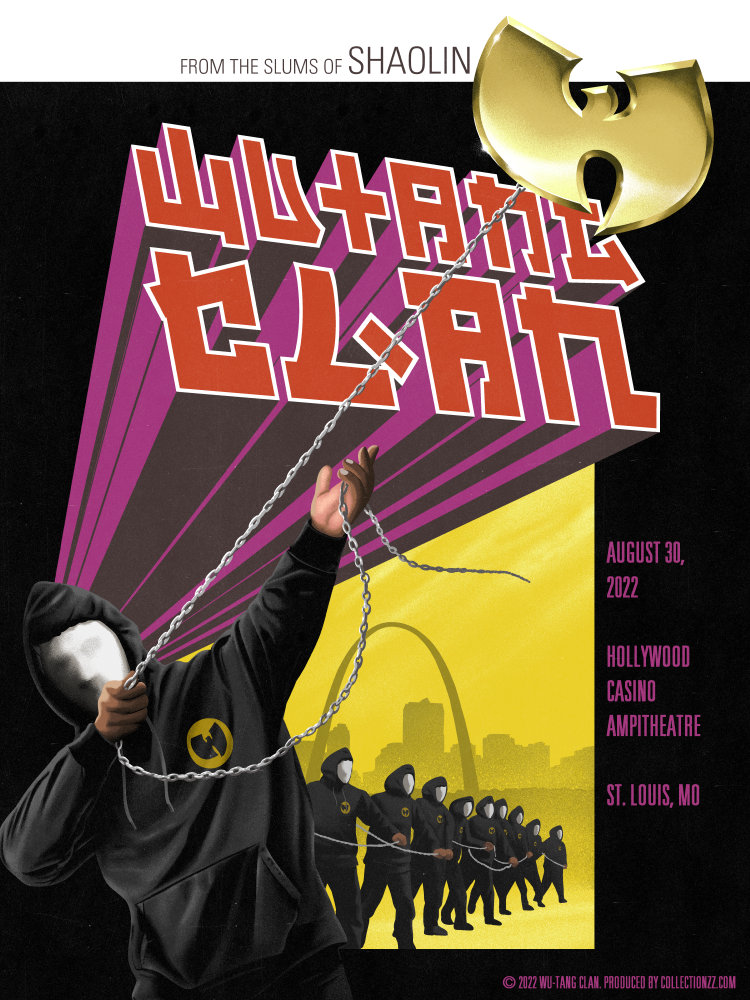 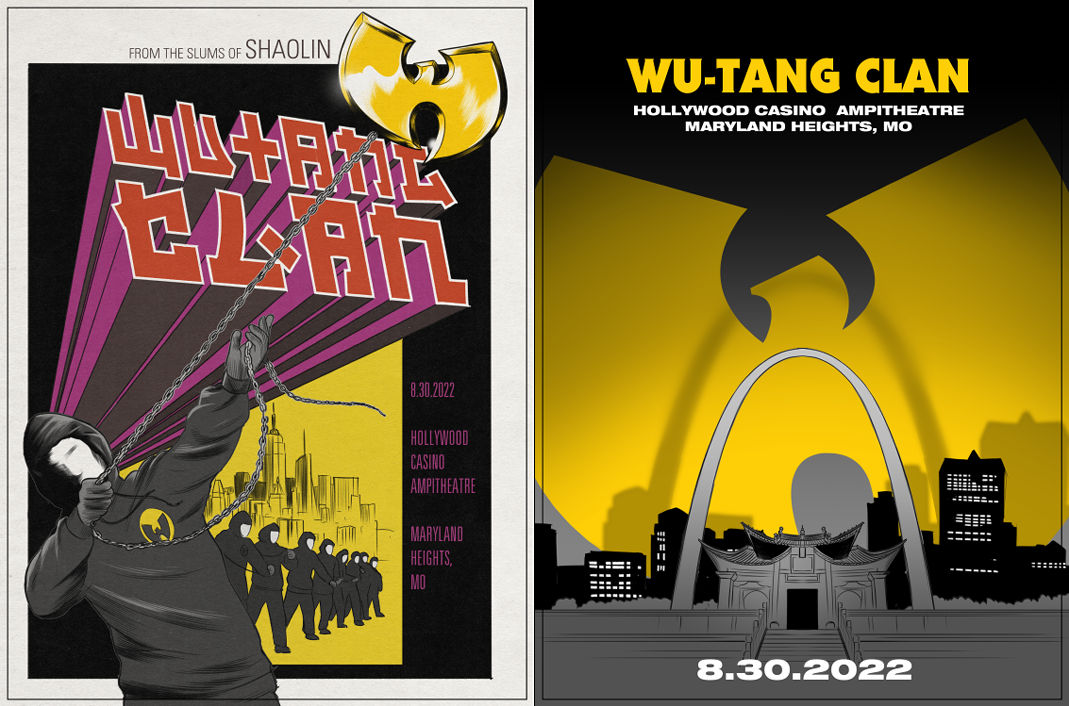 I'm not a huge 80s metal fan, but Wu-Tang Clan was one of the cornerstones of my musical education and just favorite groups in general (message me if you want my definitive ranking of albums up to 8 Diagrams). So when this job came across my plate, I knew exactly what I wanted to do. Like RZA, I'm a huge Kung Fu movie nerd, especially when it comes to the classics. I modelled my main sketch -- it was pretty obvious which one I wanted to do -- after the original theatrical one sheet for The Flying Guillotine, a reference which also comes up many times throughout Wu-Tang's discography. Luckily it was quickly approved and finished just as fast, with a little nod to St. Louis thrown in as well. Wu-Tang Forever. 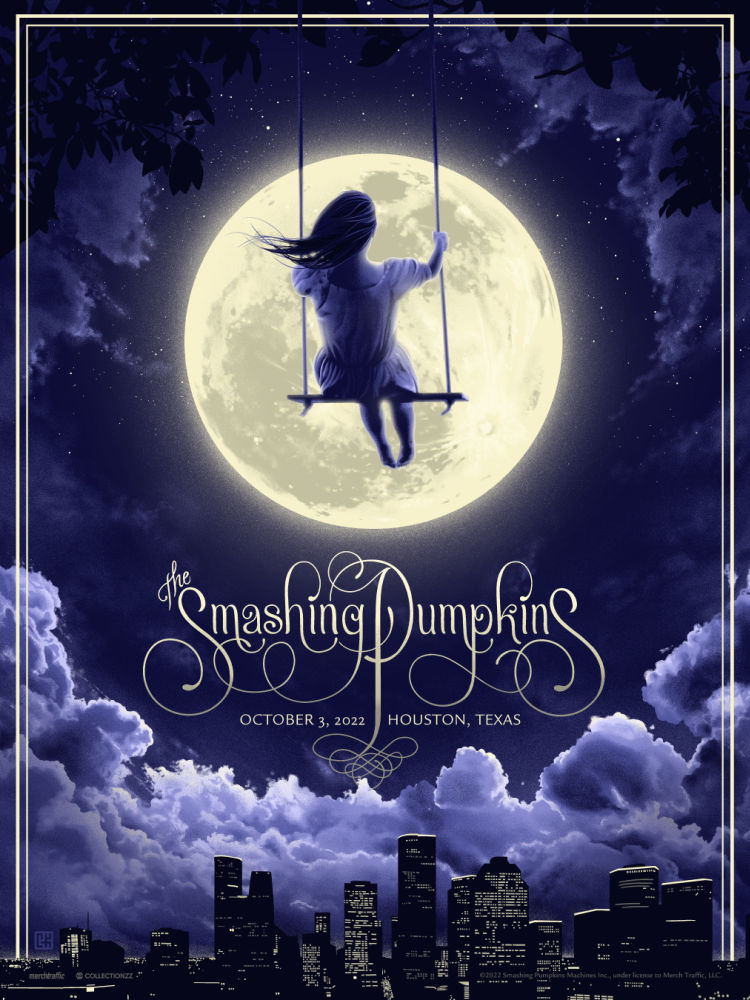 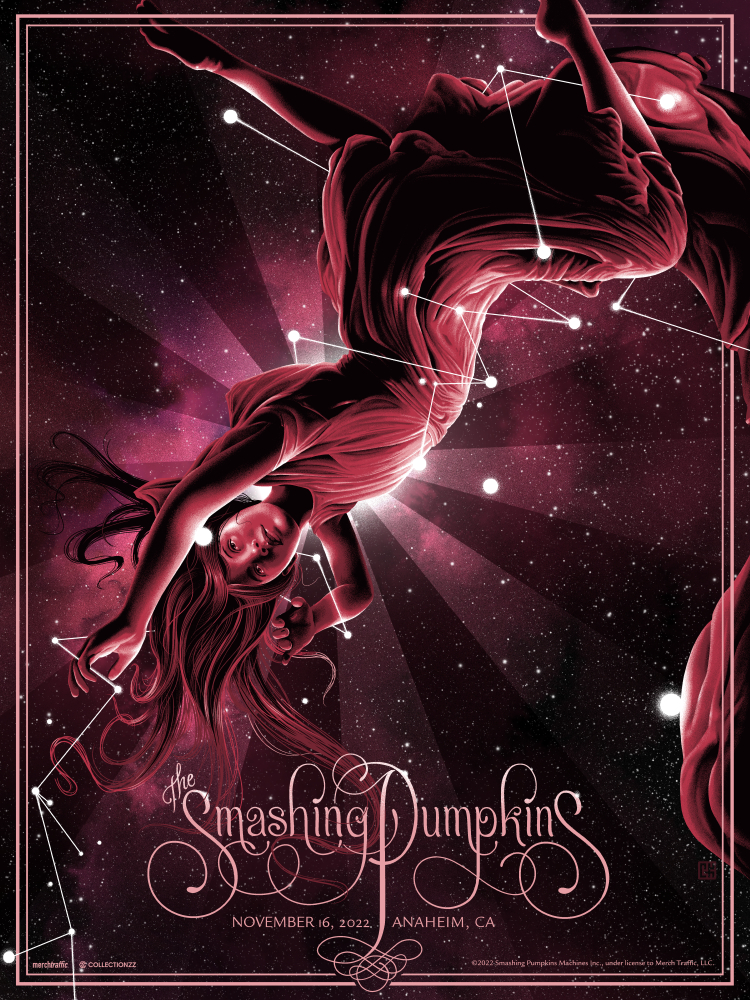 While Wu-Tang was a huge deal for me, I wasn't ready for the next one up. Smashing Pumpkins were MY band growing up. Siamese Dream and Mellon Collie and the Infinite Sadness are two of the most important albums in my life, basically the soundtracks to middle school and college for me. When I got the job to illustrate their Houston date, I used my extensive knowledge of their aesthetic and music and drew up three sketches; I really poured my heart into them. Aaaaaaaand... rejected. All of them. Because of course, they had moved on to a new aesthetic and I was still stuck in the late 90s (and I probably still am). Slightly deflated but undeterred, I drew up three more. For these I just went to my thumbnail books for ideas and tried to make sketches that made me feel like their music made me feel. This... worked. In fact, it worked better than I could have imagined. They selected the sketch of a girl swinging over a vast space. The art director at Collectionzz perfectly intuited that parents would be at the show with their kids (wow I'm old) and this would resonate with them.
A short time later, I got another message saying they also wanted to take another one of those sketches to finish for their show in Anaheim. The sketch was based on a piece I had done years earlier. I loved this idea but at the time I did the original finish I didn't have the skill or sensitivity to pull it off. For years the lost potential of it bothered me. This is one of the only times I've done the same piece twice and I'm really happy I did. I genuinely like the way the piece came out, which is rare for me.

Well that was my year in concert posters (plus many many unapproved sketches). I had more fun with these than I've had in a long time, it felt closer to my personal work than any other commercial job. I always listen to music when I work and the emotions i feel as a result alway finds their way into my work. With concert posters, that's the whole game! I'm hoping to keep this up in 2023, wish me luck!
Latest
For Those About to Rock... Monsters Among Us! - Part 2 Monsters Among Us! - Part I Movie Posters! (and a note on Drawger)
© 2023 Chris Koehler