Letter as Image/Image as Letter 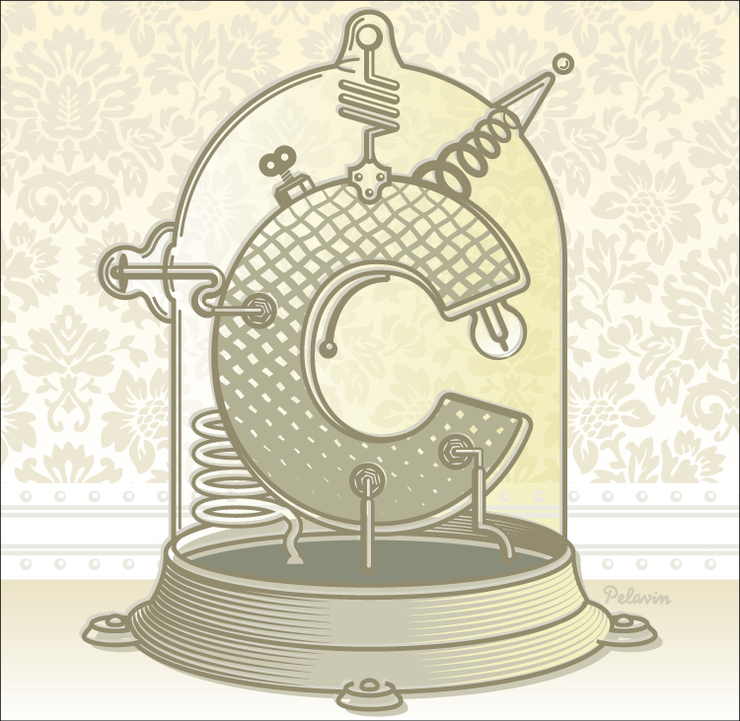 The book "C" By Tom McCarthy, reviewed by Alexander Theroux, brought to mind an illustration I had done for a book reviewed by his brother Paul a scant 31 years ago, posing a curiosity as to whether I may ever get to illustrate an article by their brother Peter.
A while back, I was surprised and honored to be part of an exhibition called Letter as Image/Image as Letter, which was held both in Los Angeles and New York and included artists who have long been heroes to me. The premise was the blurring of the line between typography and illustration and how the two are combined to enrich and deepen the experience of content and communication. I have to admit, I never really make a conscious effort to integrate the two as much as they seem to evolve naturally from the assignements I get. As case in in point is this recent ilustration for a review in the Wall Street Journal of a book with a title consisting of the single letter "C."
That title, along with the themes of invention and technology in Victorian times, presented an ideal opportunity to incorporate my love of letterforms with my delight and obsession with strange electrical and mechanical devices.
Having been given the job on a Wednesday evening withg a due date of Thursday afternoon, I was relieved of the problem of too much time for procrastination. I managed to get the art finished within about 3 minutes of the drop-dead deadline and benefitted from too little time to overthink and overwork a simple concept.

Given a short deadline, I wavered over whether to work on one very tight sketch which, would be essentially completed upon approval but, decided to do more exploration in hopes of offering more choices to the editors.
Topical: For one and all  Typography
Latest
Still here still life. The way I see it. A font is born. The journey continues A bit of Ancient History I know I'm fakin' it Once more with feeling. Tanks for the memories. Voulez vous coucher avec moi ce soir? A gift from Macy's
Topics
Topics
For one and all Typography
Archive
Image Galleries
look familiar? by the numbers smiling faces...sometimes it's all here in black & white
© 2023 Daniel Pelavin