OCTOBER 14, 2009
So you like sketches, do ya? Like many a Drawger, I have sketchbooks stuffed into every nook (a corner or recess, esp. offering seclusion or security) and cranny (a small, narrow space or opening). Face it, drawing is more than half the fun of being an artist. The other half, for me is envisioning how my drawings would translate into 3-dimensional space, thus my obsession with computer modeling.

After having a degree of success with Adobe Dimensions, I was waylayed (stopped, interrupted or troubled in some way) when it was discontinued and found little solace in the half-hearted attempt to incorporate some of its features into Illustrator. I then struggled mightily against the behmoth (something enormous, eps. big and powerful) that is Maya, only to crash and burn amongst windows, dialog boxes and commands too numerous to mention. I had slightly better luck with Blender but, in the end, decided blenders were more useful for making protein shakes than art.

Then, 3 weeks ago I stumbled upon Cheetah3D and, am back on the road to endless fiddling with splines, polygons and node-based shaders in the quest of bringing my doodles (absent-minded scribbles) to life once again. 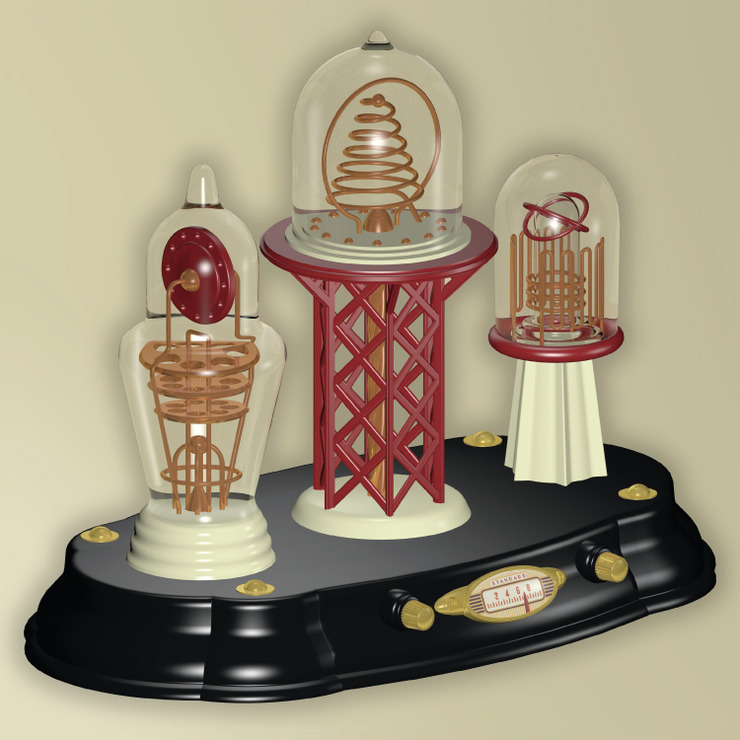 On a good night, you can receive signals from Venus that are (relatively) static-free.
To give a bit of history: a few years back, the Type Directors Club decided to celebrate the 25th year of its annual by featuring the numerals 1 through 25 as envisioned by 25 famous designers. Famous designer #14 apparently bailed at the last minute and the honor of creating that number fell to me; a perfect opportunity to test my nascent 3D chops. 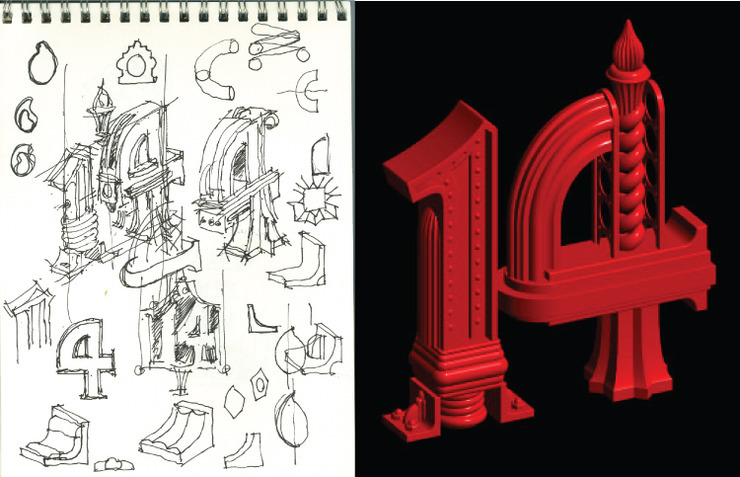 An amalgam (mixture or blend) of my affinity for both cast iron and shiny red plastic.
Then came the end of the year 2004 and the notion of doing a (365 days of promotion!) calendar.

From sketchbook to "reality" in 2005 easy steps.
A sketch I did on the beach about 5 years ago and a design I thought would make a nice clock face combined to inspire this recent creation.

Sketch, clockface and you've heard of Steampunk? Next Steamrollerpunk.
Topical: For one and all
Latest
Still here still life. The way I see it. A font is born. The journey continues A bit of Ancient History I know I'm fakin' it Once more with feeling. Tanks for the memories. Voulez vous coucher avec moi ce soir? A gift from Macy's
Topics
Topics
For one and all Typography
Archive
Image Galleries
look familiar? by the numbers smiling faces...sometimes it's all here in black & white
© 2023 Daniel Pelavin