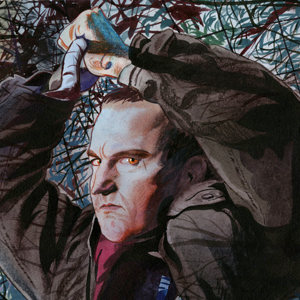 I painted a couple of Fiction assignments earlier this year for Rob Wilson at Playboy magazine.

The first assignment was a story written by the amazing Joyce Carol Oates. The name of the piece is "Loose Daddy." It is the story of a demented father who takes his unwitting son for a walk in the woods. When they arrive at the ruins of an abandoned amphitheater, the father begins to taunt the son. As his son cowers beneath him, the demented father beckons his son to the stage while reciting passages from Abraham and Isaac, and Macbeth, ”O hell-kite all!”
For my reference, I photographed Cameron McHarg (as the father) in my studio. I shot Cameron from a low angle of view while encouraging a bird like shape. Then, inspired by the idea of a hell-kite, and deciding it was something like a fiendish bird of prey, I attempted to transform his eyes and nose into severe and menacing bird like features.
As I was contemplating the background, I remembered an outdoor, arbor covered amphitheater in Brookside Park California and decided it a suitable nest for my hell-kite. Again, I used an up angle to frame the main character with creeping vines and leaves and wire.
Alas, the story never made it to print.
A few weeks later, Rob called with another amazing story entitled, "Passenger" by Jennifer Dubois.
It is the story of a woman who thinks she sees a stranger and a neighbor’s child boarding a plane that she is on. The trouble is… she's a married woman on her way to meet her lover. She can't say a thing. And by the time she does, it's too late.
This turned out to be another transformation piece for me, inspired by the following line, "In their worst nightmares, the ones that woke them up and brought them weeping into our beds, there were bears in the backyard, snakes in the living room." 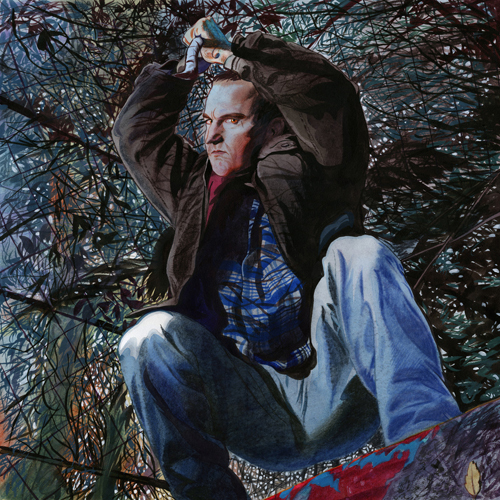 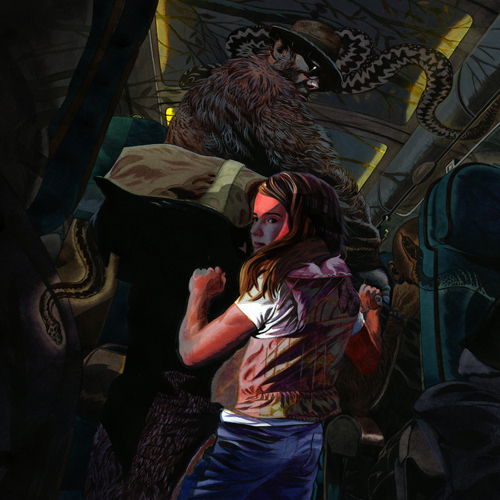