A Good Man is Hard to Find, by Flannery O'Connor 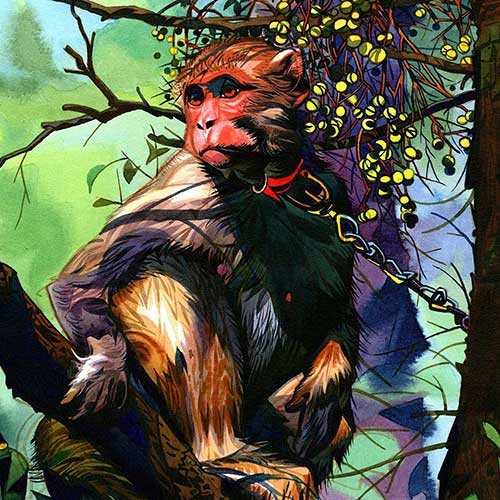 No.1 Title Piece for this series
A Good Man is Hard to Find by Flannery O'Connor. I have been a fan of this story for a very long time. So when the New York Times Book Review / A Graphic Review art director called with a "you can do anything you want and there isn't a deadline," I took the bait. Sadly, by the time I finished this portfolio, the art director had been re-assigned to another department. And that, as they say, is that.
It was a wonderful experience to attempt to illustrate this story. 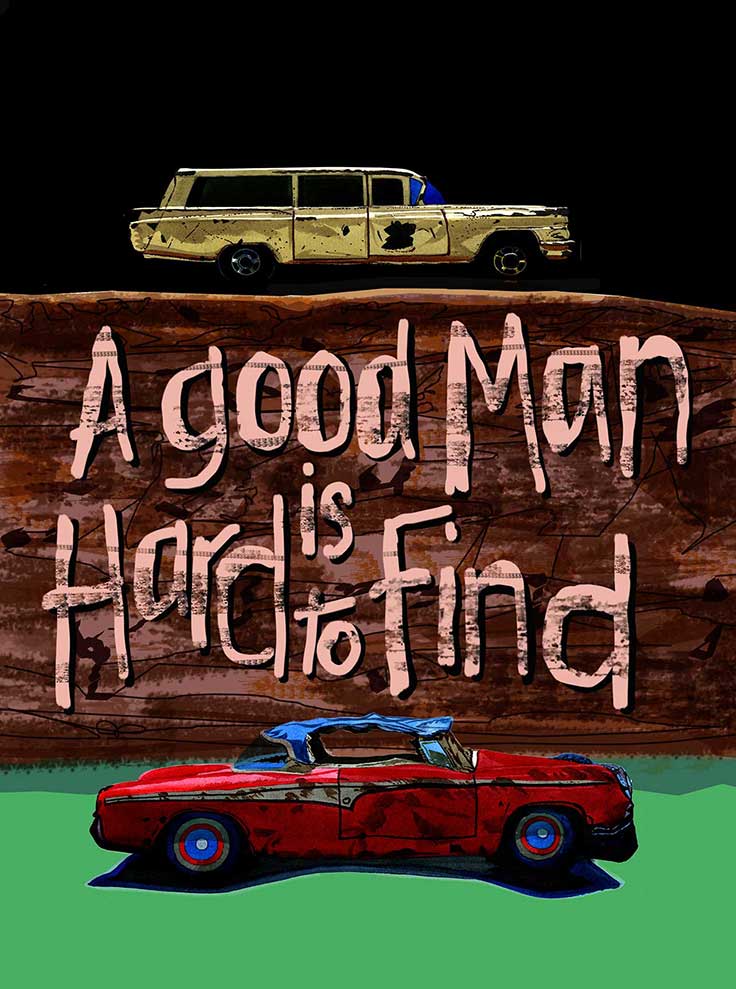 No.1 Title Piece for this series 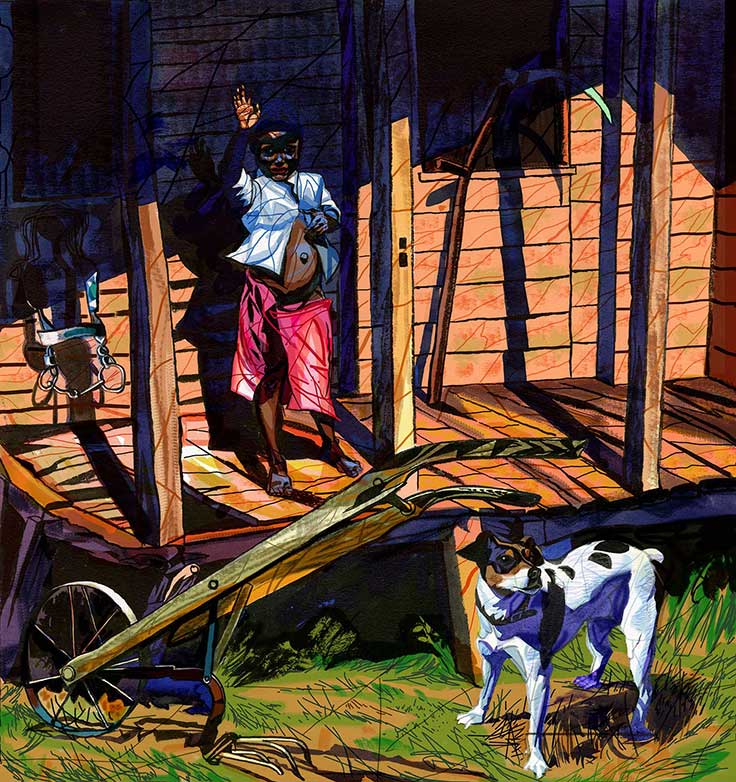 "Oh look at the cute little pickaninny!" she said and pointed to a Negro child standing in the door of a shack. 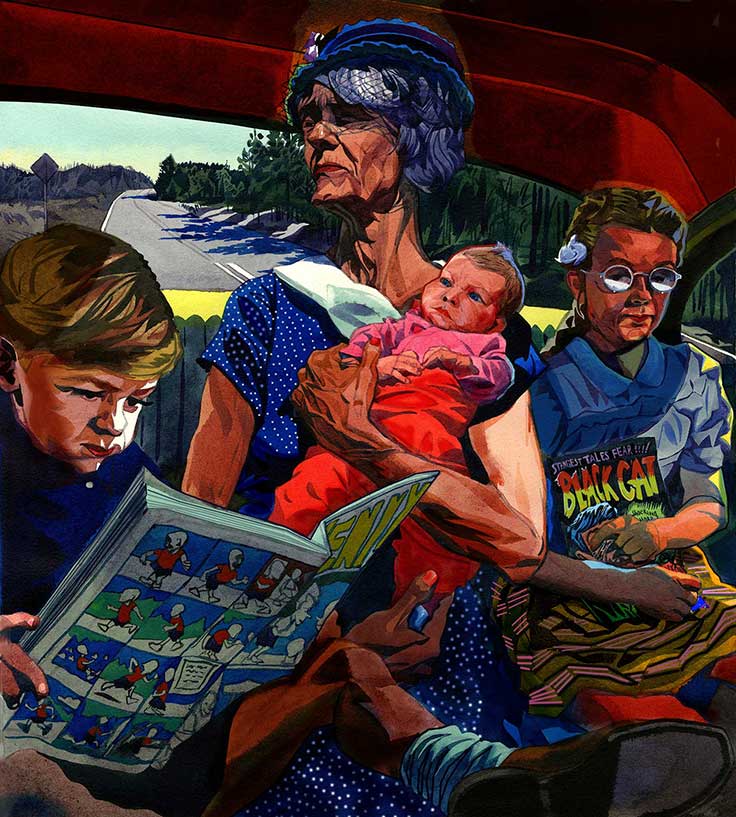 The grandmother offered to hold the baby and the children's mother passed him over the front seat to her....When the children finished all the comic books they had brought, they opened the lunch and ate it. 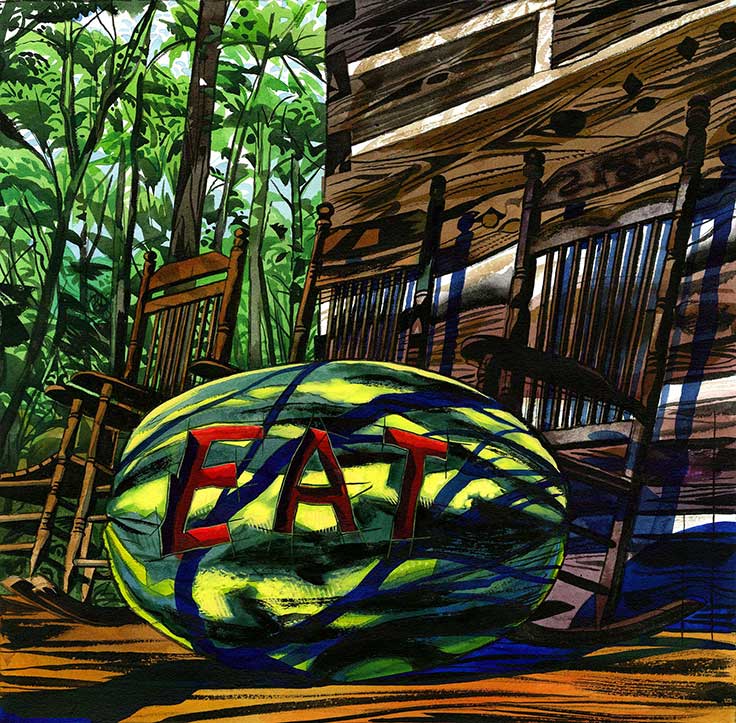 She said he was a very good-looking man and a gentleman and that he brought her a watermelon every Saturday afternoon with his initials cut in it, E. A. T. 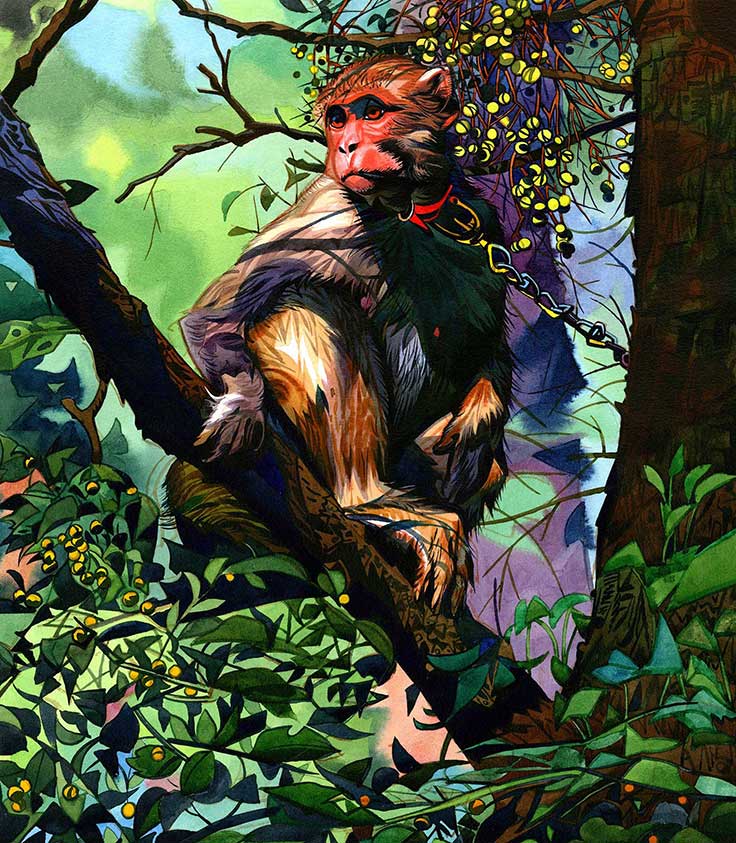 The children ran outside into the white sunlight and looked at the monkey in the lacy chinaberry tree. He was busy catching fleas on himself and biting each one carefully between his teeth as if it were a delicacy. 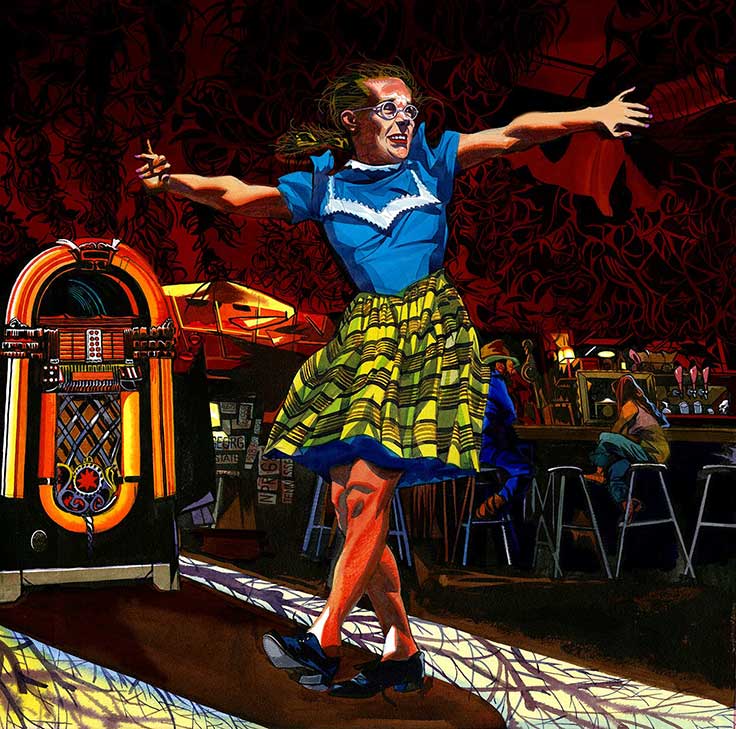 June Star said play something she could tap to so the children's mother put in another dime and played a fast number and June Star stepped out onto the dance floor and did her tap routine. 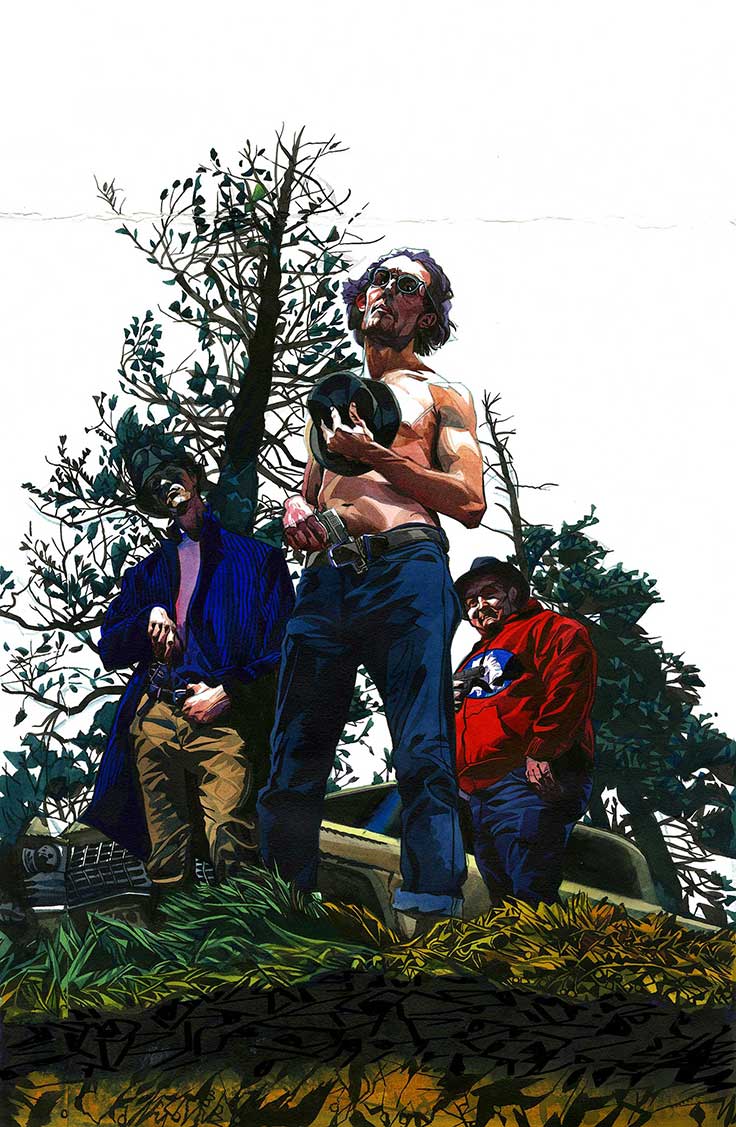 It came to a stop just over them and for some minutes, the driver looked down with a steady expressionless gaze to where they were sitting, and didn't speak. Then he turned his head and muttered something to the other two and they got out. 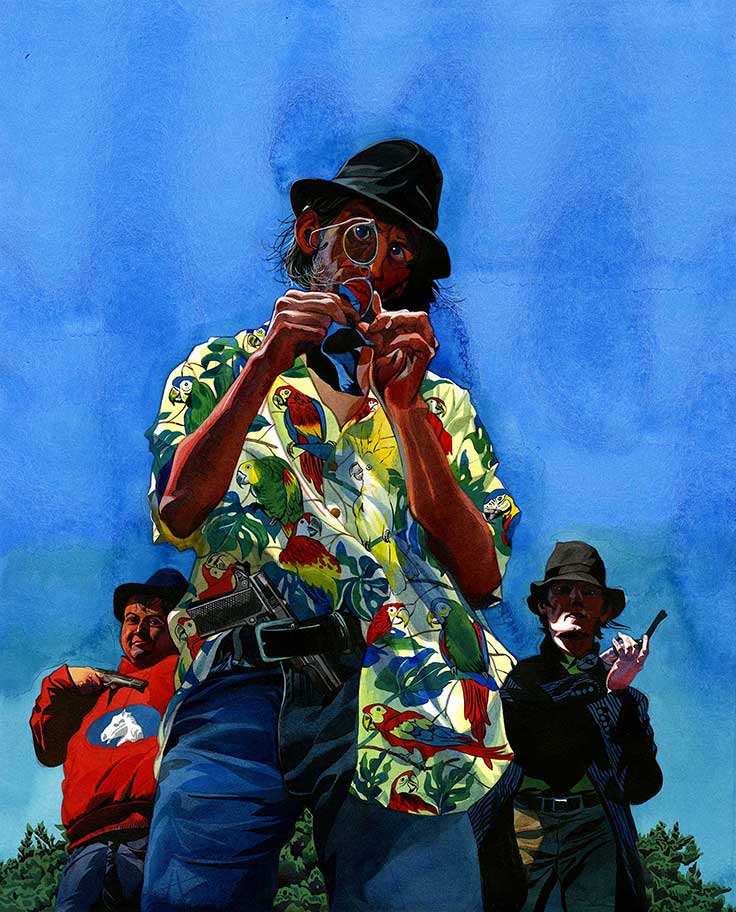 The Misfit sprang back as if a snake had bitten him and shot her three times through the chest. Then he put his gun down on the ground and took off his glasses and began to clean them. 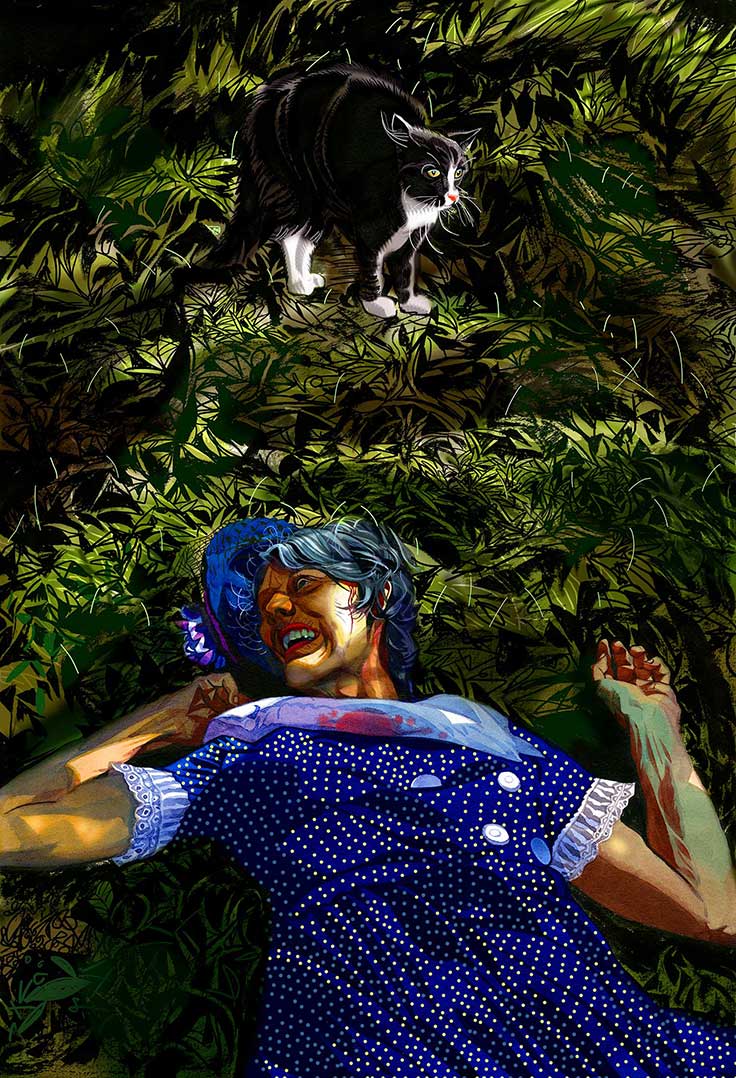 Hiram and Bobby Lee returned from the woods and stood over the ditch, looking down at the grandmother who half sat and half lay in a puddle of blood with her legs crossed under her like a child's and her face smiling up at the cloudless sky.
Latest
Tony Bennett Memorial Portrait of Boston Celtics Legend Bill Russell The Creature 2, A Study The Creature, A Study Vampires, Their Undying Appeal for Life Magazine Cover Putin Kill Psycho The Cabbie and The Boss, 1972 In Cold Blood, Patricia Highsmith's Diaries John Erickson for World Magazine
Topics
Topics
Confrontation Fiction Noir Portraits Process Re-creation Shadow Knights Sketchbook Songs Sports
Archive
Image Gallery
El Paso
© 2022 Jeffrey Smith