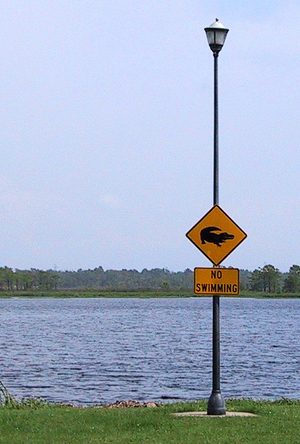 A few years ago I promised myself that if that season's hurricane didn't destroy New Orleans, I'd finally make the trip to Jazzfest. It didn't, but neither did I. Realizing now that I'm at least partially responsible for Katrina - this doesn't relieve George and Brownie one bit, BTW - I decided to make amends and take the plunge (my apologies for the bad pun/symbolism/metaphor/whatever). A few friends and I jammed into a new Prius for the roadtrip out, with the goal of seeing how little gas it would take to get there and how gassed we could get once we arrived. We did the latter well enough that I can't recall the answer to the former, but I did manage to take some pictures to remind myself of what we saw, so I thought I'd put 'em up here. I've now offically reached that point in life where you bore your friends with your vacation pictures.......
One of the first things you need to do when you cross into Louisiana is begin looking for a place - almost any place - to eat. It's the national pastime there, and with damn good reason. We missed a few opportunities to hit the roadside shops for Cracklin's (fried pork fat - trust me, it's better than it sounds), but we quickly found ourselves at the doorstep of Crawfish Town. What it lacks in ambiance it more than makes up for in cholesterol. 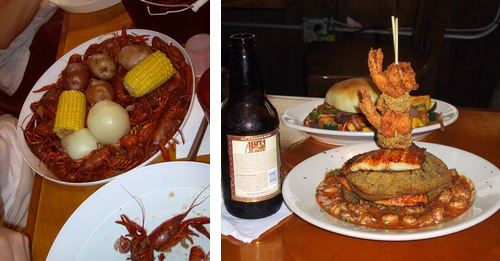 Fish isn't typically associated with heart disease, but then not much is typical in Cajun Country. In addition to the platter of ditchbugs here, there was a dish of deep fat fried fish, crab, shrimp and a few other unidentified things pulled out of the swamp that were delicious when stacked together like a edible Tower of Pisa. Washed down with a few Abitas, this hit every spot available, all at once. 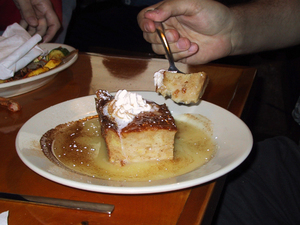 Of course, there's always one more spot that needs hitting, and nothing doe the job better than Bread Pudding - the official dessert of Louisiana. It's the best thing since sliced bread was allowed to go stale and get soaked in milk, butter, cinnamon, raisins, and bourbon.

After this we were wheeled out to our car by the friendly staff and pointed in the direction of New Orleans. A few hours later, we were rolling into town. 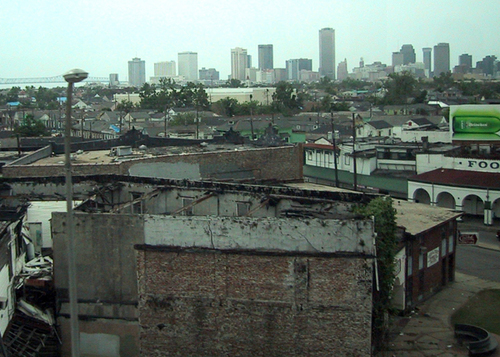 I fully expected to see some significant damage when I got there, but I was really struck by both how widespread the destruction was and how quickly the tourist sections of New Orleans were (seemingly) brought back to their pre-Katrina state. There were lots of the old spots missing (Felix's, for one), but passing through the Quarter and the Garden District, you'd have been hard-pressed to think much more than a hard thunderstorm had recently hit. It was really easy to see how, depending on the direction you pointed the camera, you could frame the picture of this city any way you wanted. 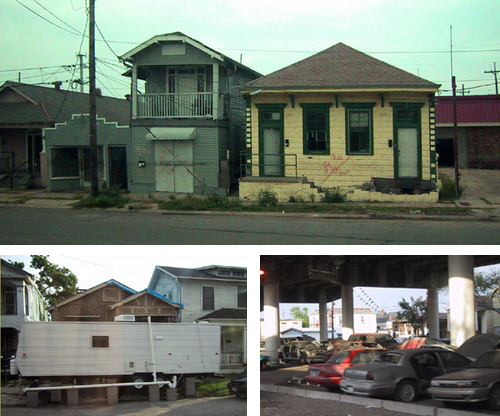 With six guys off on the long (lost) weekend, we stuck close to the Jazzfest and Quarter for the trip, so we didn't begin to see the worst of what Katrina did to this beautiful city (we were told again and again that the 9th Ward and others areas would leave you wondering if you were in a Third World nation). Still, just the ride to and from the festival grounds gave plenty of evidence of a job left undone, including these pictures of blue-tarped roofs, temporary trailer homes, and seas of flooded and abandoned cars under every elevated stretch of freeway. You can still make out the high-water lines and spray-painted codes on the exteriors of virtually every house front indicating how many animals and/or humans were found in a given structure. So this is what a post-Apocalyptic America will look like....... 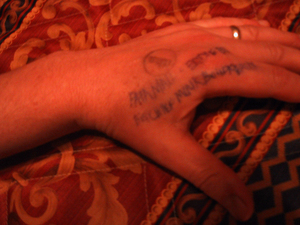 Our first night out, we made it to a great bar called DBA where Papa Mali, Eddie Bo and Big Chief Monk Boudreax were tearing it up. We did likewise, and rolled in around 5am, stopping on the way back to the hotel to get beignets at Cafe Du Monde (I know, I know, but it was good). The bartendress was kind enough to write the band's name on my hand before we left the club, but the evening was far too fun to be that easily forgotten. 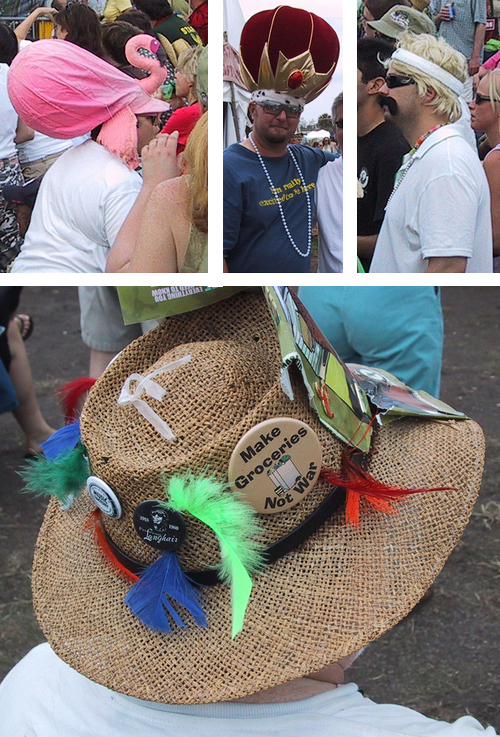 Hats and odd outfits are a must for any festival. Folks here know how to make statement.......

......and some even had the hutzpah to tie their's on the back of an airplane. This guy circled the fest for an hour, letting sponsor Shell know what they thought of their civic outreach (in case you can't read it, it says "Shell - great music - don't kill our fish!"). 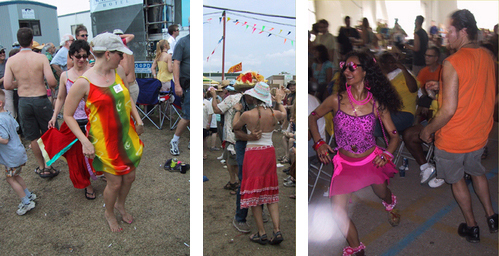 Lots of folks dancing, having fun, and generally being extroverted. 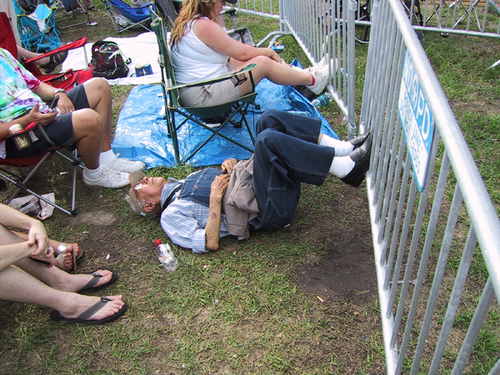 No, he's not dead, just resting between acts. 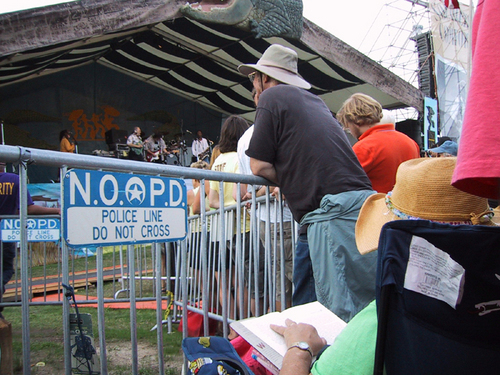