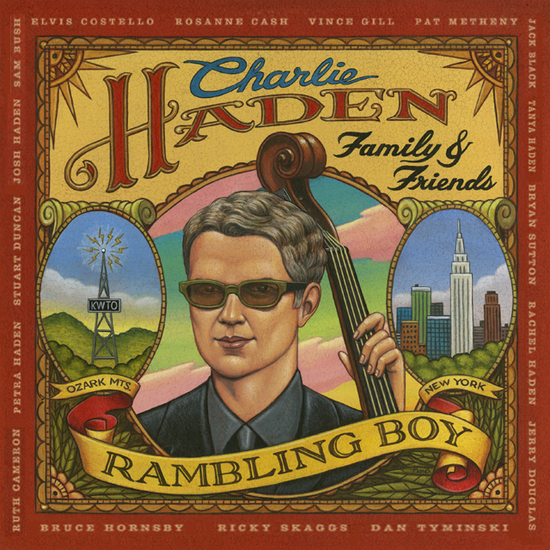 This summer, I was contacted by the folks at Decca/Universal Records about doing a cover for the legendary bassist Charlie Haden, the jazz great and Liberation Music Orchestra leader who has recorded countless classics with the likes of Ornette Coleman, Keith Jarrett, and John Coltrane.  But this record—Rambling Boy—is something of a departure for Haden: a bluegrass album that takes him back to his roots. Charlie grew up in the equally legendary Haden Family Band, whose live country radio show back in the 40's and 50's brought him into the circle of the Carter Family, Jimmie Rogers, and Hank Williams. For this album, he brought together his wife Ruth and his own children, daughters Tanya, Petra, Rachel, and son Josh to record with him, as well as friends like Elvis Costello, Roseanne Cash, Vince Gill and Pat Metheny.The result, which will be released this week, is a beautiful collaboration that's anchored in family and tradition.
Hats off to Fanny Gotshcall and Pat Barry at Decca for being so great throughout, and to Charlie and Ruth for their commitment and dedication to getting this cover just right. I know they're going to have huge hit on their hands with this album.
And by the way: The Sunday New York Times ran a feature on the album in the Music section yesterday, which was pretty exciting to see. And there's also a wonderful profile of Rambling Boy on NPR's Sunday edition, with cuts from the album and a great interview with Charlie and the family. Well worth a listen.