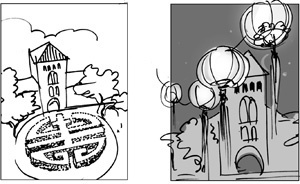 two of many roughs for the assignment
Do you ever find yourself pouring out roughs in an attempt to solve the illustration problem only to find when they choose one, you have the problem of now having to draw something that isn't really you... but, you're the one who came up with the idea?!

I did that on my latest job. A cover story about a university embracing the next century of China's undoubted dominance with courses, Chinese campuses and research into the culture. The client was great. They liked the image that I thought was the best solution. Then I had to face drawing it. 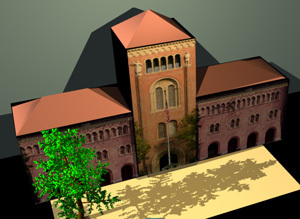 Carrara to the rescue.
Perspective was the problem. I hate dealing with vanishing points and this was 3-point...! I'd rather parallel park a semi on the left side of the street at Madison and 60th. So I sought help. Tried scanning my trusty Graphicraft perspective charts from the early '70s. Tried Painter's perspective grid. Tried making a grid myself in Illustrator. No help. Then I decided to learn Carrara, a 3-D program that I never really popped the lid on. Of course, I only had a day, but I managed to get something to work from and even mapped a photo of the facade onto it. 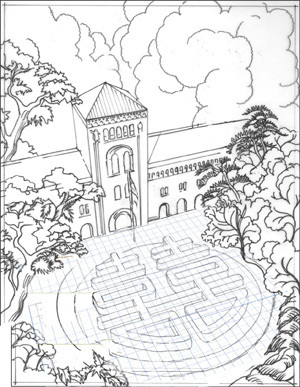 Approved sketch.
The sketch wasn't so difficult after getting my model made. Perspective was still a bit off, but much better than on my own. 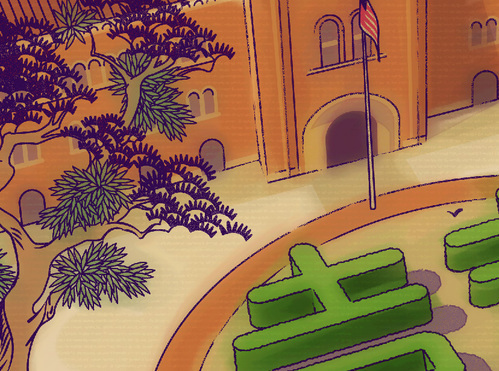 screenshot close-up of the final image
The drawing started out in Illustrator and I was pretty pleased, felt that it could be used as a fall back if my experiments at producing a style that reflected the Chinese culture didn't pan out. This was starting to feel like Project Runway. I didn't really know what I was going to do, but it felt good to have to come up with something I'd never done before.

I ended up taking the file into Painter and mushing the color around with the watercolor tools. Then bringing it back to Photoshop and marrying it to the line which I roughed up a bit. It was actually the most fun assignment I've had in a long time. I just handed it in and the AD seemed very pleased.
Topical: Illustration
Latest
Summertime Super Sweetness Recent Stamps Sunday Biz Making Lace for the Met Museum The Sun Sets on the British Empire: maybe not so much Blockhead For John Exploration How I Spent My Summer: Part Deux How I Spent My Summer: Part 1
Topics
Topics
Illustration Knitting Other Things Studio Tour
Archive
Image Galleries
Illustration Postage Stamps Painting Knitting Embroidery Sketchbook Random Photos
© 2023 Nancy Stahl