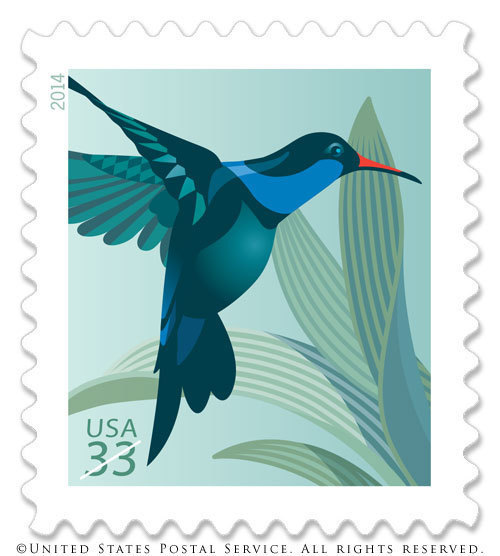 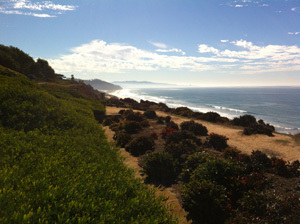 My brother, John, lives in Southern California overlooking the Pacific with a spectacular view from high on a cliff. (He went into business, not art.) John isn't exactly an animal lover so it was surprising to see how enthralled he was by the hummingbirds that would come to feed on a bottlebrush plant outside his condo. He knew their habits. When they would appear, how they would go clockwise around the plant, gathering nectar from each blossom for a set amount of time. He talked about their colors, the speed of their wings and ability to hover.

Then the Homeowner's Association decided that the landscaping for the community needed to be uniform or something and they took out the bottlebrush (which would have been just left of where I stood to take this photo). It's still a mystery to me what was so offensive.

Six years ago I began this stamp for the Postal Service as part of what was called an "unofficial series" of animals. I chose the hummingbird hoping that I could give a printed pane of them to my brother. The series came to an end without the stamp being unveiled, so I thought it was dead. But still, I couldn't show it to him as that isn't allowed by contract.

I no longer have to keep my big mouth shut..! Yippee..! The stamp has been previewed and will be out as a postcard rate sometime in 2014.