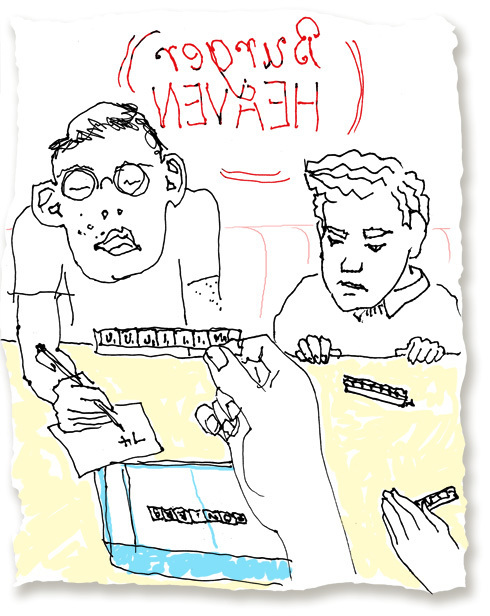 I decided to draw this with my left hand while eating my bowl of oatmeal this morning. I may have hit on a way to finally loosen up..!
Last night I went to my first Scrabble Meet-Up. You might remember I mentioned going to Boggle Meet-Ups in the past. Twenty or so strangers (mostly) get together in a restaurant and play the game for an hour or two. I had heard from those people that the Scrabble games were more competitive. When it comes to word games, I want a challenge, so I met with 49 others last night at Burger Heaven on the east side to play.
We self-rated and slid into the booths with our travel Scrabbles and dictionaries. Across from me were Tim, a mouth-breather with acne and a strange balding pattern and Lee, an older gentleman who promptly ordered pancakes and ice cream and when it arrived perplexed us all by shouting repeatedly that he hadn't ordered it. Kristin, a pretty strawberry blonde 20-something who played nothing over three tiles long was on my right.

Tim started off the game by using all his letters to make the word P O N I E R S. I looked questioningly at Lee who had rated himself as a "senior" level player and he didn't pause for a second before putting down his word. So, I decided to ask, "Just for my education, what are 'poniers'?". Tim scoffed and said that they were people who played the ponies... why, what else would they be called? "Bettors?" was my answer.

I've accurately sketched the letters that I had to work with on my first go. U U J I I I M. Could it be any worse? I made the word J U S, asking if this French word had made it into common use and was therefore allowed. Tim declared it unacceptable and I removed it. The game went on. Tim won. As we were setting up for the next round, I looked up PONIERS, not a word. Then JUS, a word.

Something tells me that was my first and last Scrabble Meet-Up, although I may go back to Burger Heaven. They had great steamed vegetables and baked potatoes. If it hadn't been for this, I'd have never known.
Topical: Other Things
Latest
Summertime Super Sweetness Recent Stamps Sunday Biz Making Lace for the Met Museum The Sun Sets on the British Empire: maybe not so much Blockhead For John Exploration How I Spent My Summer: Part Deux How I Spent My Summer: Part 1
Topics
Topics
Illustration Knitting Other Things Studio Tour
Archive
Image Galleries
Illustration Postage Stamps Painting Knitting Embroidery Sketchbook Random Photos
© 2023 Nancy Stahl