Visit with Elwood and Maggie 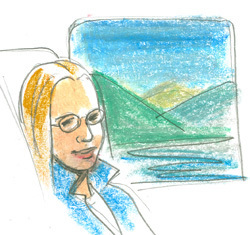 Zina on Amtrak
Yesterday I tagged along with Zina as she went up to Rhinebeck to interview our too long absent drawger, Elwood Smith. She had enough on her mind, but I managed to cause her more worry by arriving at Penn Station just as the train was called. A little flurry of cell phoning and we found each other in time to get down to the tracks and settled in our business class seats.

I'd forgotten to bring my camera, but decided this would fit in with my new daily exercise of drawing from memory something that happened to me the day before. Forgive me, it's a new exercise and really not quite ready for the light of day.
Zina struck up a conversation with the train conductor over the red poppy in his hat, set there to remember veteran soldiers. He was a Viet Nam veteran and was so pleased that someone had asked. I thought Zina would do an interview on the spot. I could see her drawing him in his element. But there wasn't time. We were pulling into Rhinecliff.

Maggie and Elwood were waiting for us on the station platform, waving and smiling on a pretty late spring day. 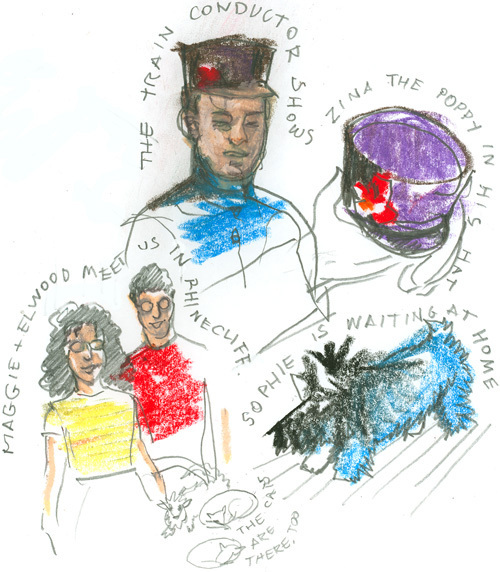 Their house is beautiful and their animals endlessly entertaining. (You can tell from my sketch that I'm more interested in dogs than cats, but the cats were full of personality, too.) After a bite to eat, Zina and Elwood went off to Elwood's studio while Maggie and I walked into Rhinebeck. The farmer's market was winding down. Still, I found some hand made soap and Maggie some kind of vegetable pate and pasta. Before you knew it, cell phones were ringing again, Elwood found us walking toward their house and Zina and I were back on the train heading home.

It was a short but perfect little visit for a glimpse at the Wonderful World of Elwood. Thanks, Zina for letting me join you..!
Topical: Other Things
Latest
Summertime Super Sweetness Recent Stamps Sunday Biz Making Lace for the Met Museum The Sun Sets on the British Empire: maybe not so much Blockhead For John Exploration How I Spent My Summer: Part Deux How I Spent My Summer: Part 1
Topics
Topics
Illustration Knitting Other Things Studio Tour
Archive
Image Galleries
Illustration Postage Stamps Painting Knitting Embroidery Sketchbook Random Photos
© 2023 Nancy Stahl