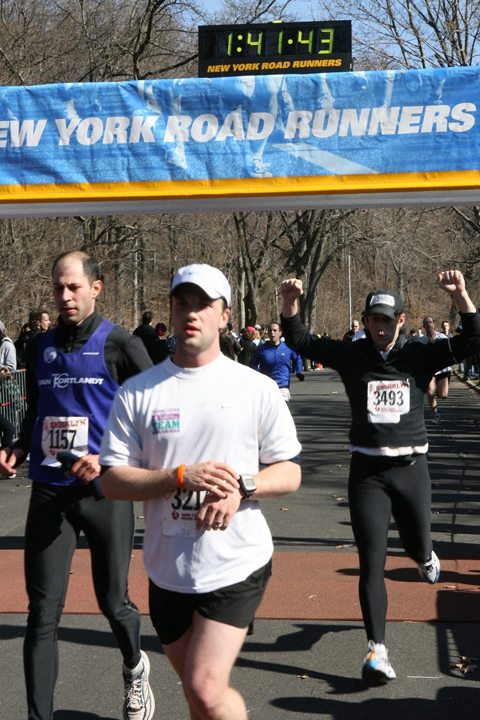 I began thinking of the Marathon in the cold of winter. Here is the end of the Brooklyn Half-Marathon.
The New York City Marathon is Sunday. I ran hundreds miles preparing for the race and saw so many cool parts of New York City. My training started in the summer and on weekends I had to run the hills of Pennsylvania. My calf muscles killed in July and August but since then I have run through Brooklyn and Manhattan. I run at the same time each afternoon and I get to see some people over and over. I did some doodles of these people to remember this time. Again this year I gained entry into the marathon through the Childrenâs IBD Center at Mount Sinai . With the generosity of a bunch of people I raise almost $9000 dollars, way over the $2500 commitment (the website only reflects online donations). Thanks to everyone who helped. I fit all the running in with a really busy year of illustration work. Thanks to all my clients who in small ways gave me breathing room here and there which allowed me to stay on schedule. The running this summer and fall was surprisingly difficult. I ran all winter and spring in short races and enjoyed running fast. Training for the marathon again required me to change focus and build up the miles and slow it down to do longer and longer runs. I had a few minor injuries and still nurse a few but, fingers crossed, Iâm going into this one as good as I had hoped. My goal is to run it well. Last year I ran it very fast in the beginning. I was excited and energized and ran my fastest half-marathon up to that point. I began to fall apart in Manhattan and the late miles were agony and I missed my goal of 3:30 by 2 minutes. I hope I can do better than last year but my real goal is to run it and NOT be injured when itâs over. Last year I pulled muscles, feet were blistered and my shins were shot. Hopefully with the training I put in and decent weather, I can enjoy ALL of it. The marathon is really an amazing event. You arrive at the foot of the Verazano Bridge at 6:30 AM and then meander around. People from all over the world are there. Faces are painted the colors of flags, lines are forming around the portable toilets (there are hundreds of them) and everyone is in such a great mood. There is a mass movement of people into their corrals and after a national anthem, a cannon shoots off and the sea of people begins to slowly move as one. Soon you are moving and in it for real. Bay Ridge, Park Slope, Downtown Brooklyn, Williamsburg, Queens, The Queensborough Bridge, Upper Manhattan, the Bronx, back into Manhattan for the last 6 miles into Central Park and Tavern on the Green. Iâm so psyched! I heard this great little podcast about the marathon and the mythical âwallâ one hits around mile 20. The idea is that at 20 you deplete your store of glycogen and then need to burn stored fat, which is harder for the body to do. Runners train to ease this phenomenon and move through this phase using the fuel they consume during the race. Anyway, the guy spoke of how the pain and discomfort one feels at this phase is only temporary and as SOON as you cross the finish line it ends. It can seem like that pain would last for years. I took great comfort in that advice. Thanks for indulging me with this running obsession. I have a bunch of new illustrations that I will post here soon. I need to run this race and do it right and then become an illustrator and Drawger again. 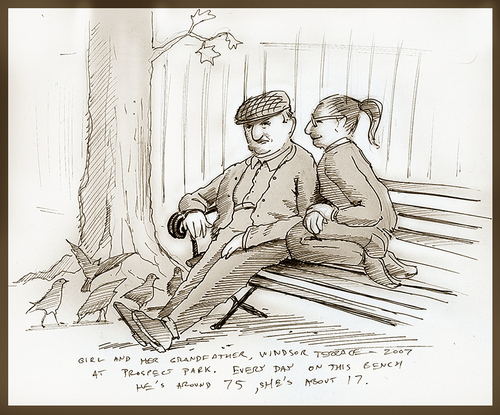 This sweet pairing I saw almost every day. I imagine it's a grandfather and grandchild. They sit together every day and seem to talk and laugh. She sits turned towards him and he stares out with a steely expression.
I did some drawings in my sketchbook of some of the things I saw this fall while training... 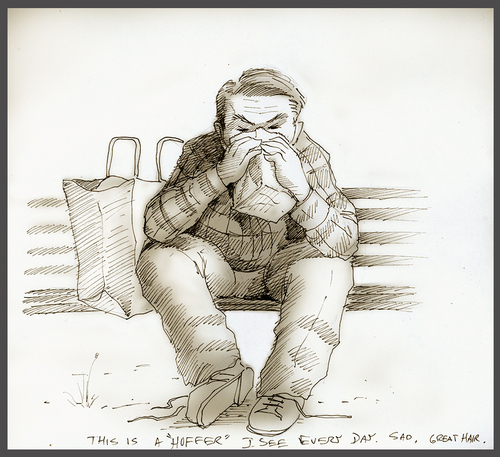 This guy is a "Huffer" (Glue Sniffer). I see him every time I run. He wears flannel shirts all the time; even in the summer and has a great head of hair. I think it's the glue. 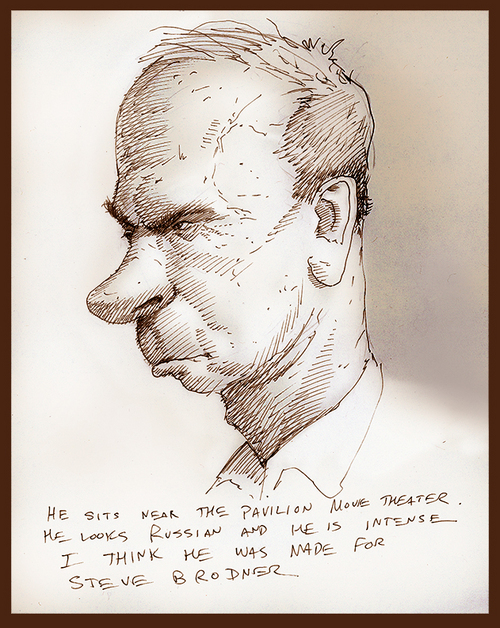 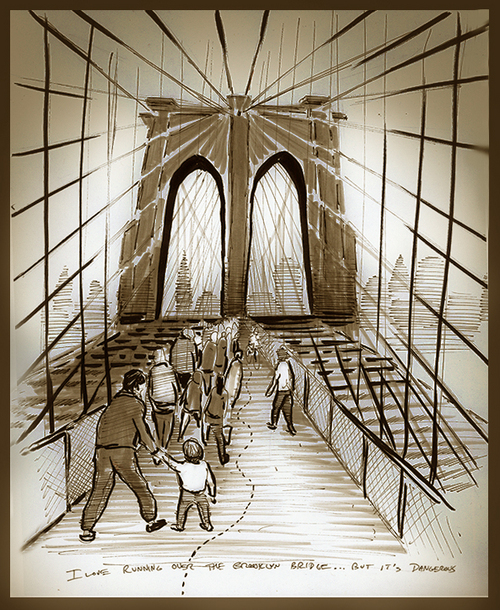 On longer runs I love running across the Brooklyn Bridge. It is majestic and the sight of the Statue of Liberty, Governor's Island, and Manhattan gives me chills. It's a mighty hill though, and on good days not an easy run. People come to walk over it from all over the world and do so like drunken sailors; meandering around the walkway holding cellphones and cameras. I run over it like a running back avoiding tackles. 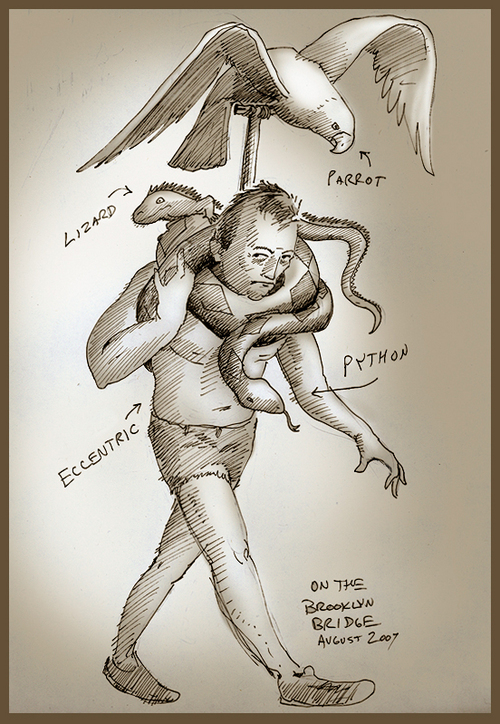 Okay, THIS was my favorite moment. I was running over the bridge and saw a guy up ahead selling balloons or cotton candy. No, not that...OH! It was a bird on a guy's back on a perch. As I got closer I saw that he had a yellow python on his shoulders and as I started to pass him I noticed a large iguana sitting on the back of the python. The guy was shirtless and walked as it he was annoyed with the attention. I love New York. He was walking to Brooklyn. 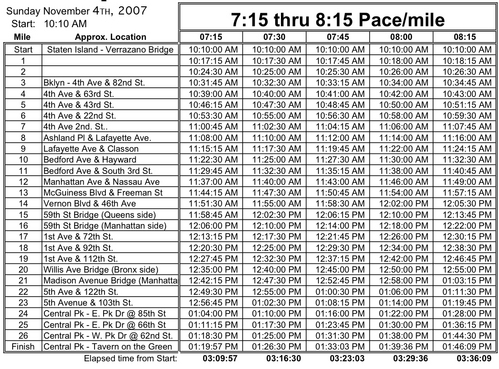 Here is a pace chart for the people who asked for one. I will hopefully pass these points at these times.
This is a little film that gives me chills to watch.
This is the entire course shot in fast motion from a car. It travels the entire route. 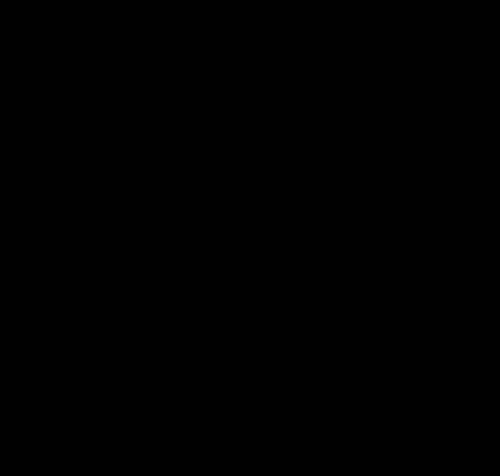 How can I write this and not have it dripping with disappointment? Hmmm? Okay, I ran a really great 25 miles. My last mile took over an hour. First, let me show you my stats up to mile 25...
Everything about my health going into the race was as good as I could have hoped. Even a fall and dislocation and hip bruise were recovered from by November 4th. I do recall the emotional dive I took after mile 20 of last year's marathon and the only fear I had was it occurring again. I really just wanted to run smart and even and finish strong. I ran even but did have a few things happen that affected my race. Early on I started having a slight stomach ache. It lasted the whole race and it meant I chose to drink a bit less water than I should. This was my downfall. I was sweating pretty heavily due to the black shirt I wore and the escalating temperatures. Still, I felt pretty good until about mile 22. At mile 22 my right eye and ear were not operating correctly. My right eye would not focus and my ear was popping. I know I was going to have to slow to make it and I started to turn it down a little. I passed my family at 5th and 93rd and they all said something was not right with the way I looked (insert joke here). I entered the park and began the last curve of the race. I started to see that I could not look right down in front of me without getting dizzy so I looked way down the road. This took me 3 more miles but at mile 25 I was not steady and found myself unable to go straight anymore. I moved to the side to not affect other runners and wanted to walk a bit, but I collapsed instead. I was on my knees and used the guard-rail to raise myself but fell again and did this about 5 times until medical help stopped me from trying. I went out. I awoke on the lawn with emergency technicians around me taking my blood pressure and looking in my eyes. These people are caring but seem to be very concerned that I get up and walk. I wanted to sleep. I was trying to focus and not go out again because I was scared. The back story is this: On Saturday an Olympic Trial athlete died at mile 5 of the Marathon Qualifier race in central park. He apparently had heart issues leading up to the race that were diagnosed when he was young. This caused me a bit of distress. At my doctor visit as with most doctor visits, the conversation eventually goes to my father's death at 35 of a heart attack. My blood pressure is higher than it should be and I'm about to start medication to control it. I have no fear of death; never have and some might say I had a bit of a death wish. "TONKA" comes from that reckless attitude. Saturday night I felt a bit nervous for some reason and pinned a photo of Cassius to my hat and put Elizabeth's Cell phone number on the back of my number; something I never did before. I was on my back, Elizabeth could not get to me and I feared I was going to end this way. I tried to get up but could not, so was taken to a cot where I was at first covered in blankets and after I kicked them off covered with ice. They put salt in my mouth and would not let me drink. They were driving me nuts! So I swung my legs over the edge and got to my feet. I moved to the course again and with their help stared walking again. I walked the last mile. I was so bummed but began to see the joy on the faces of the people around me. The crowd was great and they were going wild. I threw off the blanket and started to jog the last 100 yards. I crossed the finish line, arms raised and with a weak smile. I have to heal now and try to put the bad part of the race out of my mind. I take comfort in the times I had up to mile 25 and the fact that I am right now in my studio, doing a fun job and have such great supportive friends. Thanks Everyone. Tim
Topical: Procrastinations
Latest
Napoleon for Smithsonian If Animals were like Humans Michael Brown for Esquire Je Suis Charlie The Boat Duck/Rabbit Illusion for Nautilus Arcadia Contemporary Soho Putin for the Wall Street Journal Adam Silver for Sports Illustrated The God Project for Stanford Magazine
Topics
Topics
Procrastinations
Archive
Image Galleries
Stuff I Do Photographs and Nonsense