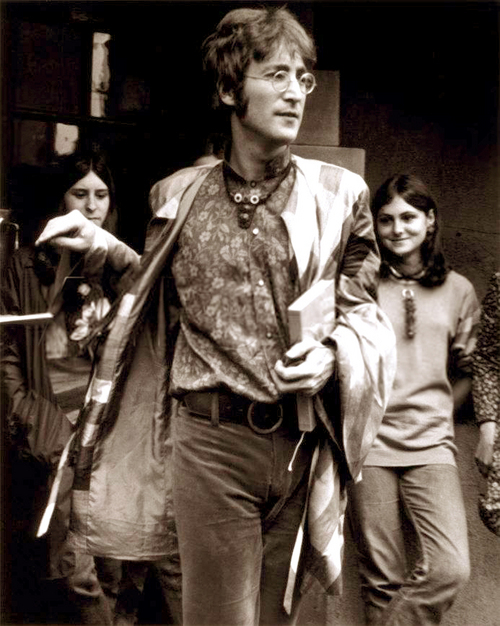 My favorite Lennon look.
powered by ODEO Music reaches the memory in a powerful way for me. When I was about 14 or 15 I was forging ahead in my life, starting to mature and figure out who I was. The loss of my father at 9 was not hurting me anymore and with that, the memories of him faded. It's a survival tool to forget. It's as if the mind packs things away so you can move about the world without tripping on the clutter (insert messy studio joke here). At 15 I was lifting weights, hitting my speedbag, riding my 10 speed around, and thinking about girls, or in my case, Jennifer. Not much else got into my head. One afternoon I was hanging out with my friend lifting weights in his basement when he put on a scratchy Beatles album (for those under 30, 'Album' refers to LP records; the large circular discs the size of a dinner plate that you put on a record player). All the songs were familiar but it was 'Because' that resonated. I remember how my day was stalled in thought. My father played Abbey Road and perhaps that was the last time I remember him playing music. Dad flooded back into focus; his beard, his voice even the feeling of hanging on him in a swimming pool. The sound of Abbey Road still gives me a deep sadness. In college as I began to sit at an easel for long periods of time, music was my airplane and allowed me to travel to new places or old ones. John Lennon was the most honest and thoughtful artist I listened to and for me, in that time, I found each new Lennon album for the first time. Music is great like that as it waits for you to discover it and experience it like it's 1963, 1971 or 1980. On December 8th, 1980 John was killed. I wrote last year of my reaction to that event. Lennon remains a large figure in my world. Thanks to another Lennon fan, Stephen Kroninger, I have many more recordings of John this year. Of particular interest are demos. I like hearing the process and some of these official and unofficial releases reveal the genius as it evolves. This song is particularly raw and honest. Enjoy.
Topical: Procrastinations
Latest
Napoleon for Smithsonian If Animals were like Humans Michael Brown for Esquire Je Suis Charlie The Boat Duck/Rabbit Illusion for Nautilus Arcadia Contemporary Soho Putin for the Wall Street Journal Adam Silver for Sports Illustrated The God Project for Stanford Magazine
Topics
Topics
Procrastinations
Archive
Image Galleries
Stuff I Do Photographs and Nonsense