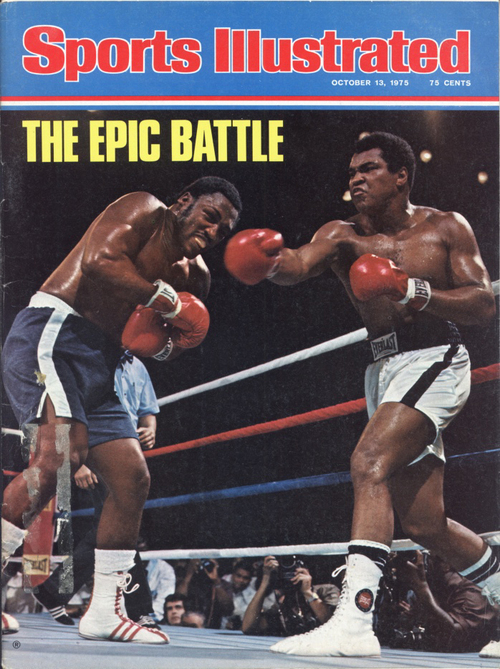 One of the nice things about being on Drawger is getting to receive gifts from fellow Drawgers.  One particular generous soul is Stephen Kroninger.  He's not only an enormously talented illustrator, he is a human encyclopedia, or, if I want to seem more current, a human wikipedia.  Stephen is a collector of music and ephemera and doesn't horde it (much) but enjoys sharing it.  My music collection is more complete because of his generocity and obsessions.
Stephen recently used Marc Burckhardt as a mule to deliver a package to me.  In it was a copy of Sports Illustrated from October 13th, 1975.  The  cover story was of the fight between Muhammad Ali and Joe Frazier in Manila, their epic third fight.


I received my first copy of this when I was 10.  A year and a half earlier my father had died and my mother and 2 brothers and I were still trying to sort things out.  I still have no idea just what was in their heads at the time, but I recall what I was going through.  I was forever angry and feeling put-upon.  I also missed having a father around.  Our beloved Uncle Eddie O'Neal surprised the boys with a subscription to Sports Illustrated.  It may seem like nothing today, but for us it was a real magazine and it was grown up and intended for us.  We could read about all sports and see the most amazing images.  We all were sports fans; my brother baseball and football and I loved boxing.  My younger brother would become a hockey player but was 7 at the time.


Sports Illustrated was so great.  I would get all the boxing stories and pour over them, ingest the information then carefully cut out the photographs and glue them onto sheet or cardboard that started to move across my bedroom wall.  I loved the photography and in the issue that Stephen sent, all were shot by the great NeilLeifer, article by Mark Kram.


Ali was a marvelous figure in my early world.  He was everywhere and I have all kinds of memories of him.  With this fight the photographs were different though.  Something was not pretty anymore.  The opener is stunning with both heads side-by-side showing the damage that 15 rounds in 100 degree heat can do.

So, it's appropriate that I give thanks to several figures here.  First, thanks Stephen for the magazine and all the gifts all year long.  Thanks to my late Uncle Eddie who suddenly saw that he was a shadow father to a bunch of boys he never thought he'd have to be.  HE continued that subscription for about 10 years.


Thanks to my family for allowing me to work out who I would be.  Fist holes circled the room and these posters would move to cover the evidence.  Finally to the great ghost himself, Muhammad Ali.  I should have latched onto Picasso or Degas but artists are built in funny ways.

Have a great Thanksgiving everyone. 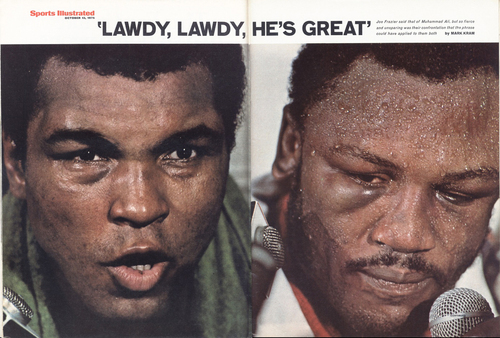 This spread was amazing to me and shocking too. Both me gave so much in this fight and the choice to show them side-by-side was a brilliant one. 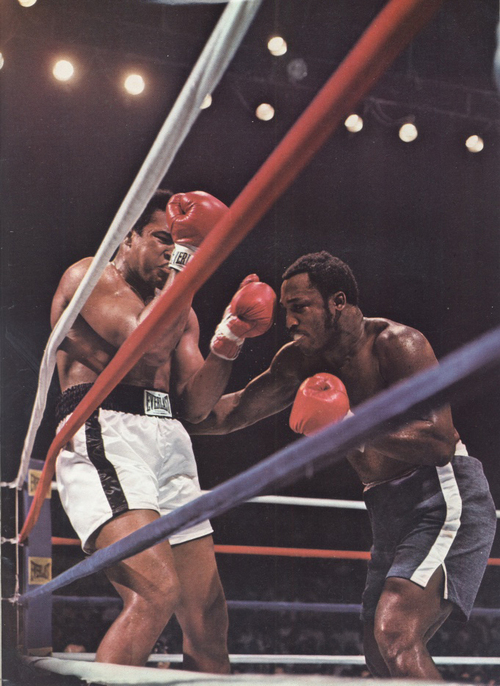 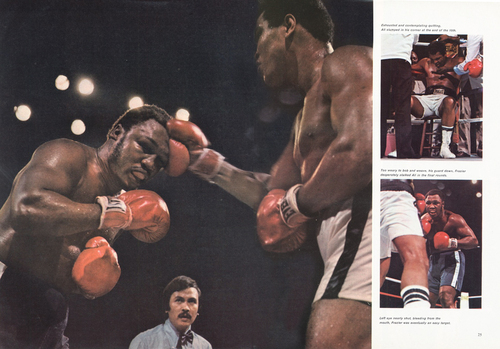