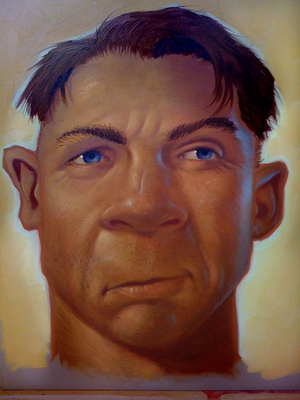 The demo portrait of a thug
To end my month of travels and talking, on the invitation of Robert Hunt, I went to San Francisco.  CCA invited me to come out to talk about my work and career.
Putting together a presentation of one's work and career can sometimes be reaffirming or it can condense one's career into too small a story.  I felt both this time.  You've all done it, given talks and have a narrative of your career that is accurate but not complete.  You want to get them out of there in under 5 hours after all.  I think the recent series of talks made me shorten and focus this career story in an effective way, so in the end I was happy with what came out.  I never take notes with me, just my work.

I've never been to San Francisco so I was interested in what the hubbub was about.  Robert picked me up from the airport very late so as he drove me to his home in Marin, just north of San Fran, I could not see much.  As we got closer to Robert's house, I could see that he lives in an awesome town with rolling hills and lovely homes.  Robert and Lynn have a great house that is situated into a hill so  his back yard goes straight up with flowers and trees with trails all the way up.  The thing I noticed was that out every window was a great view of gardens.  The living room is killer with craftsman or mission styled furniture and a blooming magnolia out the window.  Robert has a studio outside the house that is a converted garage.  This is a big studio.  After seeing Marc and Robert's studios, I have to clean up.  I did feel somewhat proud of how neat I keep my paints however, since Robert's were all cap-less and messy.  I found the flaw!

We went out for a brief tour of San Francisco followed by a lunch with a friend and an artist I admire, Dugald Stermer.  I'll probably get this part wrong, but Dugald is not only a great illustrator and teacher, but works with a program that rehabilitates people with drug and alcohol problems.   We had lunch in a great restaurant that is staffed by members of the program.  Following lunch we went to visit his studio that is in the complex.  Dugald has a wonderful space that is dark and covered with left handed guitars.  I counted 23 but I may have missed many.  Dugald's space is another studio that I wish I could move right into and start working.
I wish my good friend well and it was great to see him.
So, Robert then took me to CCA.  The school is a huge open space with each department having it's own area.   I arrived and soon began a demo.  The room filled quickly and I had just over 2 hours to do something for the young illustrators.   I did a cartoonish portrait over a charcoal drawing, demonstrating the method of painting wet into wet.

After my demo I went quickly into the auditorium or theater for my presentation.  In the crowd were some notable illustrators such as Mark Ulrickson, Owen Smith, Barron Storey, Adam McCauley, Joe Fiedler and others.  It went off without a hitch and there were some good questions at the end.
Onto a pub visit to end the night... Connecticut Yankee, I think it was called.  Fun to unwind after all of the public control.
The next day was my day of silence.  I stayed in a great hotel, the Palomar on 4th right off Market.  I was silent all day and spoke only when ordering food.  My goal for my free day was to run.  I ran to the edge of San Francisco to the Embarcadero and then north to the Golden Gate bridge.  The air smelled of salt water and spring and the run was amazing.  Every time I came to a peer I would run out to it and look around.  Man, I would love to live out there.
Thanks Robert for a great visit and for putting me up the first night.  Next time I'll bring the whole O'Brien crew and Cassius can use that treehouse.
Thanks to Alexis Mahrus for helping me at CCA and for all my fellow illustrators for showing up and hanging out.

A view out Robert and Lynn's living room window 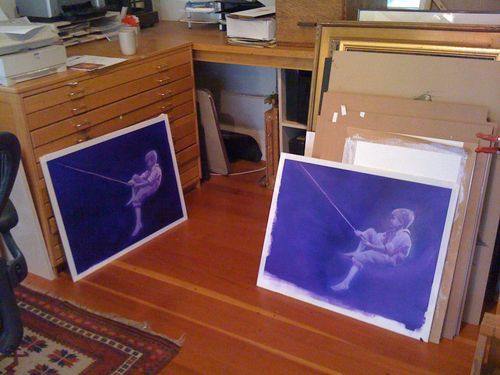 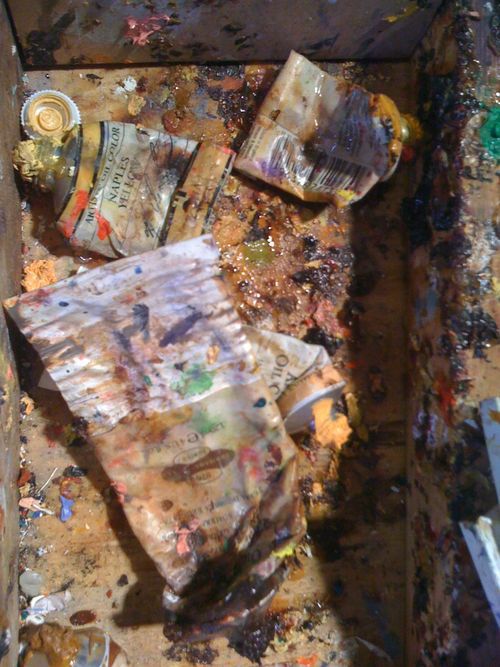 This is the horror that is Robert's paint box. 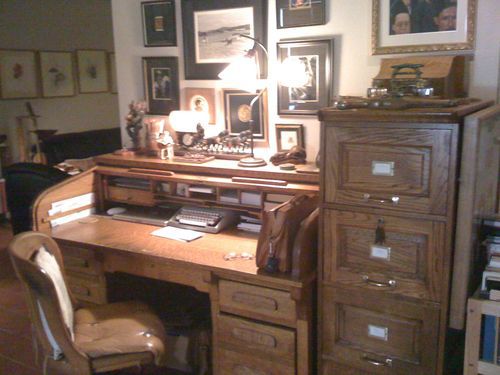 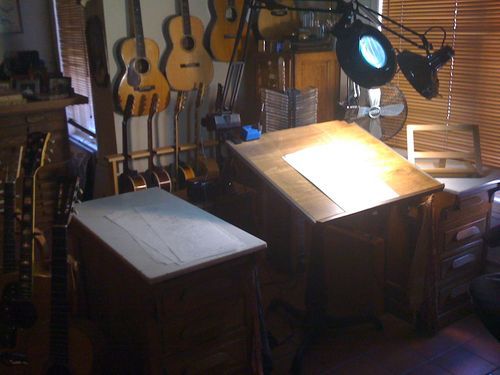 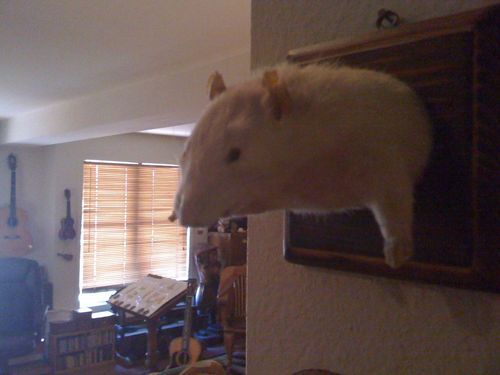 A prop from Willard pokes out of a wall. 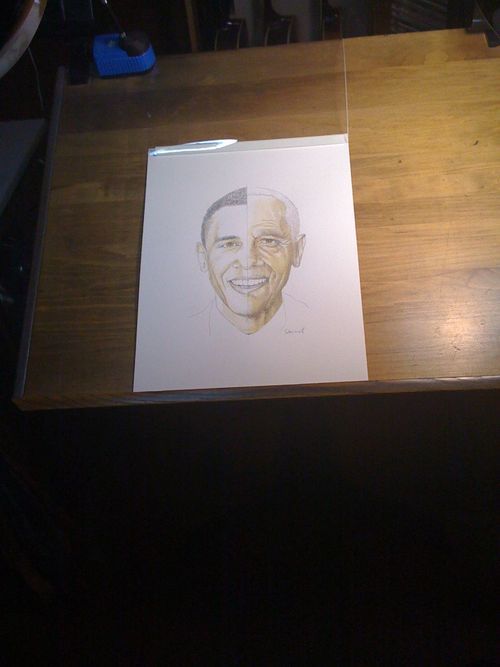 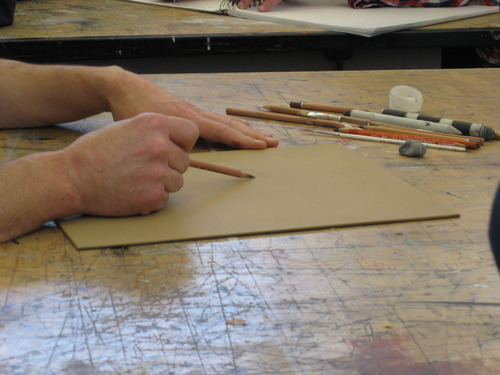 The students towered around me as I started to draw.
These were photos sent to me by Brynn Metheney...thanks Brynne!
I decided to do a demo of a portrait on a toned panel. 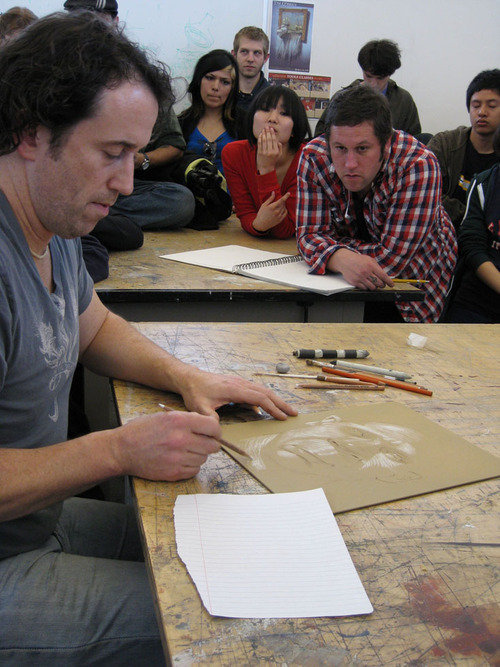 I like the kid in the background. I'm 5 minutes into the demo and he's already asleep. 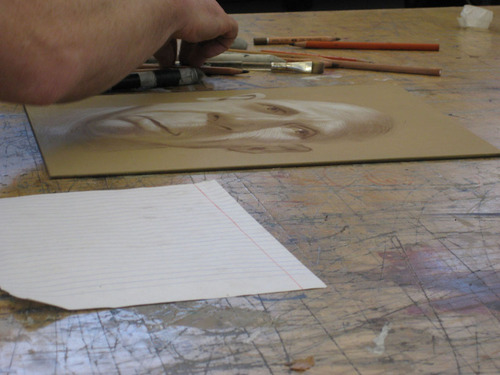 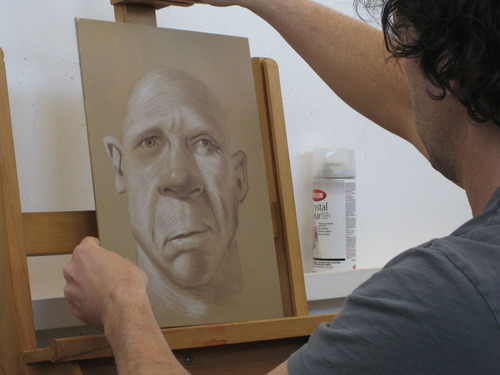 setting up on the easel 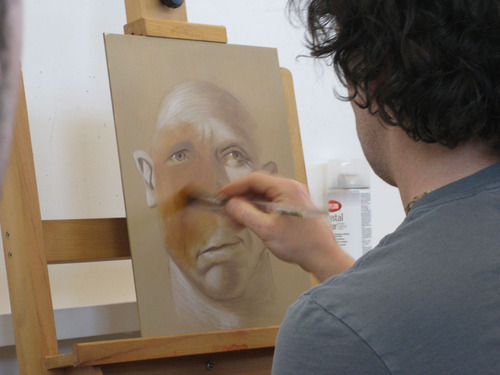 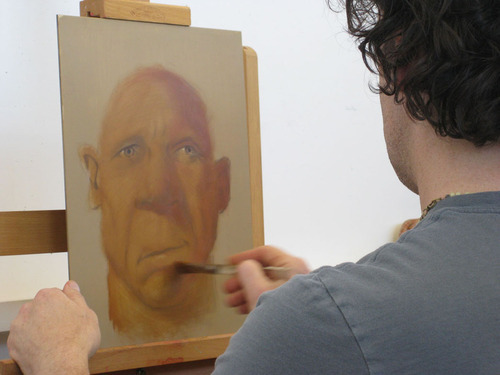 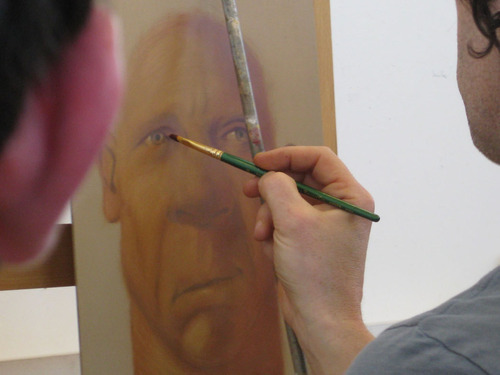 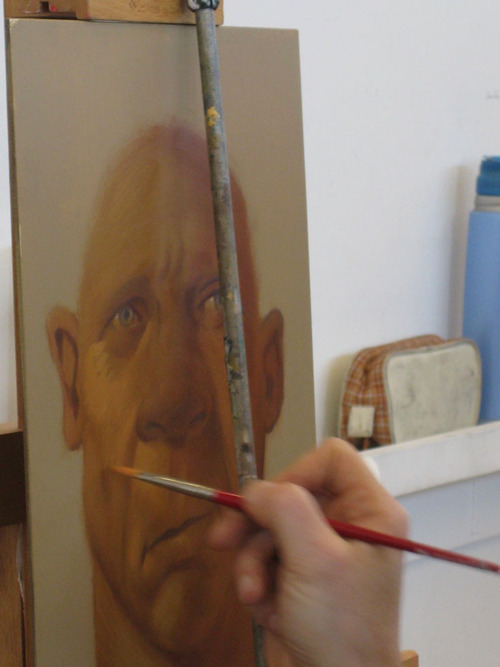 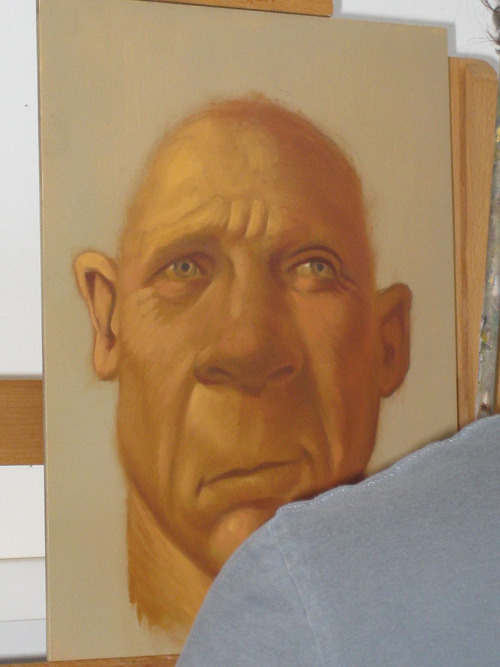 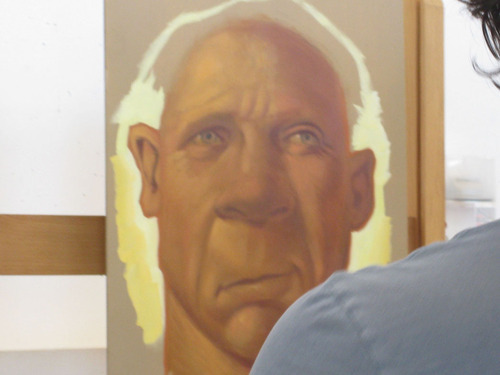 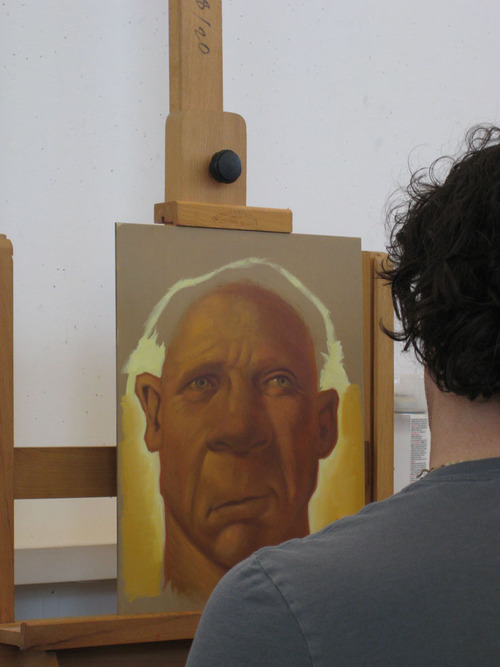 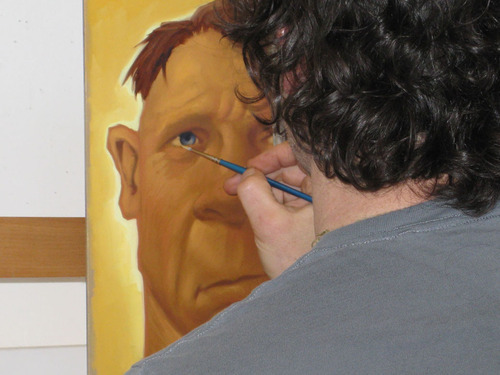 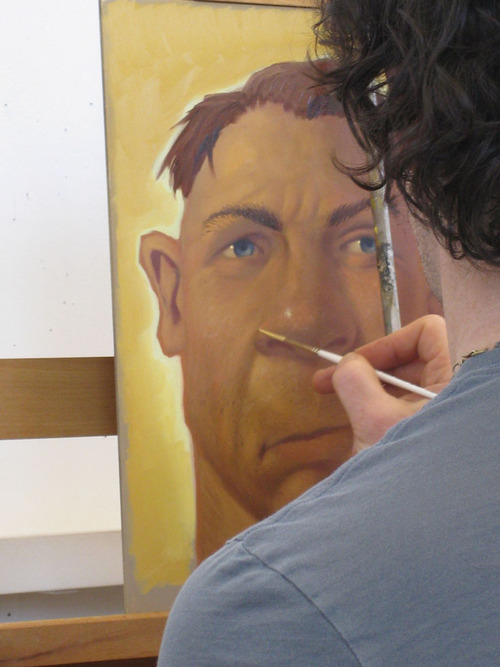 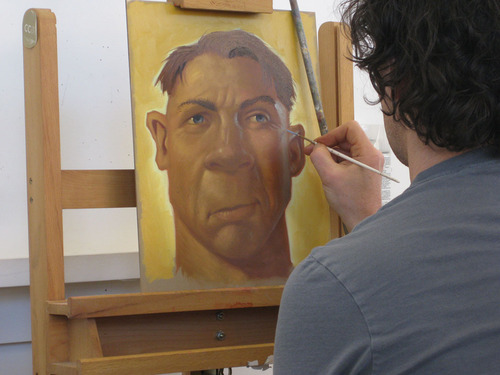 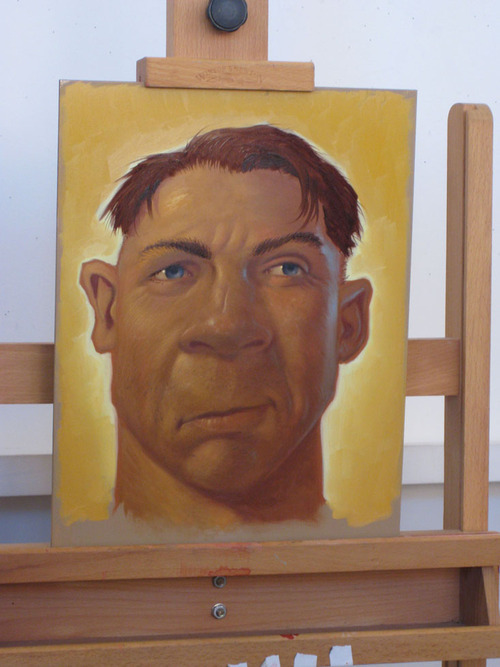 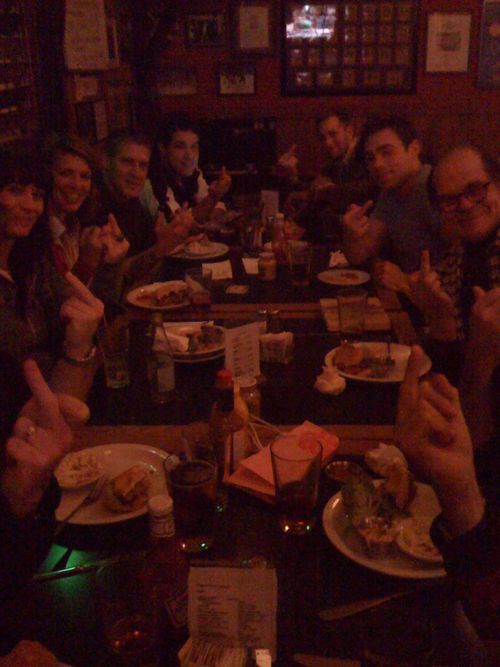 After lecture hang out was fun 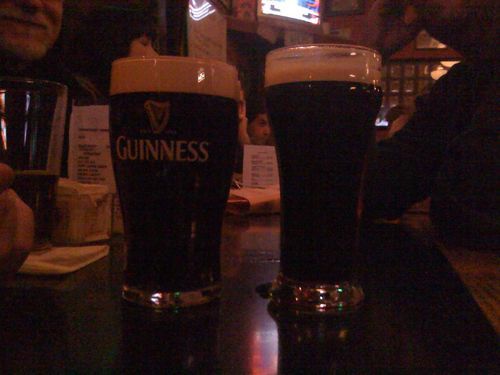 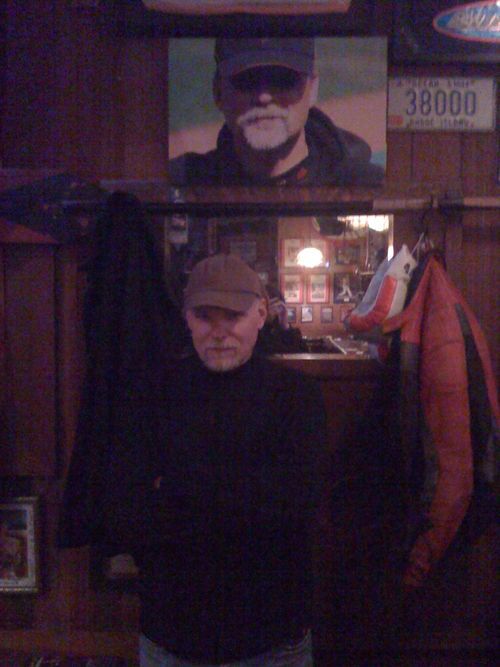 Robert is featured on the wall of the bar 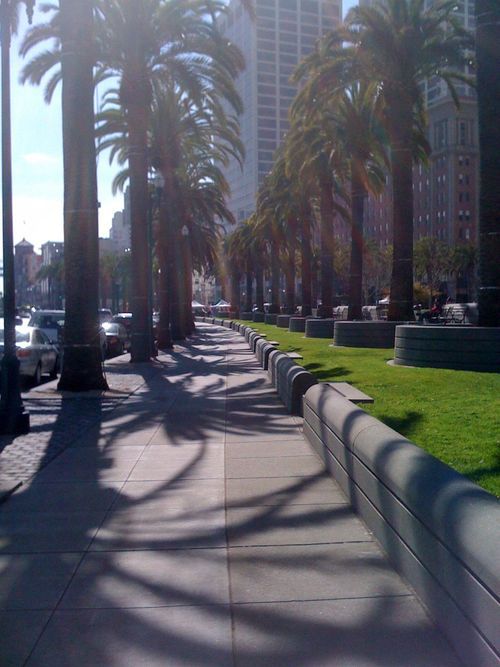 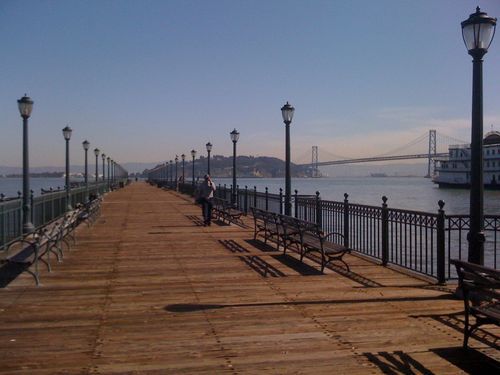 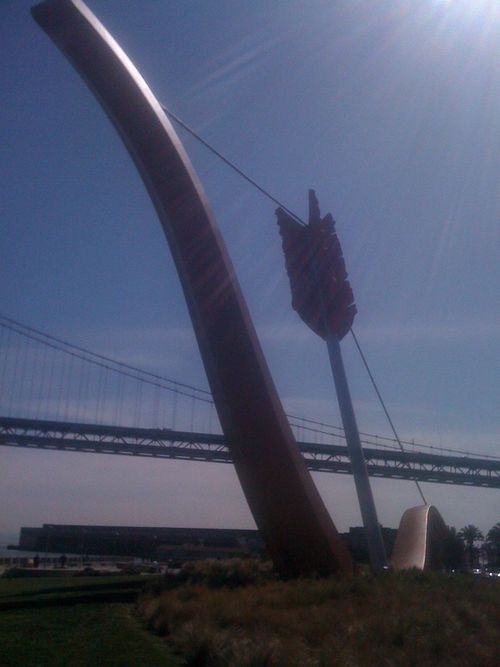 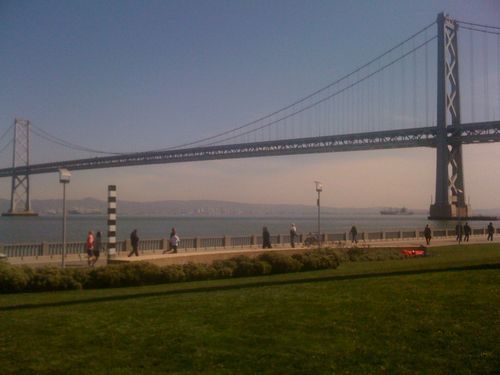 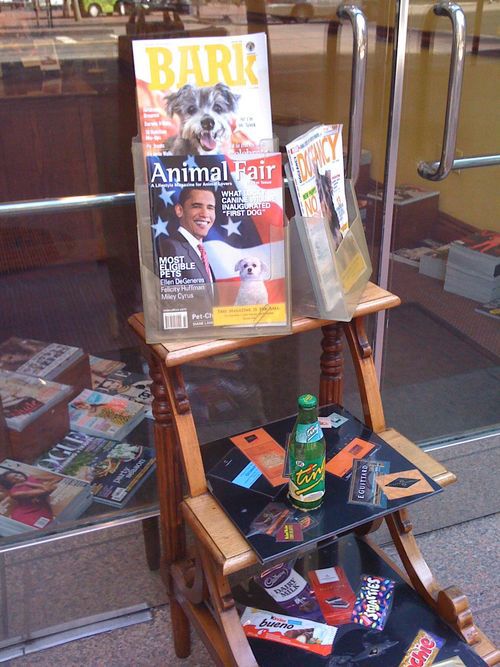 Finally, during my talk I was asked about where I thought editorial illustration, particularly covers, was at this moment.  I said that I thought as Obama was being presented to the public illustration was used often.  Since his election the public wanted actual photos of the president.  I said this will wear out and currently there is a bit of overkill with his face on everything from Time to Cat fancy.  I thought I was making a joke but then I saw this...