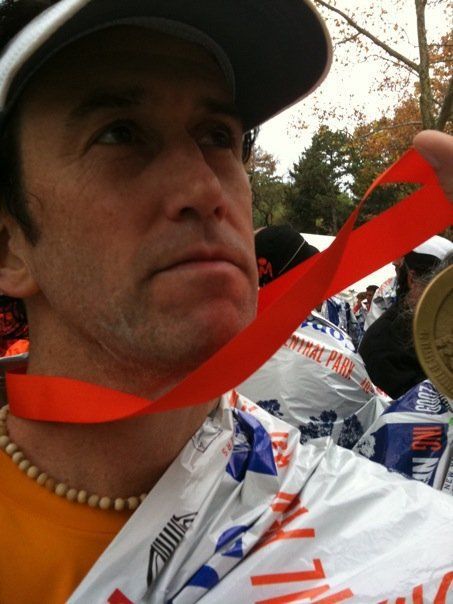 This year's New York City Marathon was great.  As I wrote last week, they're all different in unexpected ways.  Some things are unexpected hardships and some are unexpected easy patches.
For those who have asked and for those who wanted to see if I was going to croak, I'll offer this report.

The morning started with a worry of the potential rain.  I went to Staten Island with a chair, ski pants and golf umbrella.  Under all of that I stayed warm and cozy.  If you believe in karma I may have earned some good karma early.  As a 4 time NYC marathon runner I know fully well the challenge of the portable toilets running out of toilet paper.  I always bring my own roll and this year I had a funny 'Larry David' moment leaving a toilet.  Walking out with a bright, white and full roll of toilet paper I could see the people in line to go into the same toilet all eyeing my roll.  I blurted out, "This is mine, I brought it with me!"  They all smiled but then all looked concerned.  I then, out of guilt, reeled off sections for about 9 women in line.  All thanked me profusely.

The morning then got frustrating.  My wave was due to start at 9:40.  To get to my corral I had to check my bag then walk a long way to my start.  By the time I made it to my corral they had a 7 foot chain-link fence around it.  They closed the wave corral and would not let anyone in.  You get placed in a certain places in a corral based on your average pace.  Therefore, I had to now leave at 10 am and run with slower runners.  This is frustrating as they force you to have to weave through runners for miles.  People who traveled here from all over the world took this news hard and were climbing over toilets and the fence and running past guards.  I just put my head down and tried to keep calm.
This later start might have made me miss all the people I was supposed to meet but I had to no worry about that.

The race went off and I listened to Pearl Jam's Yield and I ran up the Verrazano bridge.  I suddenly realized by mid span that I was not behind a bunch of slow runners but running with fast runners that were knocked out the the last wave.  I was running pretty fast from the start but once I was going DOWN the bridge I was not out of breath, I could see that amazing city and was feeling fine.
I ran easy and fast all through Brooklyn, stopping at mile 8 to say hi to Cassius and Elizabeth, seeing Ellen Weinstein at Fernada Cohen's place in Fort Green ( I stopped and ran back yelling "Ellen, ELLEN!!!") and felt great.  My thoughts were about whether or not I would regret going out too fast.  I would try to pull back.  Just before the half-way point I tried to slow down but I sped up again.  At one point, I think mile 16 I took off my shoe to see what the hell was under the ball of my left foot.  Untied the shoe, took off the sock…nothing.  I put it all back on and started off again.  That mile was the slowest of the race, 9 minutes.  I scooted along and felt great all through first avenue and into the Bronx.  The Bronx is where spirits break and the wall hits runners.  I felt no wall at that point.  I did stay over 8 minute miles for the last 5 miles but it was calculated to not die at the end.
Coming down 5th avenue I  was thinking that I only had 4 miles to go and I was imagining my average course at home.  I tried to visualize where I would be in Park Slope, seeing the street corners and trees in the park.  At 5th and 93rd I saw my family cheering section and I stopped to say hello and prepare for the finish.  A few blocks later you turn into Central Park.  I could not remember if there were hills coming up so I entered carefully.  To my surprise there were a series of downhills which lifted my spirits.  Then a dreaded hill just before mile 25.  THIS is exactly where I passed out 2 years ago.  My arms were actually tingling at this point so I put them over my head  and then stared saying "GO, GO, GO."
I could hear the crowd roaring and started to think of my time.  MY watch said I did a sub 3:30  marathon but it was NOT matching the course and I had to ignore my GPS and plow ahead.  I see balloons and an arch and I pump my arms and legs and UUUUUHHHGGG, that's not the finish, that's the viewing stands!!!   I kept going and finally see the finish line.
Now, as a sign of my vanity and clear thinking at the end of the marathon I did a funny thing.  They photograph and video your finish and in the past marathons or all races in fact, you may think you look great but you see that just ahead of you is an old man, a plump woman or a guy in a clown outfit.  I had .2 miles to go but I looked for healthy, strong runners.  I ran diagonally to be right in with them and then pumped my fists as I crossed the finish line with a big smile.

The race was great and I did not see the clock so I only had my GPS to gauge my time.  I figured close to my personal best.

At the end of the race you walk with thousands of other runners with your medal and a foil cape and shuffle your feet for a half mile to your gear.  Next to me a man from Germany swooned towards me and I kind of caught him.  I grabbed his hand and put it over my shoulder, holding him up.  He was passing out but I carried the guy and distracted him by asking him questions.  It was his first marathon and his first visit to New York.  Hopefully he will forever love New York and  the race.  I did my part.  Right next to me was a beautiful woman, a little older than me and I asked her how she felt.  She was fine and this was in fact her 54th marathon.  She was a REAL runner.  All I could think of was would I run another one?  I qualified for 2010 but I need a little time off.  I will find a reason at some point to do it again.
Anyway after getting to my sister and brother in law's apartment, I checked my time.  Thankfully, it WAS a personal best.
3:32:13.  My previous best was my first race, at 40 years old at 3:32:22.  That's right, 9 seconds faster.  I'm so happy that it was not 9 seconds slower then I would have regretted the start, regretted the Ellen stop, regretted the shoe removal.  Even with those stops I did it.
Was it 9 seconds faster for helping 9 women in line at the porta potty?

Thanks everyone for all the well wishes and I will now return to Tim O'Brien, artist.

This is the song that I was listening to when I thought about how good I was feeling.  Pearl Jam helped me through all my long runs this year.  Eddie Vedder's voice and the powerful duel guitars kept me motivated. 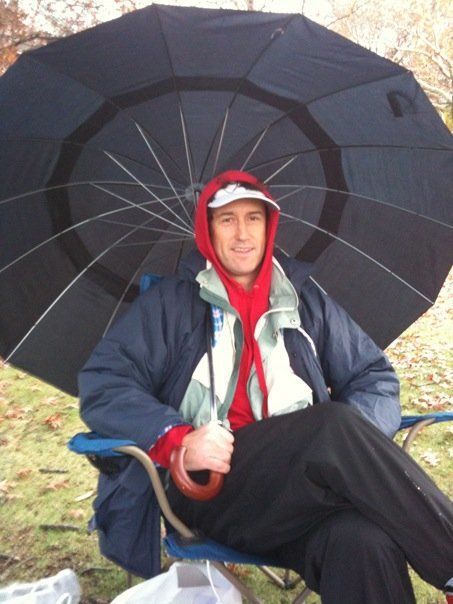 This is me in the morning at the start. All items are tossed and are donated to various organizations. The chair was 13 dollars and a good investment. 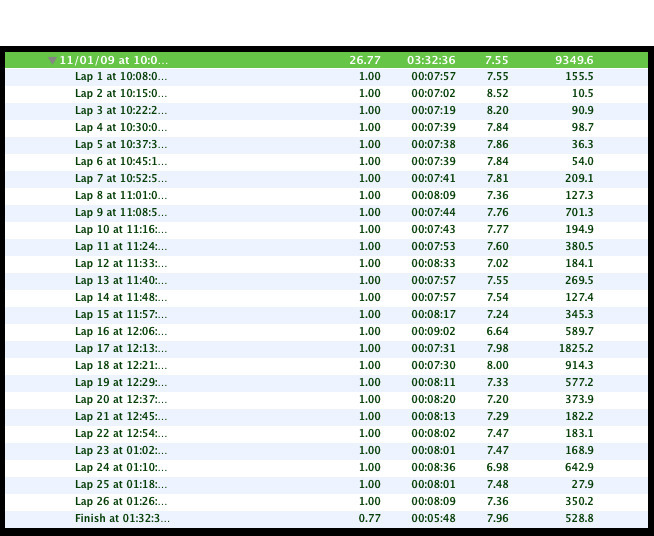 For those who have a GPS and use Ascent, here is the race. The first column is the time of day, the second is the lap, or mile. The third is the pace of each mile and the fourth is the speed. The last is the elevation.

This is from Ascent too. It shows how even or uneven the race was. The green is my pace and it stays pretty even until my shoe change and is off the charts for the family kisses. This is a valuable energy boost that is worth the time lost doing it. 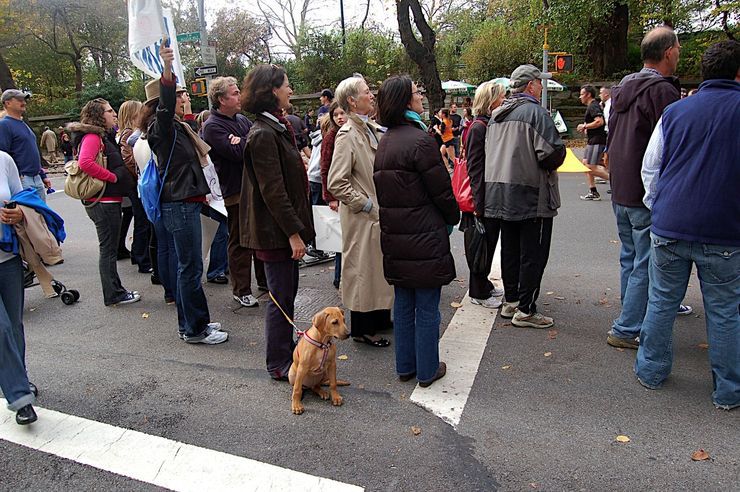 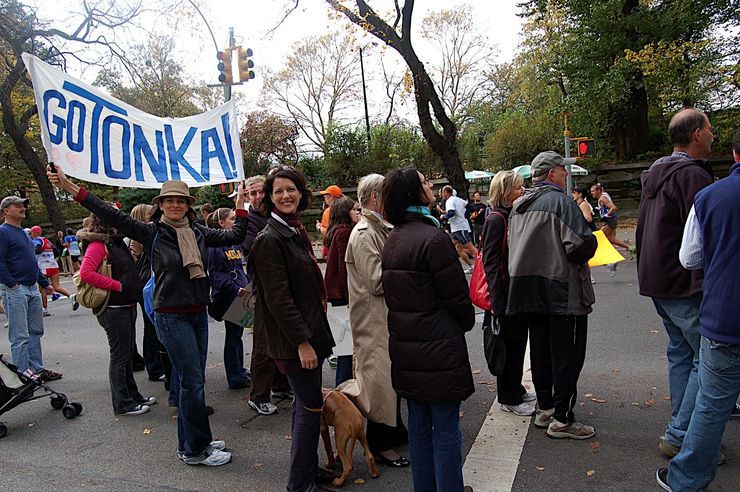 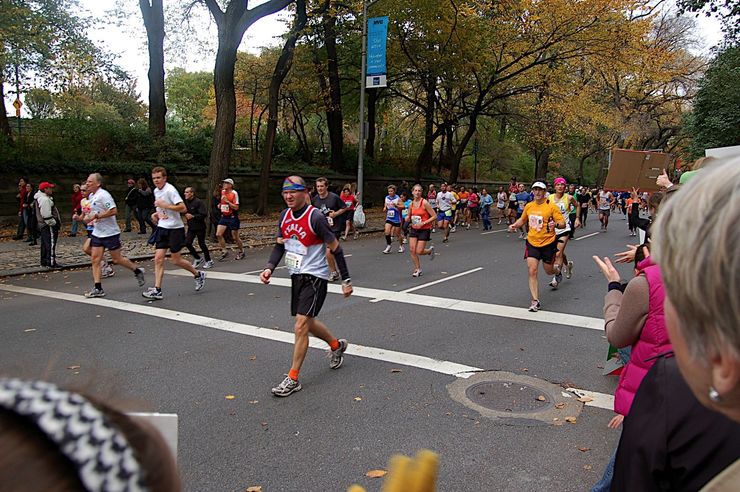 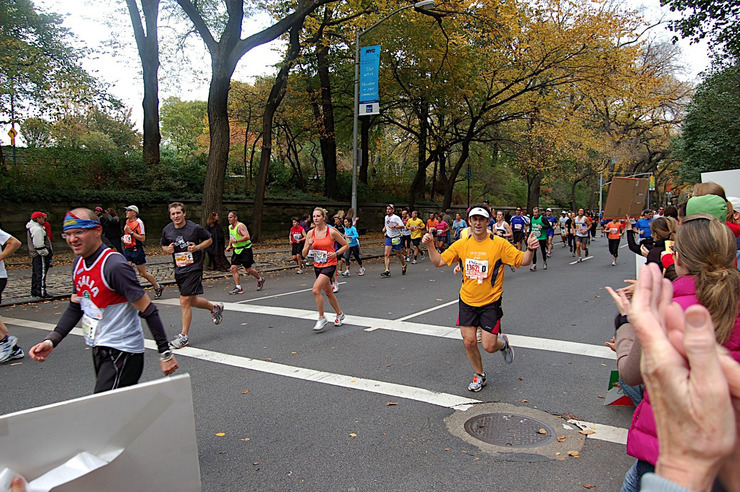 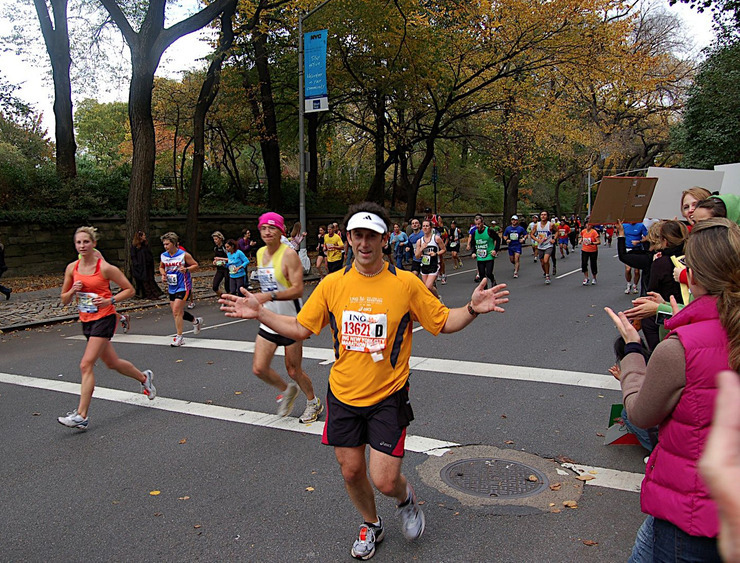 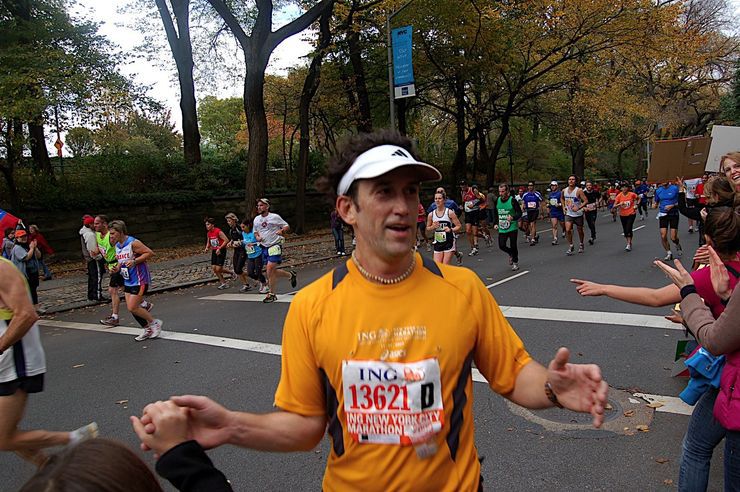 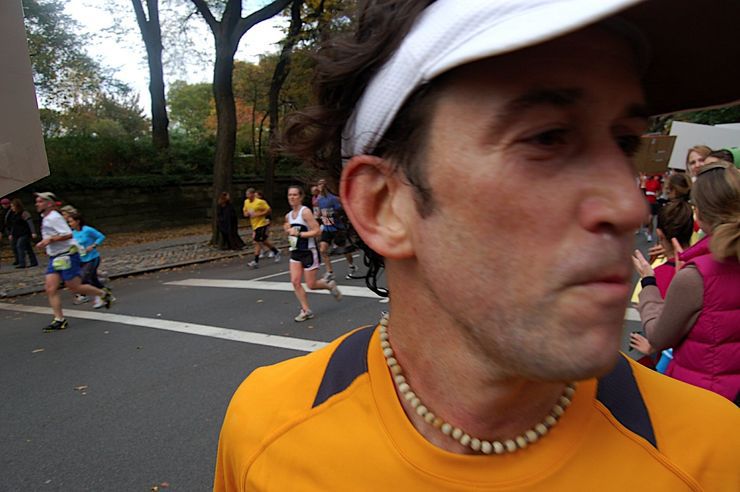 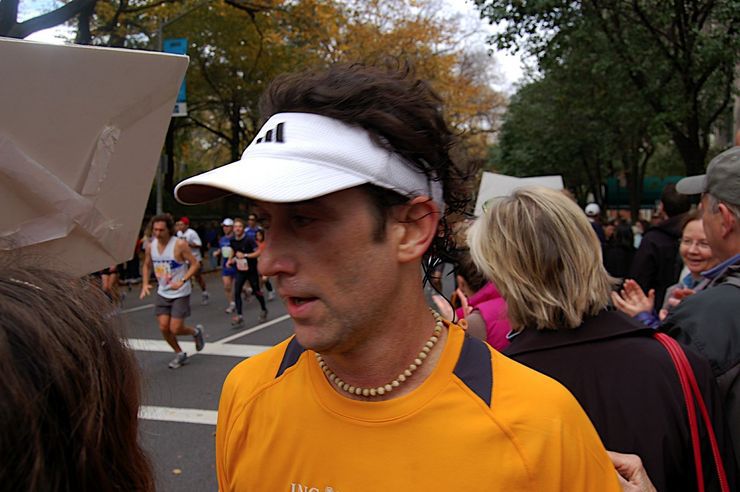 Two and a half miles to go. 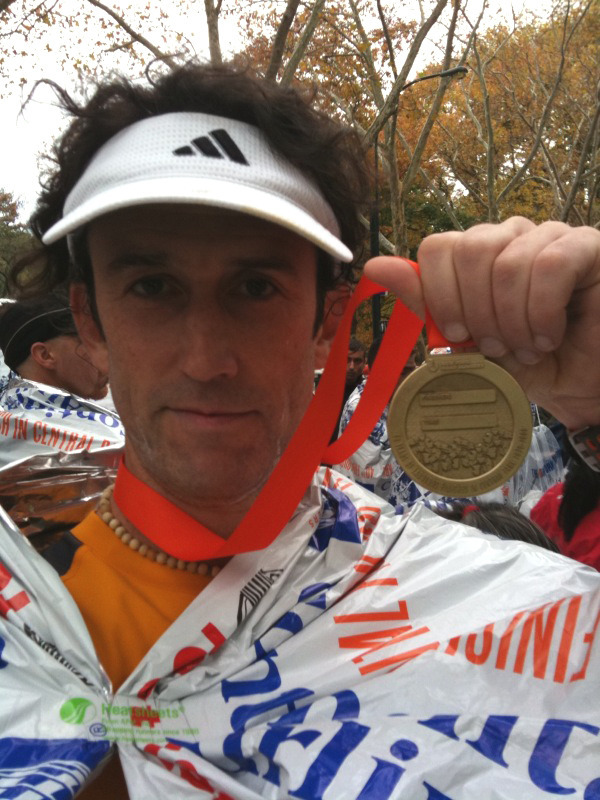 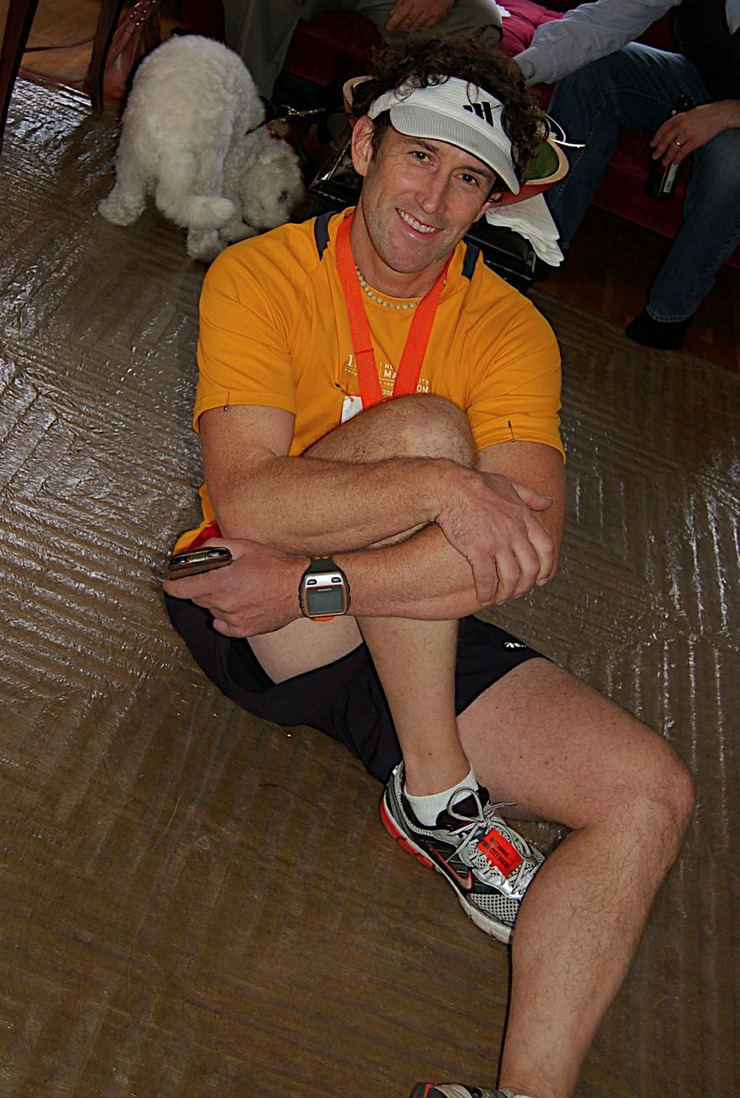