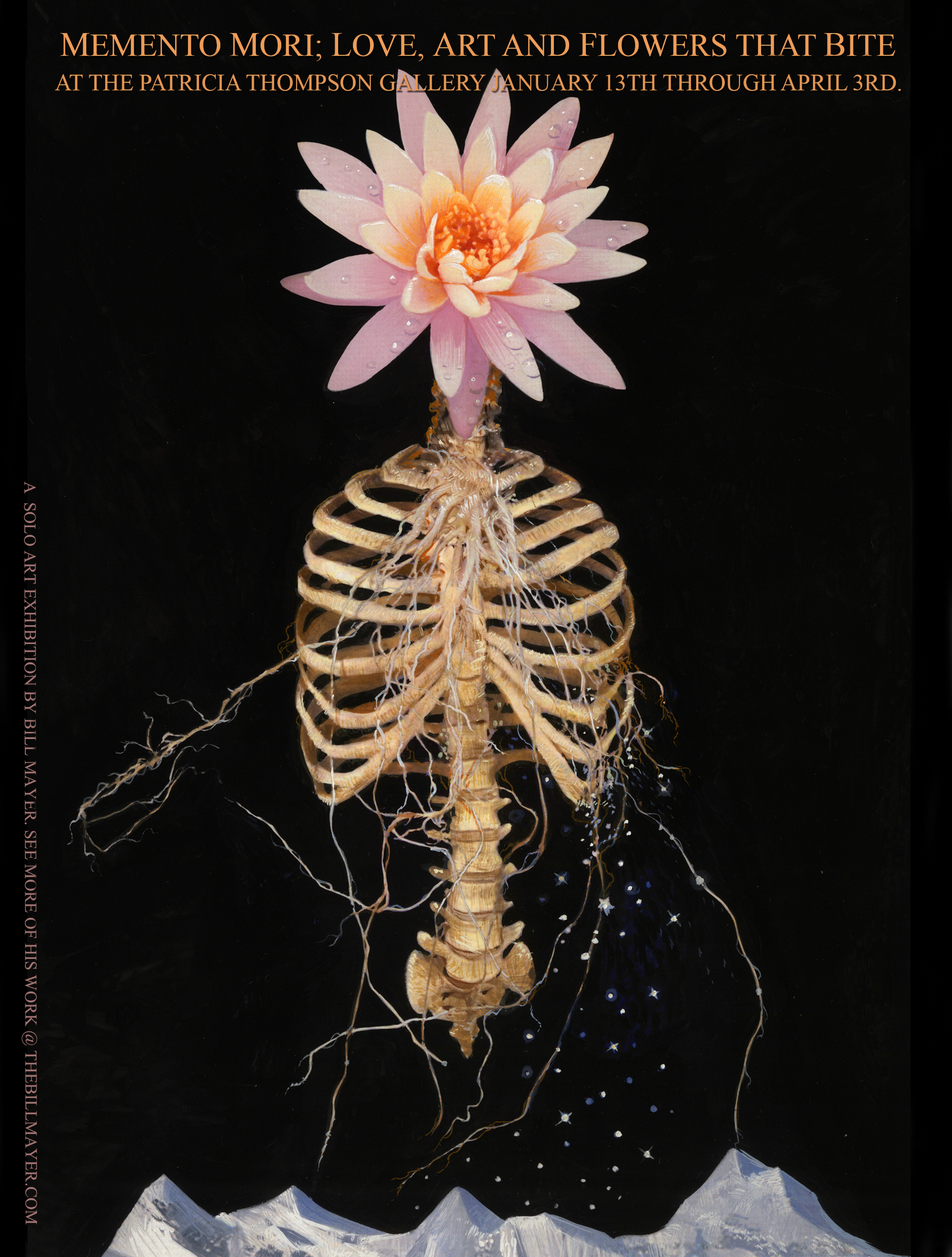 Memento Mori; Love, Art and Flowers that Bite...Bill Mayer curated by Tim Jaeger Will open in the Patricia Thompson Gallery At Ringling College of Art in Sarasota, Florida.Opening January 13th and will run through May 3.

I sit and listen for the clock to tick... There is only the sound of rain on the tin roof. A few birds chatting it up in the cedars, trying to stay dry. The coffee’s percolating a jazzy Latin beat...
First thing you should know is You Will Die; Knowing this I started out my last day with the fortitude of Hunter S Thompson...
Waking at 5:37, Sunrise at Calf Pasture.... Long ride up the point to the Presqu'ile Lighthouse...return to a couple pots of percolated coffee, four scrambled eggs, half pound of bacon, and a Dutch Baby; followed by a Bloody Mary, and a nice swim in the bay...
Another long trail ride up the point, through Jobe's woods, to Jobe's Lane, down the lake shore to the park store for a heaping scoop of morning ice cream... Sprint back to the cottage for another brisk swim... Repair deck chair... A little painting on the cabinet. Then a trip to the windy beach to see the Waddlings and a glass of the finest Canadian Rye... It smelled like dried grass and a horse barn... Paint cabinet, paint face, costume, Tequila, ...Calathumpian Parade!
Met our first new Neighbors in Eighty years... We all gather for dinner. Ontario corn, various casseroles all laced with Canadian cheese... Chicken smothered in Fox Brothers BBQ sauce, hot dogs, pecan pie, butter tarts, some jello thing (I have no idea)... after dinner, Bonfire. Fire hooping and spinning under the most incredible orange moon rising... I was told tonight that I don't eat like a pig, pigs chew their food.... I eat like a duck.... We gather around the fire and tell stories of Pondscoggins, Lunkerheads, and Banshees that steal children away in the night. 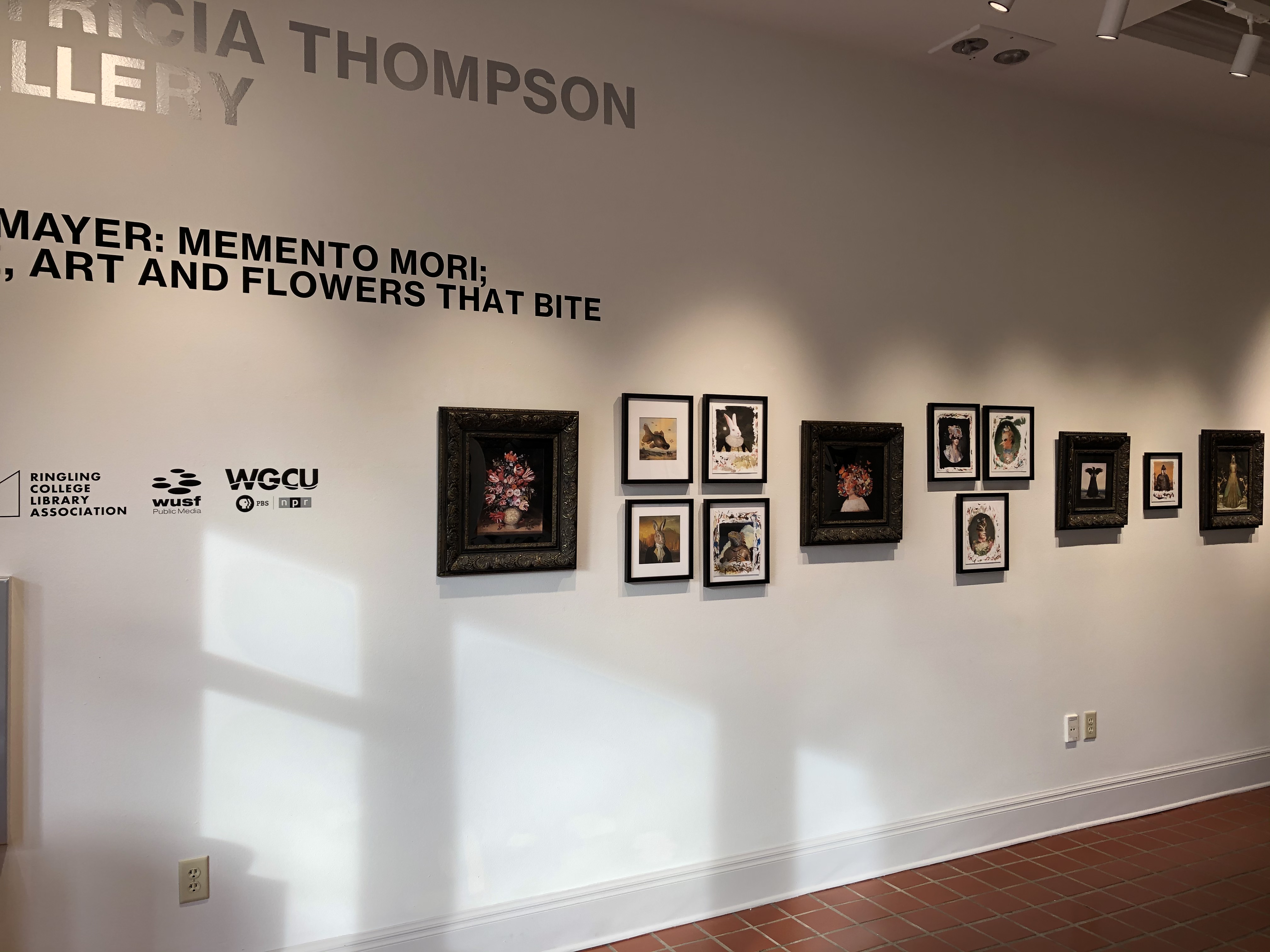 Tim Jaeger did a fabulous job putting everything together. We did have some differing opinions about the pieces being shown raw and un-cropped. My fear was that non-artists would not realize that the rough edges and splattered paint on the outside of paintings were just process, and think that it was part of the overall design of the piece. After talking with folks at the show I have to admit I was wrong. People loved seeing how I painted. I think it was a good compromise to show most of the work matted and framed properly. Leaving a few, they got a better grasp of how the painting were done. 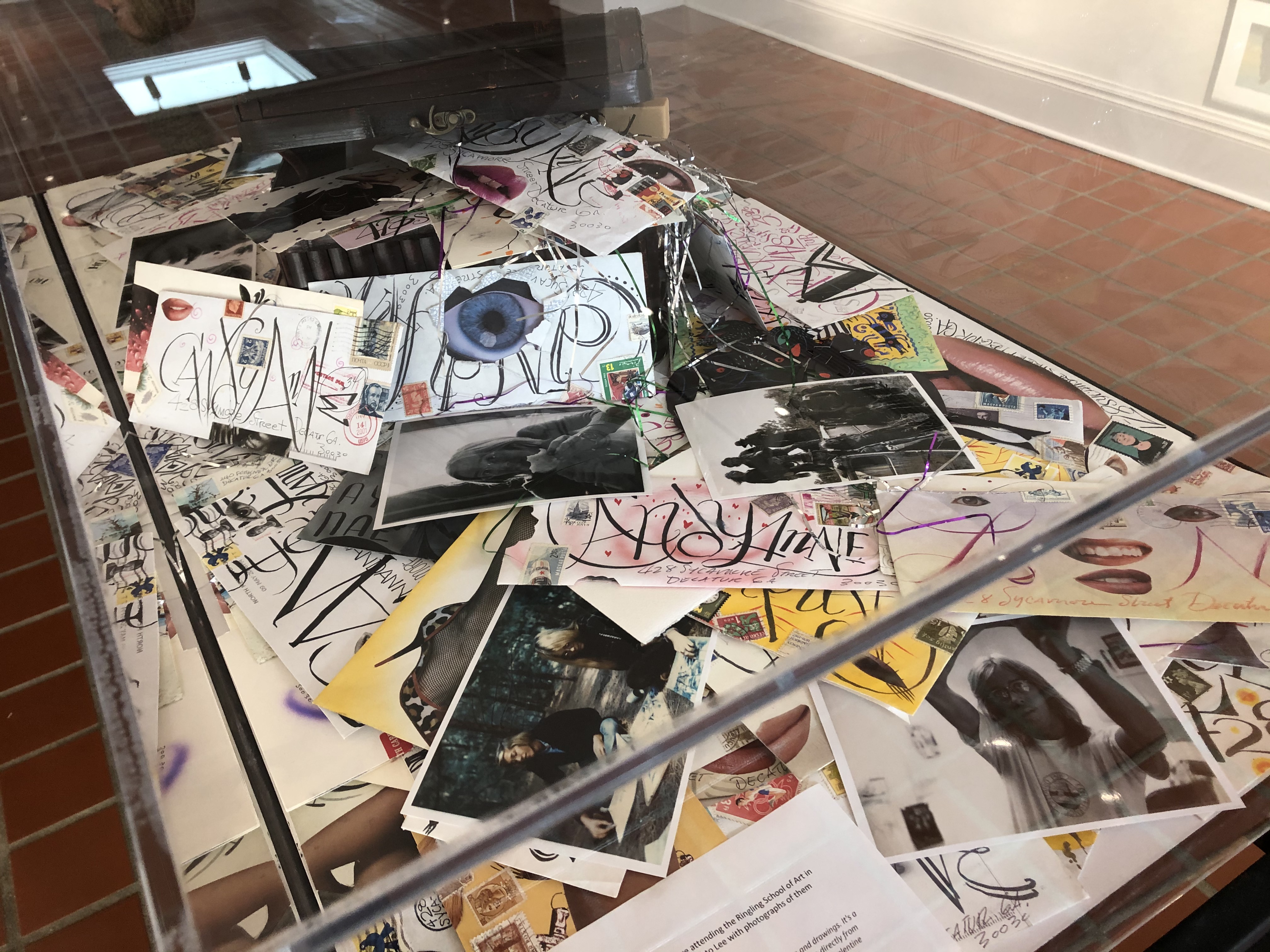 For years I've been sending letters to Lee... always decorated with collage, lettering and drawings. It's a wonder they make it through the mail at all. Im sure the origin of the stamp drawings came directly from these letters... a few years ago I decided to compile a bunch of the letters into an elaborate Valentines Day present for her, turned into, I think, an 86-foot-long accordion fold book. 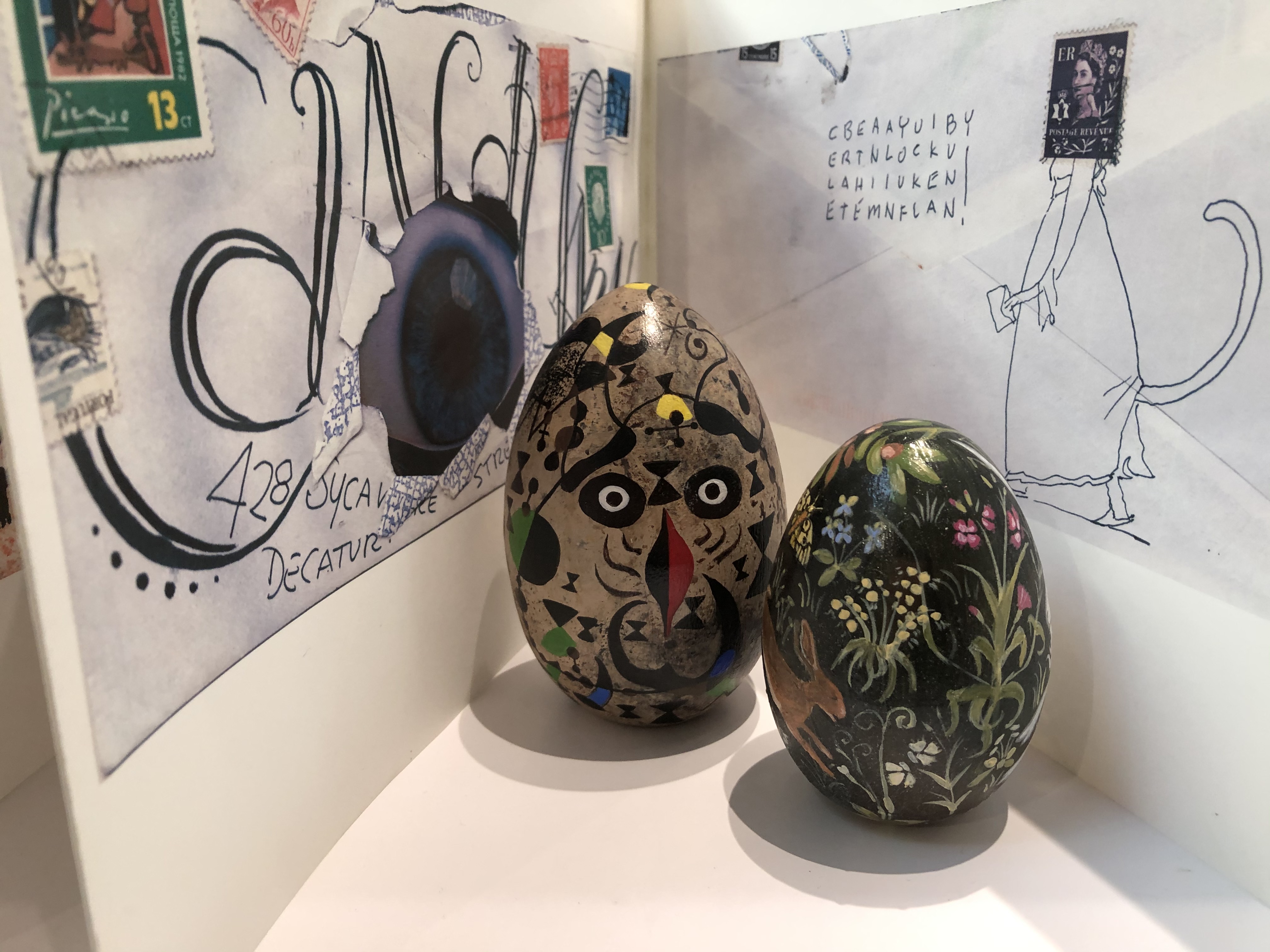 Painting miniatures comes from several sources. First; from "The Book of Hours" we saw in New York at the Morgan Library a few years back. Incredible little paintings and manuscripts done in medieval Europe in the early 1500's. Second; Some direct inspiration, from Lee's eggs that she paints me every year for Easter where she takes an artist she's found during the year and paints an elaborate egg using a rabbit, cleverly incorporated into them in some way... And third; it's a direct reflection of the way with view our world through social media, at 800 pixels by 72dpi. 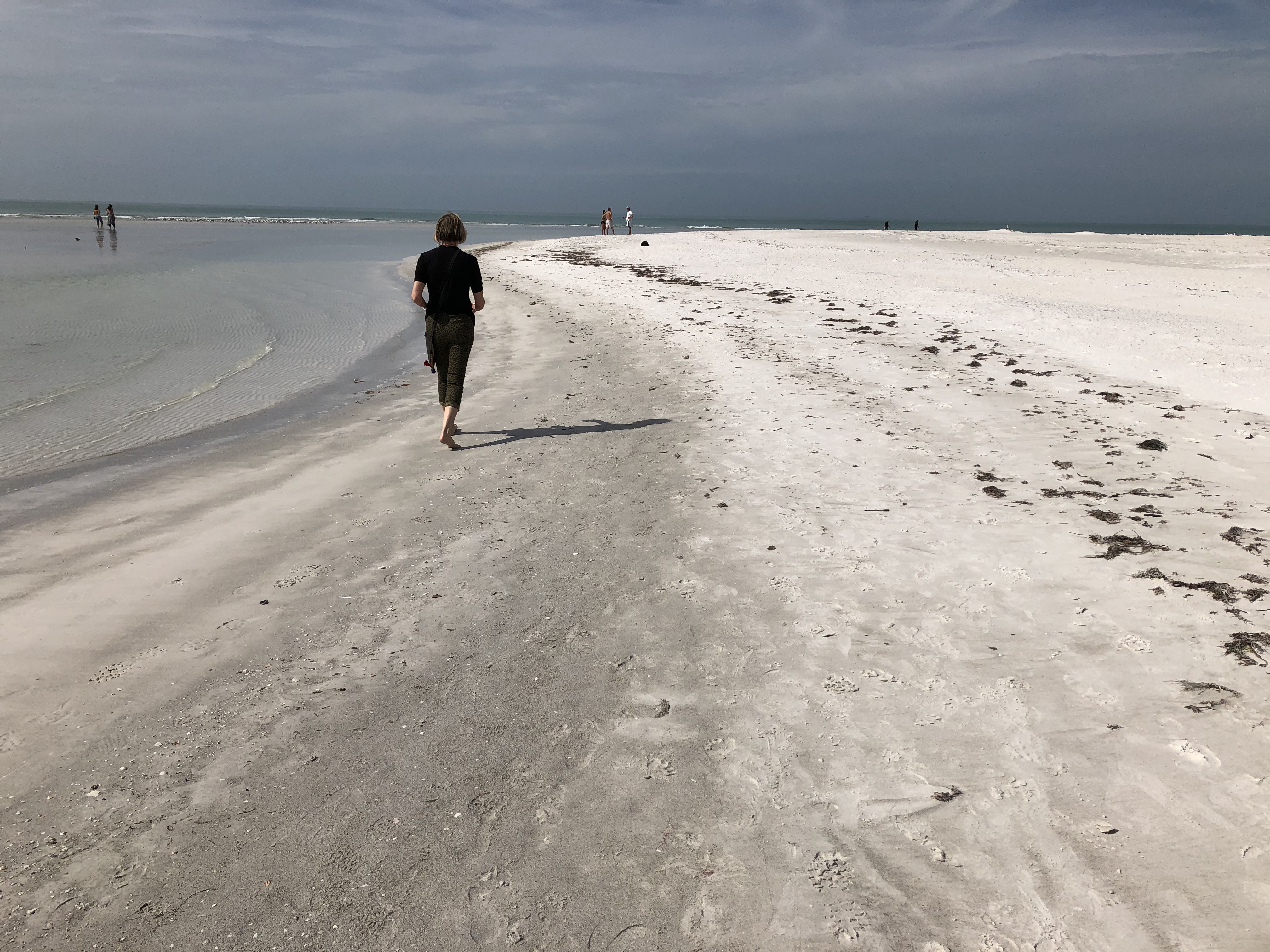 It was great going back to Sarasota. It's where Lee and I met fifty years ago. We had some time to show our grandson Forest and his now wife Victoria around the places we used to go. The Columbia where Lee and I had our first date. I guess, âformal date,â our first connection after meeting at a school dance was to meet up on Lido Beach. I had forgotten how beautiful the beaches were at Lido. âNorth Lido Beachâ (which we used to call âWash Outâ) was for the most part almost deserted. We walked in and out of the weaving Banyan Trees down to Ca' d'Zan, John and Mable Ringling's Home. It's spectacular. We did a running tour of the Circus museum and the fine art museum. It felt like we sprinted though the walls of Rubins, Rembrandts and Monet's. Ringling has be most extensive collection of Baroque and Rococo art outside of Italy and is probably best viewed at a less-than-jogging pace. 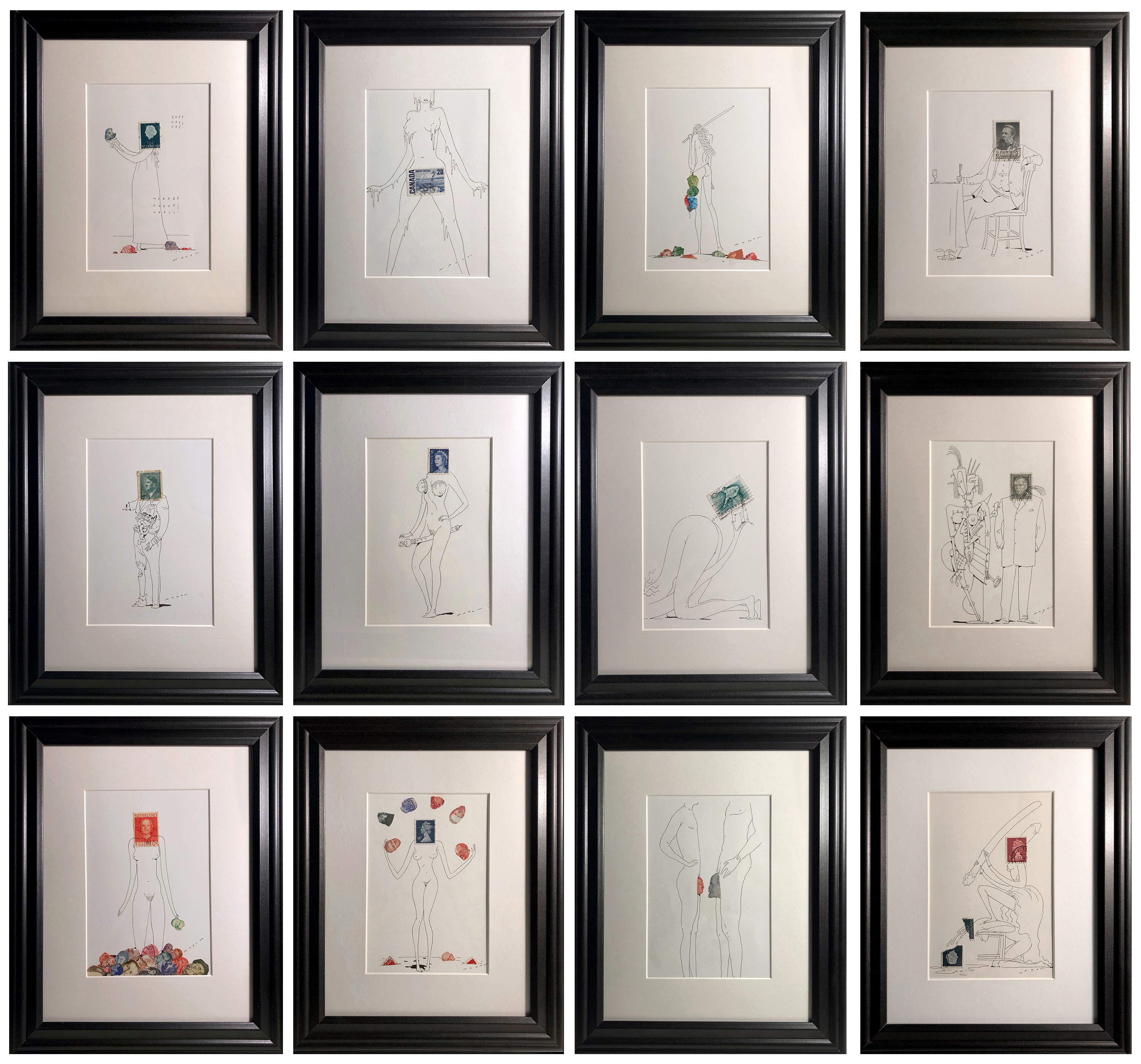 I had a few rainy weekends and Pretty much filled up a sketchbook full of new Stamp drawings. we thought would add some diversity and contrast to the tight gouache work. The stamp drawings I'm not really sure if there is a rational explanation behind these silly little drawings. I paste these stamps in my sketchbooks and draw over the top of them. I love the contrast of the beautiful craftsmanship and stoic nature of the stamp, and the playful, graffiti-like gesture of absurdity. They make me smile. 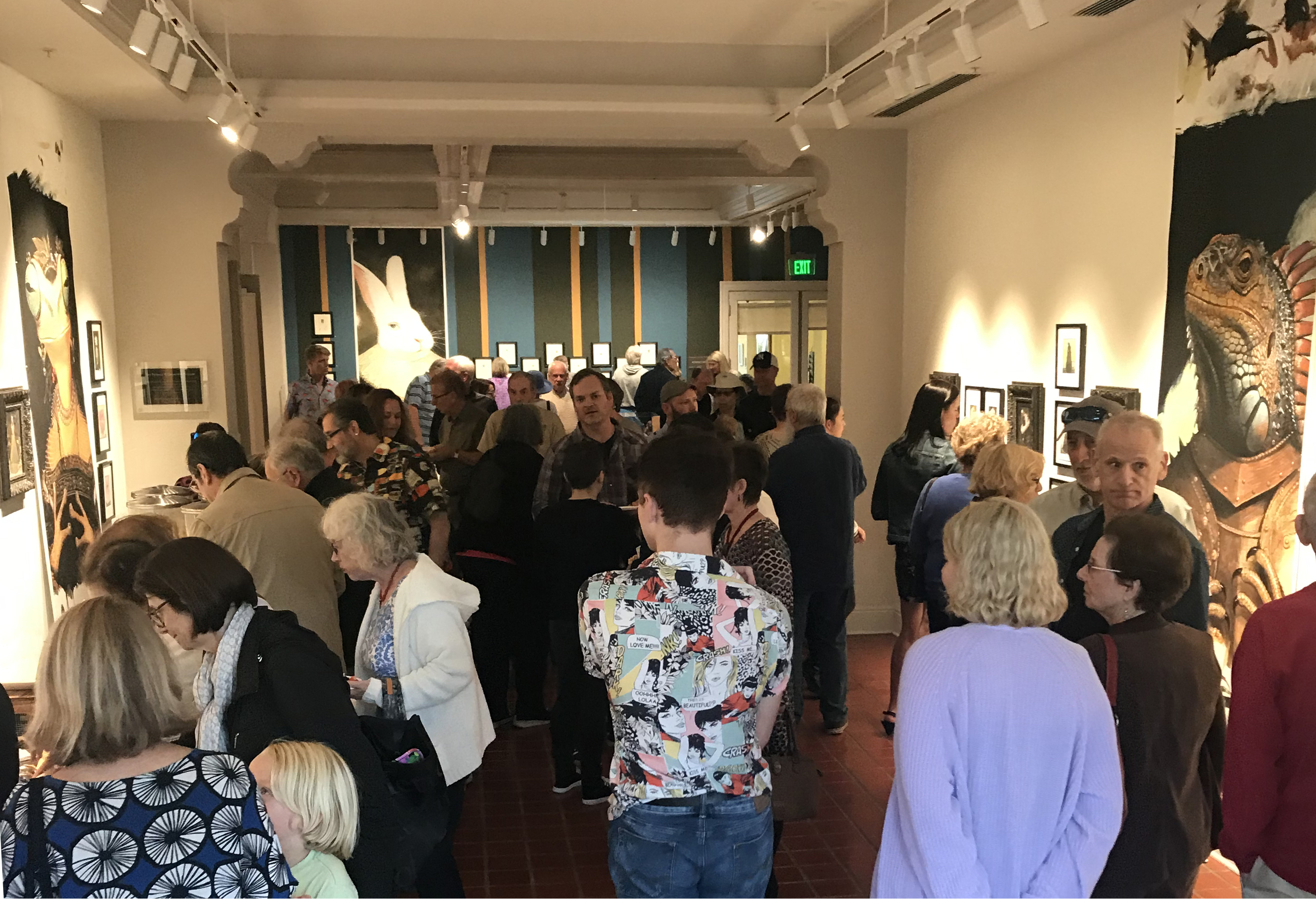 It is so against my nature to be out in front of people. It felt like Dracula being dragged out into the sunlight, like I should be lying on the floor screaming... 460 people crammed that little space, I think mostly for cheese and crackers and a few grapes but they got to see some art...and exposure is good... A huge thanks to Tim Jaeger, Zak, Natalie, everyone at Ringling who honored me by doing this show. Tim did a fabulous job showcasing and displaying the paintings...such a fun fun time. A big thanks to all our friends old and new who made the drive here to see the show...Forest,Victoria,Skip and Wendy, Who brought Jane and Lee's 94 year old Mom. Bob and Dianne Brown who made the trek down from Wacross Ga. Allen and Maria Turk who drove 12 hours in traffic from ATLANTA...Candy and Steve Maxfield! What a great surprise... Debra Matheson Hedgecock and Jenifer who made the drive from Orlando.Bernie and FranÃ§oise Wackenhut who drove up from Miami! Roger and Tricia Weber Meier for flying all they way down from New York! So great to see you all.
Latest
The Long Haul "Lucid Dreams" Opening at Copro Gallery curated by Beautifully Bizarre Magazine Hamilton King Award 2021 ORPHAN BARREL New little spot illustration CIO Momento Mori Warrior Queens 50th Anniversary MLK AIRBNB A VERY GRIMM TRIP THROUGH NORTHERN GERMANY Sierra Magazine: Bears and Animal Cognition
Topics
Topics
JUST WORK SKETCHBOOK THE LAB THEMS POKEMONS IS DEVILS
Archive
Image Galleries
New Gouache Drawings Staying Sharp Sketchbook Letters to Lee Stamp Drawings Typoglycemic Recent Work Flat Work Demented Little Beasties portfolio 2 BEBO PART ONE General Orders No.9 Portfolio 1 PEST PLANET For the love of a good line
© 2022 Bill Mayer