The Prodigal Son Returns- In the Company of Marines- Part 1 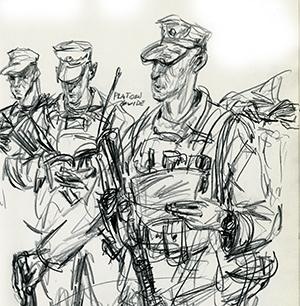 
When I first became a member of Drawger it seemed every illustration assignment created another opportunity to write about process and maybe even throw in some personal observations. The postings were labors of love, with writing that was edited and reedited till the last second before hitting that ‘publish’ prompt, and even so I’d return a dozen times to continue tweaking the sentences. These were the days before I fell under the evil spell of Facebook, where everything was in real time and your work posted and disappeared before it could even receive a decent digestion. Everything in real time and with the retention factor of a passing thought. Lots of shiny objects and less reflection. Friends would post my latest assignments on my page before I’d even have a chance to write some commentary and everything turned into a weird game of never catch up with the following day making sure that everything in the last 24 hours had become old news. Most of the time you’d find yourself simply throwing something new on the timeline because, well, you just had to.  Out of sight…

Drawger wound up becoming a distant second concern as all concentration focused on keeping up with the instant and maybe even staying a step or two ahead of it. My 2016 Drawger entries dwindled to nothing even as pointless Fb political debates increased exponentially.

So, having gotten that off my chest, here’s a post about work special to me. I hope to return to a more active roll in posting process pieces here.


Back in 2014, Col. Craig Streeter, a Marine combat artist, invited a small group of war artists, to accompany him on a drawing mission to Quantico, Virginia, to draw officer training under live fire conditions. Colonel Streeter was very fired up about the art program and had serious plans of invigorating the visual documentation that has been such a core part of the Marines’ heritage. We were there for a couple days and the experience produced some fine drawings and even a painting from me. More importantly, it laid the groundwork for a friendship and mutual support that has continued to this day. His enthusiasm was palpable and we would compare notes on our drawings over the course of those days and he genuinely appreciated whatever feedback I gave him on his work. For me it was another prime opportunity to practice being fast under constantly fluid circumstances. While it was live fire training, it was not actual combat live fire, which allowed me the luxury of not having to worry about getting killed (provided I stay out of the way of the bullets) and instead focus on the number of opportunities to find the right place to be as the lieutenants repeated their exercises. Classic trial and error, and adaptation. These were not portraits. The emphasis was on action and narrative and since the teams were all taking turns performing the same exercises it was not essential to finish a drawing of one specific group but patiently and methodically add new figures to the drawing already in progress. The camera was always handy and plenty of photos and videos were shot for reference backup. As usual, there were many false starts and plenty of unfinished drawings; my sense of security in my marks ebbed and flowed, happily favoring the flowing for much of those two days. There were times I speculated how effectively I would capture a scene in an actual combat situation keeping up with the constant movement. What would I do different? It was one thing to be sitting in the back of a Black Hawk helicopter drawing action in its confined space. But racing over a field presents starkly different challenges.

Accompanying Colonel Streeter, the small group of artists consisted of myself, former Marine combat artist Mike Fay, and the very experienced war artist Richard Johnson, a veteran of many long term embeds. We all had our ways of approaching the visuals and what we concentrated on. The Colonel was trying to loosen up and I offered, when asked, some observations on letting the marks fly and not concerning oneself with exact proportions. It wasn’t about being right, but about telling the story.

There were a handful of times when the Marines were assembled in between exercises and these presented opportunities to draw the groupings taking a knee, telling stories and finally sitting down. At other points, the groups would be off with their leaders receiving instructions during the briefs while studying the next maneuvers scratched and constructed with careful detail in the ground.

Initially, on the first morning, we artists were observed with a kind of bemused and maybe even confused suspicion. People showing up with cameras or video gear is common; people arriving with pads, pens and pencils is off the beaten track. It’s a reaction I’ve noted often. There’s a curiosity that gets triggered watching someone draw, and in the case of these lieutenants in training the drawings were of them. By the time we returned from our lunch break the word was out and the conversations were audible enough. We were the artists doing these cool drawings. Marines would collect around and ask to look. Then the questions would start with the familiar openers, “Why you doing this?”, “Who are these drawings for?”.  Young warriors handling the most sophisticated weaponry dazzled by lines on paper.

Many of my drawings and a painting done in studio from the Quantico experience, as well as a book of portraits done on location at Brooks Medical Center in San Antonio, in 2013,  of wounded Marines, were presented to the National Museum of the Marine Corps in early February this year. They’ll go through a formal vetting process. It’s an honor to contribute to the history of visual documentation of the Corps. 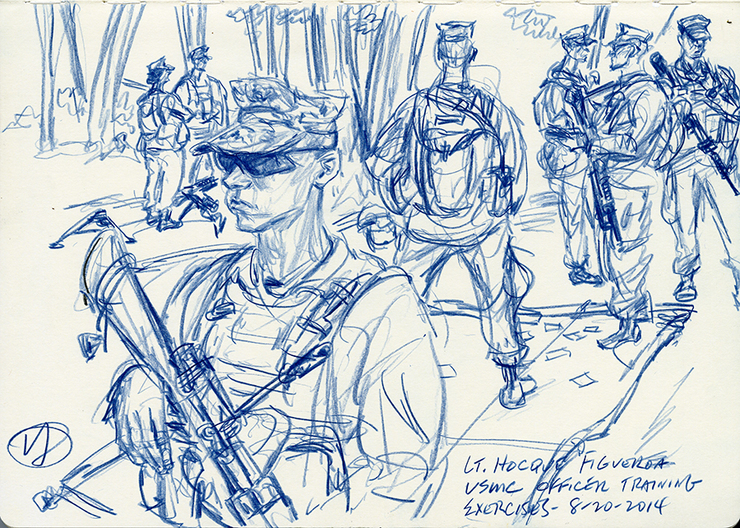 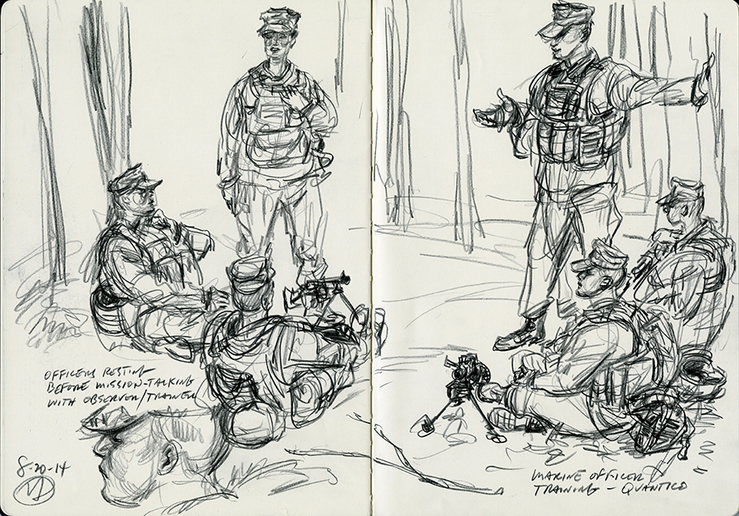 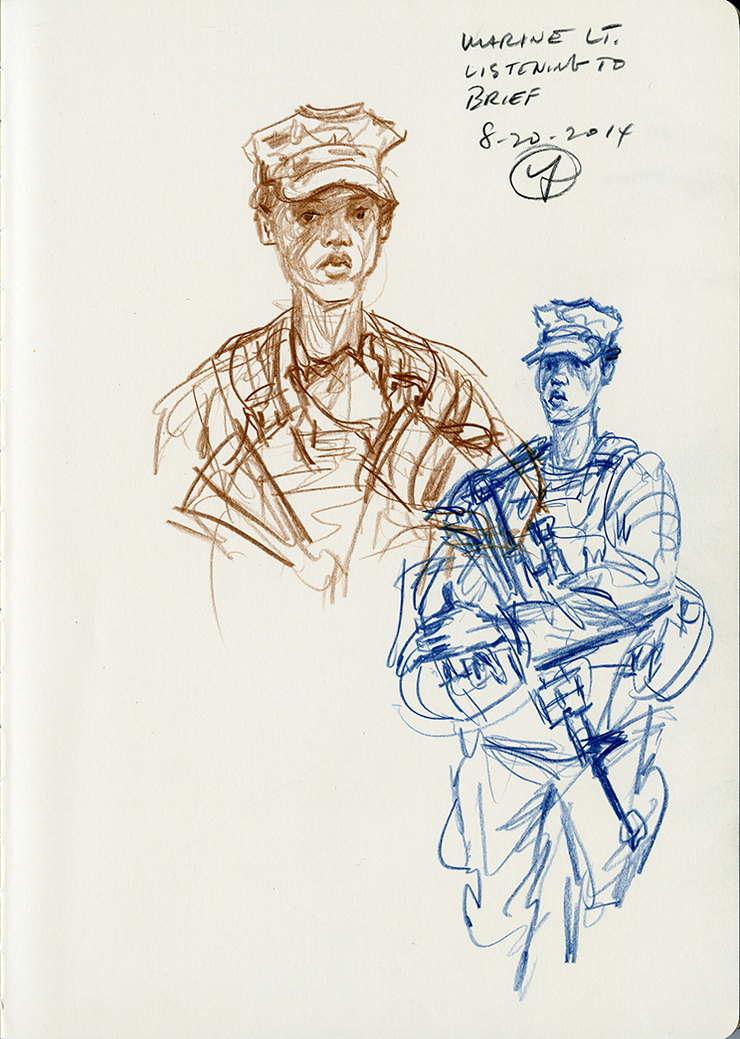 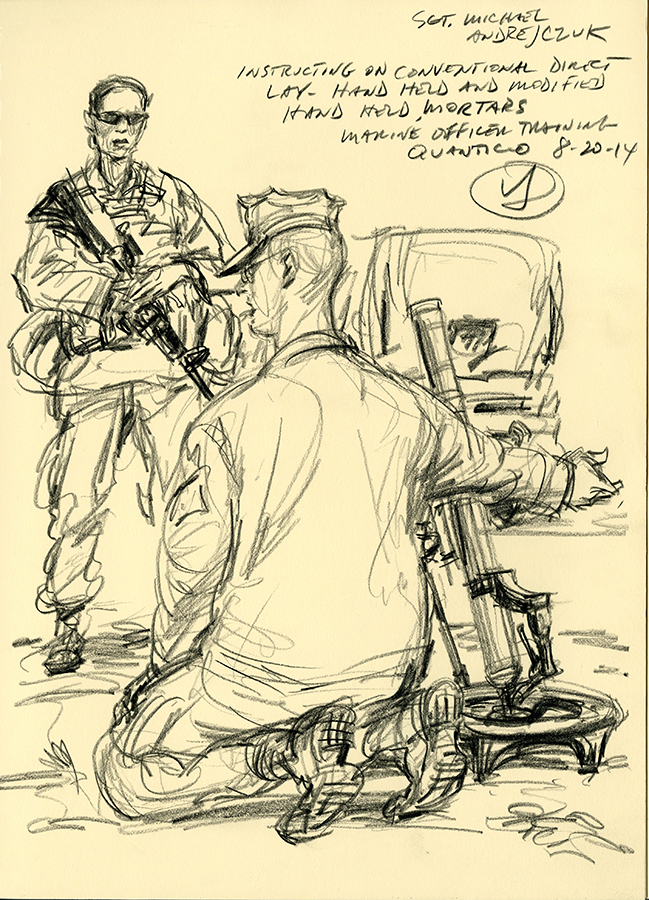 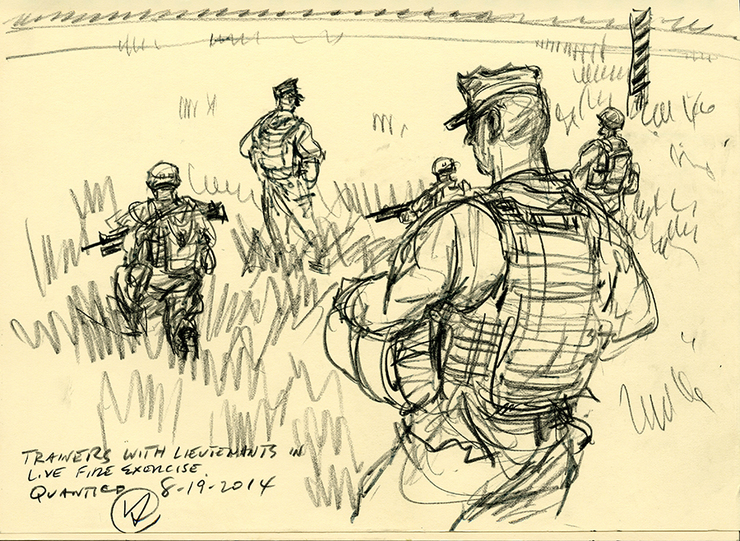 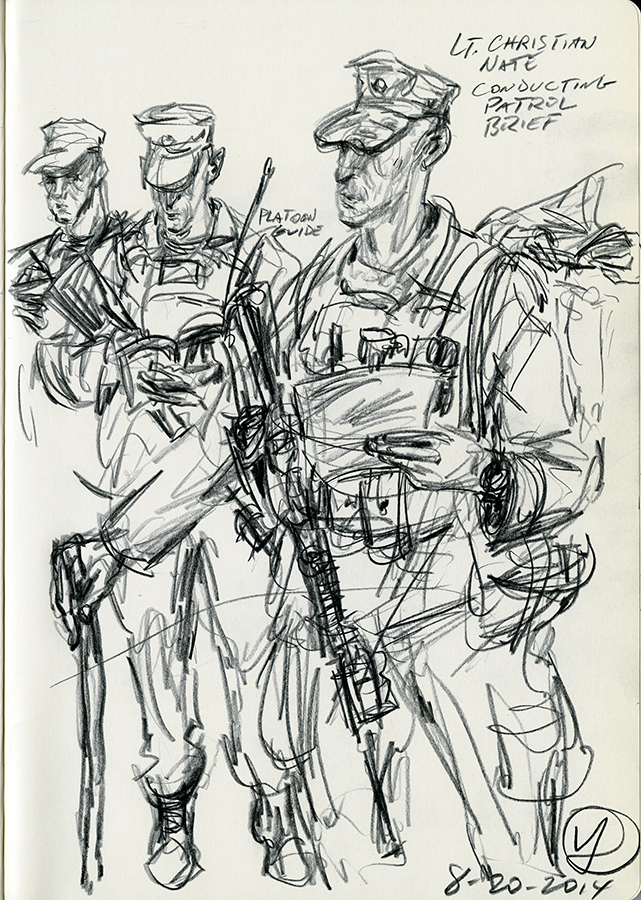 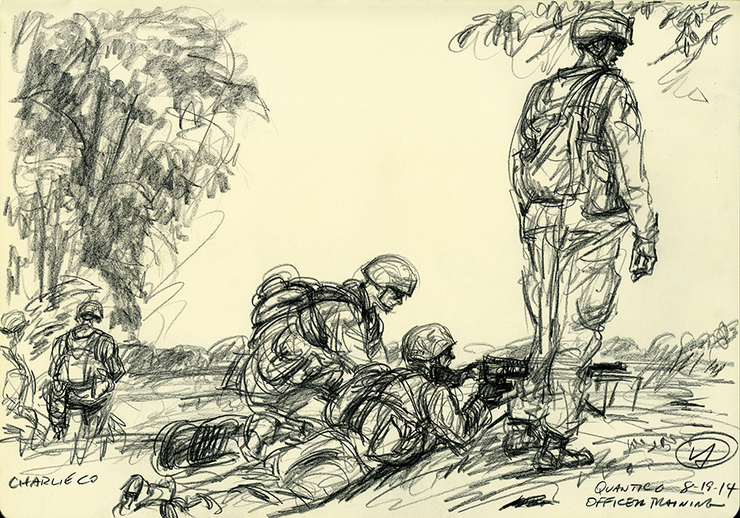 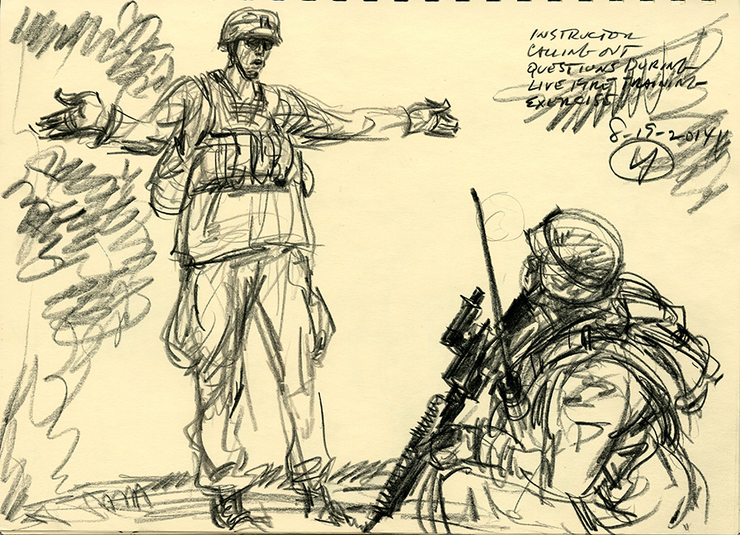 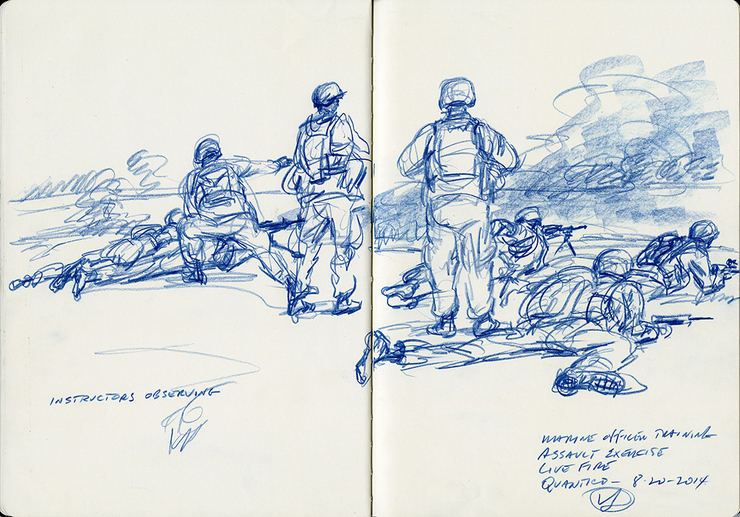 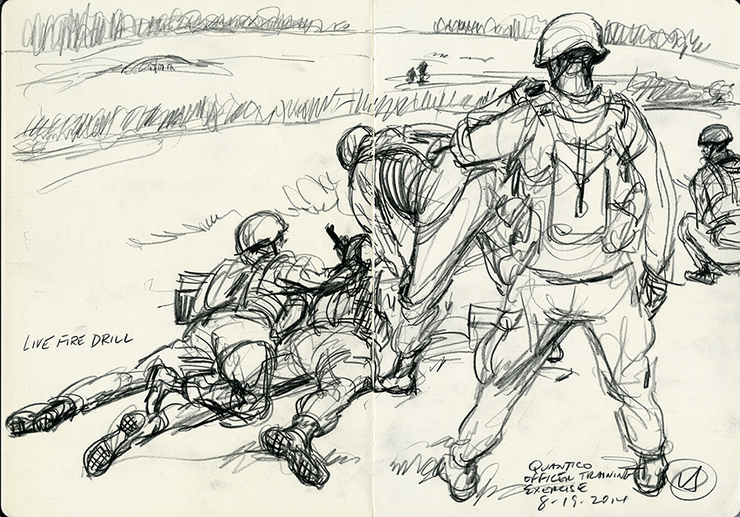 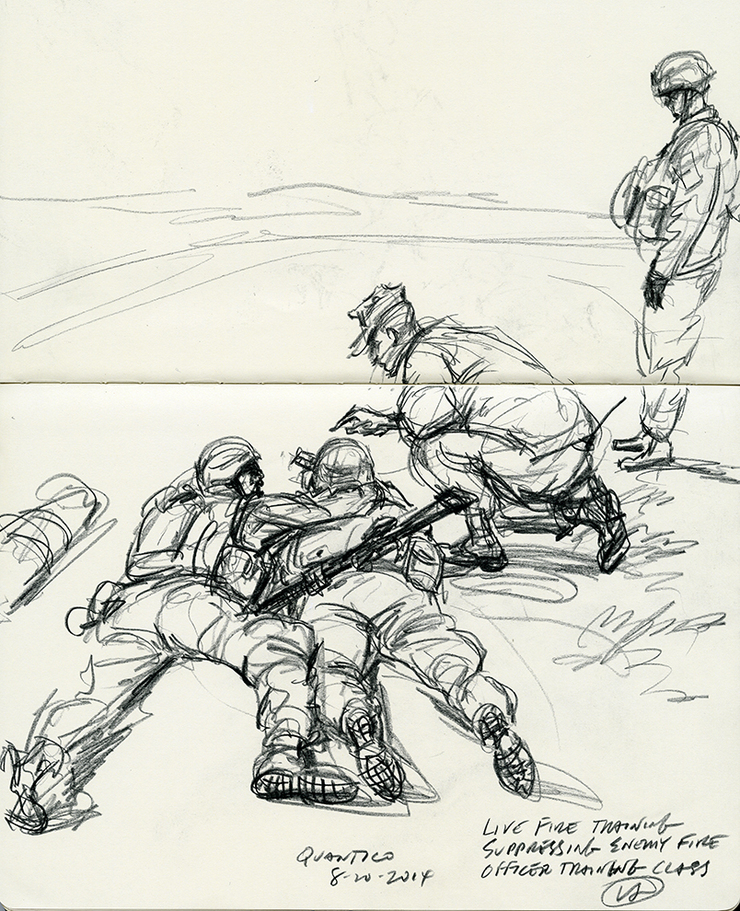 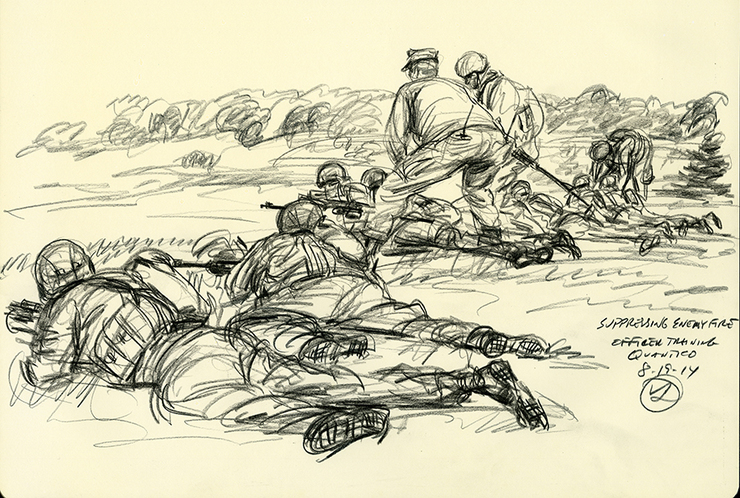 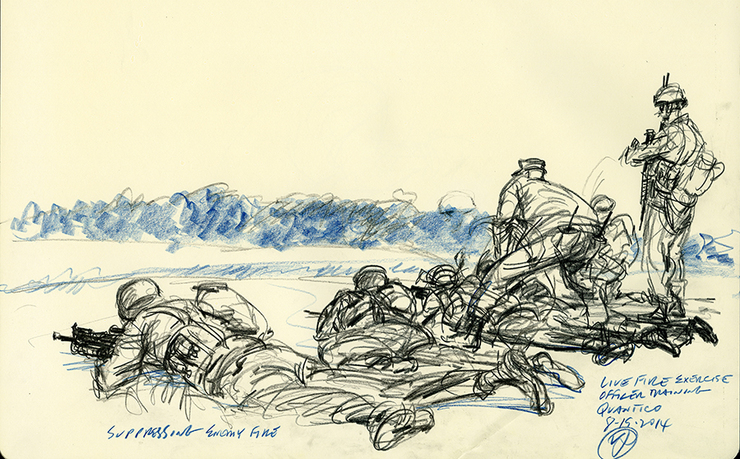 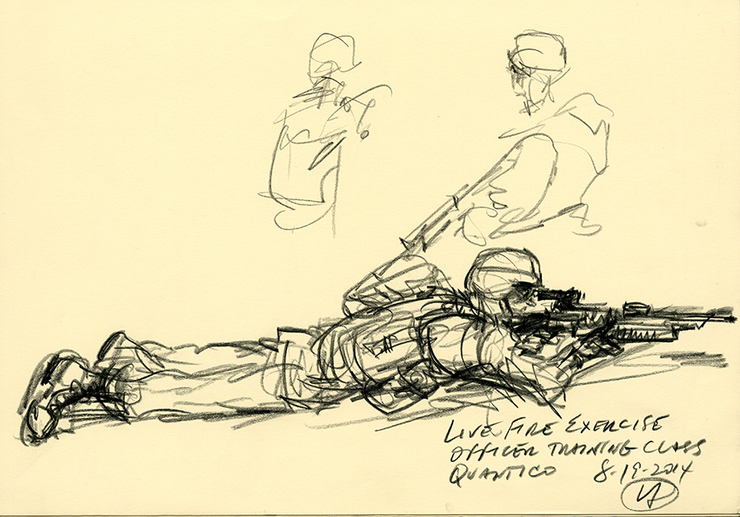 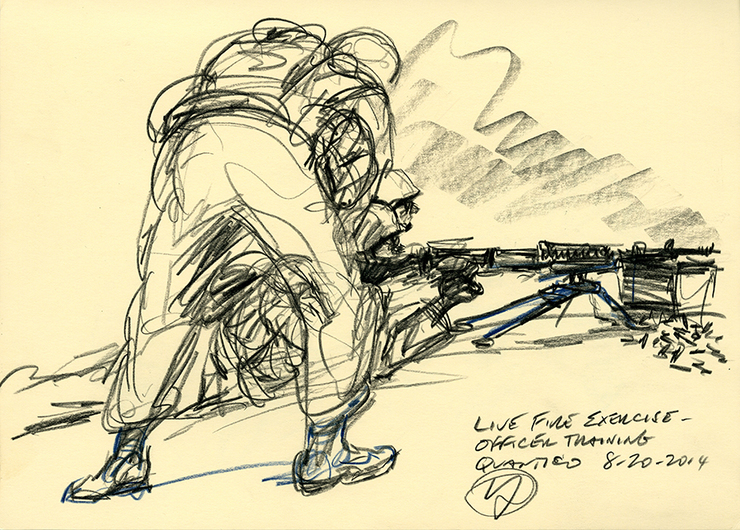 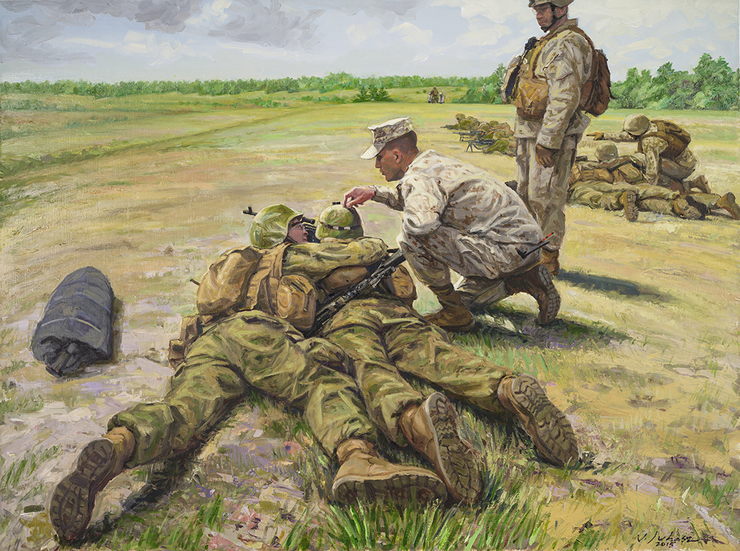