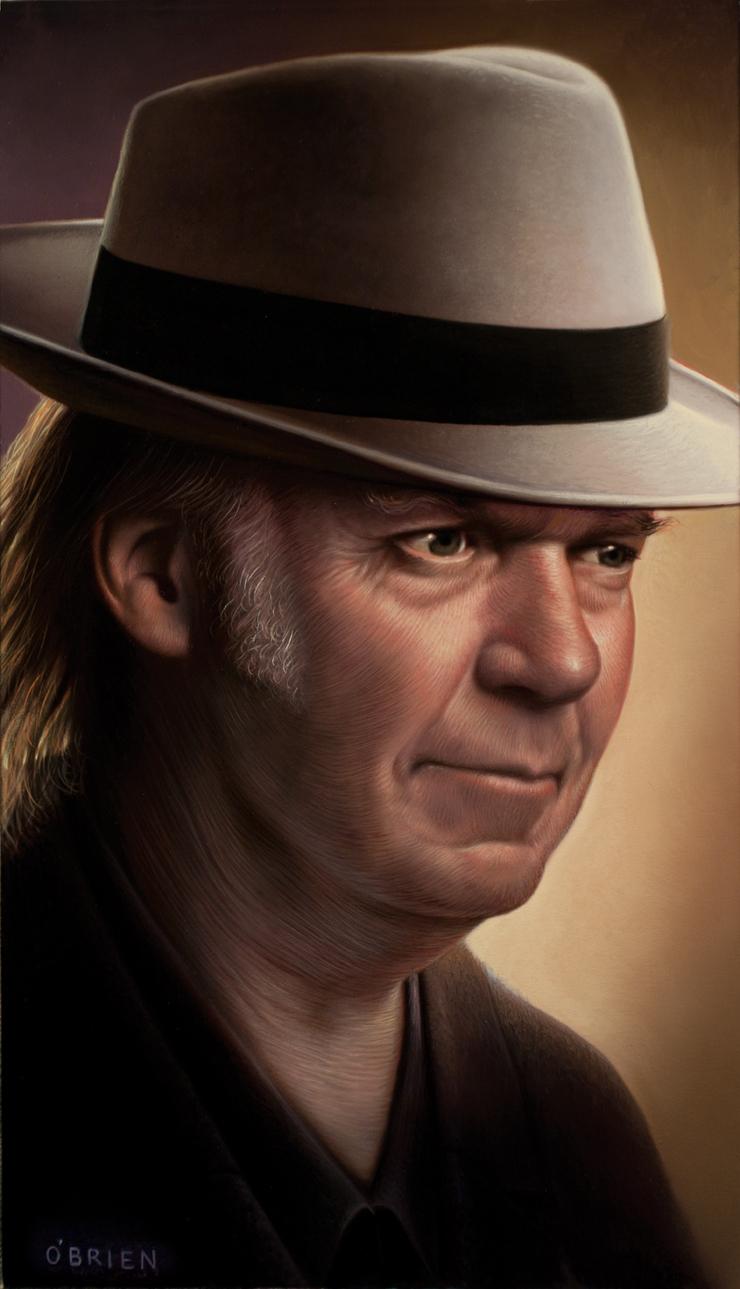 I'm late to the game with Neil Young.  In high school I felt he was the favorite of the stoners, along with Floyd and the Doors so I stayed away.  As I continued my education both artistically and musically, I grew to understand and appreciate Neil Young and his amazing catalog and raw energy.  My love of loud, hard rock now shared room with softer, more thoughtful music.
Several of his songs get to me deeply and recently I shared one with Cassius.  It was officially a 'Harvest Moon' a few nights ago and he and I went for a walk in the direction of the large full moon listening to Harvest Moon.  It was a sweet moment and that song will now crush me forever.

Young's fragile voice that carefully plows ahead to me is his most touching and effective talent.
Recently I was asked by Rolling Stone to paint his portrait for a record review for "Le Noise."  It is produced by Daniel Lanois.   Below I have a link of Daniel talking about working with Young… 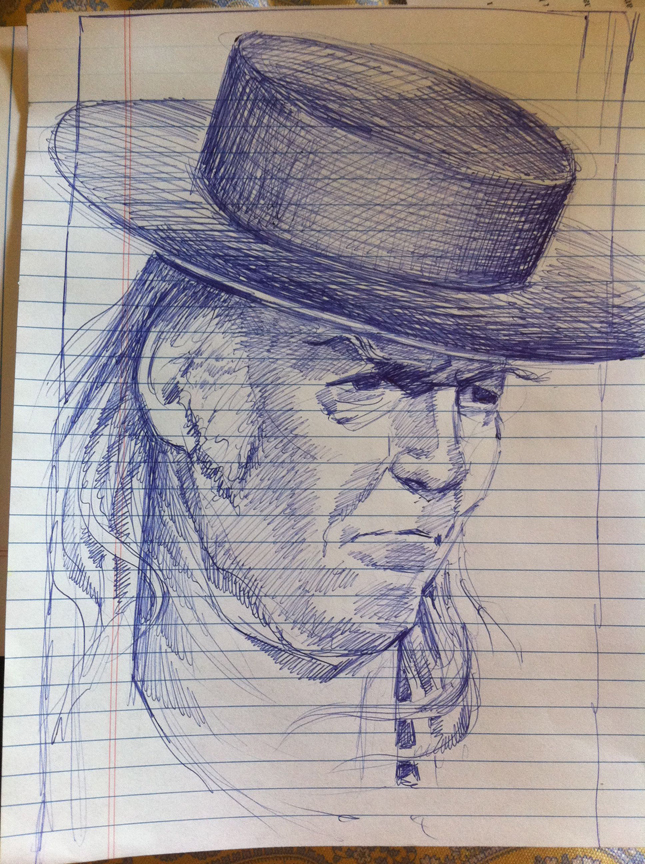 At first I was excited because I thought I was going to get to illustrate him in this cool flat, wide-brimmed black hat, but that changed later.  Recently he had been seen sporting a different hat which I added in the final.  I did my rough on a piece of notebook paper with a ballpoint pen on vacation.  Inspired by that, I moved to watercolor and pen and ink. 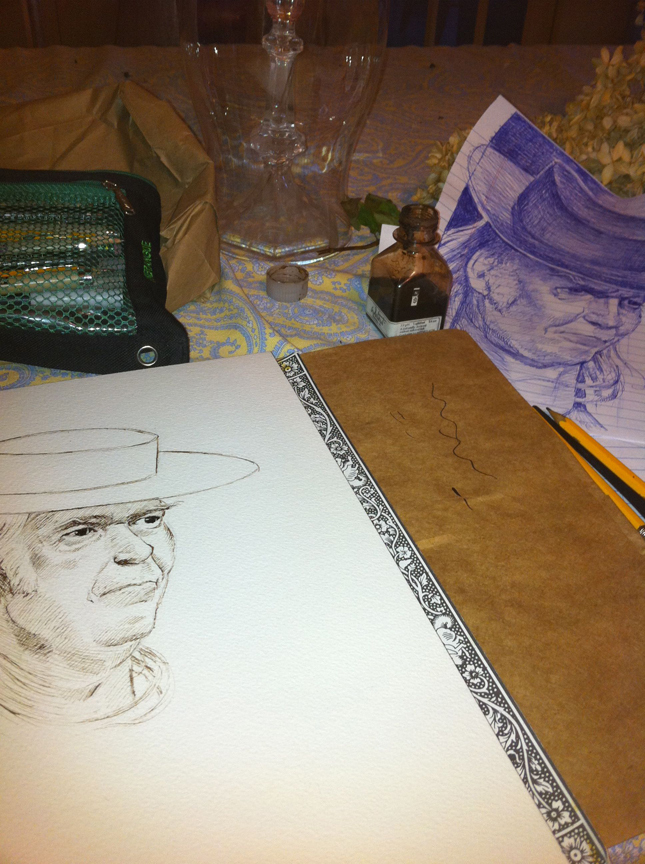 This is my preferred medium for vacation painting and though an assignment, I gave it a shot.  It's fun to investigate things that way and not be nailed down so specifically yet.  I filmed a bit of me working on this drawing.  At one point you can hear a door slam and see that my niece, Ella Rose had entered the room.  She then has a funny exchange with me.  Kids ask great questions and get you to be honest, don't they? 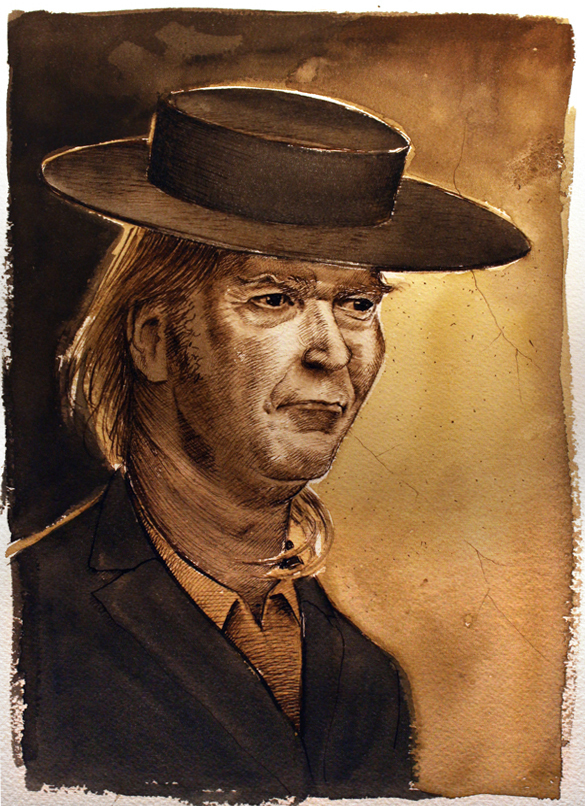 I don't think I ended up sending this exact sketch but altered it a bit in Photoshop to show how my finish would look.  I did like his tangly hair in my roughs but upon closer examination his hair is much shorter now so I abandoned it.  My sketches are more like portraits of Neil Young as I think of him, not of Neil Young for his new album, Le Noise. 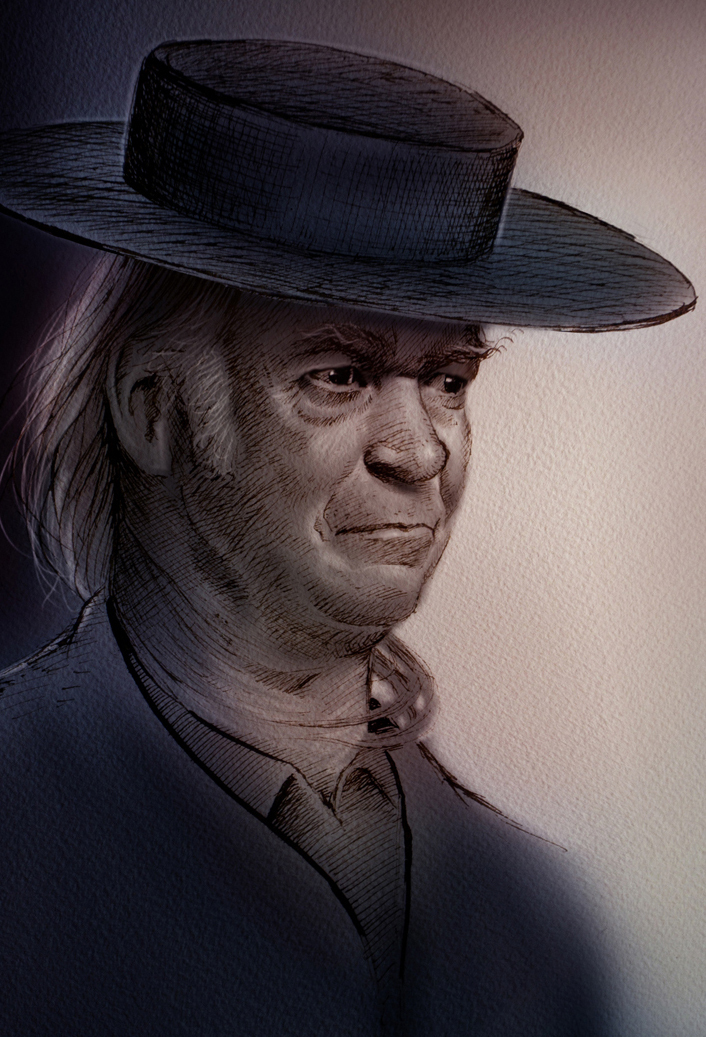 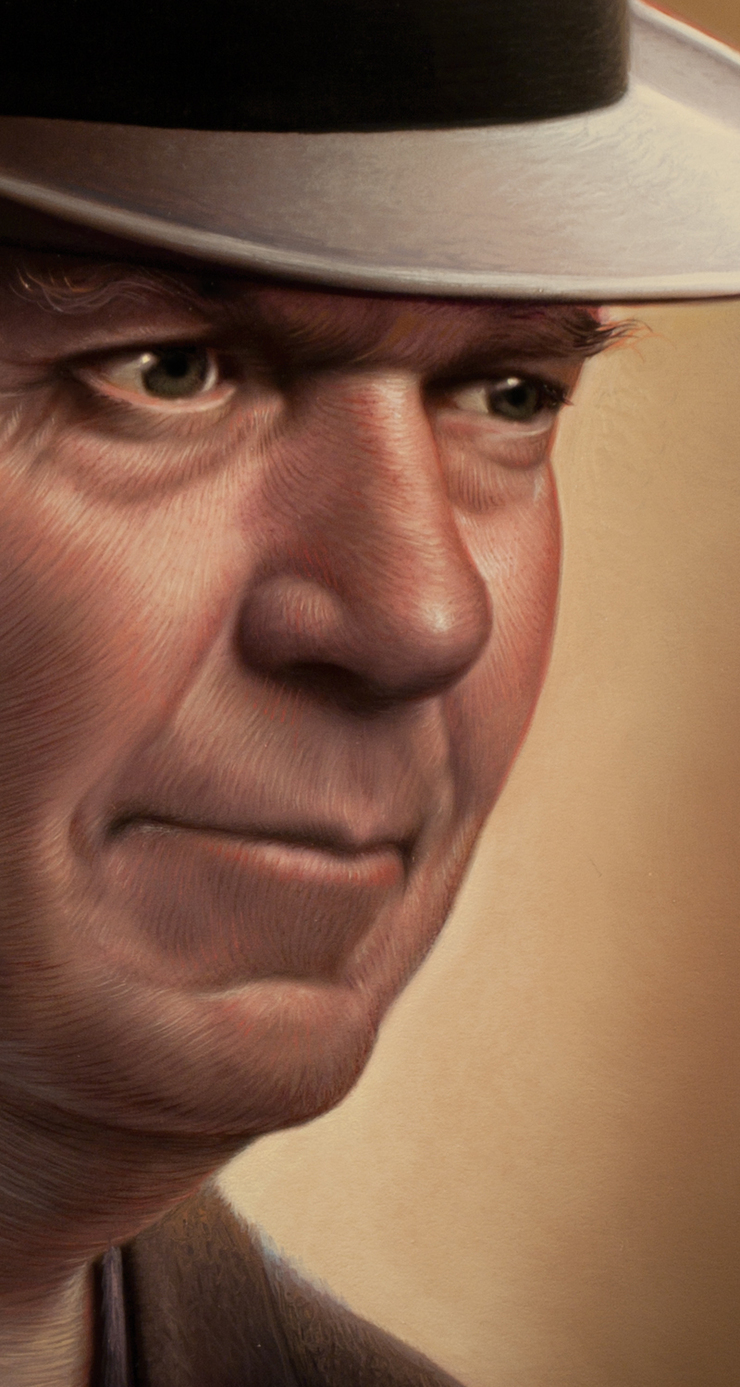 Someday I want to be paid by the brushstroke. This is actually a great shot of how I see a painting as I'm doing it. I work like a pointillist actually, changing the color of an area by putting other colors over it. A hot area can be cooled off with blue and a cool area can come back to life with some red. 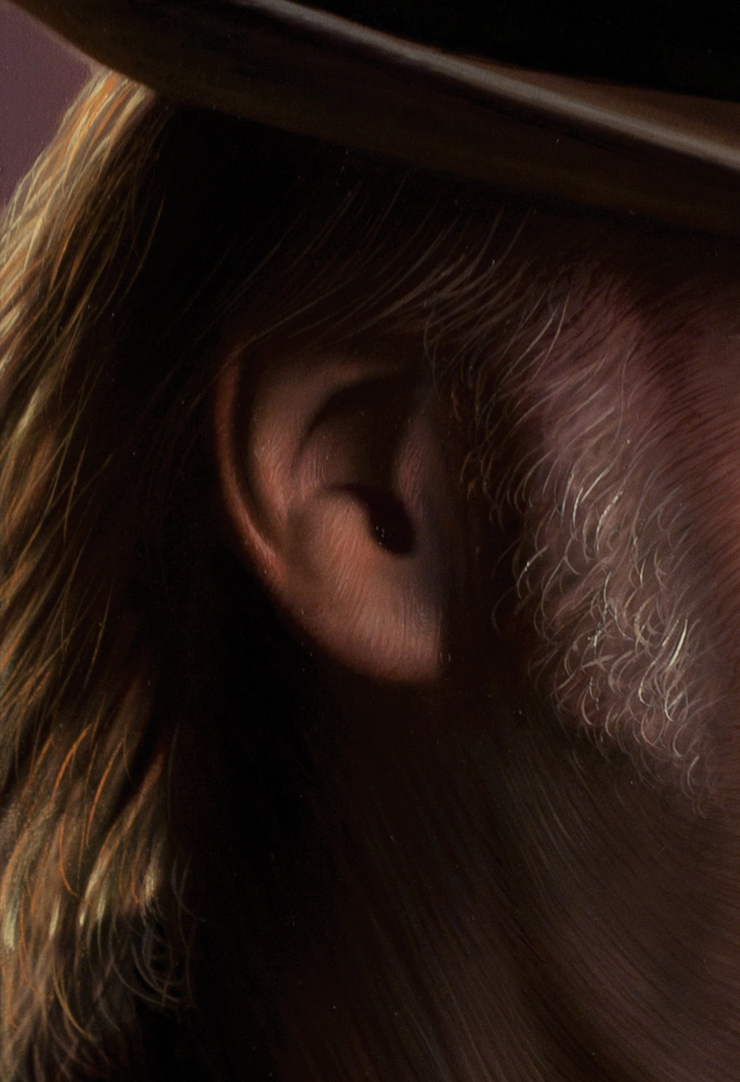 In the end though, couldn't this be the portrait of Neil Young? It says it all.


This last clip is for my dear son, Cassius. 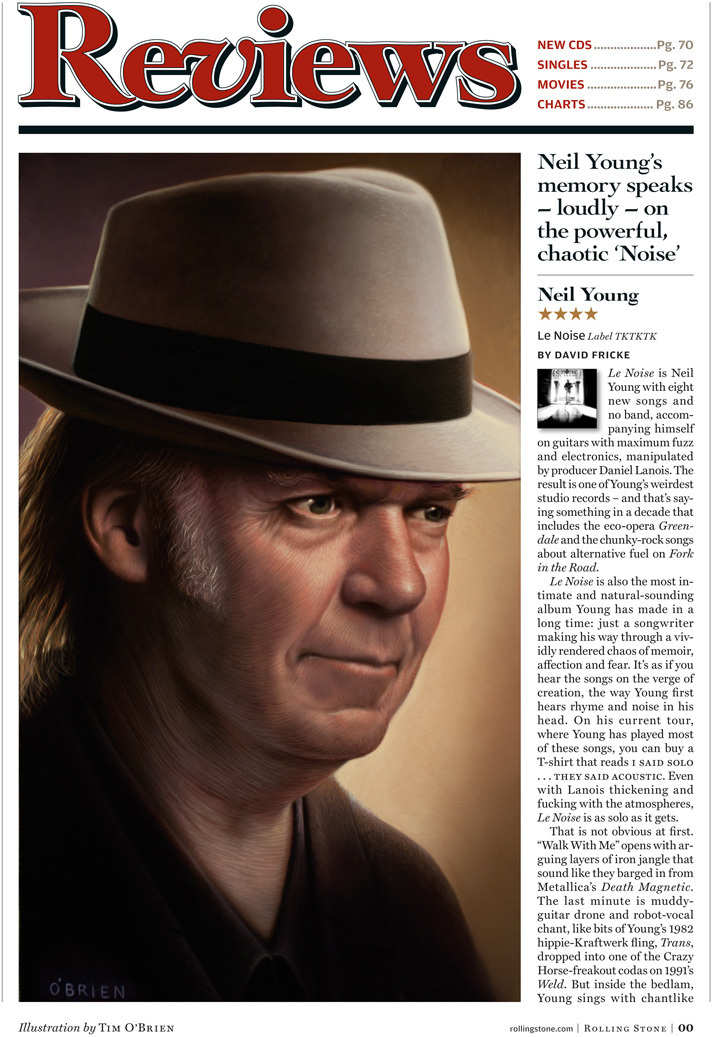