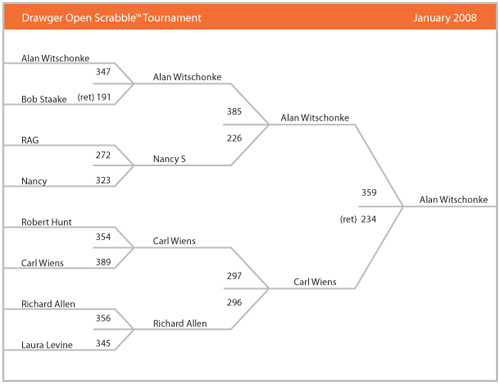 Updated draw (2/4/08) .
Here is the draw for the First (and maybe only) Drawger Open Scrabble Tournament.

There was no magic formula in selecting the positions for the line up. I went by who responded first and when Zina decided not to play, put Alan in her spot.

The top person of each pair will start the game. Specify TWL as the dictionary, challenge as the game type.

The second name in each pair should send that person the email address they want to use along with a screen name.

Start this Friday (practice until then) and send me the final scores when you are done. There is no rush, just let your opponent know if you are going to take more than a day between plays. 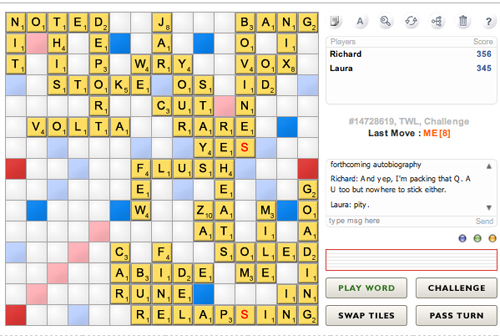 Richard Allen v. Laura Levine
We've got an early return. Richard Allen and Laura Levine have completed what looks to have been a very tight match. With the final scores 356 to 345, Richard moves along to the next round. Congratulations on a good game. 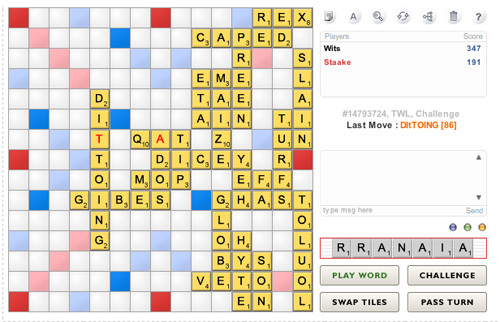 Board as it stood after the last play. .
A little drama with the concession by Bob Staake from his game with Alan Witschonke. 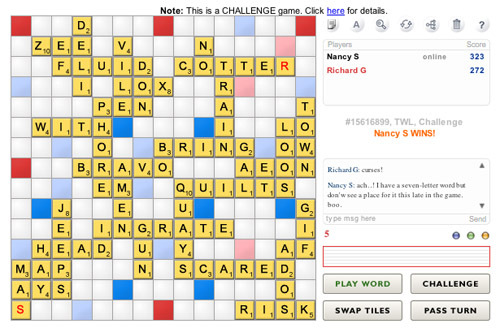 Stahl def. RAG .
RAG and I had begun with Scrabulous but were in the middle of our game when it stopped working. So, we started over using the Facebook portal. After all that turmoil, I came out the victor. Don't look too closely at the board, we have a few unchallenged words that I've looked up since, "phore" by RAG, "gif" by Nancy. 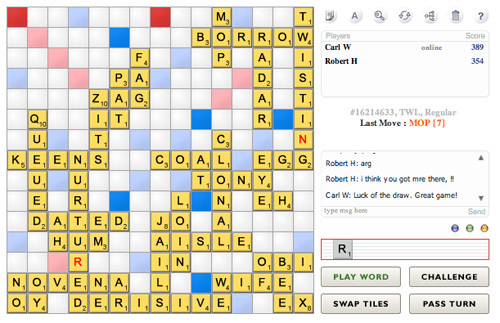 Carl v. Robert H .
We had a substitute in the final first round match, Carl Wiens stepped up to the plate and then hit a homer with a last minute bingo in what had been a neck and neck game with a solid opponent. Congratulations to both players...! 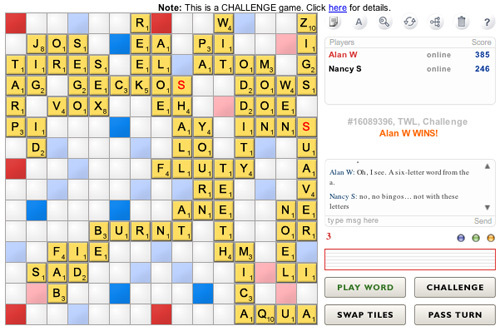 Alan W v. Nancy S
Our first semi-finalist is Alan Witschonke. He kept me off-balance the entire game. It didn't help that in a go-for-broke moment, I attempted a bogus word which was correctly challenged. Congratulations to Alan on a well-played game..! 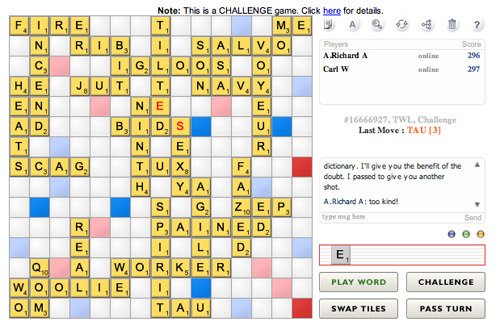 R Allen v. C Wiens
What a squeaker..!! By one single point, we have our other semi-finalist, Carl Wiens. Carl stepped in at the last minute and has been playing like a man with a deadline..!
Topical: Other Things
Latest
Summertime Super Sweetness Recent Stamps Sunday Biz Making Lace for the Met Museum The Sun Sets on the British Empire: maybe not so much Blockhead For John Exploration How I Spent My Summer: Part Deux How I Spent My Summer: Part 1
Topics
Topics
Illustration Knitting Other Things Studio Tour
Archive
Image Galleries
Illustration Postage Stamps Painting Knitting Embroidery Sketchbook Random Photos
© 2023 Nancy Stahl