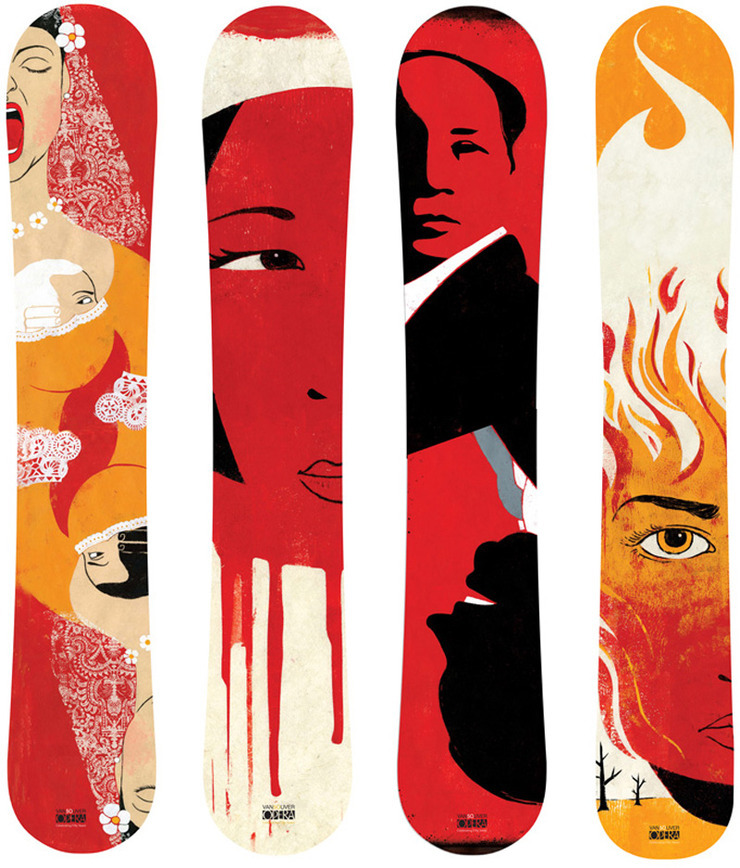 My posters were reworked to fit the new format by the Opera's wonderful designer, Annie Mack.
The staff of The Vancouver Opera invited me to their lovely city last week and I had a great time there.   As part of a benefit for the Opera's educational programs, they came up with the idea of putting my poster artwork on snowboards and auctioning them off.  They planned a nice reception at The Four Seasons with many of their donors where I showed all of the original art, gave a presentation about my poster making process, and signed the season's posters and the snowboards.  I also did a lecture at Emily Carr University along with some newspaper interviews.  I was able to get a great tour of the opera's facilities from Terry Harper, their production director.  Lots of photographs from the trip below.  Articles in the Vancouver Courier here and the Georgia Straight here.  The snowboards will go up for auction on Ebay at the beginning of December.  I wanted to thank everyone at The Vancouver Opera and their benefactors for their generosity, this really was a fun trip.

The snowboard shop photos were taken by Ling Chan from the VO staff.   I wasn't able to make it there, but heard that they were pleased with how it all turned out and might want to work on other snowboard designs in the future, that would be great.

Emily Carr is the main art school in Vancouver, located on Granville Island, an artisans' marketplace near downtown.  Nice facilities and bright, young students.  Annie Mack and Ling Chan, part of the VO staff, arranged the lecture and helped me navigate the city.   Thanks!

Salsa in Vancouver?  Yes.  If there is a Salsa club, I will find it.  They were sooooo good, I was very impressed.  The reggae band and general late night goings on around Granville Street were fun to watch too.

One of the highlights of my trip was seeing the preparation that goes into putting operas together.  I used to design theatre sets back in college and this was a treat.  Tom Wright and Terry Harper went over the details of the design for "Nixon in China" and I learned quite a bit about what goes into producing operas.  Terry gave me a couple of books on the subject and we hope to work together on a set design sometime soon.  He worked with artist Jun Kaneko on the design of this season's "Madame Butterfly".  Terry also took me on a terrific tour of their prop and costume shops, pictures of those below.

On the evening of the Benefactor's reception, I met a nice couple, Craig Tomlinson and Carol Tsuyuki.  It turns out that Craig is one of the few people around that build 17th and 18th century replica harpsichords and pianos, this is his website.  He lends them to the opera for some of their performances, one will be used for this year's "Marriage of Figaro" performance.  Craig offered to take me on a tour of his workshop in West Vancouver and then we headed off to Whistler Mountain, about an hour away.  Great road trip, thanks Craig!