AUGUST 29, 2018
Fifty years ago today the 1968 Democratic Convention ended in Chicago after a bloody riot the night before – some called it a police riot – and the next day, I got a phone call from a start-up satirical magazine called Inkling, asking if I'd do a couple of drawings about it all.

I had never considered myself a caricaturist and outside of lampooning a teacher or two in high school, I had never shown much interest in becoming one. Still, I had been working as a cartoonist since I left high school and at that age I was still tempted to prove I could do anything. So I happily accepted the assignment and set to work immediately. 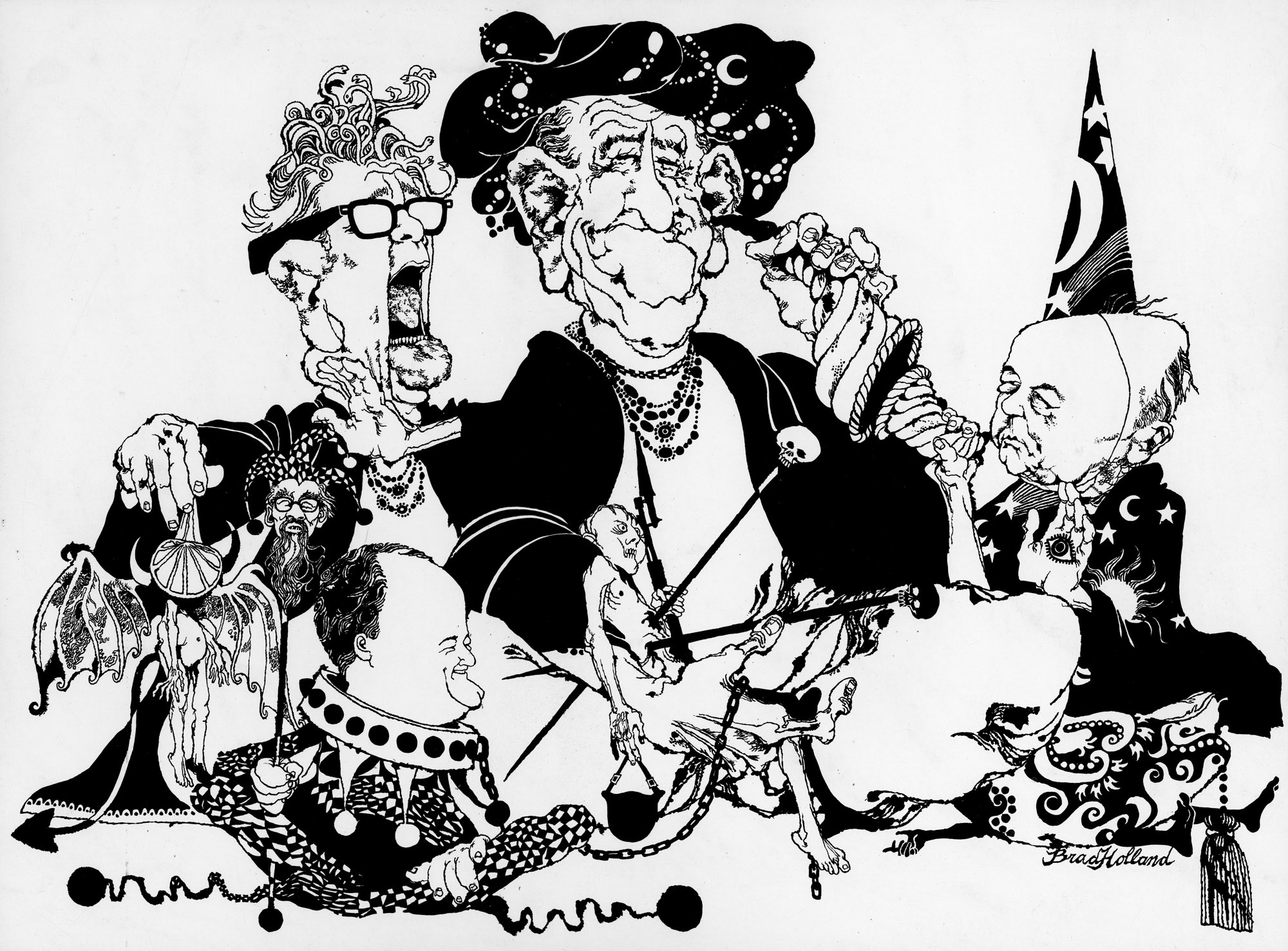 Twelve months earlier I had arrived in New York with a portfolio of black and white drawings and started from scratch on a freelance career. During that first year, I dropped off my samples with art directors and found lots of work. After that, work began to find me. The call from Inkling was a case in point.

I never did learn where the art director, Jean-Claude Suares, first saw my pictures, but he had seen them somewhere. Suares was a cartoonist himself.  I had seen his drawings around, mostly in an Upper West Side weekly, The New York Free Press; and I knew that he had a budding reputation as an all-around promoter of sorts. He had just left the Free Press to take the job at Inkling. It was the first of four publications he was to art direct over the next two years and he was to involve me in three of them.

By the time Suares phoned, I had moved out of the hotel where I had wintered that first year and had been living since May in a walk-up on the Lower East Side: Alphabet City, Eleventh Street and Avenue C. I had already started doing work for Playboy – a double page spread in February –  and had just started work on the Ribald Classics series I was to do every month after that for nearly 20 years.

None of the Playboy work had yet been published, though. Art Paul, the art director, was lining it up for a big launch in December. But my drawings had been appearing in other publications: Evergreen Review, Redbook, Cavalier and elsewhere. Suares had seen some of them somewhere and said he hoped I'd do the work for him in the same style.

The characters in the drawing above are (top row, left to right) Everett Dirksen, in those days Minority Leader of the Senate. Known for his spaghetti hairdo and foghorn speeches, Dirksen was a Republican Senator from Illinois; so I had gotten a good dose of "Ole Ev" during my two years in Chicago. In the middle is Lyndon Johnson, Sultan LBJ, holding an American G.I. voodoo doll and listening with an ear trumpet to Dean Rusk, Secretary of State to both Kennedy and Johnson.

In the front row, the court jester on a leash is Hubert Humphrey, an admirable man brought low by the fortunes of politics to serve as Johnson's Vice President. He had just been nominated to run for President himself against Richard Nixon, although in the process his party had essentially torn itself apart.

The head on the marotte Humphrey is holding is Ho Chi Minh, President of North Vietnam. The context for the drawing is, of course, the Vietnamese War, still raging in '68 and along with Civil Rights, dominating every discussion about electoral politics that year. 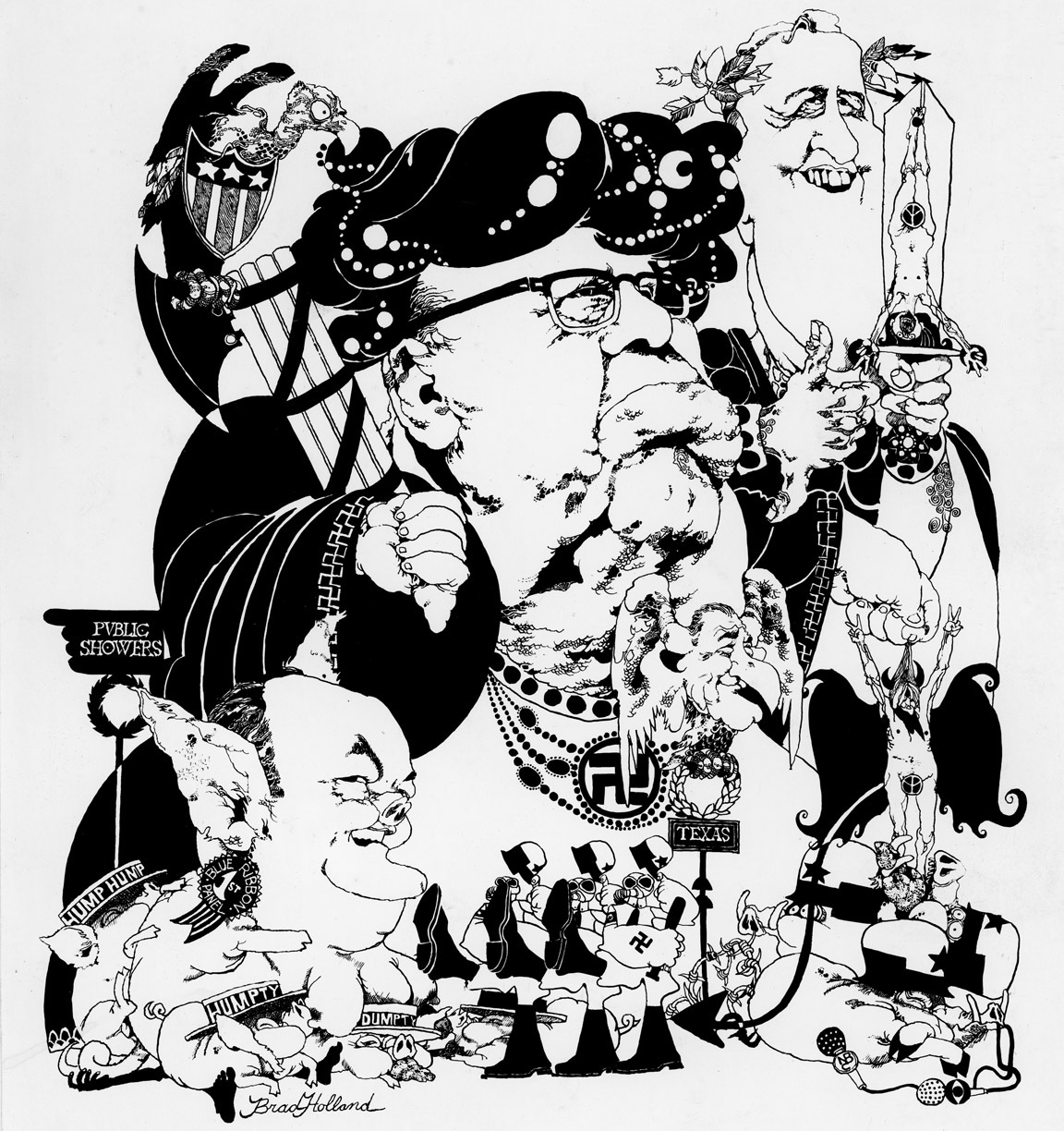 The convention that had just ended had itself been a caricature waiting to happen. In April of '68, Martin King had been assassinated and in June, Bobby Kennedy. The unpopular Johnson, reeling from the divisions within his party that the war had opened, had announced in the spring that he wouldn't run for president for a second full term.

So, in addition to the usual cast of political hustlers gathered in Chicago that sultry week in August, an army of self-styled "Yippees”  had descended on the city’s parks to compete with the delegates for television time. Their special PR stunt was to "nominate" a 150 pound pig for president. The pig's name, they told the press, was Pigasus.

In this drawing, the chief figures in the tragic farce are four. In the middle, the swami holding the fasces and giving the thumbs-down sign is Richard J. Daley, in those days Chicago's seeming Mayor-for-Life. When I lived briefly in the Windy City, his name had been on trash cans everywhere: "Keep Your City Clean, Richard J. Daley, Mayor."

Now after years of lusting to host a Democratic convention to show off his clean city, outside on the streets it was all turning to dust. On camera the night of the balloting, Daley had been seen to holler "Fuck You, you Jew" to Senator Abraham Rubicoff of Connecticut, who had just gone off-script in his nominating speech to denounce Daley and his police for their "Gestapo tactics" toward the demonstrators.

Behind Daley, the "I'm for it and against it" Vice Presidential nominee is Senator Ed Muskie of Maine, another decent man who might well have beat Nixon that year if he had been running on his own, but  who was stuck playing second fiddle in the race to the damaged Humphrey, and by extension to the more fatally-damaged LBJ.

In the front row of the drawing, of course, is the hapless Humphrey again, this time conflated with Pigasus. And overseeing the Texas Delegation standard, with his hawk nose and winged ears, is "Landslide Lyndon." 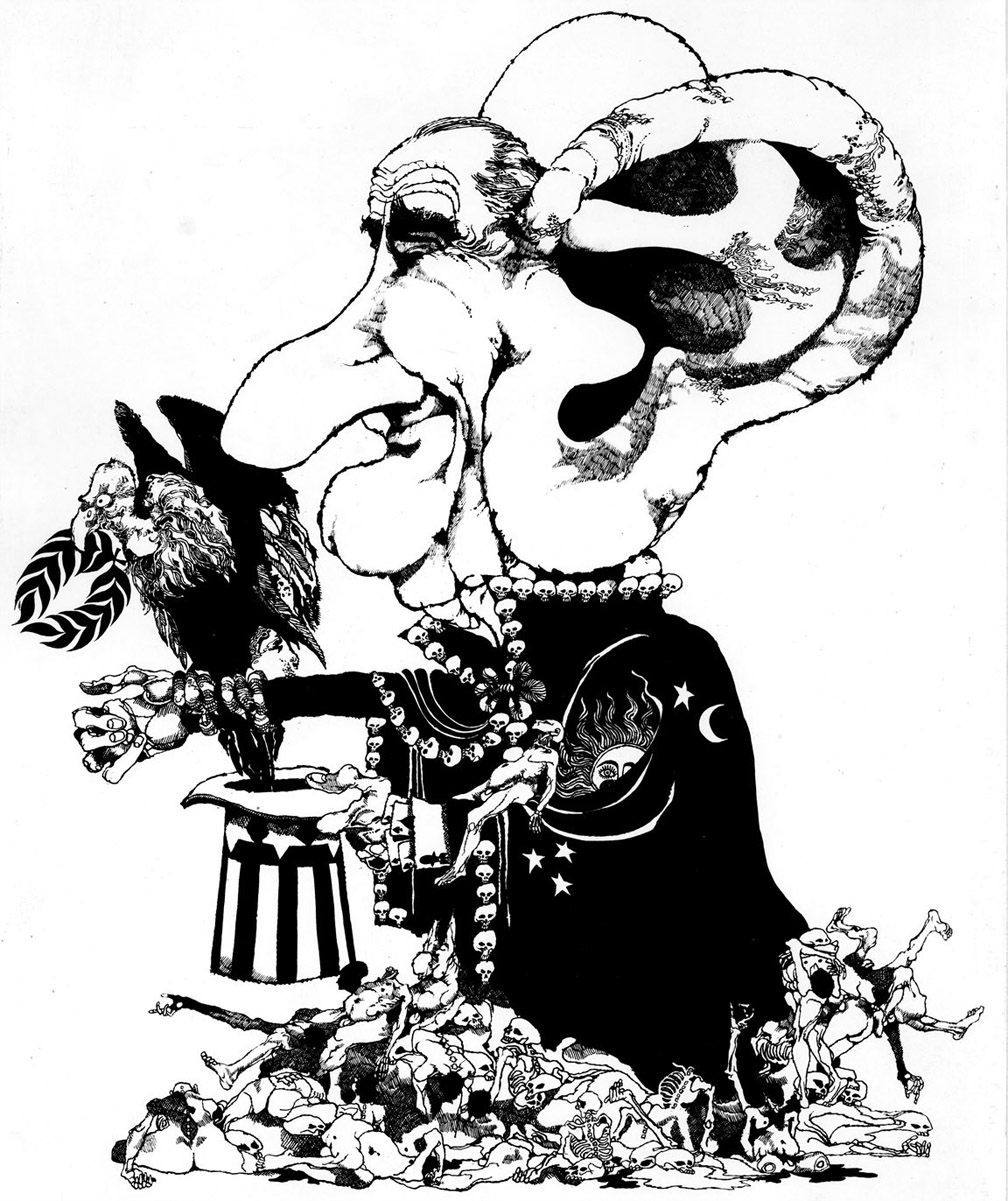 When I was finished with the drawings, I delivered them myself to the Inkling office in the Empire State Building. It was my first visit ever to that famous landmark and my first meeting with Suares. He had already started to collect art for the first issue and showed me a number of pieces. It was going to be a magazine of art-only he said.

Then he asked if I wanted to see his cars, and without waiting for an answer, he opened his desk drawer and took out a bunch of 8 X 10 glossies. "Nice cars," I said helplessly, looking through them while he told me how expensive they were. All artists, I later learned, on meeting J-C, got to see his cars.

I never did see the first issue of Inkling and I've always suspected there never was one. Whatever its fate, Inkling disappeared without a trace. That's why I decided to post these drawings. After 50 years, it's probably the first time anyone's ever seen them.

Suares never disappeared though. He phoned again a year or so later. He was art directing another start-up, this time a muckraking journal called Scanlon's Monthly.

I did a couple of drawings for Scanlon's, although by then, my style was already mutating. My year on the Lower East Side had proved to be the kind of education you don't get in art school and I was striving now to strip my work of anything that was merely decorative or picturesque.

Wikipedia says Scanlon's "ran from March 1970 to January 1971". Eight issues; that's about what I recall.

Before it folded, however, Suares had migrated again, at first taking over (from Steve Heller) the art direction of a weekly sex tabloid, Screw; then improbably popping up out of a rabbit hole at The New York Times.

It turned out that the Times too was starting a start-up and they were looking for artists who had a different approach to doing political art. Suares had told them he knew the right artists. The Times start-up was going to be called the Op-Ed Page.